In 1884 the decision was made to finally comply with the standard colour requirements of the Universal Postal Union. Thus it was necessary to issue a new series of stamps that incorporated the required changes. The only value that did not require a colour change, was the 1/- orange, and so it remained orange until the bicoloured Third Crown CA Issue of 1887-1903 replaced it.

Several new denominations appeared in this series. Some of these, like the new halfpenny value, along with the 1d value continued to to be used indefinitely, and were still in use when the Edward VII issues replaced the Queen Victoria Issues in 1903. Others like the 2/6, 5/- and 10/- stamps had a very short life of only six months or so. They are among the rarest stamps of the colony, having had extremely small printings.

The new series consisted of 9 values, which were supplied over a period from July 1884, until December 1886. As the halfpenny and 1d stamps continued to be used in the 1887-1903 series, the next series of posts will attempt to identify the printings of these stamps that were made before 1887. 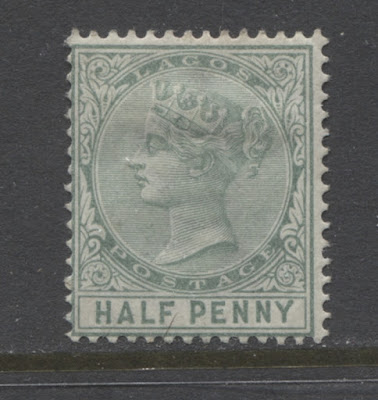 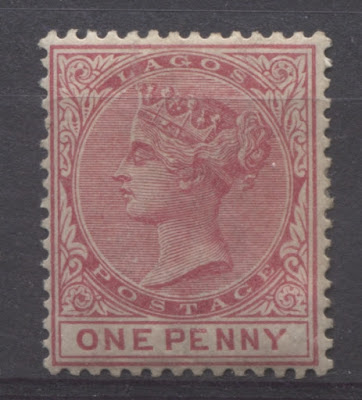 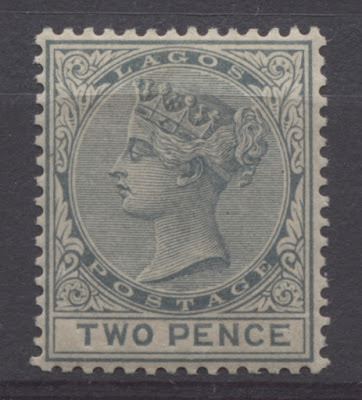 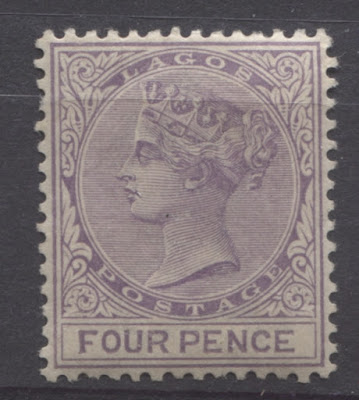 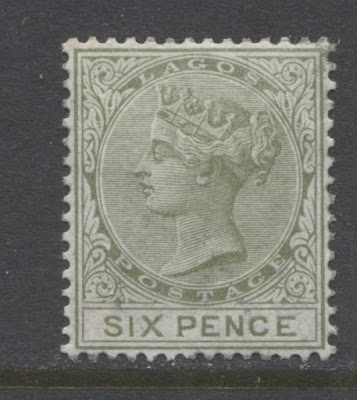 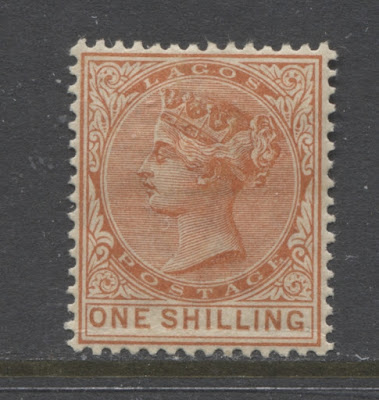 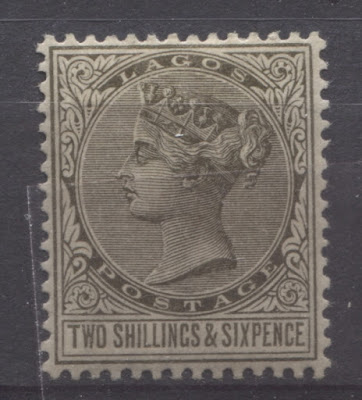 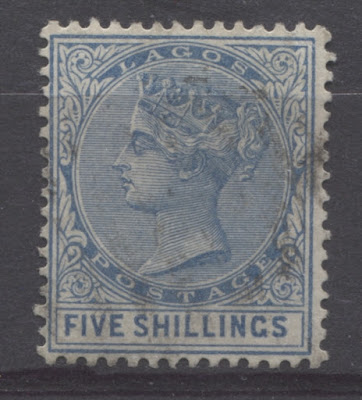 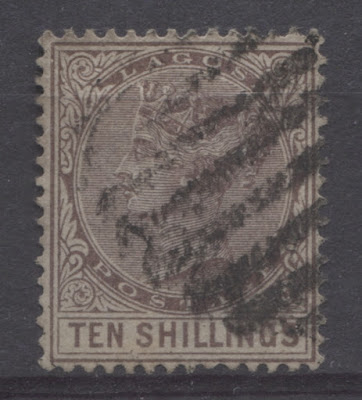 The remainder of this post will look at some of the broad aspects of this issue. In later posts, I will go through each value and attempt to identify the characteristics of the various printings of the halfpenny through 1/- values.

All values of this series exist with the above type of specimen overprint. However, the high values shown are the only ones that most collectors can hope to acquire, as the others are either unique, or there are only 2 or three known of each. In any event, the high values shown above are rarities by virtually any collector's definition.
It is reported that the halfpenny and 1d exist with manuscript diagonal specimen overprint. However, the authenticity of them has been in doubt because there  were no examples in the De La Rue collection.  Also, it was reported that 400 of the 1d stamps from the March 1887 dispatch were overprinted in the same style as above. However because no examples have come up for sale in recent years, the existence of these remains unconfirmed.
Forgeries
The three high values have been forged by Sperati on genuine watermarked paper. They are of extremely high quality and are very dangerous forgeries. I have two examples in my stock, one of the 2/6d, and one of the 10/-.
The scans below show the genuine stamp on the left, and the forgery on the right: 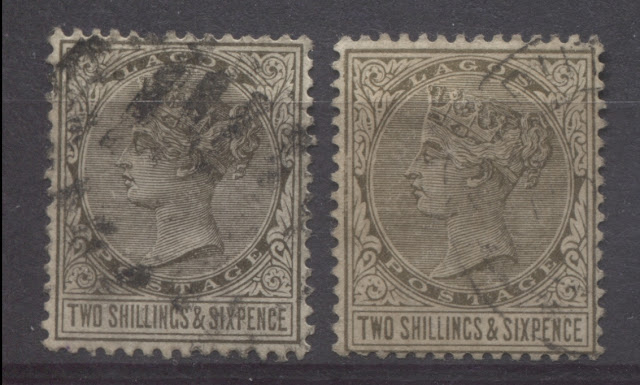 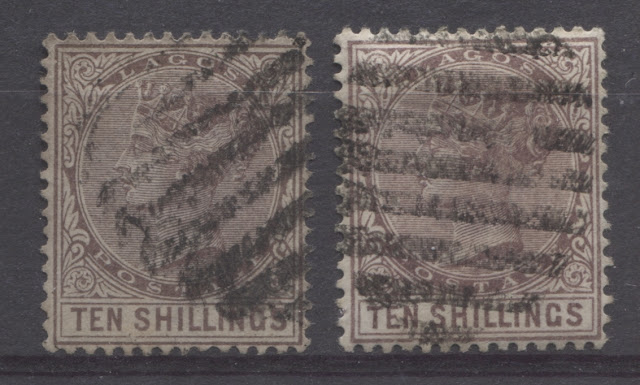 This one is much harder to detect, and generally UV is the best way to detect it. The genuine stamp will appear deep purple under UV, whereas the forgery is pale purple. Also, if you look at the design with a 10x loupe, the lines of the forgery appear rough, whereas the lines of the genuine stamp appear smooth and solid.
Under UV the genuine 5/- is blue, whereas the forgery is Prussian (greenish) blue.
There are also poor lithographed Panelli forgeries of the 6d through 10/- values. The watermark is forged by impressing it into the paper, and the colours are too light.
Proofs 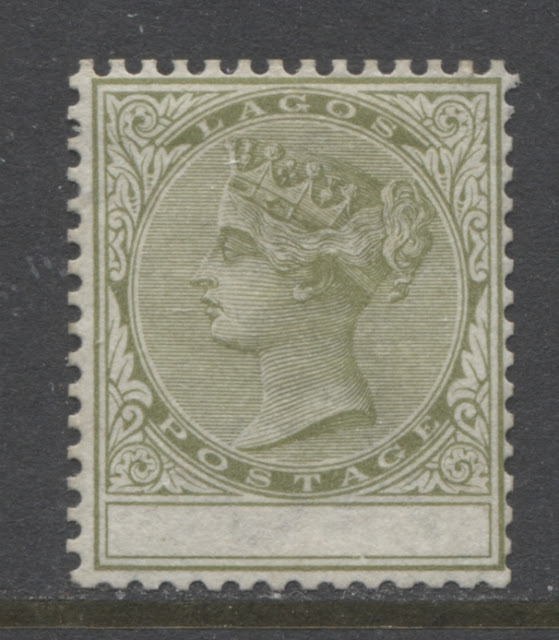 The above is a proof of the 6d value that is missing the value, and was sold in the 1971 Danson sale. It shows a frame break on the value tablet frame below the "A" of postage. This is a constant flaw as I have seen it on other examples of the 6d.
Proofs are all very rare to unique, and in addition to the above, the following items are known:
Colour Trials
There are a small number of very rare colour trial items from this issue, that can be summarized as follows:
1. A trial with a green head plate and either a mauve brown or a blue duty plate exists on unwatermarked paper, perf. 14.
2. Trials with a lilac head plate, that have either black, mauve, purple, green and blue duty plates exist on unwatermarked paper, perf. 14.
3. A halfpenny proof perf. 14 on unwatermarked paper exists with the value in black instead of dark green.
4. A sheet dated "Aug. 28/83" marked "Existing Proposed  Schemes of Colours" exists. This sheet shows the 1d to 1/- in the 1874-1875 colours, and labelled "Existing Colours", the 3d and 1/- are marked "This colour cannot be improved upon" with overlap bearing designs for the 1d in red marked "Proposed colour being that established by the international postal convention for this duty"; the 2d in grey, the 4d pale violet and the 6d olive green. All these last designs are marked "proposed colour", and all of these designs have a blank value tablet.
5. The halfpenny green exists as issued, but on unwatermarked paper.
6. There exists a piece measuring 167 mm x 243 mm, dated "Feb. 14 '87". It bears a perforated specimen of the 1/2d green, and a second specimen overprinted in black. The first specimen is apparently on crown CA paper, while the overprinted specimen is on unwatermarked paper.
Other Varieties
There are a number of constant duty plate flaws that I have identified on earlier issues that continue, uncorrected into this issue:
1. The 1d exists with the truncated "n" in "Penny"
2. The 2d exists the the damaged "T" of "Two", in which the stem of the "T" contains a large white bubble.
3. The 6d exists with a frame break on the value tablet frame just under the "A" of "Postage".
The 1d and 4d are known with watermark inverted, and both the 1d and 2d are known with value omitted.
Multiples
Although blocks are scarce on the 1887-1903 issue, they are very scarce on this issue. I have to date, only seen a small handful of blocks, all of which I show you below: 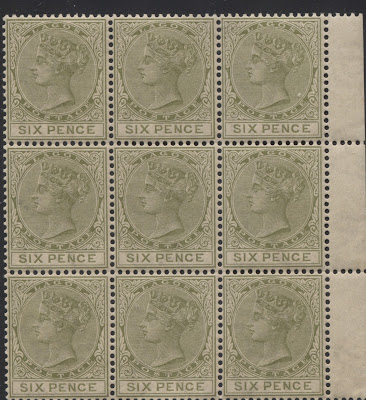 A beautiful block of 9 of the 6d from an early printing, in the paler shade. 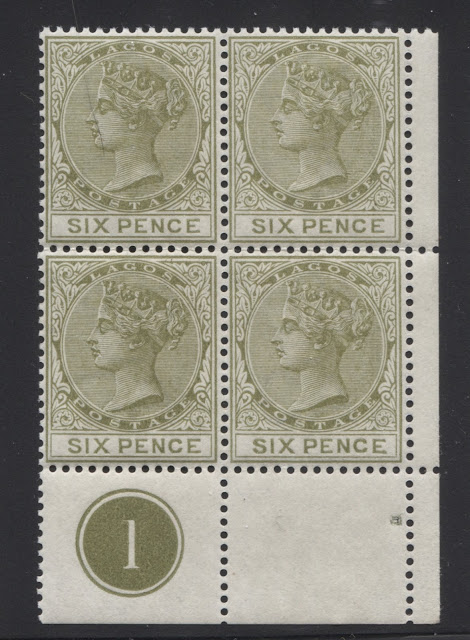 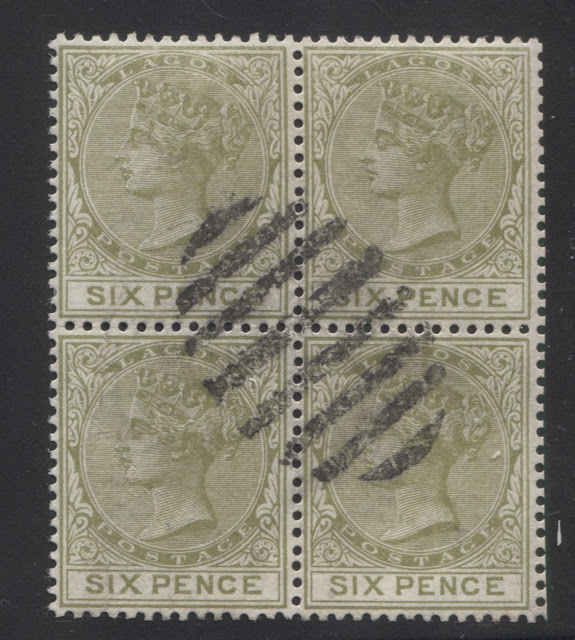 This is a superb postally used block of 4 cancelled with a complete strike of an 8-bar oval killer. Postally used examples of this value are worth more than mint by a factor of 8:1, so a block like this is a real prize. 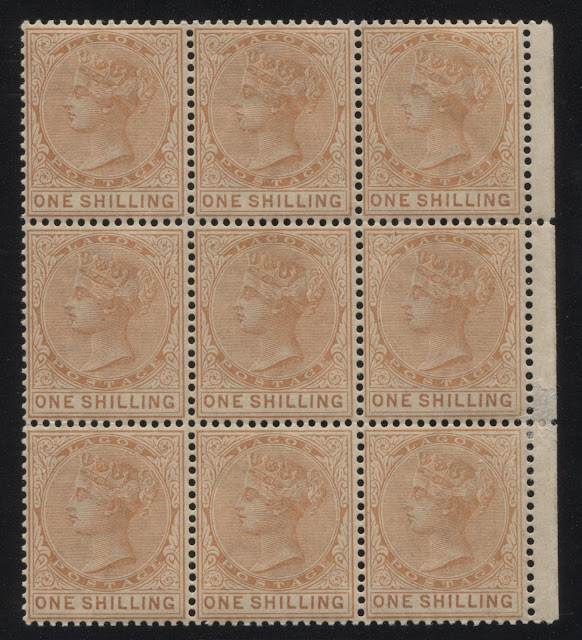 A lovely block of 9 of an early printing of the 1/- in a dull orange shade. 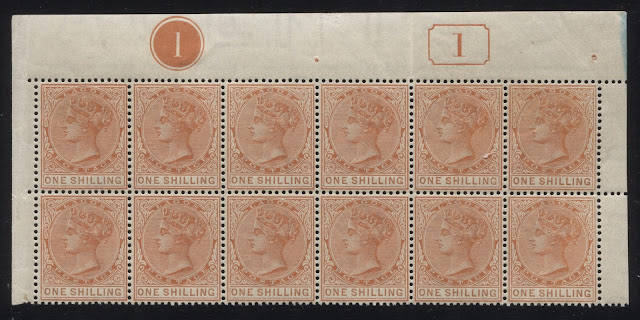 And now for the best piece in my stock: a top sheet margin block of 12 showing both the current number, and the plate number of the 1/- in a deep, rich shade of orange.
This concludes my overview of this issue. Next week, I will begin looking at the printings in greater detail, starting with the 6d value, and the 1/- values, as they both have the same number of printings, released on the same dates. So they should have similar characteristics, which I can then use to help sort the 1d, 2d and 4d values. Then, and only then, can I sort the halfpenny value.