Probably no topic causes more confusion for collectors than the study of paper fluorescence. Many feel that there is too much subjectivity involved in evaluating and studying paper fluorescence and there is a tremendous amount of inconsistency among the stamps listed in Unitrade. Indeed many of the stamps listed are described as having the same degree of fluorescence, but appear completely different under the UV lamp. This makes positive identification of single stamps next to impossible for those unfamiliar with the papers, unless the varieties are unmistakably obvious.

This article will attempt to explain why this confusion arises and break the topic down into more manageable components, so that you will be able to see that the study of paper fluorescence is not impossibly complex. Please note that this is the complicated, more advanced article on this topic. If you have never studied paper fluorescence before, or you do not wish to get too far into detail, then it is recommended that you read the basic version of this article here.

The Cause of Confusion and Basic Grades of Fluorescence

The subject of paper fluorescence is confusing because many of the papers used contain fibres in varying densities that react differently to the UV lamp than the main paper. In addition, the use of paper coatings in the early 1970's has resulted in many papers that give different reactions on the face of the paper from the back.

To begin with it is important to understand the basic levels of fluorescence and what they look like:

The Centennial specialists Irwin, Keane and Hughes came up with a 0-12 point brightness scale in the early 1970's. The numbers next to each grade represent where on the scale the grade falls. Dead paper either appears dark violet, dark brown, dark grey, or dark blue grey under the UV lamp. There is no bluish white or white glow whatsoever. This paper absorbs light and reflects none. True dead paper prior to the early 1990's is rarely seen. Much more common is NF paper. The stamp on the left is printed on dead paper.

NF paper appears a lighter brown, lighter grey, lighter blue grey or lighter purple. Again it absorbs almost all light gives off very little glow at all. The main difference between NF and dead paper is in the depth of colour that the viewer sees. The stamp in the centre is NF.

DF paper is the most common paper type prior to the Centennial issue. This paper type varies quite a bit in colour under UV, but generally, it gives off a very dull, bluish, greyish, light violet, ivory or greyish white appearance. It will not have the brownish or violet appearance of the NF or dead papers. It will not appear to be at all fluorescent, but compared to the above 2 types it looks quite a bit brighter. The stamp on the right is DF.

It is important to note that fluorescence refers to the brightness of the reflected light, not the colour. DF paper can come in several different types, each of which reflects a different colour under UV:

These are some of the colours I have seen. The difficulty for the average collector is that it is very easy to mistake the bluish white or greyish white DF paper with fluorescent paper if the person has never seen true fluorescent paper. This is especially the case if you are used to seeing NF paper. Now here in this picture the stamp on the left looks just as dull as the stamp on DF paper did in the previous example. But that is because it has been placed next to a stamp on medium fluorescent paper. So, it appears greyish by comparison. MF paper appears almost exclusively bluish white, though it is not especially bright, but does not contain any brown, violet or grey. The stamp on the right is printed on medium fluorescent paper. The brightest paper is of course hibrite. It is always a bright, bluish white colour. The picture below shows two stamps that are printed on HB paper, each of a slightly different brightness level: True hibrite paper is quite unmistakable in its appearance. Once you have seen it, there is no confusing it with any of the other grades of fluorescence.

Fluorescent Fibres In The Paper and Naming Convention

What complicates the picture is that in addition to the basic grade of the paper, there are often found, fibres which show a different level of fluorescence from the overall paper. These fibres can be very dense, to the point where you can barely see individual fibres, right down to very few, where there are only 1-5 fibres visible on the entire stamp. Often these fibres can fool collectors into thinking that a paper is more fluorescent than it actually is. The pictures below show some stamps with different densities of fluorescent fibres, of varying brightness in the paper: This paper is a non-fluorescent paper that contains a sparse concentration of low fluorescent fibres. As you can see the brighter fibres are evenly spread throughout the paper, with large 2-3 mm gaps where there are no fibres. Here, we have a stamp on high fluorescent paper, that contains a medium density concentration of high fluorescent fibres. With this density, you can still see the individual fibres, but the spaces between the fibres are less than 1 mm.

To deal with this, I have devised a naming convention as follows:

(basic fluorescence-fl, fluorescence of the fibres in the paper, concentration of said fibres)

So a stamp that had a basic fluorescence of DF, that has a high concentration of low fluorescent fibres would be abbreviated as follows:

Now it is the case that some stamp papers contain more than one grade of fluorescent fibre, as explained above. This explains situations where you have two stamps with fibres that appear to have the same overall fluorescence, but look different when you compare them to one another. To name these varieties, I simply add another two sets of initials for the second type for fibre, and more sets for each type of fibre present in the paper. So for example, a DF paper that contains a low density of LF fibres and a sparse concentration of MF fibres would be named as follows:

Paper Coatings, Different Readings on Front and Back and Impact on The Naming Convention

With the advent of chalk coatings that began to be added to papers starting in 1970, the subject of paper fluorescence becomes much more complicated because often the reaction of the front of the stamp will differ from the back. The pictures below illustrate this for the 25c Polar Bears definitive from 1976: 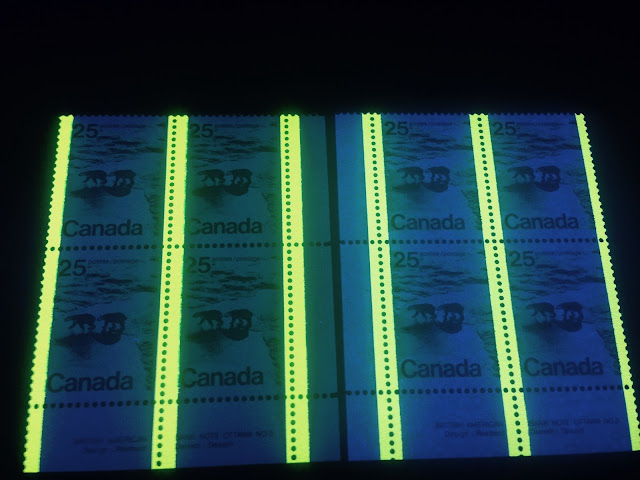 However, when viewed from the back, these papers look completely different, in terms of their fluorescence level: 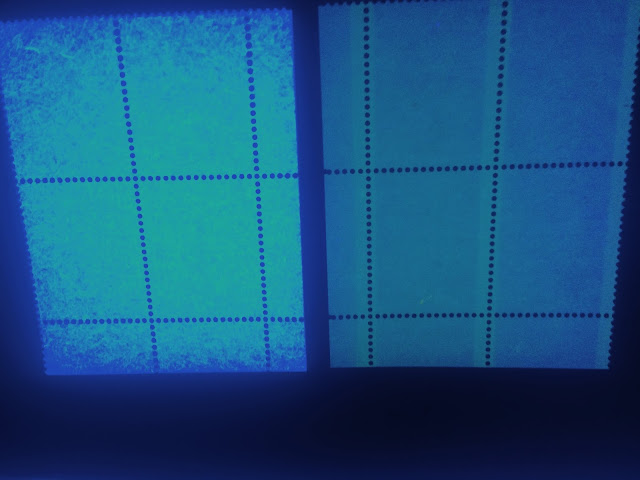 So these two blocks would be named as follows:

The left block in the first picture would be: NF/DF

What is interesting here is that the second block actually has two different types of fibres, only one of which can be seen from the front. The reason I know there are two is that on the back the overall density appears to be MD. But then looking at the front there is a lot of space consistent with MD. The reason for this difference is that the MF fibres that are visible from the back are not bright enough to show through the front. If there is only one type of fibre present, then the concentration will either be the same on the front and back, or visible on the back only, but not the front.

Finally, there also exists a chalk-surfaced paper during the 1972-1976 period which comes with either a smooth surface, a distinct vertical ribbed surface and a distinct horizontal ribbed surface. The reactions of this paper under UV light are quite varied, but there is a DF paper which shows very clear woodpulp fibres on the back under UV. The descriptions of these stamps will include the initials WP for the word "woodpulp" after the initials describing the paper fluorescence.

The picture below shows an example of this paper type on the 1972 Plains Indians issue: If you look toward the top of the picture you can see dark fibres. Those are the woodpulp fibres. Rather than show up brighter under UV, they show up darker, and are only visible under the UV lamp.

I recognize that this is very complicated and may appear at first to be too complicated to be workable. However, I believe breaking it down like this will take much of the subjectivity out of the study of paper fluorescence and introduce a bit more objectivity. Like anything, it simply takes practice in applying it to become comfortable with it. 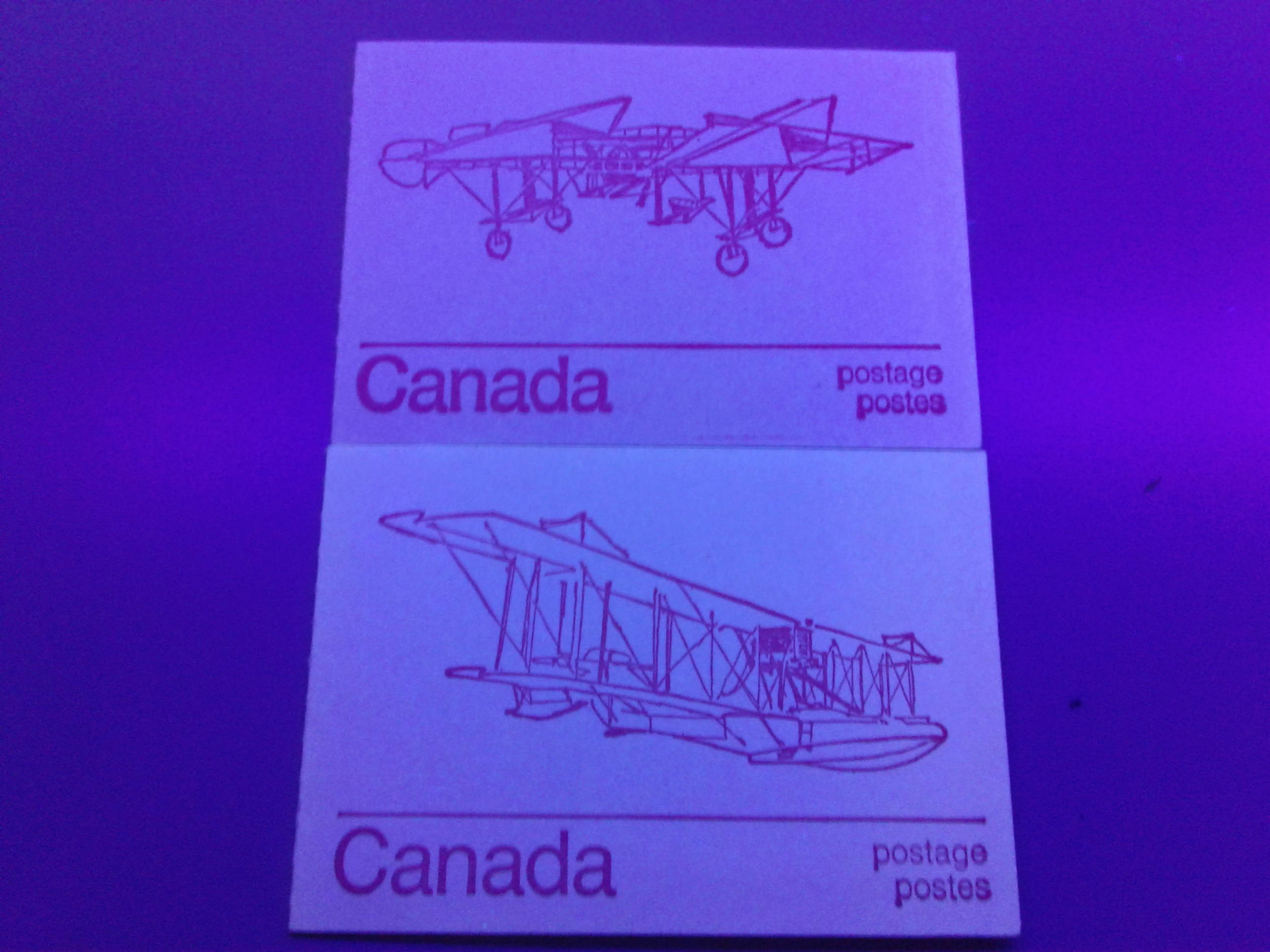 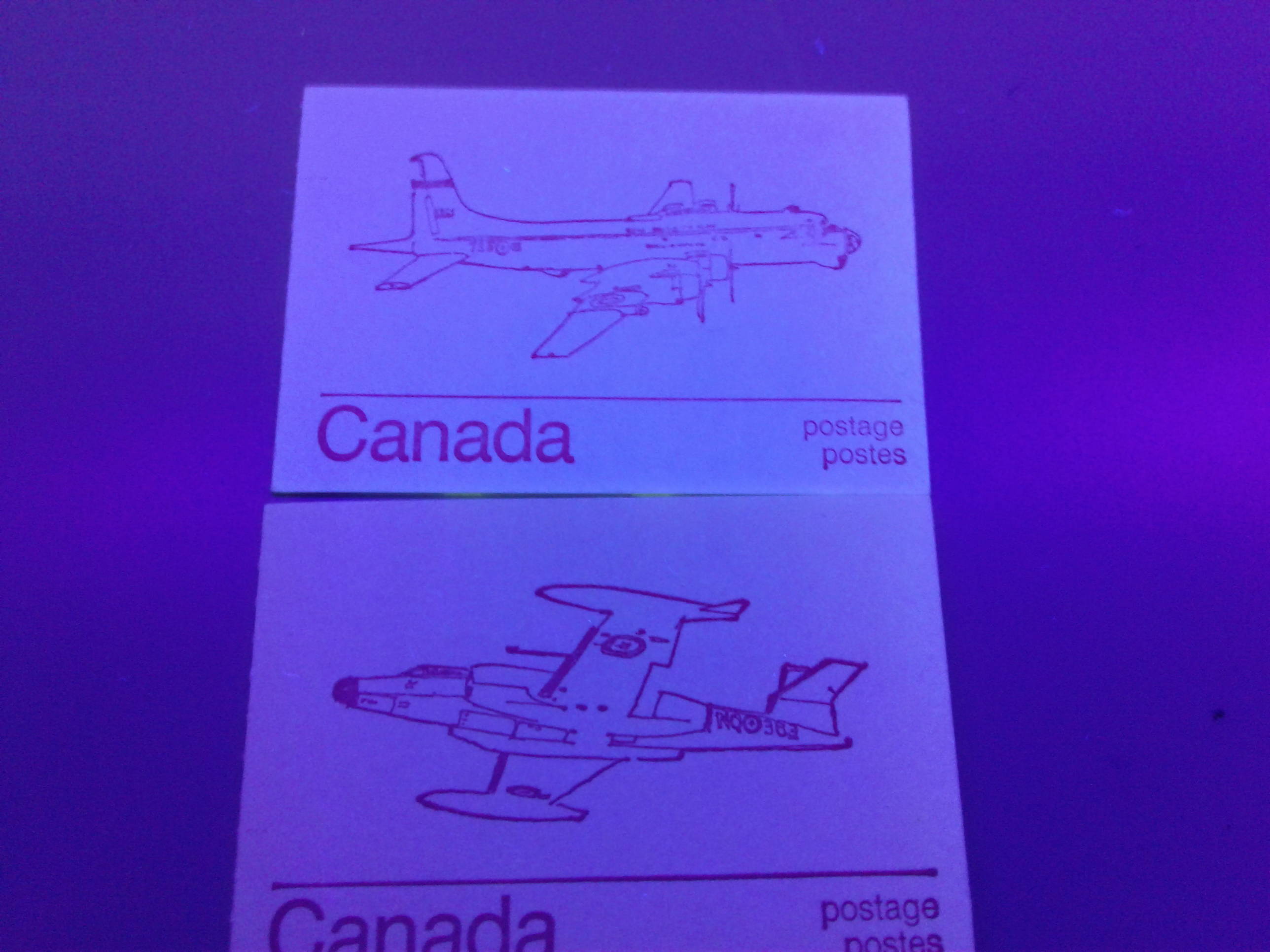 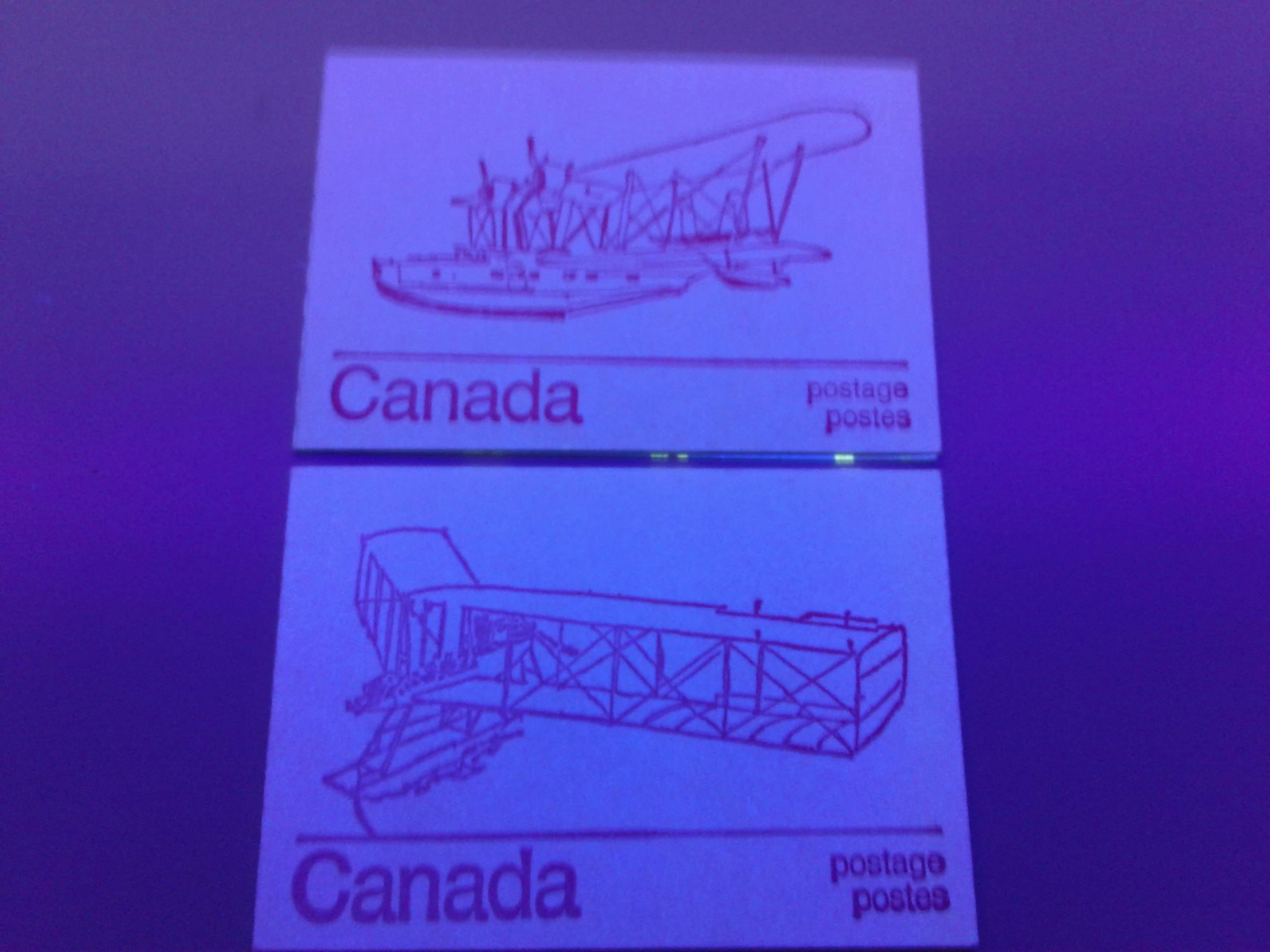 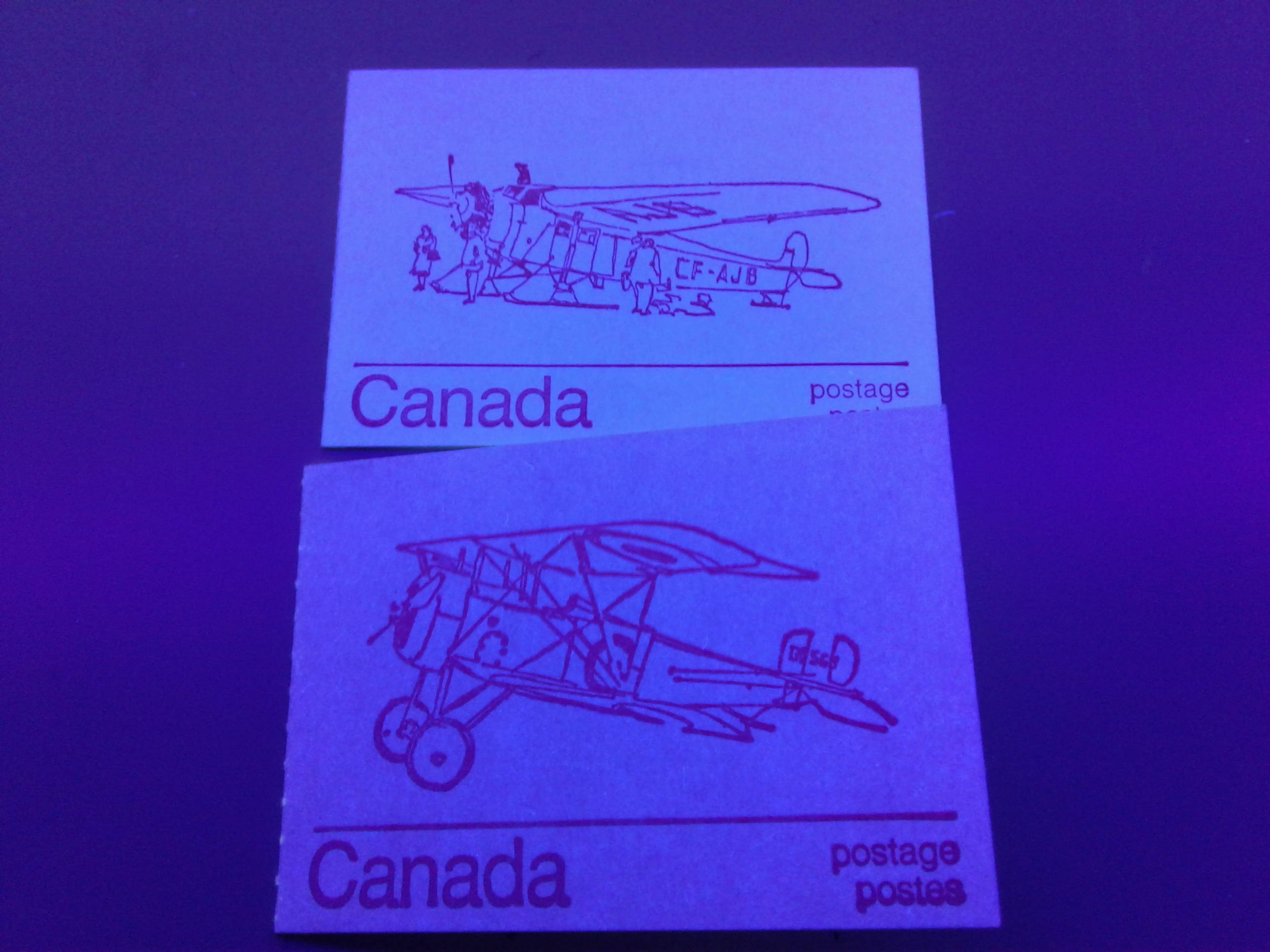 Here we have medium and high fluorescent covers. Medium fluorescent is of course shown on the bottom, and covers a wider range on the Irwin scale than high fluorescent. Generally high fluorescent paper appears extremely bright bluish white, and without experience with hibrite paper it is easy to misidentify it as hibrite. However, when compared next to a true hibrite paper, the difference is quite striking still: 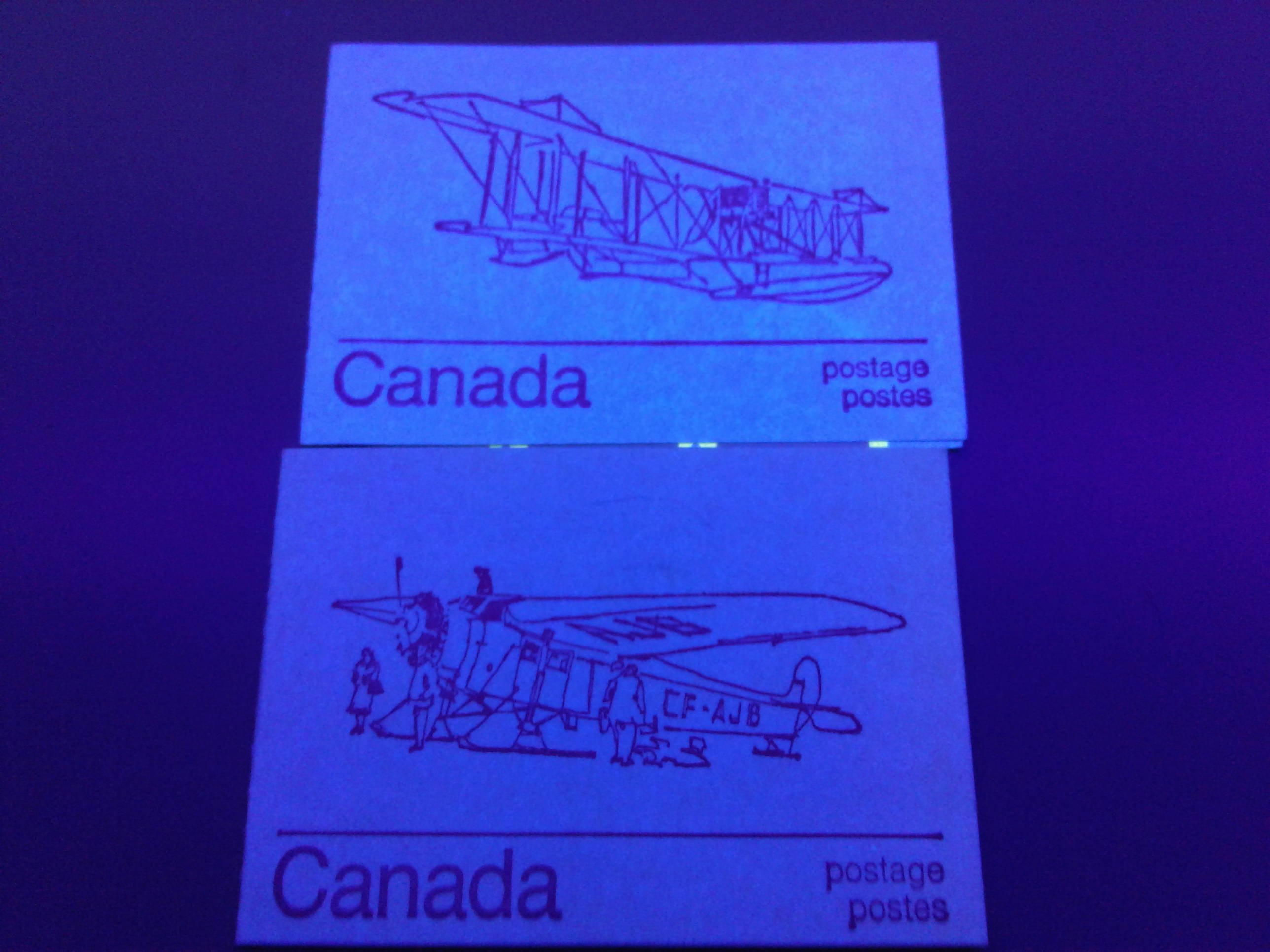 Here, the high fluorescent cover is shown on the bottom of the picture and it is hard to believe that it is the same cover as the one in the picture immediately above. Hibrite paper covers a range of two levels on the Irwin scale, levels 11 and 12. So it is common to come across two different, though very similar levels of brightness when working with hibrite paper.

Now, just for fun, here is a comparison shot of the hibrite paper next to the non-fluorescent paper on this booklet: 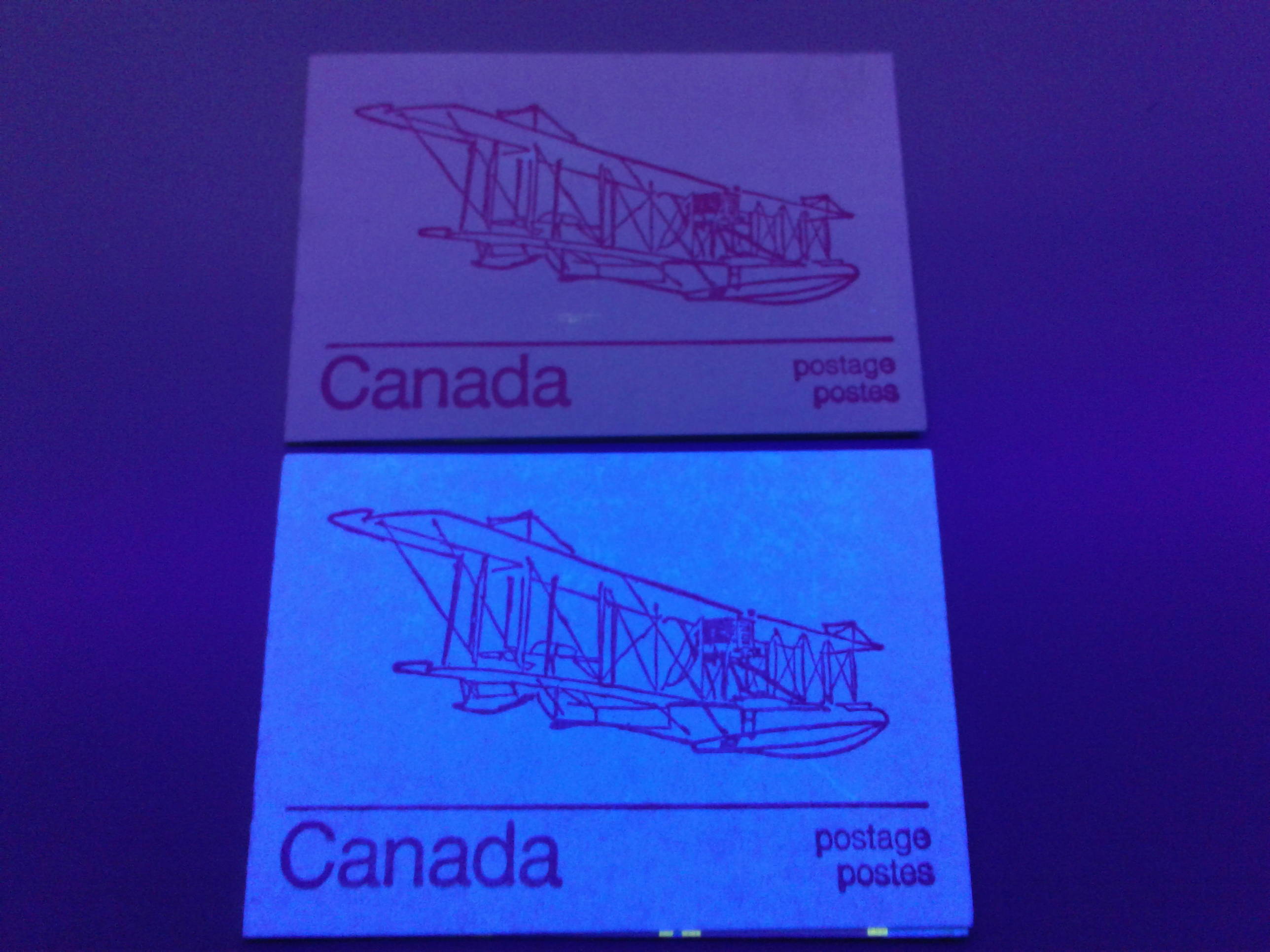 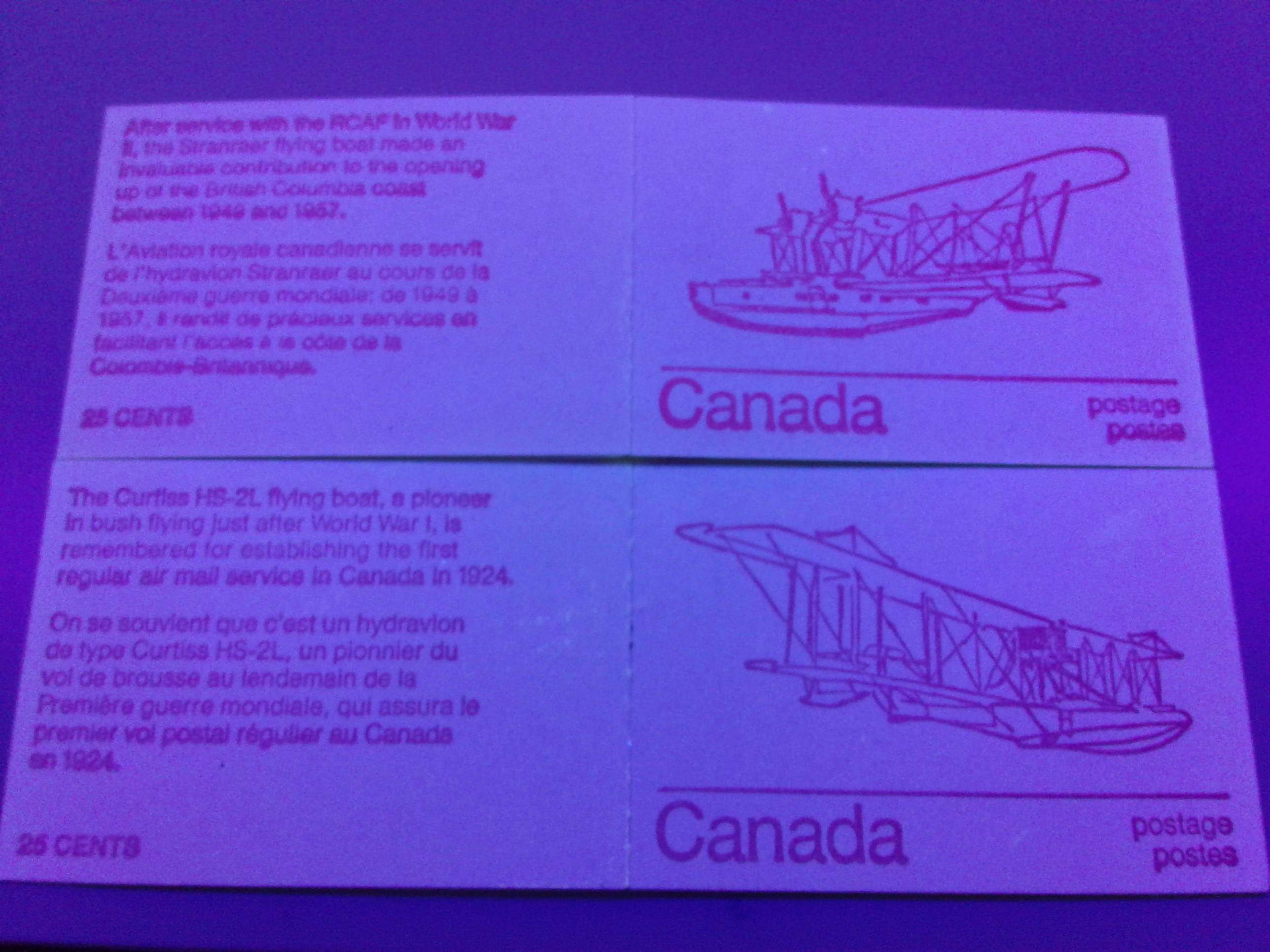 The cover at the top is printed in a fluorescent ink that glows orange-red under UV light, while the booklet at the bottom shows the normal non-fluorescent ink.