Understanding Colour and Correct Use of a Colour Key

Before you get into studying shades on stamps it is useful to understand the subject of colour as it relates to philately in general. The issue of colour is perceived by philatelists to be highly subjective and individualistic, not to mention confusing. One of the biggest problems in the hobby is that terminology is used very loosely, with very specific words being used as though they are synonyms, when in reality they mean very different things. For example, a dark colour and a deep colour are not the same thing at all, even though they sound the same. Yet many collectors will use these terms interchangeably. In addition, most listings in the standard postage stamp catalogues use words that are far too general to describe colour, such as "green", or they use culturally loaded terms like "Indian red" and "Pigeon Blood Pink", which are just about useless for identification unless you know what the exact colour looks like.

The result of all this confusion is either a large number of completely mis-identified stamps, or no attempt made at all to correctly identify shades, with dealers and collectors alike opting to just assume that they have the "cheapest shade". My hope in writing this article is to show you that with a proper understanding of the language of colour and the proper use of a standard colour key, such as the Stanley Gibbons colour key, you will be able to confidently identify colour with much more objectivity than you may have thought possible.

Correct Use of Colour Terms: Hue, Saturation and Value

A hue is simply a name given to a pure colour such as "red", or a combination of pure colours such as orange-red. This is the first area in which collectors use terms interchangeably when they mean different things. Most often collectors will refer to the "shades" of colour on a stamp issue. However the term "shade" is actually a specific term that refers to the value of a colour, as I will explain below. Some of the colours found on a stamp issue will be shades in the truest sense of the word, but some, as we shall see are pure hues as well.

The second area of confusion when it comes to hue is the interpretation of compound colour names such as red-orange and orange-red. Many people will use these names interchangeably, when they refer to completely different hues. The correct way to interpret these names is to understand that the second colour in the name is always the predominant colour, while the first colour is the modifying colour. So:

Saturation refers to how pure a hue of colour is. It is a measure of a colour's intensity. The concept of saturation includes the following commonly used terms:

At one end of the scale are the pure chroma hues that are fully saturated. For colours that are naturally fully illuminated and vivid, we call those "bright". Colours that are not illuminated, but are pure in terms of intensity are usually termed either "intense" or "deep". A colour can be either of these two extremes:

It is important to note that the illumination does not come from the addition of white to the colour: it is a pure hue with nothing added.

At the other end of the scale are those colours that are de-saturated and appear duller or washed out. Such colours are called "dull", or "pale". Again, the dullness can come either from a lack of saturation, or from the addition of grey to the colour. However, the proper term for a colour which has had grey added is a "tone" of the colour.

Soft colours are usually either pale or dull.

Another set of terms that we often see in the philatelic literature, particularly in the Stanley Gibbons catalogues are warm versus cold shades.

Warm colours are those that contain a yellow, red or orange undertone. An example of a warm red colour is scarlet. Scarlet contains a hint of orange usually.

Cool colours in contrast are those that contain a blue undertone, or which simply lack the yellowish undertone of warm colours. An example of a cold red is Carmine. Carmine is a red that always has a bluish undertone.

So occasionally, you will see a reference to a colour being warmer, or cooler. When you see that think about whether it has more of a yellowish undertone versus a bluish one.

The Stanley Gibbons Colour Key and Learning to Use it Properly 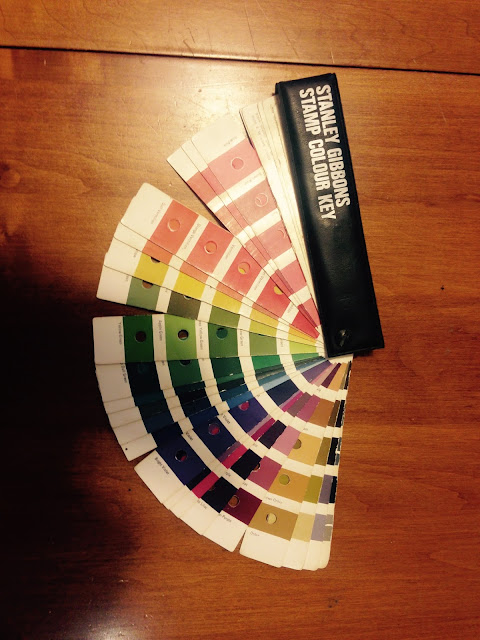 This picture shows the Stanley Gibbons Colour Key that I have owned for the last 35 years. It is my oldest surviving possession in fact. Given to me on my 9th birthday and still in reasonably good shape, except for the last swatches, which are a bit tattered.

For most of those last 35 years, I did not properly understand how to use this wonderful accessory because I would try to match a stamp up to a swatch exactly, which seldom works. For one, there are only some 200 colours represented and seldom will your colour match any of the swatches exactly. Secondly, if you look too closely at a stamp next to the swatch, you eye can fool you into thinking that you have a match when you don't.

I find that the best way to use the colour key is to hold the stamp and the key at a reasonable distance from the eyes and compare them with a relaxed glance. If you do this, you will see fairly clearly, which swatch you stamp is closest to. Then, using your understanding of the above colour terminology, you can mentally interpolate what would have to be done to the colour in the swatch to change it to the colour on your stamp. You can mentally add grey, black or white to make the colour dull, dark or light, or you can increase or decrease the saturation level, depending on how closely the pure colour matches that of the swatch.

Doing this can yield some interesting results and it becomes pretty clear that most of the colour names used in the stamp catalogues are not even close to those that result from using the colour key in this manner. However, while this method is more objective, there is still some subjectivity involved, as different people perceive the same colours differently depending on the makeup of rods and cones on their retinas. However, using the colour key in this manner to identify shades gives you a reasonable chance at an accurate identification without having to be a specialist in the particular issue and without having to have several dozen or even hundreds of comparison copies on hand.