The Printings of the 7.5d Lilac and Carmine Queen Victoria Keyplate Stamp From Lagos 1894-1901

Today's post continues my examination of the three stamps issued in 1894 by Lagos to facilitate payment of insurance charges on registered parcels: the 5d, 7.5d and 10d. Last week we looked at the 5d lilac and dark green and concluded that there were approximately 18 printings. Given that only 55,620 stamps of the 7.5d were sent compared to 92,160 of the 5d, I would expect there to have been fewer printings, although it is entirely possible that there were as many printings consisting of fewer stamps each time. Like the 5d, there were a lot of unsold remainders that were eventually destroyed - 32,760 out of the original 55,620, leaving only 22,860 stamps that were sold and either preserved in mint form, or used.

I have 78 mint and used stamps of this value, which I sorted into the same five groups that I had identified in last week's post. This is the starting point for this week's post. I will now sort each of these five groups further by the shades of the head plate and duty plates (words of value) into printings. Once identified, this post will illustrate them and describe their characteristics. Once again, I do not have a sufficient number of dated used examples to be certain about the order of the printings, so when I refer to a printing as the "fourth printing", I mean the fourth printing that I identified - not necessarily the fourth printing made.

Like the first printings of the 5d, these first three printings show only minimal plate wear, with slight merging of the first three lines at the very top of the hair. Most all of the other details are clear. 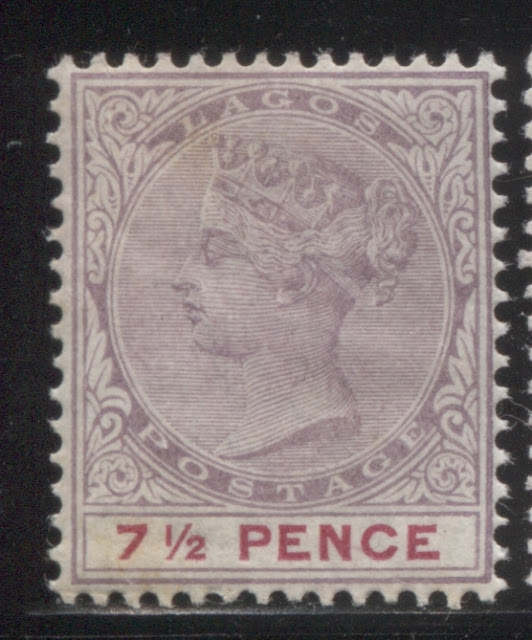 I am fairly confident that this printing is actually the true first printing because the date on two of the used examples that I have are March 24, 1894 and June 27, 1894, and this stamp was first issued in January 1894. The head plate is printed in  colour that is closest to reddish lilac on the Stanley Gibbons colour key, but lighter and slightly duller. The duty plate is printed in a deep aniline crimson that shows mildly through the back on mint examples and strongly through the back on used examples.
Here are all eight examples of this printing that are currently in my stock: 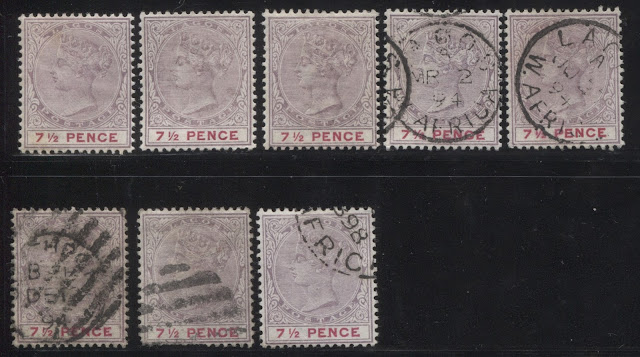 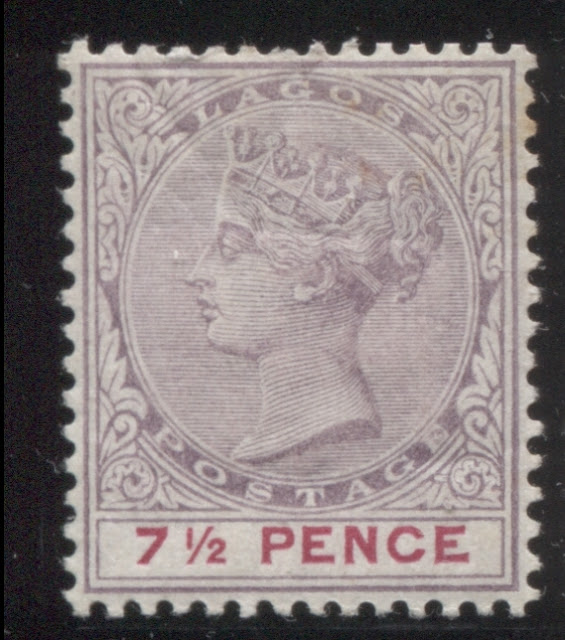 On this printing the lilac of the head plate is less reddish, being closest to slate lilac on the Gibbons colour key, but once again, it is lighter. The duty plate is also printed in a deep crimson, which is not aniline this time, as evidenced by the fact that it does not show through the back this time . However, from the few used copies where the crimson has run on exposure to water, it would appear that it was a doubly fugitive ink, rather than a singly fugitive one.
Here are all eight of the mint and used examples of this printing that are in my stock: 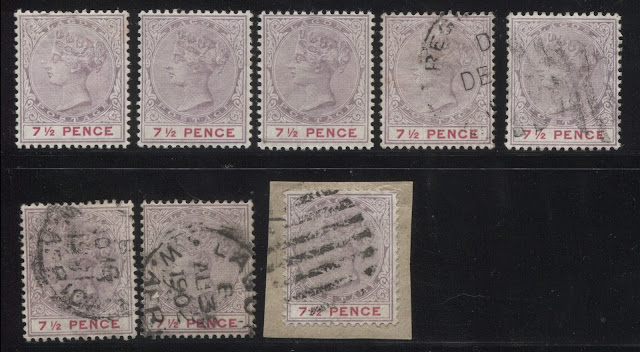 Note that there are some very late dates here like November 1901 and August 1902. That is to be expected given that this was not a very heavily used stamp. There were bound to be a small number of early printings on hand at several post offices until well after the late 1890's.
Third Printing

In this group of printings, like the 5d value, there is a slight loss of sharpness, with the most noticeable being the first shading lines near the jewels of the crown. 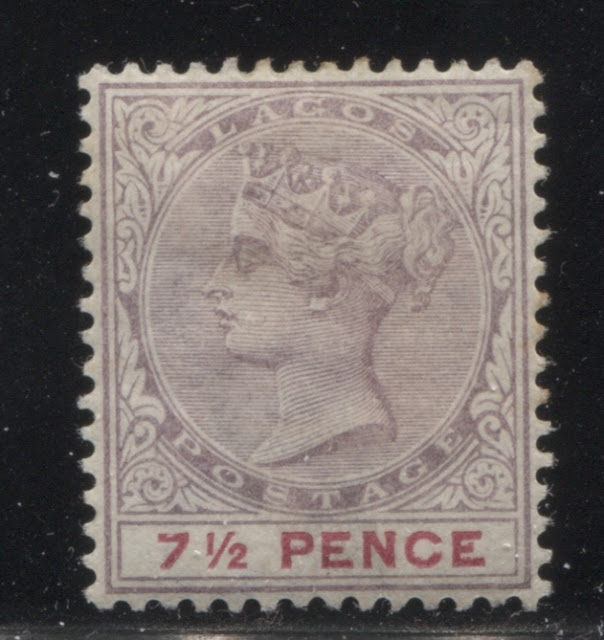 On this printing, the head plate colour is dull purple, as it was in the fourth printing. The only difference is the duty plate which is a deeper crimson ink, which is also aniline, as it shows clearly through the back.
Sixth Printing 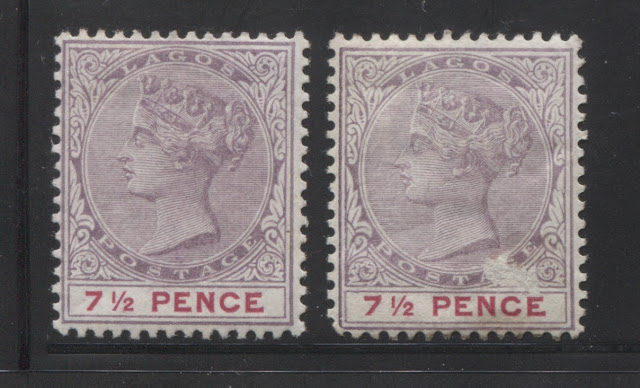 The head plate colour of this printing is closest to slate lilac, but is just a touch more rosy than the swatch in the Gibbons colour key. The duty plate colour is a deep aniline crimson, and does just show through on the back. 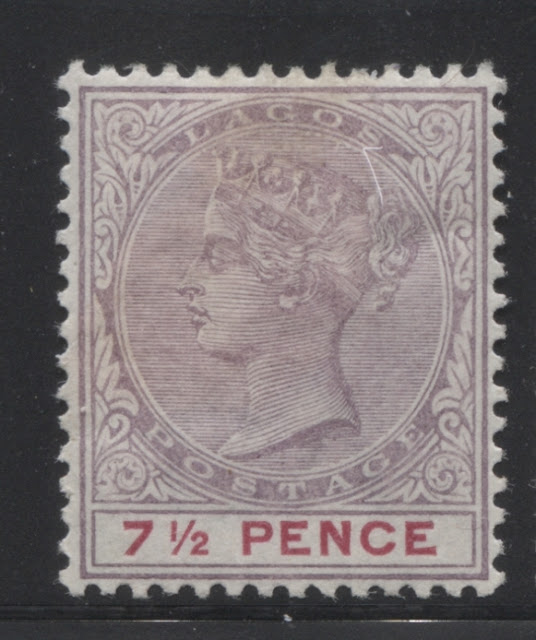 On this printing the head plate colour is closest to slate lilac on the Gibbons colour key. It lacks the rosy undertone that sixth printing had. The duty plate colour remains unchanged at deep crimson. It appears to be a non-aniline ink as evidenced by the fact that it does not show through the back.
I currently have ten mint and used examples from this printing: 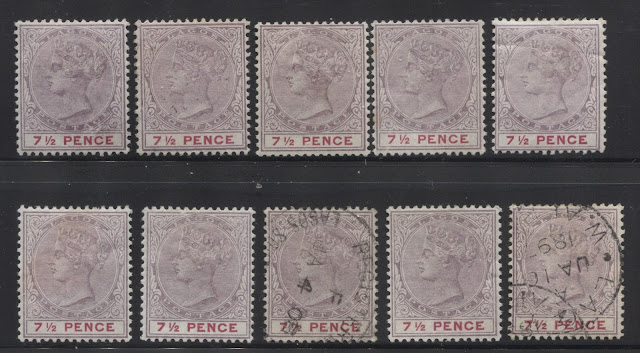 Like the 5d last week, the printings of the third group are characterized by the lack of detail in the hair in the back of the head, the merging of the top four or five hairlines at the top of the head, and the merging of most of the lower hairlines up to about half way up the jewels in the crown. 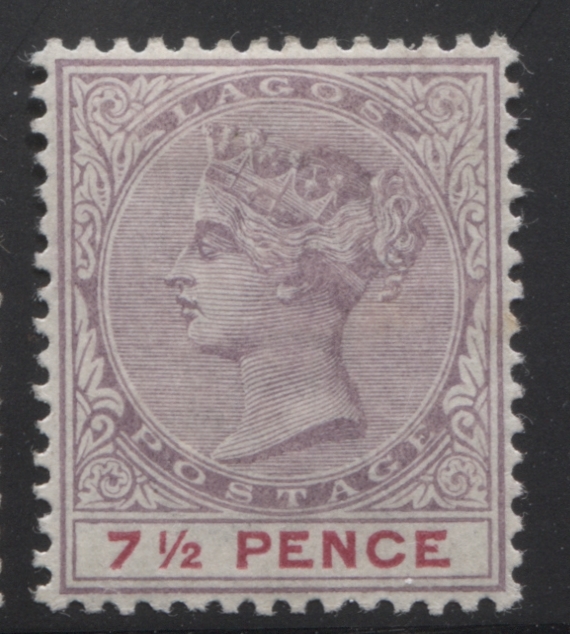 On this printing the head plate colour is closest to the dull purple swatch on the Gibbons colour key, but is noticeably paler. The duty plate colour is crimson, which is not aniline, as it does not show clearly through the back.

This is one of the more common ones in my stock, with 9 mint and 2 used examples. Here they are: 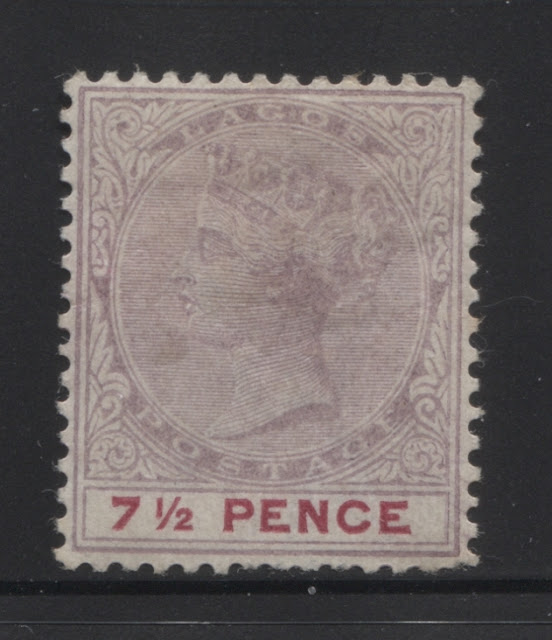 This printing is the palest of the 18 I have identified. If this stamp wasn't mint with full gum, I might be tempted to conclude that it is an extremely faded example. The head plate colour is closest to the dull mauve swatch on the Gibbons colour key, but is just a bit deeper and a touch more bluish. The duty plate colour is non-aniline crimson, as it does not show through the back of the stamp.
Tenth Printing 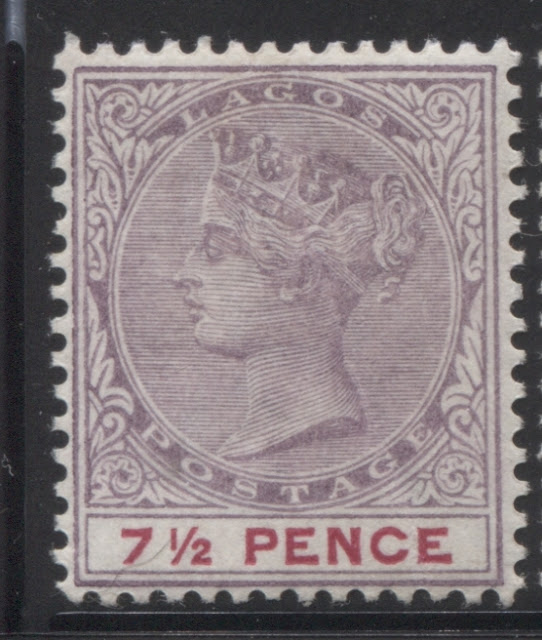 The head plate of this printing is almost an exact match for the dull purple swatch on the Gibbons colour key, while the duty plate colour is non-aniline crimson.
I have four examples of this printing, all of which are mint:

It is interesting and curious that all three of the specimen stamps that I have of this value are from such a late printing as this. The degree of plate wear apparent on these is too great for these to be from the first printings. Their existence supports the notion that specimens were produced and given out for purposes other than just UPU distribution, or they were given to new member nations that joined after 1894.
The head plate colour is about half way between the dull purple swatch and the deep dull purple swatch on the Gibbons colour key, while the duty plate colour is non-aniline crimson. These are the deepest shade of dull purple of any of the 18 printings that I have identified thus far. 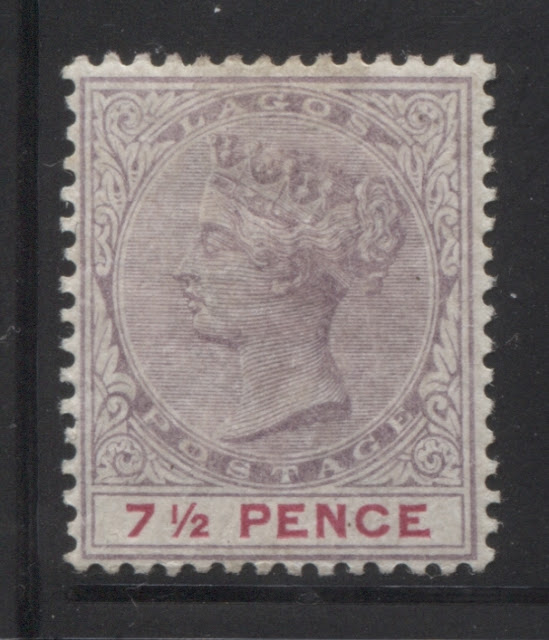 The head plate colour of this printing is closest to the grey lilac swatch on the Gibbons colour key, but it is just a bit rosier. The duty plate is printed in a non-aniline crimson.
Thirteenth Printing 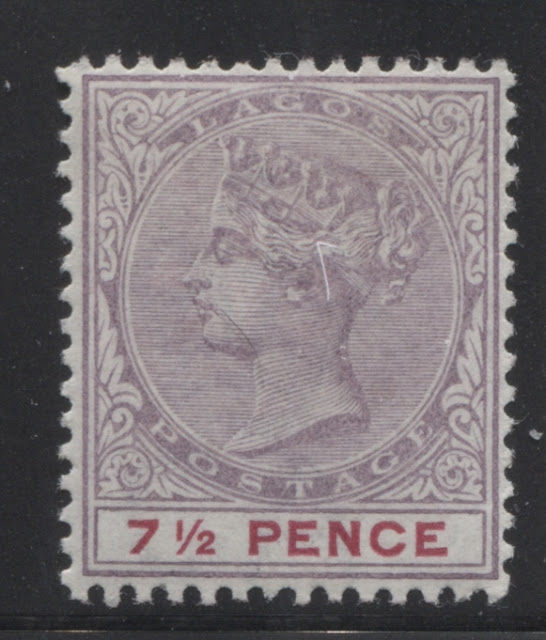 This printing looks very similar to 12, except that the head plate colour has less grey and more rose to it. It is very similar to what the slate lilac swatch would look like if it were made paler by adding a small amount of white to it. The duty plate colour continues to be a non-aniline crimson.
I have six mint examples and one used example of this printing: 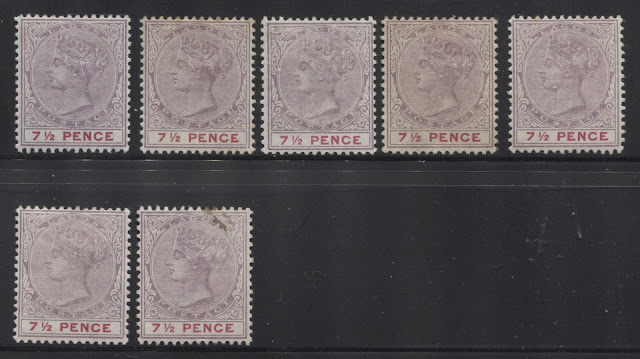 The cancel on the used example looks very strange, and there is better than even chance that is not actually genuine, given that used examples of this stamp are worth more than ten times as much as mint examples. 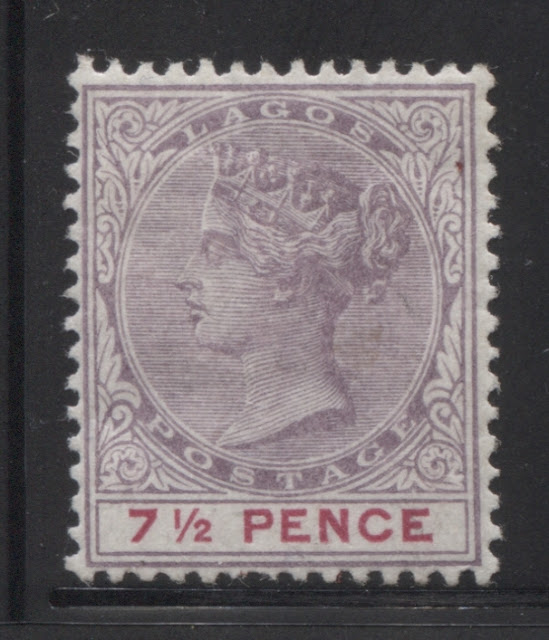 This printing does match the slate lilac swatch of the Gibbons' colour key almost perfectly. The duty plate colour once again is a non-aniline crimson that does not show through the back of the stamp. 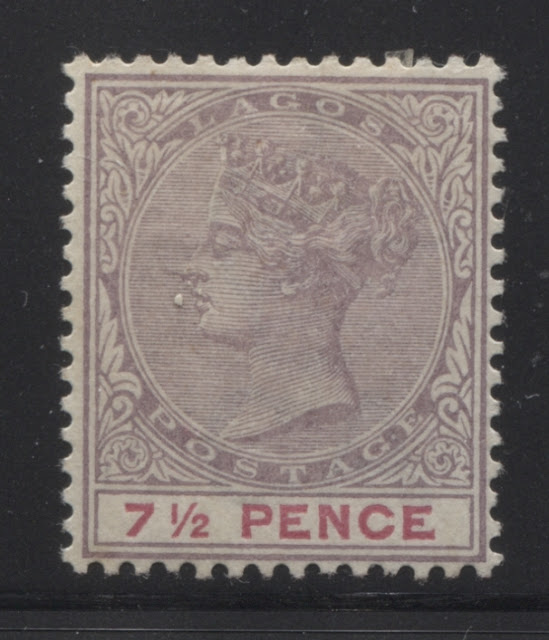 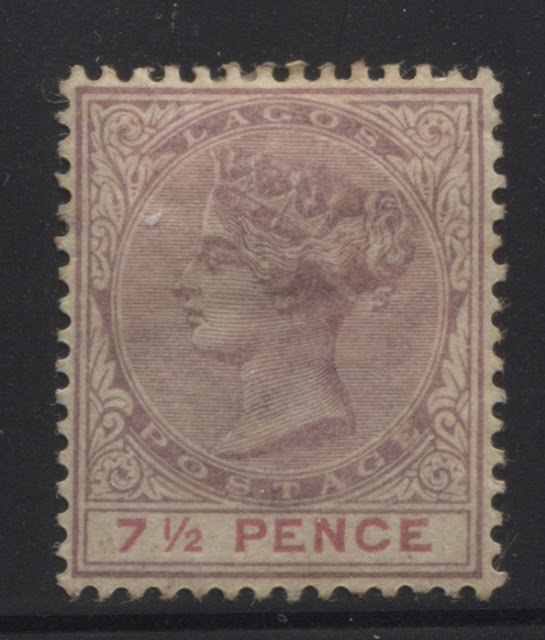 This unique printing is affected by tropical age toning, but nonetheless, it is very clear that both the head and duty plate colours are quite unlike any of the other printings. The duty plate colour is  clear match to the magenta swatch of the Gibbons colour key, while the head plate colour is a pale dull reddish purple. There is no swatch on the colour key for this, but you can clearly see that it is too reddish to match the dull purple swatch and too pale and dull to match the reddish purple swatch.

These last three printings all possess a coarseness of appearance that none of the preceding printings have. The detail in the hair at the top of the head is almost completely gone, and most of the shading lines in the lower horizontal band of the crown are completely merged together. 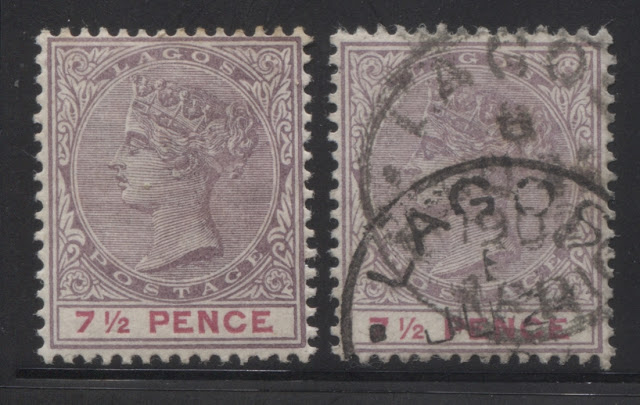 This is the last of the printings to have the duty plate printed in a deep magenta colour. The head plate is closest to slate lilac on the Gibbons colour key. The used example next to the mint one is postmarked June 24, 1902, which is perfectly consistent with its classification as a printing made between 1900 and August 1901, which is when these last printings were likely made. 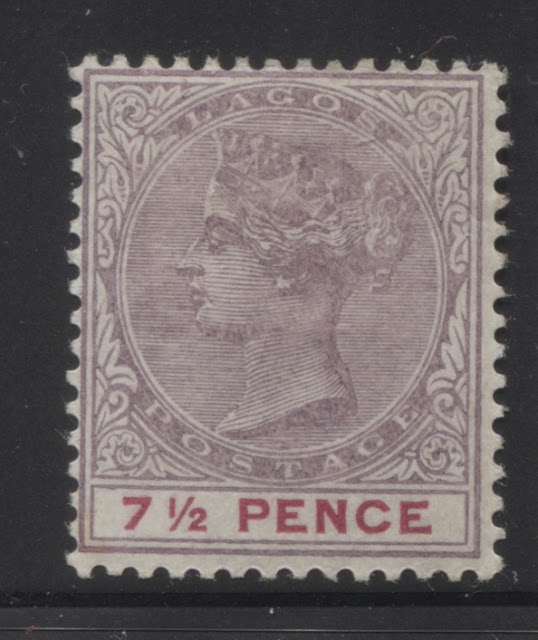 The duty plate colour on the last two printings reverts back to non-aniline deep crimson. On this printing, the head plate colour is a slightly duller version of the reddish lilac on the Gibbons colour key.

I have seven examples of this printing, of which three are used. All of these are shown in the scan below:

The dates on the cancellations are difficult to read, but they all dated between December 1902 and September 1903, so there is a good possibility that this is the last printing that was sent to the colony on August 19, 1901.

After careful examination of the stamps and careful study of the degree of plate wear, it appears that this stamp had almost as many printings as the 5d. In fact, it seems as though it had one more, with 19 printings made during the seven year period that it was printed. It is not a common stamp to find in used condition, which makes dating the printings difficult. For instance, almost none of the stamps in groups three and four of this value are used.  Despite this, it would seem, that the approximate date ranges that I gave for the five printing groups of the 5d would apply here also. They were:

The only difference I notice between this value and the 5d is the large number of late dates, with many of my 1894 printings being cancelled after 1898.

Next week I will look at the last of these three stamps: the 10d lilac and yellow orange. This should enable me to reach some pretty solid conclusions about what the main groups of printings were between 1894 and 1901 and their identifying characteristics. Armed with this information, I can begin looking at the 3d and 2.5d stamps that were issued in 1890-1891 with a view to identifying the pre-1894 printings, and then doing a good sort of the 1894-1901 printings.