The next series of posts will look at the 4d lilac and black stamp from the 1887-1903 Crown CA issue of Lagos. Although this is a bi-coloured stamp, there will be very little variation in the black colour, which was used for the duty plate, so that for all intents and purposes, sorting the printings of this stamp will have to rely almost exclusively on the variations in the head plate colour, as well as the degree of plate wear. However, the stamp was extensively surcharged in 1893 to meet the demand for halfpenny stamps, of which there was a temporary shortage. Existing stocks were used for this issue, so that the study of these surcharges will be useful for confirming the identity of printings made prior to 1893.

According to Ince, the first printings were dispatched on March 31, 1887 and the last ones on August 19, 1901. 258,540 stamps were printed, of which 107,880 were sent back as remainders and destroyed in 1903. This is a little more than half the number of 2d stamps that were issued, and like that value, almost half of the total issue quantity was remaindered. This suggests that:

To the best of my knowledge, there was no plate 2 used for this value, so we should see examples from all five states of the plate through to the last printings made in 1901. The lower number of stamps issued would suggest fewer printings, but this may not in fact be the case, as often the number of printings remained large, but each printing was just smaller in size. I'm guessing that there may still be as many as 40 printings, as 4d was still a fairly commonly used denomination.
Group 1 - Printings 1-8 From The First State of the Plate - March 1887 to March 1889
In this group, there is little to no merging of the hairlines above the crown, and the detail in the hair at the back of the head is almost to fully visible and crisp. The horizontal shading lines in the background are smooth and even in thickness, appearing evenly spaced. All the detail of the jewels in the diadem is visible.
In this group, I have a plate flaw, which is quite spectacular and similar to one that I have seen on the 4d violet of the earlier issue. It consists of a "donut" printing flaw at the bottom of the chignon of the Queen's hair.
First Printing 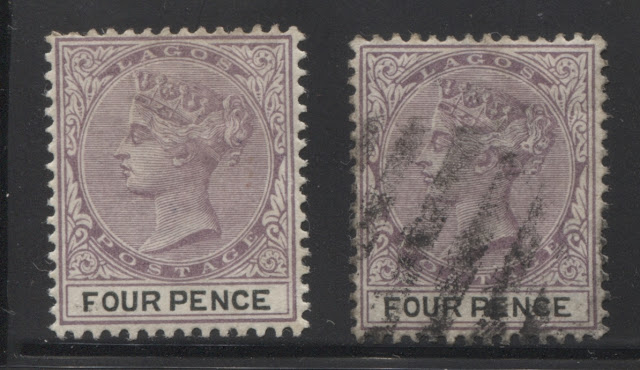 On this printing, the head plate colour is closest to Gibbons's deep dull purple, but is just a touch lighter. I have one mint example and one used example, as shown above. The used stamp shows a very interesting plate flaw in the Queen's hair, just at the back, near the bottom of the chignon. A close up scan is shown below: 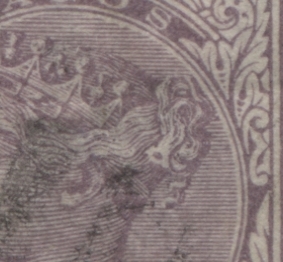 It is a donut flaw, resulting very likely from damage to the plate. It is the only example that I have come across in all the stamps of this, or any other Lagos series, which suggests that it was quickly repaired. I have seen a similar flaw, affecting the earlobe on the 4d violet, but this is not in the same position as this flaw. It is quite rare and spectacular for a De La Rue stamp, given that most De La Rue issues show very few flaws in general.

On this printing, the head plate colour is very close to Gibbons's deep rose lilac, but is just a little bit duller. I have one mint example, and four used examples, all of which are canceled with barred oval obliterators. All of these appear to be 8-bar, except for the stamp at the left, which is a 9-bar oval. 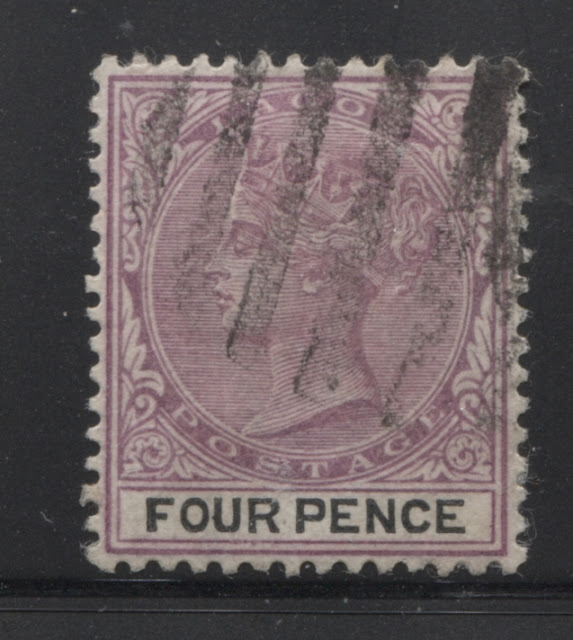 I only have the above used stamp, so it is entirely possible that this is not truly a separate printing, but a stamp in which the colour has run. The lilac is a singly fugitive ink, so it does run on contact with water. Nevertheless, I show this example here as a possible third printing. I will need to find a mint example to prove for certain that this is indeed a separate printing. The colour is closest to Gibbons's deep reddish purple, but a bit lighter.
Fourth Printing

The colour of this printing is an almost perfect match to Gibbons's deep dull purple. I have one mint example and two used examples. The used stamp on the left is cancelled with one of the earlier types of Lagos CDS, and is not common on this value, and the stamp on the right is cancelled with a strike of an 8-bar oval obliterator.

The colour of this printing is closest to Gibbons's dull mauve, but a little deeper. I have three mint, and three used examples. One of these is postmarked with what appears to be a foreign cancellation of unknown origin, though the "ermann" in the name suggests a German steamship cancel, which is quite desirable for this. The other two are cancelled with what appear to be 9-bar oval obliterator cancellations. 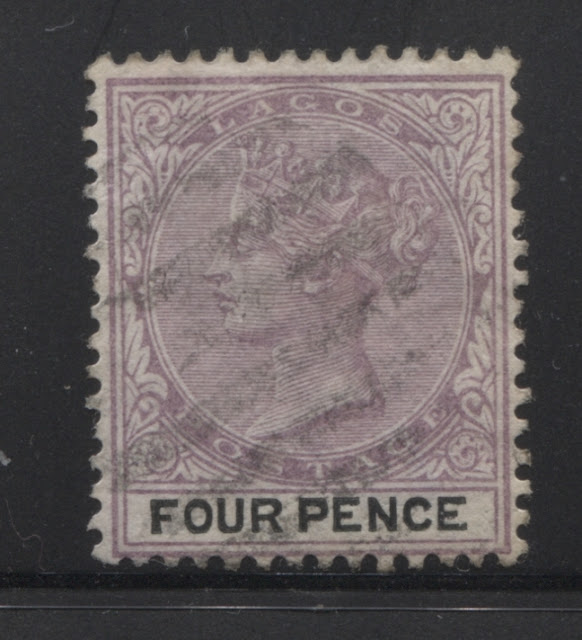 The colour of this printing is tricky as it does not closely match any of the Gibbons swatches. It is too purple to match either the deep reddish purple or reddish purple swatches and too light to match the plum swatch. However, I would say that it is closest to plum in its tone, so I would call it the pale plum shade.
I have only the above used example, which is printed on a paper showing the watermark very clearly and with a highly visible, vertical mesh - another factor which supports the notion that it is a separate printing. It appears to be cancelled with a strike of an 8-bar oval obliterator.
Seventh Printing 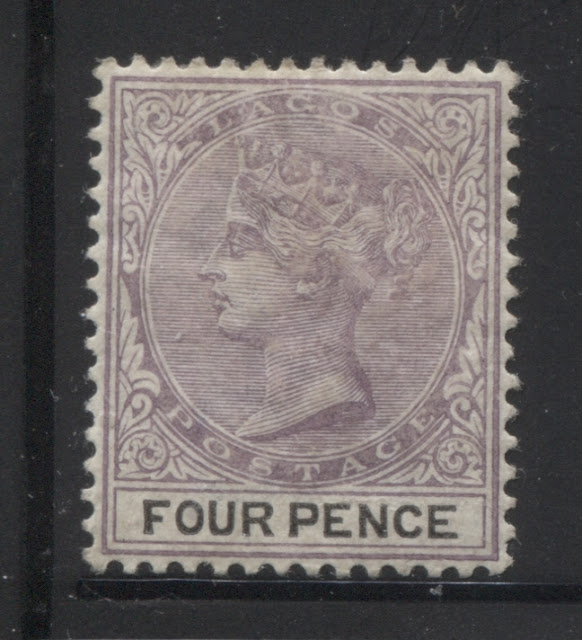 The colour of this printing is a perfect match to Gibbons's dull purple. I have only the mint example shown above. 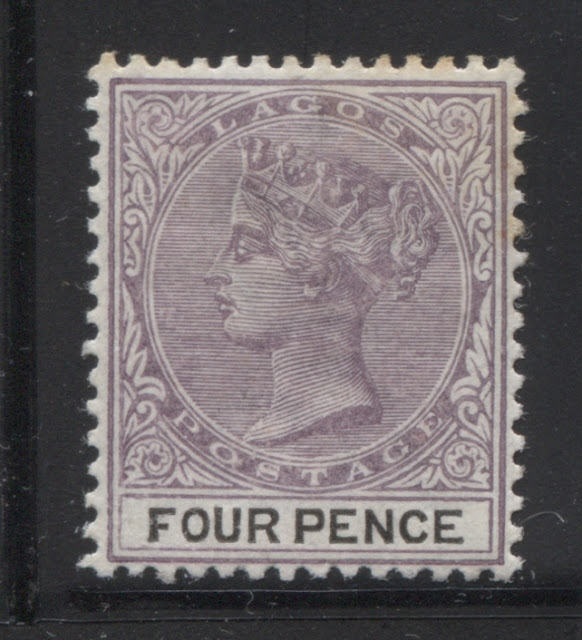 The colour of this printing is very, very close to that of the second printing, but the colour is just a bit closer to deep dull purple than it is to deep rose lilac. However, it is not dull enough to be either the dull purple, or the deep dull purple.
Again, I have only the above mint example.
Group II - Printings 9-16 From The Second State of the Plate - June/July 1889 to March 1891
In this group, the detail of the design is similar, but there is a slight loss of sharpness and some very minor merging of a few hairlines in places, and very slight muffling of the detail in the hair at the back of the head. However most all of this detail is still visible.
Ninth Printing

The colour of this printing is very close to Gibbons's reddish lilac, but is just a bit deeper. All of my examples are used. Most of these appear to be cancelled with 9-bar ovals, but the stamp on the right and second stamp from the left are 8-bar cancels. The second stamp on the right is cancelled with an April 13, 1897 23.5 mm Lagos CDS, which indicates a late usage - something that does occur fairly regularly with these stamps.
Tenth Printing

On this printing, the colour is closest to Gibbons dull purple, but it contains a little more lilac and is quite a bit lighter and milkier. It is too dull to be a match for the reddish lilac swatch however.
I have two mint examples, and three used as shown above. One is cancelled with an unreadable Lagos CDS, one with a Hamburg ship cancel from what appears to be 1901, which would be another late use. Finally, the stamp at the right is cancelled with a 9-bar bar oval cancel.
Eleventh Printing

The colour is the same as the eighth printing above, that is a cross between deep rose lilac and deep dull purple. It is quite possible that this is the same printing, as it has become apparent that not all subjects on the plate wore evenly. However, I have included it here as a separate printing due to the fact that these stamps are not as crisp and there are five of them. Four of these are mint and one is used, with an 8-bar oval cancel.

The colour of this printing is very close to deep, dull purple and the fourth printing, except that there is a very slight bluish undertone.

I have two mint stamps, and two used. The used stamp on the left is cancelled with what appears to be a 1903 Lagos cancel, making it another late use. The stamp on the right is cancelled with a London ship-letter CDS dated August 11, 1890. This is the only example of a London ship letter cancel I have come across on any Lagos stamp, or indeed any Nigerian stamp. So I know it is very scarce. Any dated CDS prior to 1892 is very scarce on this issue. 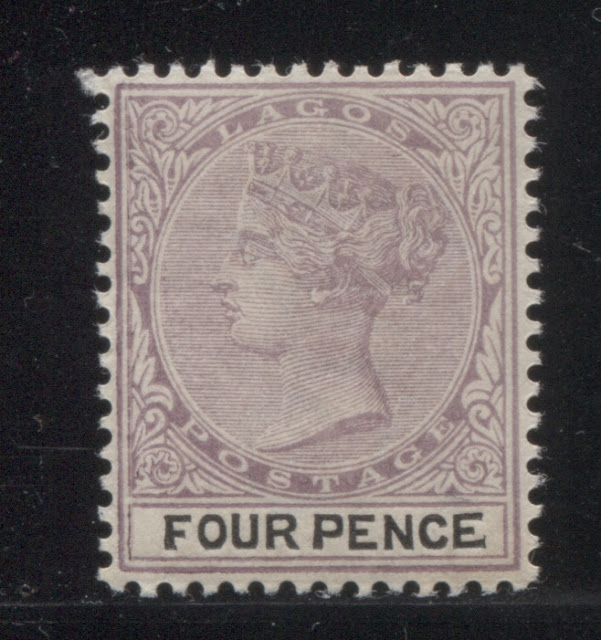 The colour of this printing is closest to Gibbons's reddish lilac, but is just a bit duller. I only have a single mint example, with streaky gum as shown above.
Fourteenth Printing 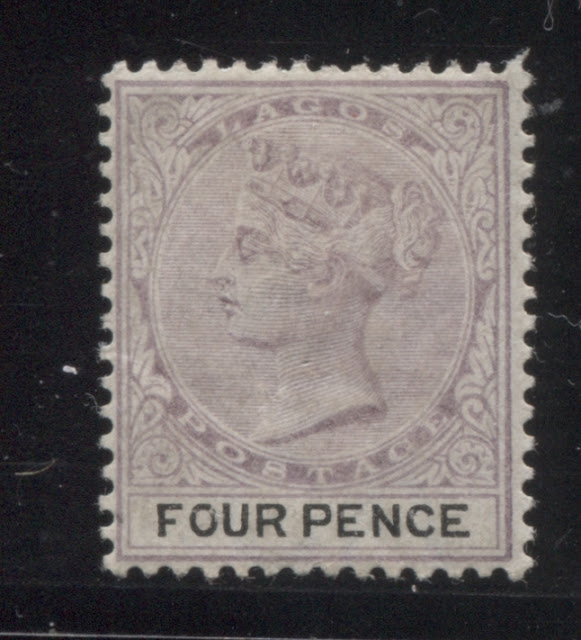 The colour of this printing is very distinct. It is a pale version of the dull purple, that contains a bit more grey than the other dull purple shades. It becomes more prevalent in the later printings, as we shall see, but this is an earlier version of it.
I have only the single mint example shown above.
Fifteenth Printing 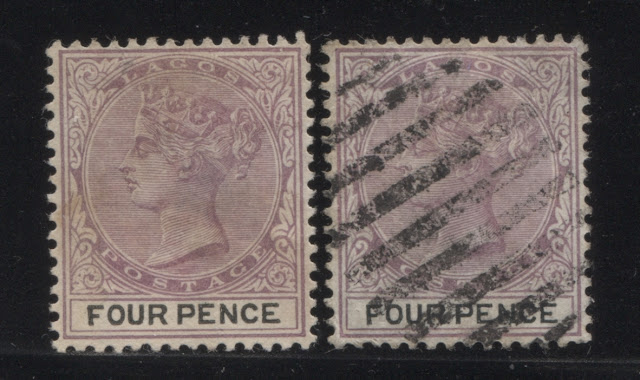 This is another printing, that may in fact, not be a true printing, but merely the effect of moisture on the ink, as the mint example shown here has no gum. The colour is closest to what the maroon swatch would be if it were very pale. It is too brownish to be a match for the reddish purple, so pale maroon is the closest match in terms of tone.  The used example shown here is cancelled with a 9-bar oval obliterator.  A mint example with gum will be needed before I am convinced that this is truly a separate printing.
Sixteenth Printing 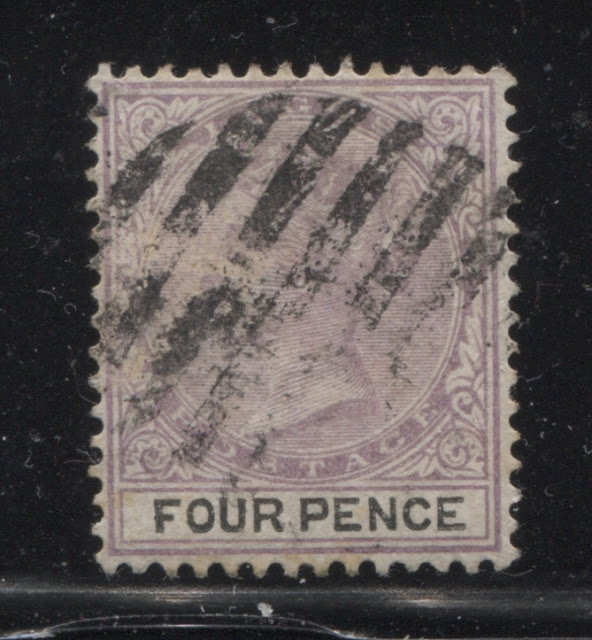 Again, this is another stamp that may not truly be a separate printing, as the ink possesses some of the characteristics of having been affected by soaking, and a mint example will be required to confirm that it is not simply a changeling. Like the fifteenth printing, it is closest to pale maroon in terms of tone, but on this stamp the colour is quite a bit paler than the fifteenth printing. This used example is cancelled with what appears to be an 8-bar oval obliterator.
This concludes my review of the printings from the first two states of the plate. Next week I will look at the printings made from the third state, which are characterized by a loss of detail in the hair at the back of the head, and merging of the top 3-5 lines of the Queen's hair at the top of the head.
Back to blog