Today, I carry on with the 2.5d ultramarine with the seventeenth printing, which should have been made sometime around July or August of 1894.

The head plate of this printing is an almost exact match to Gibbons's bright blue, while the duty plate colour is royal blue.

I have two mint type A's and two type B's, one of which is used, and has been cancelled with what appears to be an 8-bar oval obliterator. 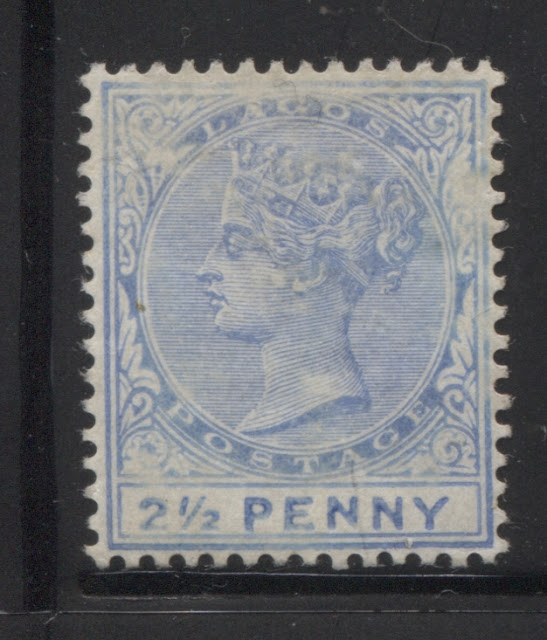 On this printing the head plate and the duty plate are closest to what Gibbons's cobalt blue would be if it were deeper. A similar shade is found on the very late printings made after 1899, but the degree of plate wear showing on this example is too advanced for it to have been from the new plates that appear to have been used to print the last printings. I have only the one mint example shown in the scan above.
Nineteenth Printing

The head plate of this printing is closest to a very pale version of the dull ultramarine, while the duty plate colour is ultramarine. I have five mint and two used examples, all of which are type A. The used example on the right with the Badagry CDS is badly discoloured, but I think underneath all the discolouration, that it matches the other stamps shown here.
Group 3 - Printings 20 to 37
In this group of printings we finally see most of the detail in the hair at the back of the Queen's head gone. Some stamps will show a little detail, but most will show very little. In addition, the top 5 hairlines and the bottom 3 or 4 above the crown are merged on most stamps, leaving only a small band of hair in the middle
Twentieth Printing 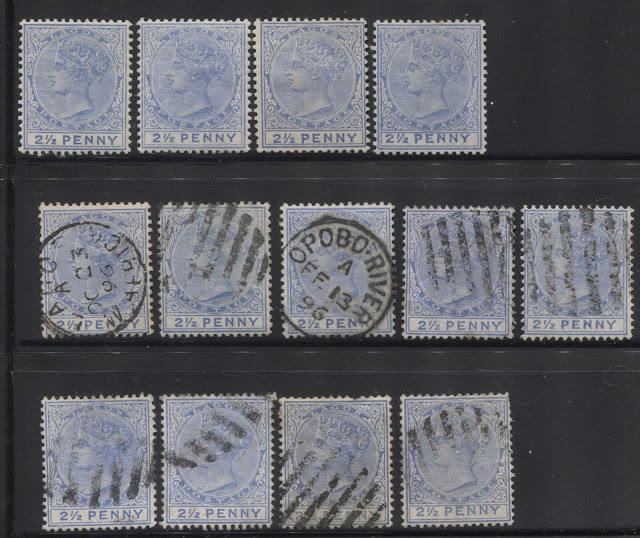 On this printing, both the head plate and duty plate colour are closest to ultramarine on the Gibbons colour key, but are just a little bit lighter. I have four mint and nine used examples. Most of the used examples are canceled with a mixture of 8-bar and 9-bar oval obliterators. The first used stamp is one of the earliest examples of a CDS cancel that I have seen on this stamp, which is usually always cancelled with a barred oval prior to 1899. This one is dated October 23, 1896. The cancellation on the third stamp is very interesting: Opobo River is in the Niger Coast Protectorate, and this cancellation is dated almost 10 years before Niger Coast Protectorate and Lagos amalgamated in 1906. So it would appear to be a very rare example of a Lagos stamp used in Niger Coast Protectorate.
In this group there is also another example of a plate flaw, which may be constant: a diagonal break in the inner frame below the "2" of "1/2". It is present on the lower left stamp in the scan. Here is a close-up scan of that flaw: 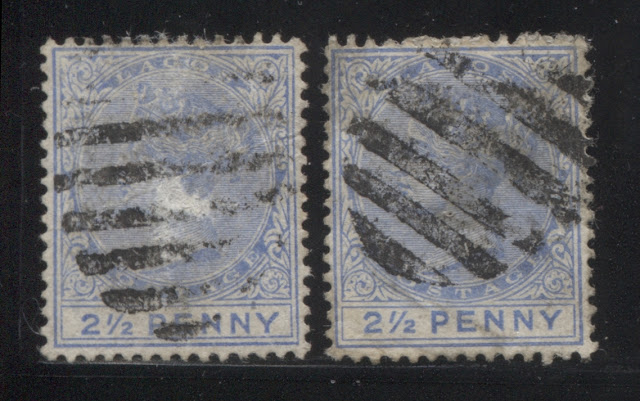 In this printing, both the head plate and duty plate are closest to what Gibbon's cobalt blue would be if it were deeper. I have only two used examples, both of which appear to have been cancelled with an 8-bar oval obliterator, The first example is badly scuffed, but this would seem to be one of the scarcer shades in which this stamp was printed. Both examples are type A.
Unfortunately this was all I had time to document today. If I get time later in the week, I will add a few more printings, but it would seem that it will be at least another week before I can finish detailing the remaining printings of this value.