Today's post concludes my examination of the three stamps issued in 1894 by Lagos to facilitate payment of insurance charges on registered parcels: the 5d, 7.5d and 10d. Several weeks ago we looked at the 5d lilac and dark green and concluded that there were approximately 18 printings and then the 7.5d lilac and crimson and concluded that there were 19 printings of those stamps. Given that only 43,380 stamps of the 10d were sent, compared to 55,620 stamps of the 7.5d, and 92,160 of the 5d, I would expect there to have been fewer printings, although it is entirely possible that there were as many printings consisting of fewer stamps each time, just was was the case with the 7.5d. Like the 5d, and 7.5d there were a lot of unsold remainders that were eventually destroyed - 23,100 out of the original 43,380, leaving only 20,280 stamps that were sold and either preserved in mint form, or used.

I have 84 mint and used stamps of this value, which I initially sorted into the same five groups that I had identified in the posts dealing with the 5d and 7.5d, plus a sixth group: those that had all the characteristics of being from plate 2.  I then sorted each of the first five groups further by the shades of the head plate and duty plates (words of value) into printings. I will now illustrate them and describe their characteristics. Once again, I do not have a sufficient number of dated used examples to be certain about the order of the printings, so when I refer to a printing as the "fourth printing", I mean the fourth printing that I identified - not necessarily the fourth printing made. In all, I believe I have identified 17 printings of this value.

Like the first printings of the 5d and 7.5d,  these first three printings show only minimal plate wear, with slight merging of the first three lines at the very top of the hair. Most all of the other details are clear, but are not as crisp as the stamps printed from plate 2.

I am fairly confident that this printing is actually the true first printing based on the fact that my two used examples are dated March 2, 1894, and April 16, 1894, just three to four month after the stamps were sent to the colony. The head plate is closest to reddish lilac on the Gibbons colour key, and the duty plate colour is orange-yellow on the colour key. The orange yellow is very bright and deep.

I have thirteen mint examples in my stock, four of which are shown below: 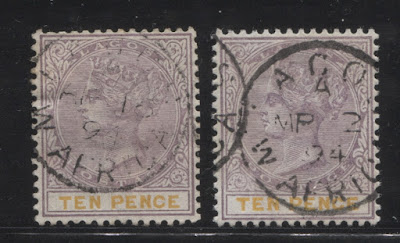 I have one mint single, and four used examples of this printing as shown below: 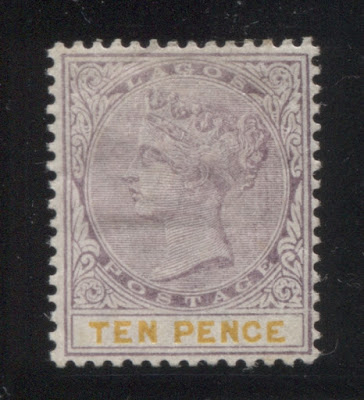 These cancellations are difficult to read, but it looks very much as if they are all dated in 1901, which is way later than the time that the fourth printing would have appeared. This suggests that a number of these stamps, like other stamps of this issue were used much later than they were received, having sat in the bottom of a postal clerk's drawer.

In this group of printings, like the 5d and 7.5d values, there is a slight loss of sharpness, with the most noticeable being the first shading lines near the jewels of the crown.

In this printing the head plate colour is a pale milky reddish lilac. It is pale like the third printing, but it lacks the slate undertone and is more reddish. The duty plate colour is the same bright orange-yellow as the first printing.

I have identified four mint and four used examples in my stock:

The stamp on the left is dated sometime in 1896, which makes sense for a fourth printing. The other two dated examples are very difficult to read, but the second stamp from the left appears to be dated 1903, which indicates another late usage. The third stamp does not have a readable date, but I can see that the date consists of only 2 numerals, which suggests that it is pre-1900, as dates after 1900 usually have the full four numerals of the year. The fourth example is cancelled with an 8-bar oval obilterator, which had been more or less phased out by 1898, so it is consistent with this being a fourth printing.

This printing is very similar to the fourth, but the colours of both the head and duty plate are very slightly different. The head plate is much paler and duller, containing a hint of rose, but also a hint of grey, except that is is not close to any of the grey-lilac or slate-lilac swatches on the Gibbons colour key. The duty plate colour is deeper than the normal orange-yellow, containing more orange. However, it does not contain quite enough orange to be yellow-orange.  I have only one solitary mint example, and it is shown below. 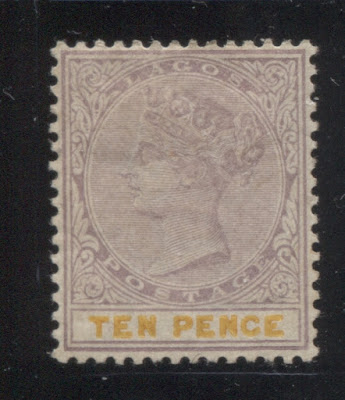 Sixth Printing
On this printing, the head plate colour is closest to the reddish lilac swatch, but is much deeper. The duty plate colour is about half way between lemon on the Gibbons colour key and the orange-yellow swatch. On the one hand, it seems close to the orange-yellow swatch, but is nowhere near as deep. Then it is also close to lemon, but is definitely deeper than the lemon swatch.
I have four mint examples in my stock, and two used examples as shown below: 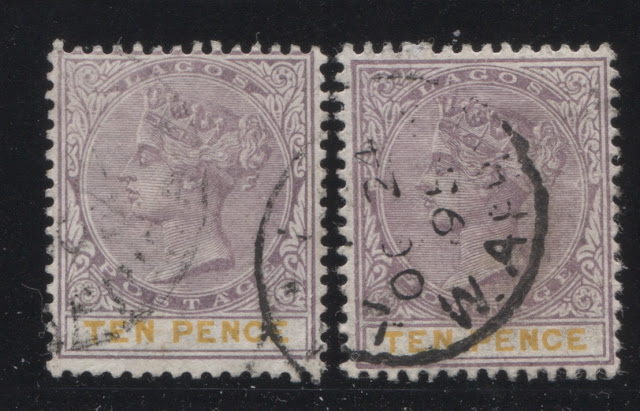 I cannot read a date on the used stamp on the left, but the stamp on the right is dated October 24, 1895, almost 22 months after the stamp was first sent to the colony. So it would seem this printing is probably the earliest one in this second group of four printings.
Seventh Printing

The head plate colour of this printing is also a deep reddish lilac. But the duty plate colour is much closer to orange than it is to yellow. It is still closest to the orange-yellow swatch on the Gibbons colour key, not containing quite enough orange to be a match for the yellow-orange swatch. 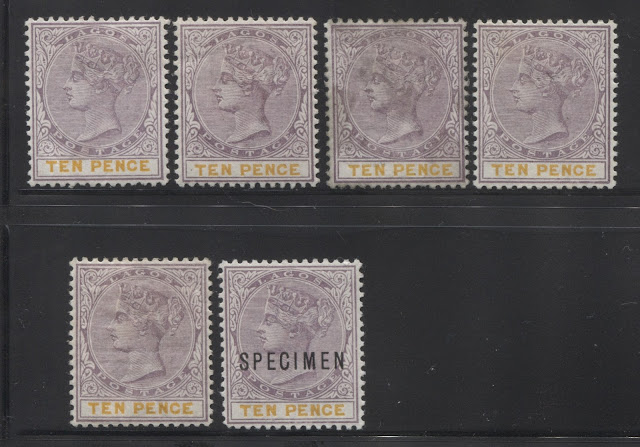 I have three used examples of this printing, all of which appear to have been cancelled with 8-bar oval obliterators:

Like the 5d and 7.5d, the printings of the third group are characterized by the lack of detail in the hair in the back of the head, the merging of the top four or five hairlines at the top of the head, and the merging of most of the lower hairlines up to about half way up the jewels in the crown.

I have four mint, and three used examples of this printing, which are shown below:

Unfortunately the dates on all but the middle stamp, which is dated August 21, 1899. This middle cancellation looks suspect though. I've examined it under a loupe, and it looks to me as though it may be genuine, but someone has gone over it with a felt tipped black pen to strengthen it.
Ninth Printing

The head plate colour is still a deep reddish lilac on this printing, but the duty plate colour now moves firmly away from orange-yellow, to deep lemon, being closest to the lemon swatch on the Gibbons colour key.

I only have four mint examples of this printing, all of which are shown below:

The head plate of this printing is printed in a colour that is closest to the dull purple swatch of the Gibbons colour key, while the duty plate colour is almost a perfect match for the orange-yellow swatch. I have one single mint example shown below: 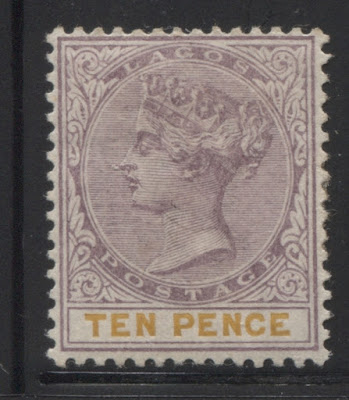 Eleventh Printing
The head plate colour of this printing is closest to deep reddish lilac, although it is also similar to the dull purple swatch of the Gibbons colour key. In the end it is the rosy undertone of the colour that precludes it from being classified as dull purple. The duty plate colour again is closest to orange-yellow, but it is much brighter and closer to yellow than the pure orange-yellow. However, it is too deep to be a match for the lemon swatch.
I have four mint examples, including one with a specimen overprint, as shown below:

I also have one used example, with a lovely April 13, 1897 Lagos CDS cancel as shown below: 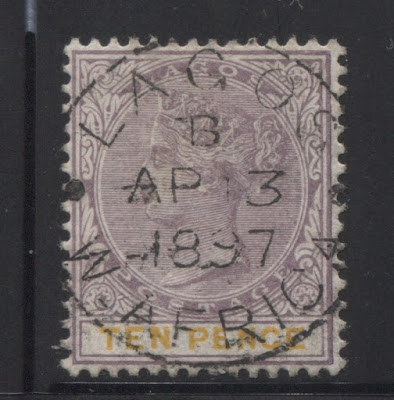 The head plate colour of the stamps from this printing is pale milky reddish lilac, while the duty plate colour is deep lemon.

I have four mint examples from this printing, as shown below:

I have one mint example, and one used example of this printing, as shown below: 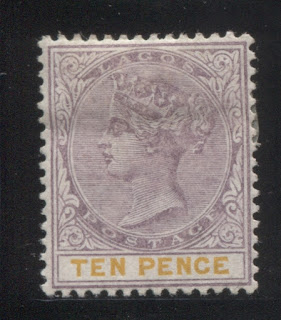 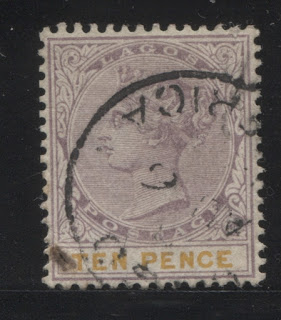 This printing is distinct in that there is a coarseness of appearance that none of the preceding printings have. The detail in the hair at the top of the head is almost completely gone, and most of the shading lines in the lower horizontal band of the crown are completely merged together.

The head colour for this printing is deep reddish lilac, but the duty plate colour has reverted to orange-yellow.

I have two mint examples of this printing: 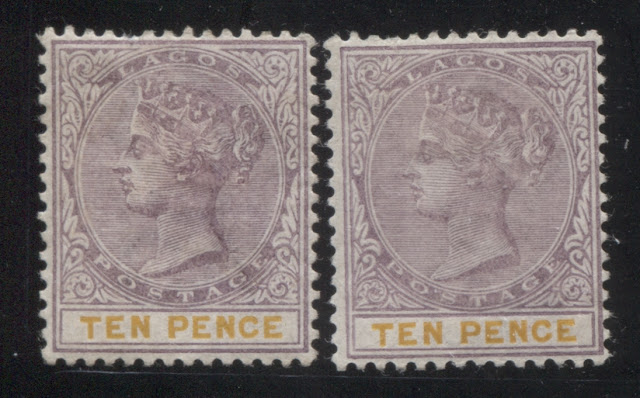 This group was not present in the 5d or 7.5d stamps that I examined, but it is the most distinct of all. All the details in the hair, crown and so forth are both clear, and completely crisp, in a way that the first printings are not. This clearly suggests that these stamps were printed from the new plate 2.

On these last two printings, the head plate colour completely changes away from lilac and towards deep purple. It is a problematic colour in the sense that it does not closely match any of the swatches on the Gibbons colour key. It is closest in to the deep purple swatch, but is definitely a duller colour, while it is not nearly as deep, nor as dull as Gibbons' deep dull purple. The duty plate colour is orange-yellow. I have one mint and one used example from this printing. 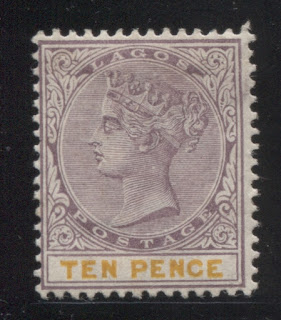 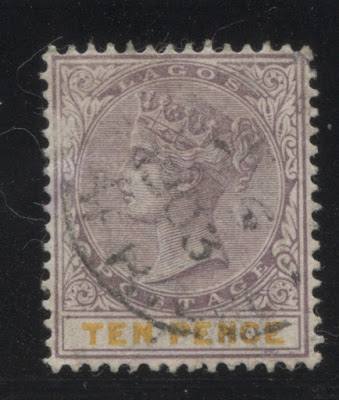 Seventeenth Printing
Like the sixteenth printing, the head plate colour of this printing is closest to deep dull purple. The only difference really is the duty plate colour, which is a deep lemon yellow instead of orange-yellow.
I have one mint and four used examples of this printing, as shown below. 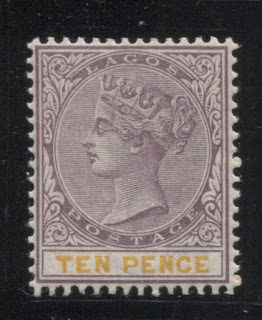 Interestingly, all the used examples of these last two printings that I have seen are dated in 1903. The very last printing would have been sent to the colony on August 19,1901, but there very likely was another printing made between 1900 and that date, when plate 2 replaced plate 1.
So this takes us to the end of these three stamps. My ability to accurately speculate on when the printings were made is very limited, but the following date ranges would seem to make sense:
Printings 1-3: 1894-1895.
Printings 4-7: 1895-1897.
Printings 8-11: 1897-1898.
Printings 12-14: 1898-1899.
Printing 15: 1900
Printings 16-17: 1900-August 1901.
So we should have a good enough sense now from looking at these three stamps, what the characteristics are of the printings made from 1894 to 1901, such that when we go back now and look at the other values in this set, we can isolate the printings made during this period, so that we can begin to identify which printings were made between 1887 and 1893. The next logical step is to turn our attention to the other two stamps that were not issued in 1887: the 3d, which was not issued until 1890 and the 2.5d, which was not issued until April 1891. The hope here is that we can now identify, with these two stamps, what the characteristics are of printings made between 1890 and 1891. Then we can use that information to find the 1890-91 printings of all the other values in the series. Then, after that is completed, we are left with the task of isolating the post 1893 printings of most of the values in this series, and then sorting and identifying those printings made between 1887 and 1890.
Next week's post, will look at the 3d lilac and orange brown.