Today's post continues the long and arduous journey into the printings of the halfpenny green and 1d carmine stamps that I started last week. While last week's post dealt with the halfpenny green, today's post will look at the 1d carmine. As stated at the beginning of last week's post, there were a whopping 49 printings of this stamp made between 1884 and 1902. Eleven of these were made between July 1884 and December 1886. It is my goal with today's post to identify as many of those eleven printings as I can.


The stamps issued before 1887 should be identifiable from a number of characteristics, that we have now become familiar with on other stamps issued at this time:
Today's post will attempt to identify and describe the eleven printings of the 1d carmine that fall into this brief period from 1884-1887. The eleven printings totaled 41,760 stamps. This was roughly 2% of the total printing of 1d stamps. So needless to say, these stamps are relatively scarce. However, I have been fortunate to have a very large number of mint an used stamps at my disposal to study. Over a year ago, I sorted them into what I felt were all the different printings. I identified 89 different groupings - way more than there were printings. So while I most likely do have all 49 printings, it is clear that at least 40 of my groupings would have to be combined with one another in coming up with 49 final groups.
Today's post will examine those stamps that I believe may have come from the first eleven printings, which were made as follows:
As you can see all the printings except for the last two are more or less the same in terms of scarcity.
The first characteristics I am looking for among the stamps that I have sorted are:
The rest of the post describes the stamps that I have found that seem to possess the above characteristics. 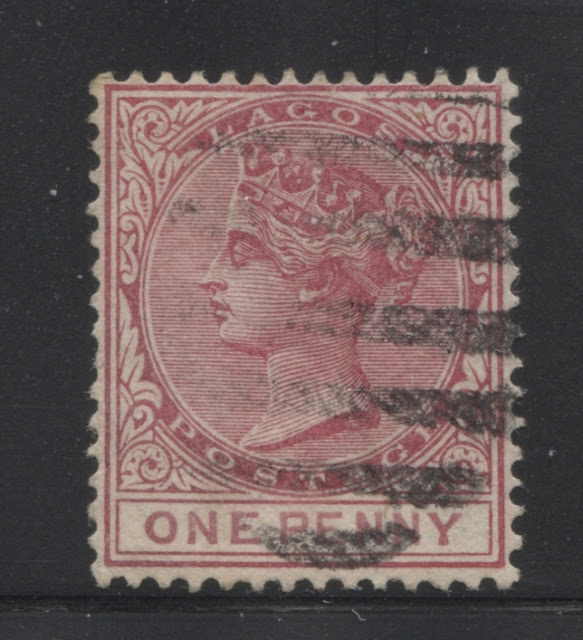 What stands out about this stamp is the colour, which is different for both the head plate, and the duty plate. The head plate colour is very close to pure carmine on Gibbons' colour key, while the duty plate colour is slightly paler, perhaps being rose-carmine. The hair and diadem shows the very first signs of plate wear, which I believe probably places this sometime in 1886. This would be consistent with some of the early printings of the next period (1887-1900) that I have seen in this deep colour. It is also cancelled with an 8-bar oval killer, which is consistent with it's classification in this period. 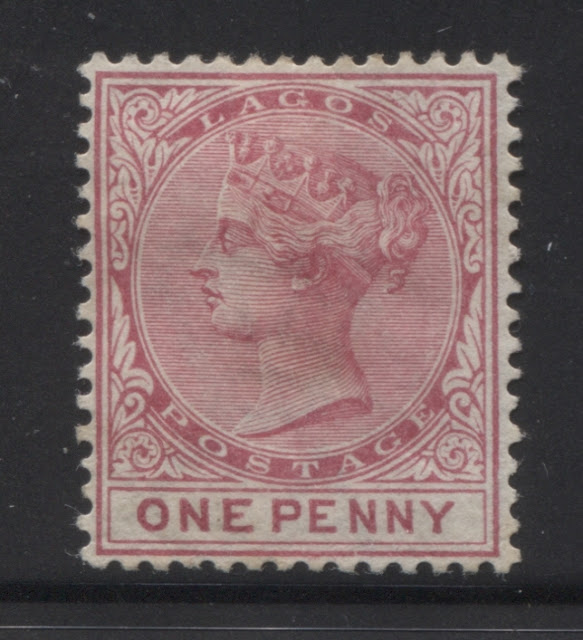 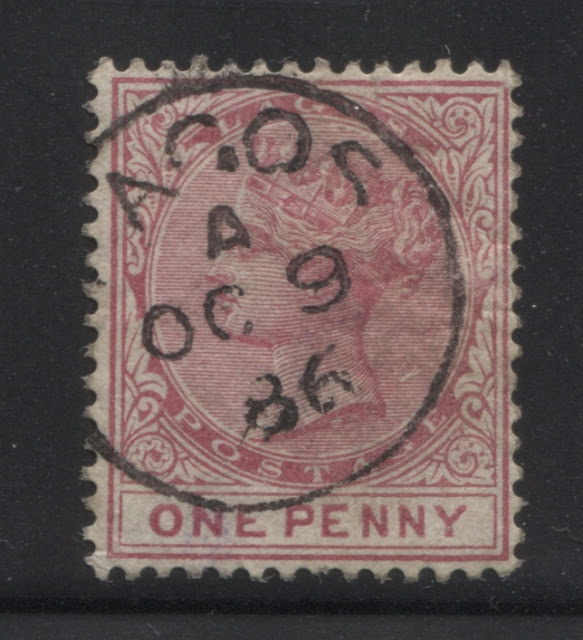 Here is a used example, with an October 9, 1886 CDS cancel, so it could be from any one of the first 9 printings. However, it is most likely to be from either the eighth or ninth printing.
Stamp 4 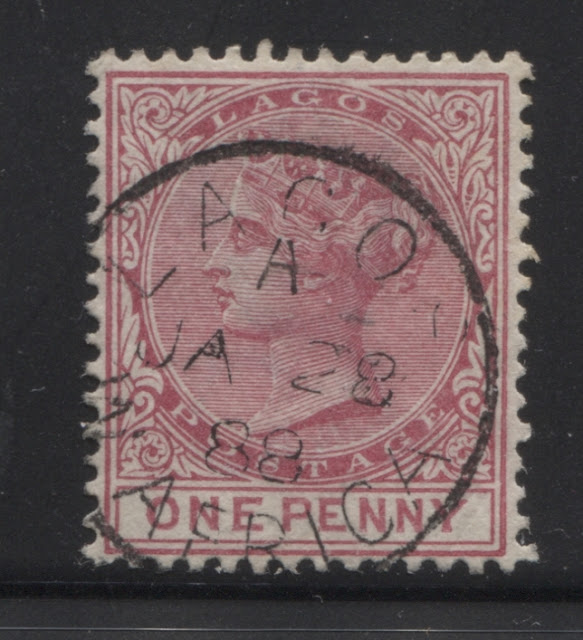 This stamp, postmarked on January 28, 1888 is printed in bright carmine, with just a touch of rose, for both the head plate and the duty plate. The hair and diadem shows the first signs of plate wear, which suggests, together with the cancellation date, that this is from the eleventh printing, sent out on December 13, 1886, or possibly the tenth printing, sent on October 12, 1886. 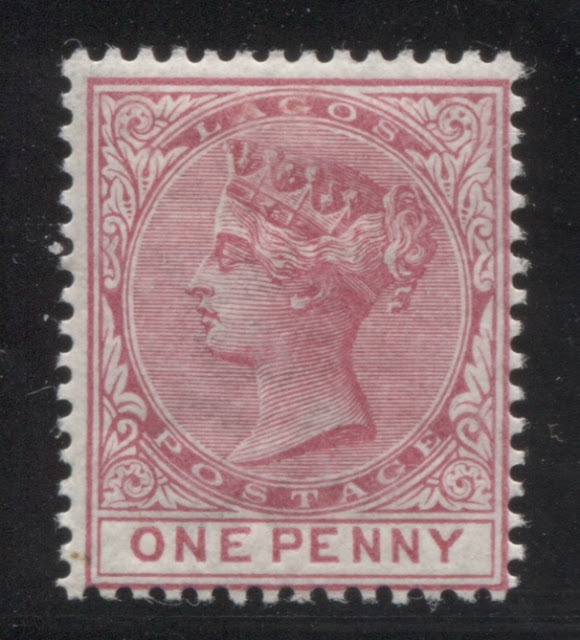 This stamp has distinctly crackly gum, which based on the other values I have examined is from one of the four printings made before July 13, 1885. The head plate is printed in rose-carmine,while the duty plate is printed in bright carmine. The hair and diadem do show a bit of plate wear at the back of the head, which tends to suggest a later printing out of these four. So my best guess is that this is from the fourth printing sent out on April 21, 1885.

These three used examples are printed in the same shades. The middle stamp shows more plate wear than the mint stamp above, and may actually be from the 1887-1900 period. The two end stamps are cancelled in that middle period, but both have the clarity of detail associated with the earlier printings. As I have written many times before, it is entirely possible for a few stamps from the April 1885 printing to be cancelled as late as 1890 or 1892. Stamps received by the post offices are usully sold on a last-in-first out basis, as new sheets received are simply placed on top of the old ones and the stamps are sold from the top sheet on the pile. Thus it is possible for a postal clerk to have a sheet or two from an earlier printing that sits at the bottom of the drawer and doesn't get sold completely before the next shipment arrives. Of course some clerks might put the old sheets on top if they had already started to sell from them, but I'm guessing that if a sheet was intact, that they likely wouldn't place it on top of the pile.  I'm not sure how many post offices there were in Lagos at this time, but I'm guessing with a printing of 60 sheets or so, that each post office probably received 2 or 3 sheets,
each quarter. 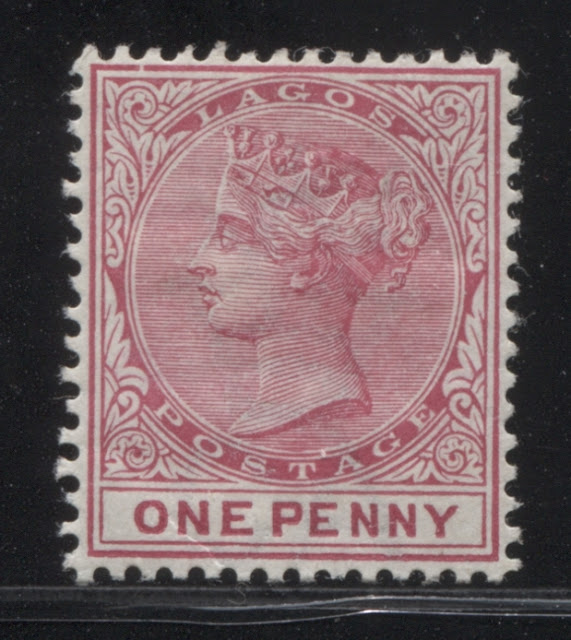 I think this one is probably the eleventh printing, sent out on December 13, 1886. The gum is the creamy double gum from the post April 1886 printings, and the hair and diadem is very clear, showing just the first signs of wear in the form of slight merging of the shading lines at the top of the hair and at the back of the head. This rules out its classification as a late plate 2 printing, so that leaves us with one of the first eleven printings. The gum characteristics indicate that it must come from either the tenth or the eleventh printing. The shades are completely different from stamp 4, with the head plate being deep rose carmine and the duty plate being printed in bright crimson.
Stamp 11 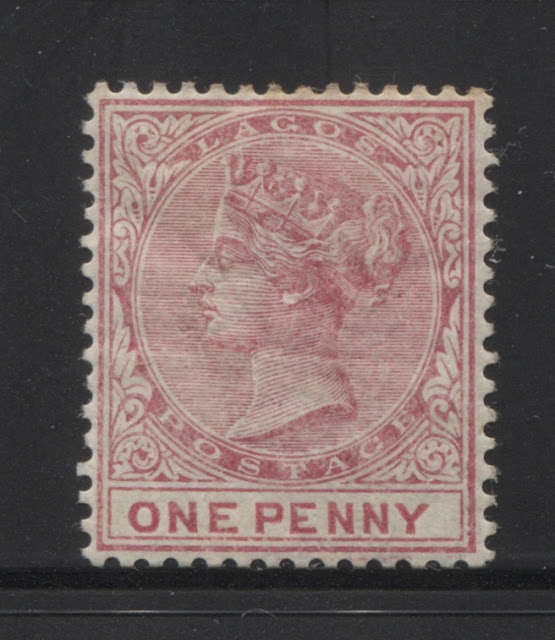 This stamp is a bit rubbed on the surface, which makes it difficult to assess the degree of plate wear. However, it appears to be a fairly early state of the plate. The gum is what compels me to place it in this period as it has a clearly crackly gum that places it among one of the first four printings made prior to July 1885. The colour of the head plate is a slightly deeper and duller version of rose-carmine, while the duty plate is printed in bright carmine.
Stamp 12 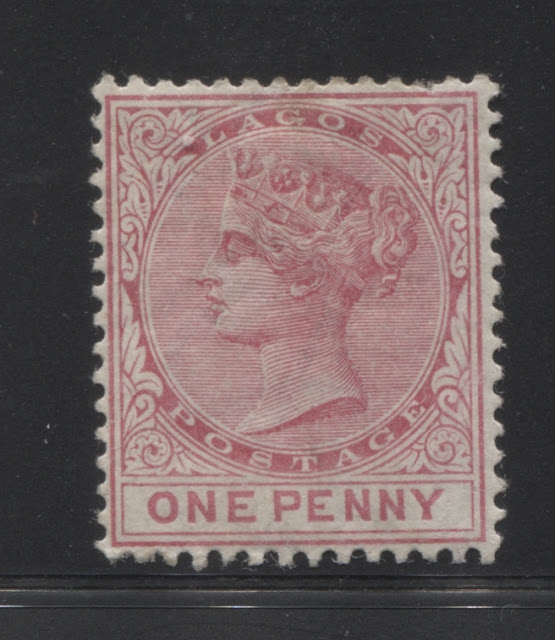 This stamp has a smooth, somewhat toned, single gum, which places it in the period between July 1885 and March 1886, so that it likely comes from either the sixth, seventh or eighth printing. Both the head and duty plate are printed in a deep shade of rose. 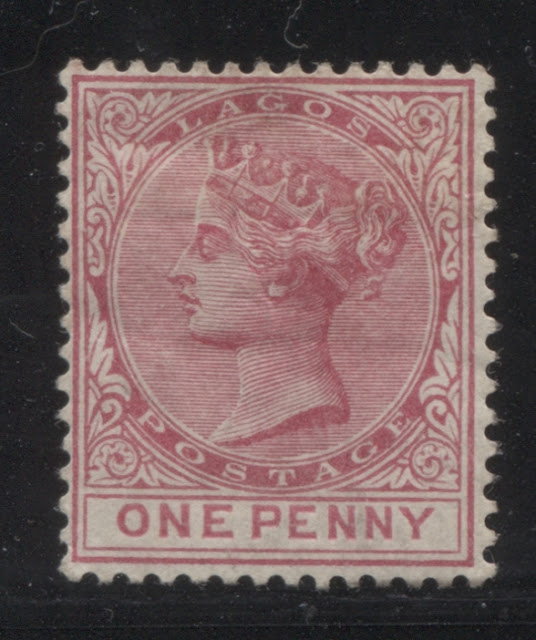 This mint stamp has the slightly crackly gum associated with the July 1885 printing, that I have seen on the 2d stamps that I have examined. This example shows very slight merging of the shading lines in the middle of the hair and at the back of the head. Both the head plate and the duty plate are printed in rose-carmine.
Stamp 14 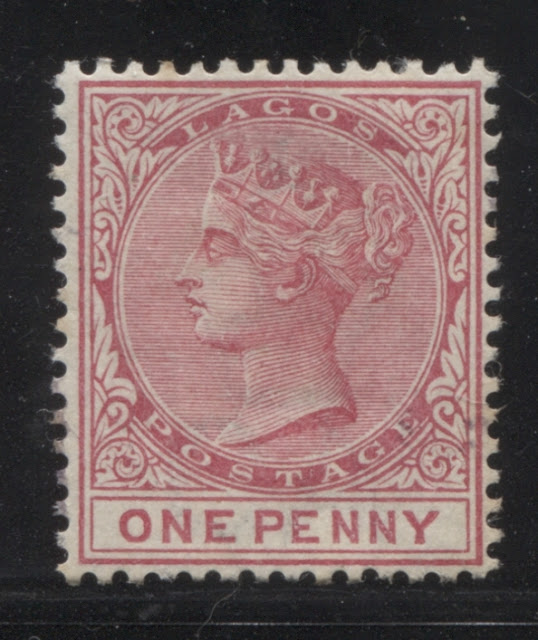 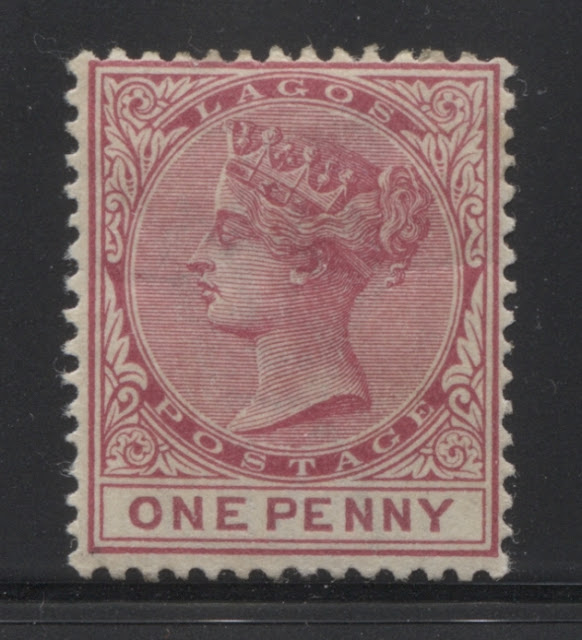 This stamp has the toned single gum that places it between September 1885 and March 1886. In other words, from either the sixth, seventh or eighth printings, just like stamp 12. The hair and diadem have clear, unmerged lines and are consistent with this period. The head plate is printed in deep rose-carmine, while the duty plate is printed in carmine-lake.
Stamps 16 and 17 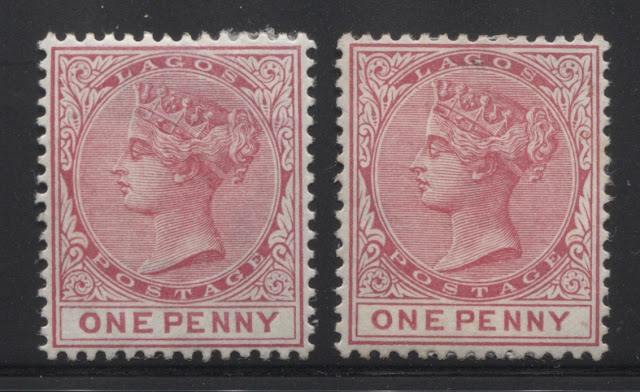 These two mint stamps have untoned gum, that appears to be a single layer, but could also be the later double gum. I think based on the similarity of the shades to stamp 12, that this is likely from either the sixth, seventh or eighth printing. The hair and diadem details are almost completely clear also. The head plate and duty plate shades are either a very deep rose, or a bright carmine that lacks the bluish undertone normally associated with carmine.
Stamp 18 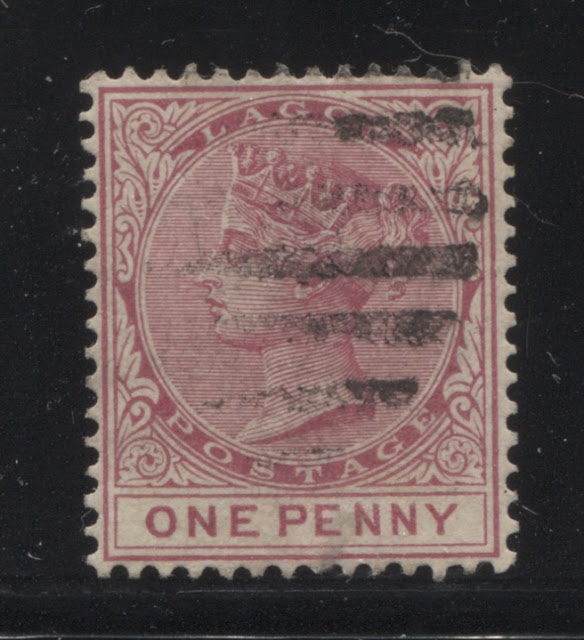 This used stamp is quite close to stamp 15 in shade, with the head plate being a little less intense than on stamp 15, and the duty plate being closer to pure crimson than to carmine-lake. Lake is a deep red that contains  very slight hint of brown, and while the duty plate of stamp 15 has this undertone, the duty plate of this stamp does not. This stamp is cancelled with a 9-bar oval obliterator. The hair and diadem show the very slightest hint of merging for some of the shading lines, so I would say that this stamp is from the same printing as stamp 15, and that this is the sixth printing that was sent on September 29, 1885.
Stamps 19 Through 24 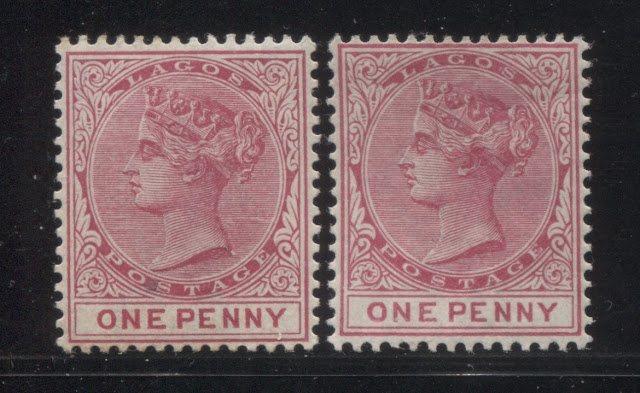 These mint stamps have the smooth cream gum associated with the later printings from this early period, but it does not have the thickness of the later printings from the 1887-1900 period. The shade of both the head plate any duty plate is very similar to stamp 10, and the hair and diadem show the very first signs of plate wear that places them in the eleventh printing, sent in December 1886.
The next scan shows four used examples, which I think also come from this printing:

These appear to be cancelled with a mixture of 8-bar and 9-bar oval obliterators. The first and third stamps from the left appear to be 8-bar types, while the other two appear to be 9-bar cancels.
Stamp 25 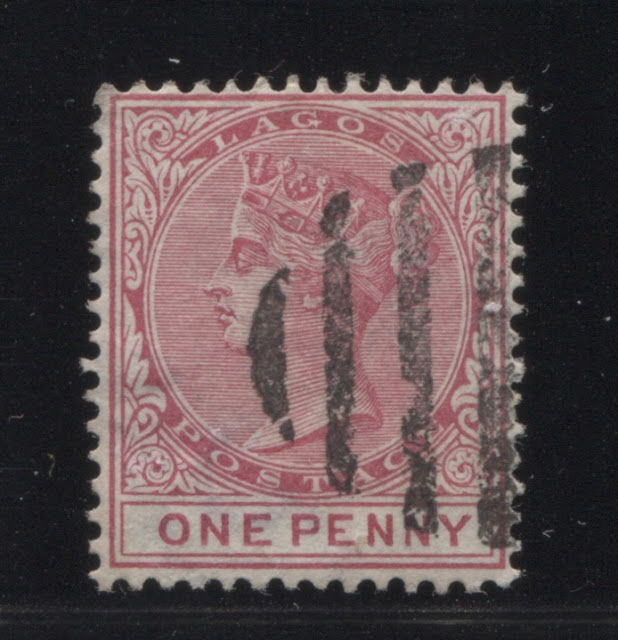 This used stamp is very similar to stamps 16 and 17, but with a very slightly bluish undertone to the carmine, but not so bluish that I would call it rose-carmine. I believe though that it comes from the same printing as these two stamps. It is cancelled with a 9-bar oval obliterator.
Final Conclusions
Despite having a lot of stamps to work with, I do not have all 11 printings. I am missing one of the first four printings. I have the first and I believe I have the fourth. I have one other stamp, which is either the second, or the third printing, but it is hard to be sure which. Then, it would appear that I have at least one example of printings five through eleven. In terms of ordering these in sequence, I would tend to look at the progression of shades, but it is difficult to be completely certain in this regard.
With all this in mind, my best guess as to the ordering of the stamps that I have showcased here into a logical sequence is as follows:
After much consideration, I do not now believe that the very stamp, stamp #1 belongs in this first period. It is very similar in shade to two or three other stamps that I have, which were cancelled before 1891. It is my belief that it is one of the earlier printings from the group of printings made between 1887 and 1900 when plate 1 was retired.
So that brings us now to the end of the pre-1887 printings. The next series of posts will look at all the Queen Victoria stamps of Lagos that were issued between 1887 and 1900. Fortunately we are greatly aided in this regard by a number of factors. Next week's post will be an overview post which will discuss the approach that I will take in unraveling this very complicated period in which a lot of printings were made. I will discuss some of the peculiarities which I feel will help aid in assigning the printings to approximate dispatch dates and outline my overall approach that I will take in studying and writing about these stamps.