Today, I look at the printings of the next high value stamps in this series: the 5 /- green and blue. According to Ince, 28,320 stamps were dispatched to the colony between March 1887 and August 1901, while 18.900 remainders were destroyed. This makes the net issued quantity of 9,420 stamps, almost identical to the 2/6, yet curiously the catalogue value of this stamp is significantly higher than the 2/6. In any event, the catalogue values are extremely low relative to the true scarcity of these stamps.  If we assume a survival rate in all grades of 10%, which is likely very generous, given that this is a West African crown colony, and not England or Canada, or some other country with a temperate climate and a population that is accustomed to preservation, then there are probably no more than 950 stamps in existence now - both mint and used.

As was the case with the 2/6 stamp, a denomination of this size would have seen little postal use, being used only for registered letters that had a high insurance value, larger parcels or bulk mailing receipts. This was a revenue issue as well, since it was inscribed "postage and revenue", and so some stamps would have seen revenue use, though interestingly, I have not come across many examples with fiscal cancellations, which suggests that they were not often used for this purpose, unlike the high value stamps of many other colonies were. Thus it is likely that many fewer printings were made, perhaps as many as 20, but unlikely more than this. Given the low rate of usage, it would be my expectation that there would be many late usages as stamps from the "bottom of the post office drawer" finally got sold and used up. Consequently, I would expect the remainder total of 18,900 stamps to have come from a large number of the printings that were left over when the next supply was received by post offices and placed on top of the old stamps.

I have 22 mint and 5 used examples of this stamp, which I will sort into printings starting with those made from the first state of the plate.

As it turns out, I did identify 18 separate printings:


I have not seen any examples from the fifth state of the plate, though according to Ince, the last printings were sent on August 19, 1901, so they should exist. The implication of the fact that at least 18 printings were made, is that it is quite likely that no more than 50 or 60 copies of each printing still exist today, though it is more likely that a few of the common printings exist in greater quantity and that the scarcer ones exist in less quantity. At any rate, these are extremely scarce stamps in any grade. Postally used examples are at least 10 times scarcer than mint and examples having their full original colour are likely 30-40 times scarcer than mint. So even though they are priced higher than mint in Gibbons, they are still vastly undervalued in my opinion.


There were almost four years from 1887 through to the end of 1890, which suggests a little more than one printing per year. From 1890 to the end of 1893 is 4 years again, which suggests close to 2 printings per year. From 1894 to 1899, it seems that the number of printings dropped to almost one every 2 years. Then from 1899 to 1901 it likely increased back up to 1 printing or so per year.
There were a few instances in which the apparent state of the plate was inconsistent with other characteristics such as colour and gum, that would point to the stamp being from an earlier printing. In these few cases, I have allowed the other characteristics to prevail and have treated the apparent worn plate as an example of over-inking instead.

As stated in all my earlier posts, the first state of the plate is characterized by nearly all of the fine detail in the hair, jewels and diadem being clearly visible and with little to no merging of the hairlines at the top of the head, and most detail of the hair at the very back of the head visible both above and below the diagonal ribbon.

The head plate colour of this printing is closest to Gibbons's deep green, but perhaps just a touch duller. It is however not dull enough to be the deep dull green. The duty plate colour is closest to Gibbons's dull ultramarine, although the colour is a little darker than the Gibbons swatch.
I have no used examples of this printing, but just the four mint examples shown above. In fact, I have more mint examples of this printing than any other. This suggests that many of the remainders may have come from this first printing.
The stamp on the top left shows a defect on the "F" of "Five" which I call the "Concave F". It is significant in my opinion, given that none of the other letters on any of the other stamps show any defect. Whether or not it is a constant variety is a matter for further study, though it will probably never be possible to plate it, as there are, to my knowledge, no surviving sheets.
The scan below shows a close up of this flaw: 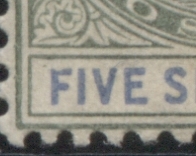 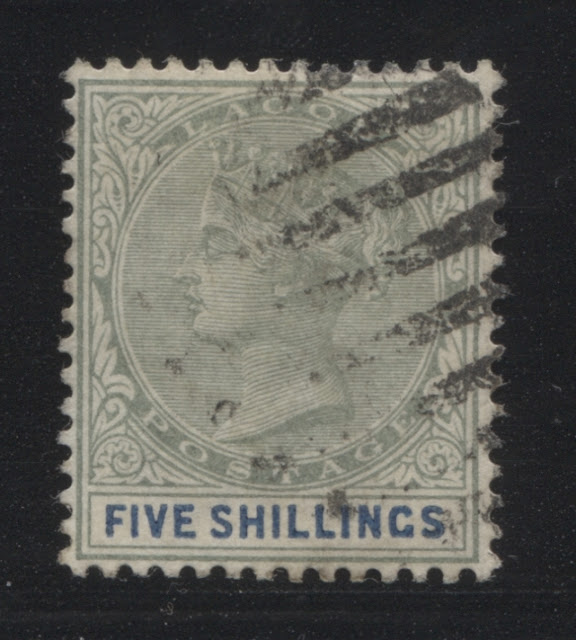 The head plate colour of this printing is a very close match to Gibbons's dull green.  The duty plate colour is closest to deep Prussian blue. Although this is a used example, cancelled with a Lagos 8-bar oval obliterator, there is no evidence that the colour has been affected in any way by exposure to moisture. 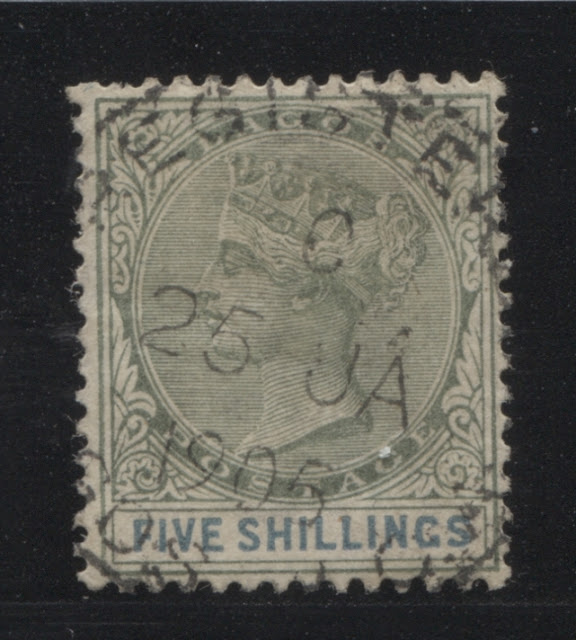 The head plate colour of this printing is closest to Gibbons's deep dull green, with a tiny hint of a bluish undertone, but not nearly enough to make it a match to any of the blue green shades. The duty plate colour is closest to Gibbons's Prussian blue, but perhaps a bit paler.
Like the last printing, I have no mint examples and only the used example above. It is cancelled with a very nice example of a registered oval from Lagos, dated January 25, 1905. Registered ovals are hardly ever seen on this issue, and this is a very late use, which supports the notion that I expressed earlier, that a significant number of early printings were not sold from post office stocks until just a few years before the entire issue was replaced by the King Edward VII issue.
Fourth Printing 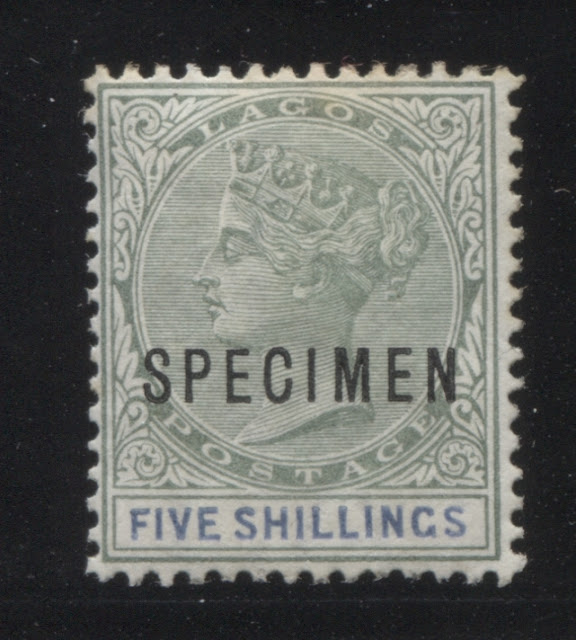 The Gibbons colour key has a swatch for deep bluish green and one for blue green, but not for bluish green. The head plate colour of this printing is closest to a pale version of the deep bluish green, so in other words: bluish green. The basic difference between blue green and bluish green is that blue green contains a pretty even mix of blue and green, whereas bluish green contains a lot more green than blue. It is basically a green with a hint of blue. The duty plate colour is closest to Gibbons's deep dull blue. The colour is a bit deeper than the Gibbons swatch, but is not deep enough to be steel blue.
This mint specimen example is the only example that I have of this printing, and it shows that the specimen overprints continued to be produced after 1887, albeit in very small quantity.
Fifth Printing 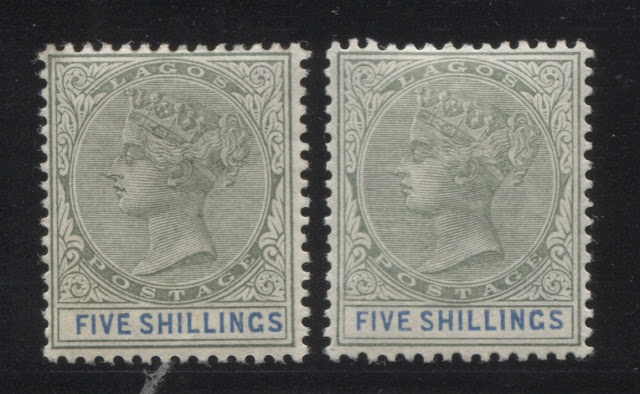 The head plate colour of this printing is very similar to the bluish green, but with a hint of yellow, which makes it a much closer match to Gibbons's dull green. The duty plate colour is closest to Gibbons's blue shade, but just a touch darker.
Sixth Printing 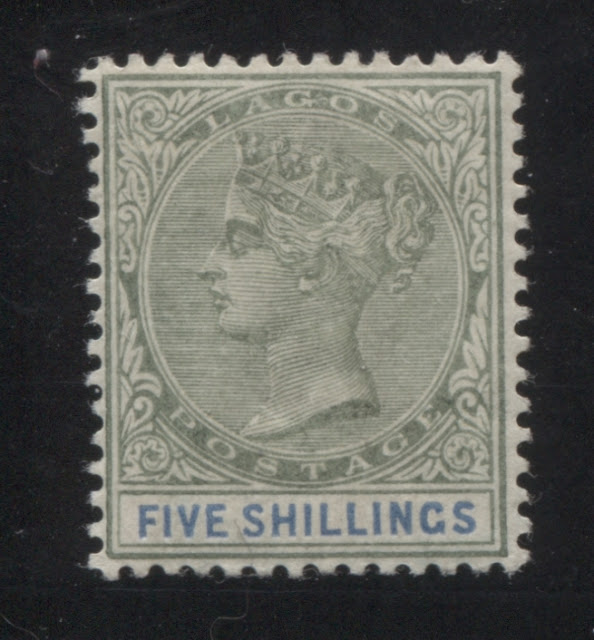 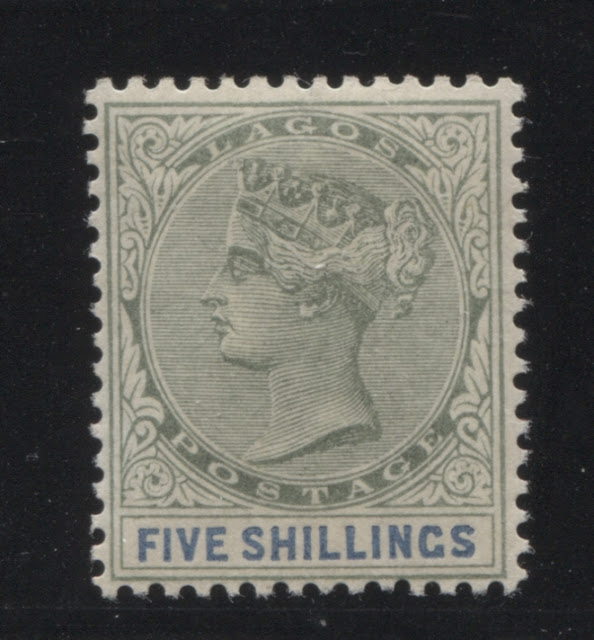 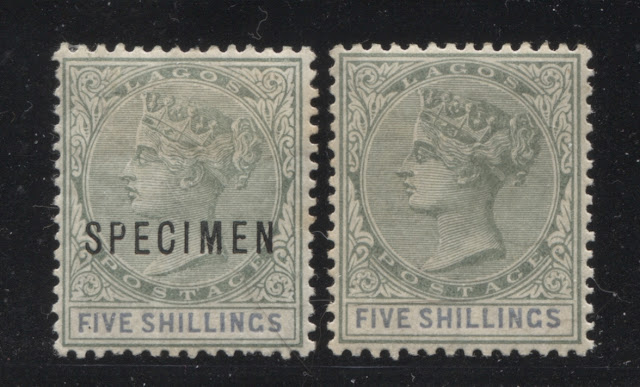 The head plate colour is both dull and bluish. But the problem is that it does not match the gibbons swatch for dull blue green at all. If I look at the swatch for myrtle green and imagine it being paler and a little duller, I get an almost perfect match to this colour. So I would call this the pale dull myrtle green. The duty plate colour is an almost perfect match to Gibbons's deep grey blue.
The specimen overprint on the first stamp above shows a clear defect on the "P", which may or may not be a constant flaw. A close-up scan of this flaw is shown below: 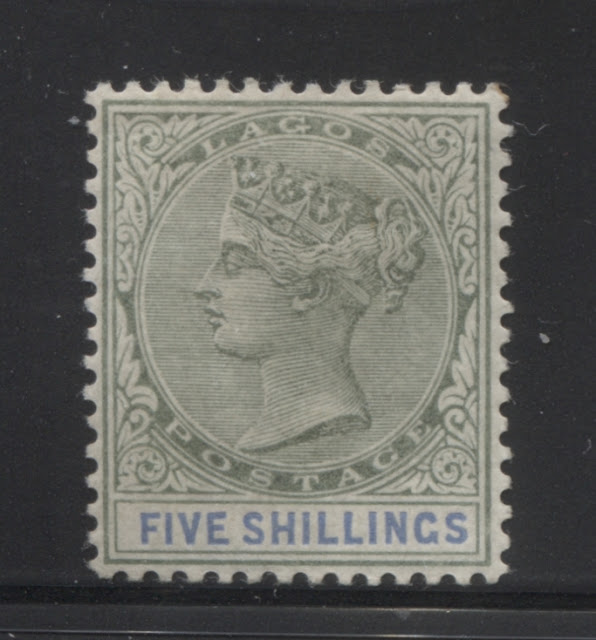 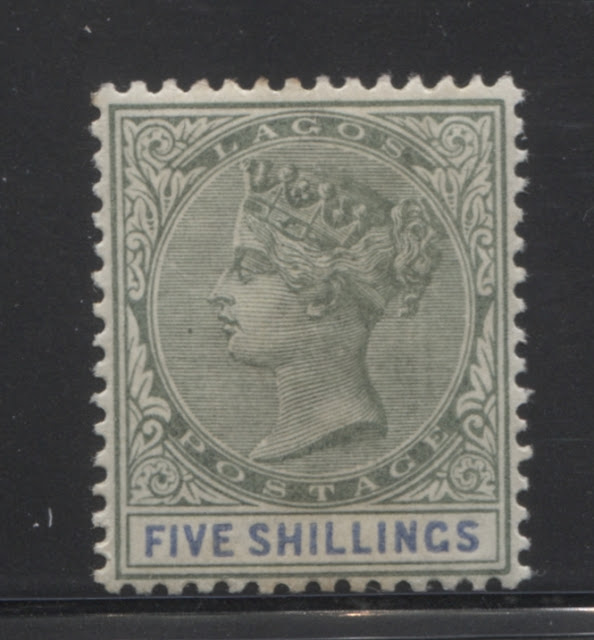 The head plate colour of this printing is closest to Gibbons's deep dull green also, but the colour is just a bit deeper than all the other deep dull greens of the other printings. Again, the duty plate colour is closest to Gibbons's blue shade, but the colour here is just a bit deeper, though not as deep as the deep blue.
Eleventh Printing 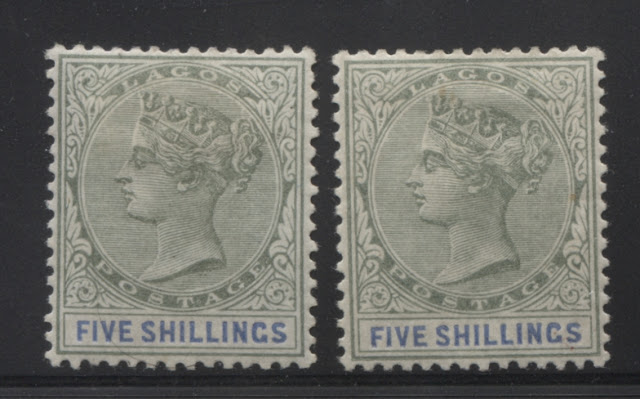 The head plate colour of this printing is closest to Gibbons's dull blue green, but is deeper. So I would call it the deep dull blue green. The duty plate colour is closest to Gibbons's deep ultramarine.
This is one of the few printings for which I have both mint and used examples. The sole used example is another late use, though not as late as the earlier printings I have looked at so far. It is cancelled with a lovely strike of the 24 mm Lagos CDS, dated April 13, 1898.
Thirteenth Printing 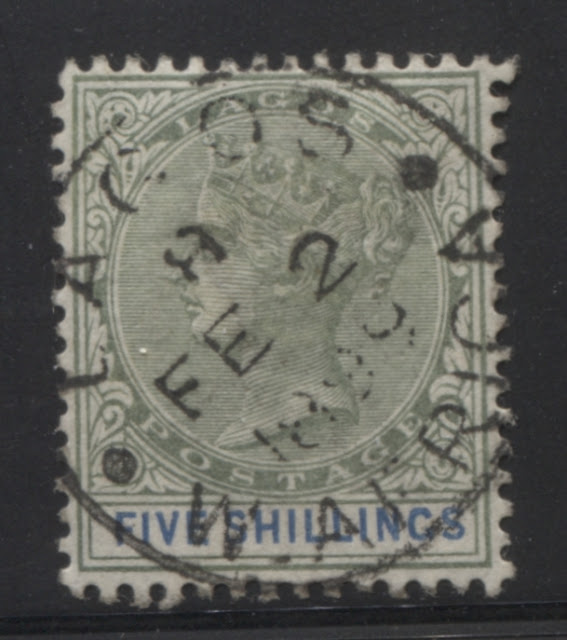 The head plate colour of this printing is a perfect match to Gibbons'd deep dull green. The duty plate colour is closest to Gibbons's deep dull blue, but is a bit darker and just a touch brighter.
This is another printing for which I have only a single used example. This one shows no evidence of being affected by water, as the colours look completely original. The cancel is a beautiful strike f a 23.5 mm Lagos CDS, dated February 2, 1899.
Group 3: Printings 14-16 From the Third State of the Plate - 1894 to 1899

As stated many times in other posts, the third state of the plate is characterized by a lack of detail in the hair at the back of the head, especially the hair above the diagonal ribbon. There is also merging of the top three to five hairlines at the top of the head. 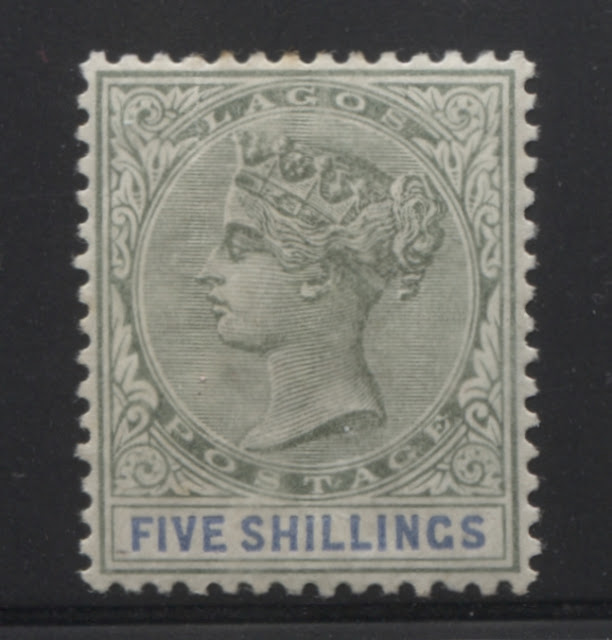 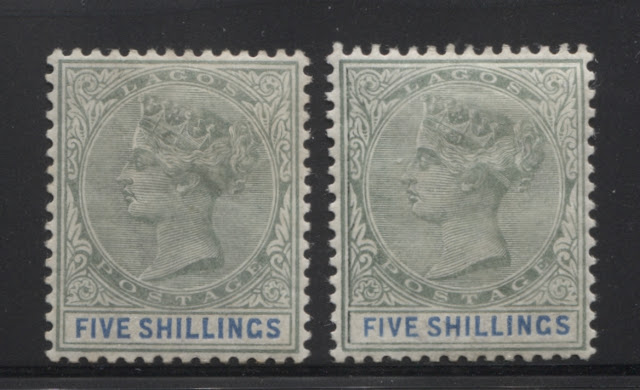 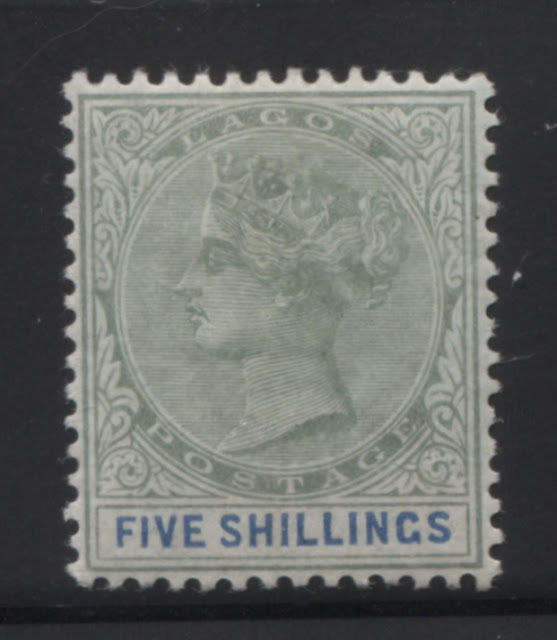 The defining characteristics of this state of the plate are the almost complete loss of detail in the hair at the back of the head, and merging of the hairlines above the crown to the point that only a narrow band of hairlines in the middle retain their detail. The horizontal shading lines in the band of the crown are beginning to merge together. 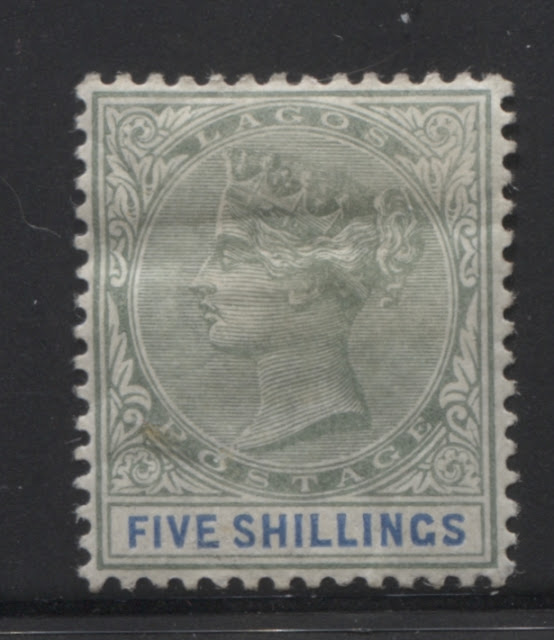 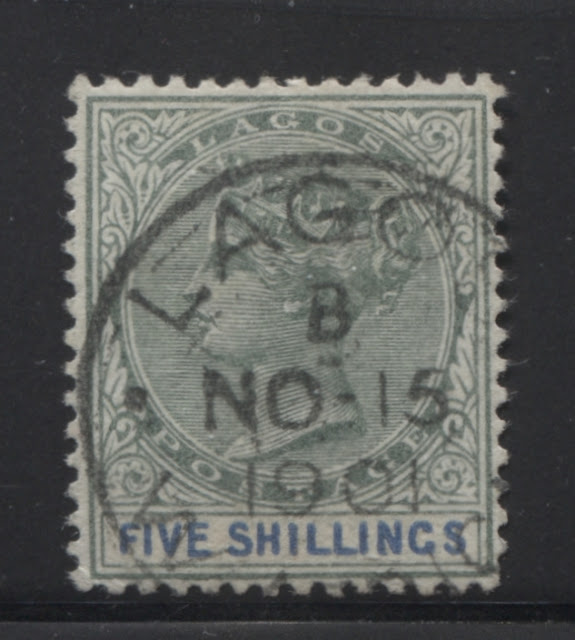 This is easily the most distinct colour combination of any of the printings examined so far. The frame plate colour is a paler version of Gibbons's bottle green. The duty plate colour is closest to the Gibbons's blue shade, but much more intense. It is not dark blue, because dark blue would contain black, which this does not. So I would call it intense blue.
This sole used example is canceled with a nice strike of a Lagos CDS, dated November 15, 1901. It appears to be somewhere between 23 and 24 mm wide, which would make it from a subsidiary post office, as those of the Lagos GPO were always 24 mm wide.
So this concludes my examination of the 5 shilling Lagos keyplate stamp of Queen Victoria. As you can see, there was a wide range of blues in the duty plate, with the blue shade being the most common. There was less variation in the head plate, with the common colour being deep dull green, and the dull greens and dull bluish greens being much less common. This leaves only three values in this series before I move on to the Edward VII issues: the 10 shilling, the halfpenny and the one penny. Next week I will cover the 10 shilling, and then in the following weeks, I will attempt to unravel the very complex halfpenny and one penny stamps.
Filed in: Lagos - 1887-1903 Crown CA Issue