According to Ince, 86,460 stamps were dispatched between March 31, 1887 and August 4, 1900. Of this number, 26,220 were unsold at the end of 1903. It is not clear whether or not the 86,460 includes the plate 2 printings. My guess is that it does not, but the 26,220 does include remainders from this printing. The relative prevalence of used examples from this last printing relative to mint examples will give us some idea of whether or not this is actually the case. The period covered by these releases is 13 years, or 53 calendar quarters. So, if one assumes that new supplies were sent to Lagos every quarter, the absolute maximum number of printings that could have been sent is 53, and the number of stamps sent each time would be 1,629 on average each time. Of course, there probably were not that many printings, given that this would have been one of the less commonly used stamps at the time. However, it is probable that at least 25 printings were made, and maybe as many as 30 or so.

One problem that complicates the classification of printings on this stamp is the fact that the green ink is doubly fugitive, and highly susceptible to fading from exposure to moisture. The original colour is usually a dull yellowish green or dull blue green. When this fades, it first turns to blue green, but not dull blue green, then bright yellow green and then to bright greenish yellow. So used stamps in those shades are faded, and are of little to no use in classifying printings. However, as long as the colour retains the overall dull tone, than it should be assumed, unless there is persuasive evidence to the contrary, that the colour is original. some used examples will be found that have gum. These generally have been sweated off the envelopes in order to avoid exposing the ink, and the colour on these should be good unless it has clearly faded. 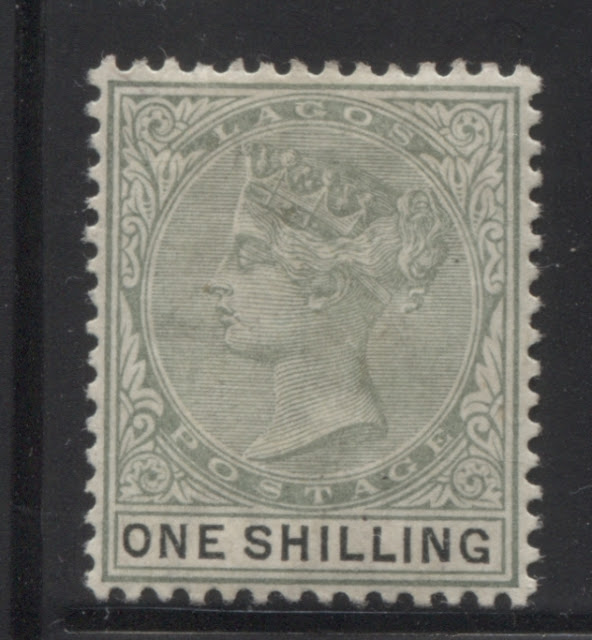 The head plate colour of this printing is a very close match to Gibbons's grey green, only this shade is paler.
I have no used examples of this printing, and just the single mint copy shown above.
Second Printing 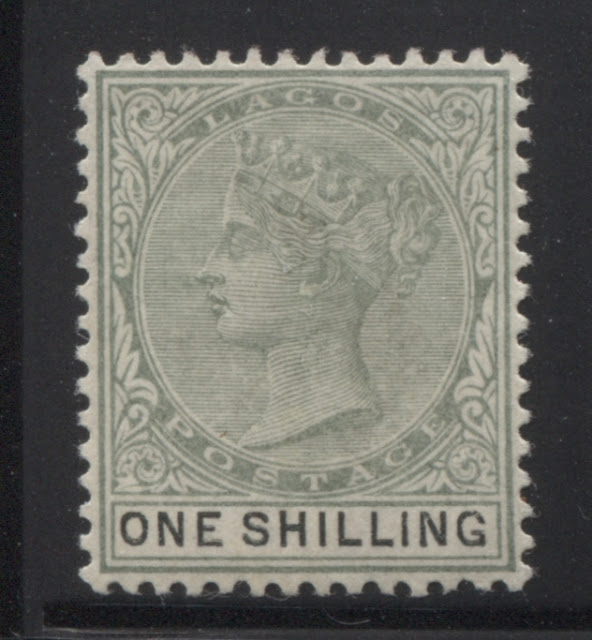 The shade of this printing is very similar to the last in that it is closest to pale grey green, except that is is just ever-so-slightly deeper in tone than the shade of the last printing.
Again, I have only the single mint example shown above, and no used examples.
Third Printing 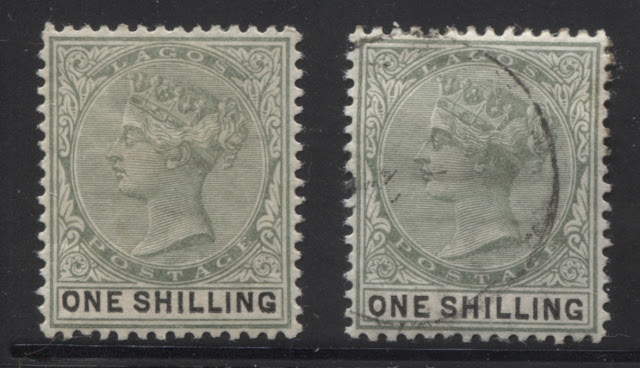 The head plate colour of this printing lacks the greyish undertone of the first two printings above, appearing somewhat yellowish in comparison. It is not however, a yellow green in its own right. It is closest to a deep version of Gibbons's deep dull green. It is quite a bit duller though than the deep dull green shown on the Gibbons colour key.

Here I have one mint example and a used example that has a completely unreadable CDS cancel. This later stamp has full original gum, so it is possible that this is a false cancel that was added posthumously, since the used stamps of this value are generally worth quite a bit more than the mint. 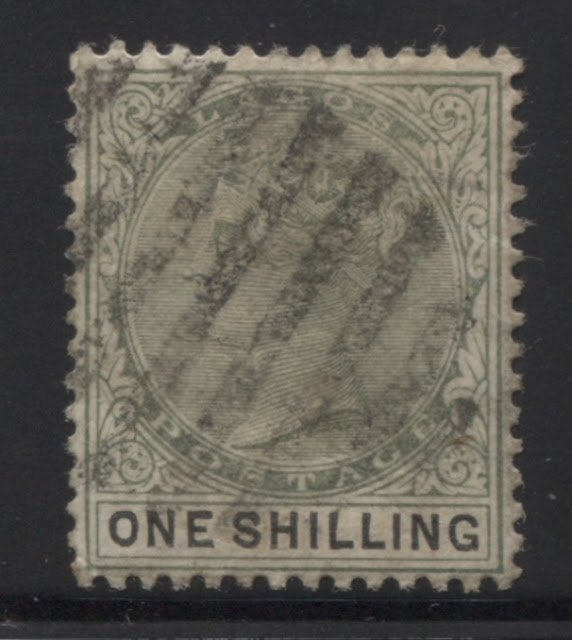 The shade of this printing is just a touch yellower than the shade of the third printing, this being a very close match to Gibbons's deep dull green. Although there is quite a yellowish tone, it does not appear to be faded.
I have no mint examples of this printing, and the sole used example that I do possess, is cancelled with what would appear to be a clear strike of a 9-bar oval obliterator.
Fifth Printing 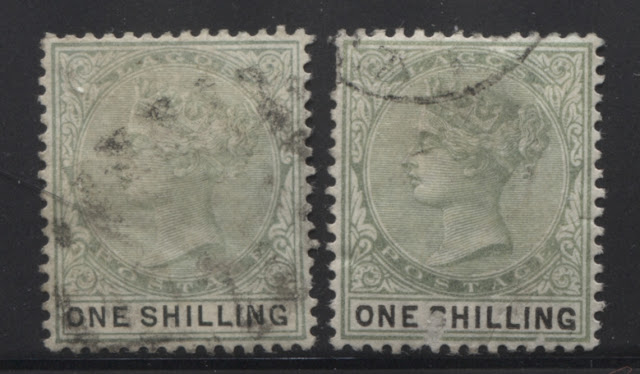 On this printing, the head plate shade is a soft version of the deep dull green. It is brighter and slightly more bluish compared to the shades of the third and fourth printing.

I do not have any mint copies unfortunately which would corroborate the shade. The colour on the second used example on the right appears to be fairly intact, but the stamp is faulty. The first stamp on the left unfortunately is somewhat faded, with the solid areas of colour to the left and right of the medallion being used to match the colour. This first stamp appears to be cancelled with an 8-bar oval, while the second stamp appears to be cancelled with a strike of a 24 mm Lagos CDS. 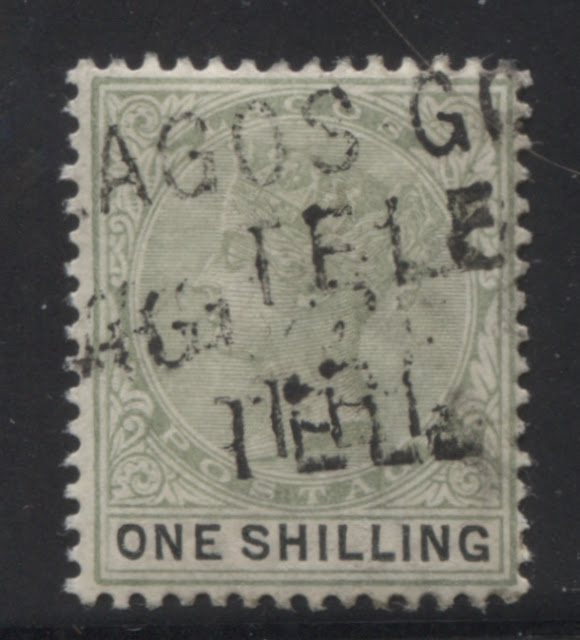 This printing is printed in the most pale shade of all these first printings. While the shade is pale, I don't think it is faded, because it is dull. It is closest to Gibbons dull blue green, but much, much paler. So I would call this the very pale dull blue green.
This sole used example is cancelled with the straight line "Lagos Government Telegraphs" Cancellation. 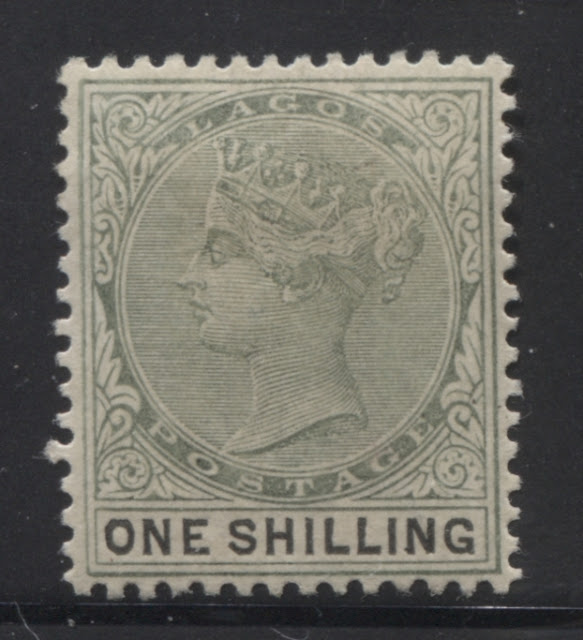 The head plate shade of this printing is quite similar to the third printing. It is quite close to Gibbons's deep dull green, but is just a bit duller.
I have one single mint example, as shown above, and no used examples.
Eighth Printing

The head plate colour of this printing is an almost perfect match to Gibbons deep dull green.

I have two mint examples as shown above, and two used examples. The first of the used stamps matches the shade almost perfectly, and is cancelled with a nice strike of a 21 mm Lagos CDS, with the 4 mm space between W and A, and dated June 27, 1894. This is likely a year or two later than this printing was released, but that is not a particularly late usage, as far as late usages from this issue go, especially given the low volume nature of the use for a stamp of this denomination. The second stamp appears quite yellowish by comparison, but I think the colour is slightly faded, which is why the colour has taken on that yellowish tone. I think that the underlying colour is the same as the other stamps. This one though is a much later use, being cancelled with a 22 mm Lagos CDS dated November 27, 1899. 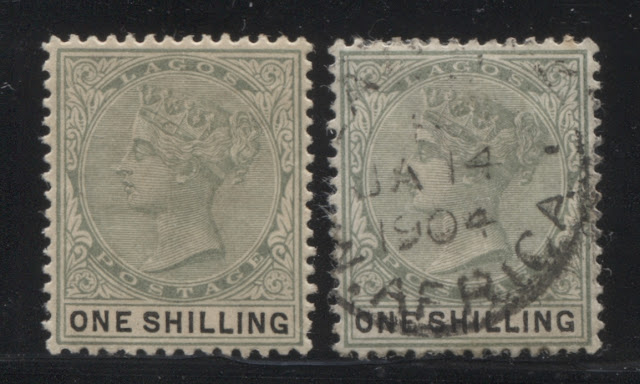 The head plate colour of this printing is closest to Gibbons's dull blue green, but just a bit deeper.

I have one mint example and one used example as shown above. The used stamp is a very, very late use, being canceled with a 24 mm Lagos CDS dated January 14, 1904. That would suggest the possibility of it being from plate 2, but that possibility is quickly ruled out by the fact that it is from the second state. The plate 2 stamps have a much crisper impression, and so this is simply an extremely late usage of this printing.

The colour of this printing is very close to being a perfect match to Gibbons's dull blue green. It is very, very slightly paler than the Gibbons swatch.

I have three mint examples, as shown above, and one used example. The used example is cancelled with an unreadable CDS, which looks like it might be a 24 mm Lagos CDS. On the other hand, it lacks the side dots and it may simply be another example of a posthumous cancel that was applied to a mint stamp to create a more valuable used stamp. However, it is not a particularly attractive strike, which tends to support the notion that it is a genuine contemporary cancellation. 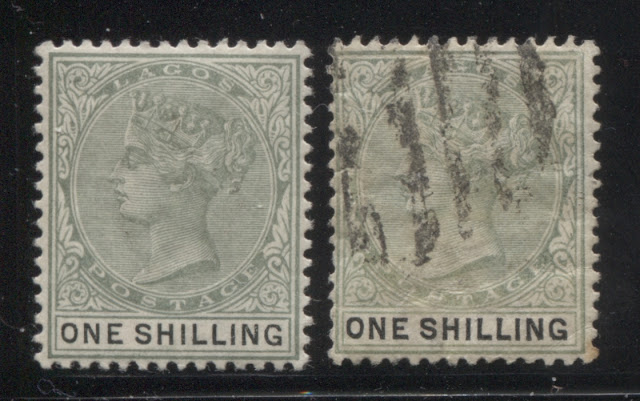 The head plate colour of this printing, is once again, closest to Gibbons's dull blue green. In this case, the colour is just a touch brighter than was the case on the tenth printing.
I have one mint example and one used example, which has suffered from some slight fading of the colour. This used example is cancelled with what appears to be a wide example of an 8 or 9 bar oval obliterator, like the type used at Ibadan. 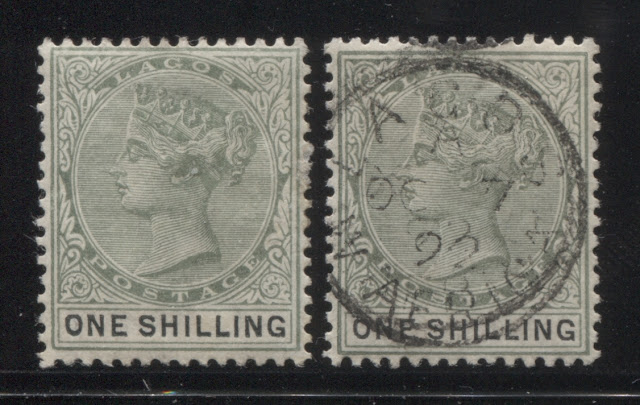 The head plate colour of this printing is similar to the dull blue green, but is both deeper and brighter. Yet, it is not bright enough to be simple blue green, and it is too bluish to be deep dull green. Therefore, I would call this colour deep dull blue green.

I have one mint example, and a beautiful used example, shown above, which has been cancelled by a superb strike of the 21 mm Lagos CDS, with 3 mm space between W and A, and dated October 7, 1892.

The head plate colour of this printing is closest to Gibbons' deep dull green, perhaps with the slightest hint of blue to the green, but not enough for it to be a blue green shade.

I have three mint examples and two used examples as shown above. The used example on the right has been floated off the envelope of form that it was attached to, and has just begun to be affected by moisture, turning that unmistakable bright blue green colour. The first used example is cancelled with a partial strike of what appears to be a 9-bar oval obliterator. 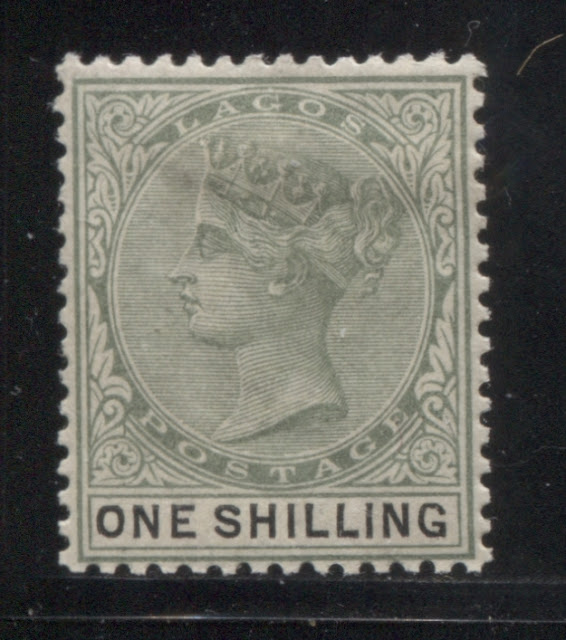 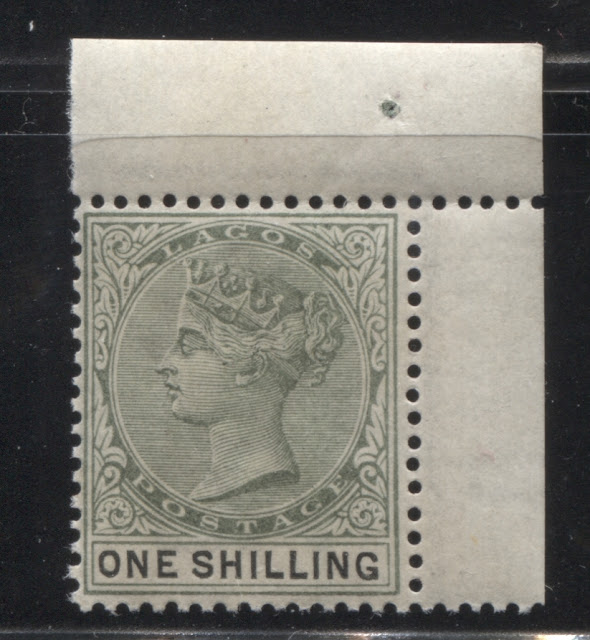 The head plate colour of this printing is a perfect match to Gibbons's deep dull green. The colour does not contain any hint of blue or yellow.
I have only the mint NH example shows above, which comes from position 10 of the sheet.
This concludes my review of the printings of this stamp that come from the first state of the plate. Next week, I will look at the third state of the plate, and possibly the fourth if I have time.

Before I end, I want to show some examples of what the severely faded used stamps look like. The scan below shows 4 used stamps, all from this state that are severely faded to the point that they cannot be used to identify specific printings: