According to my first post about these stamps, I had hypothesized that there should be three printings of the 1/2d stamps from this state. These printings should have been made and released in the colony between April 1894 and about April 1897. Consequently, on the used stamps we should start to see the disappearance of the barred oval cancellations and the 21 mm Lagos CDS's and the appearance of the wider 24 mm Lagos CDS's and CDS's of other towns like Badagry. Ibadan, Abeokuta and the like.


As stated in previous posts the third state of the plate is characterized by the first definite signs of plate wear. These show as an almost complete loss of fine detail in the shading of the hair ball that is at the back of the head just below the chignon. The 3-5 hairlines located at the top of the head are either fully merged together, or partially merged together. However, the other fine details in the hair are all still visible.
As it turns out, I found seven groups of stamps from this state that all differ slightly in the head and duty plate shades. This suggests one of three things:
I believe that the third scenario is the most likely one here, given the overlap in dates on those used stamps with CDS postmarks. While there are quite a few Ibadan Post Office CDS's and a few wider Lagos CDS postmarks, most of the used stamps in this group are still cancelled with the 21 mm Lagos CDS's and barred oval obliterators.
This represents many fewer printings than were made before, and would suggest that one large shipment was now sent to the colony each year. This would be consistent with the post office's desire to avoid the shortage that had happened in August 1893. As expected, I have a larger number of stamps from these three printings.
Now, let's take a look at the stamps.
Group 3: Printings 34-37 From the Third State of the Plate - April 1894-April 1897
Thirty Fourth Printing

This printing has the most distinct shades of all the stamps in this group. All three of the examples that I have are either unused without gum, or mint. I do not have any used examples. The head plate and duty plate colours are identical. The colour is closest to Gibbons's deep green shade, but is a little bit duller. It is not deep enough however, to be the deep dull green.

In this printing, the head plate and duty plate colours are also identical. The colour is duller than the the 34th printing. It is actually very close to Gibbons's grey green, being just a little bit lighter and bluer.
I have four mint examples and one used example as shown above, and one mint plate 1 strip of three from the bottom right corner of a sheet, as shown below. The used example appears to be cancelled with a 9-bar oval obliterator. 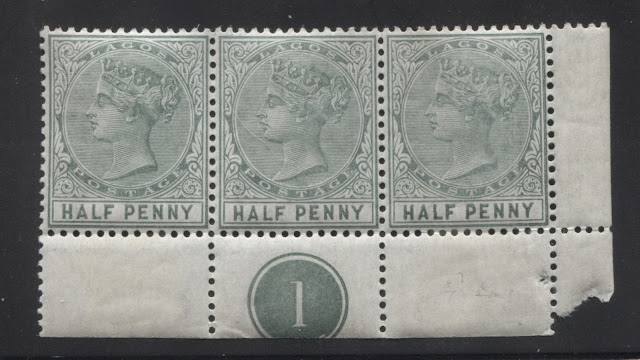 Here is the first one: 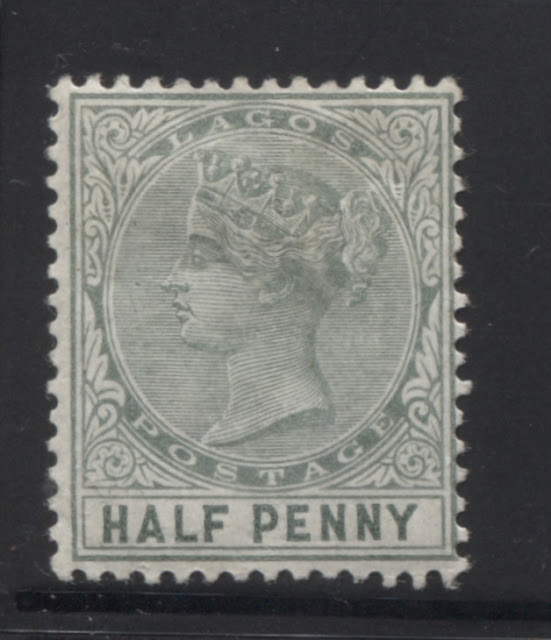 The head plate colour of the above stamp is a very close match to Gibbons' grey green shade, while the duty plate colour is deep dull green.
All the other stamps in this printing are shown in the scans below:

I have seven mint examples as shown above, and nine used examples, as shown below: 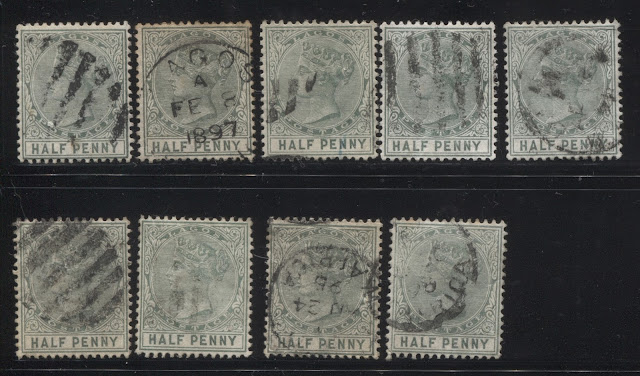 Here we have all three major types of cancellations. Three stamps in the top row and two in the bottom row are cancelled with 8-bar oval obliterators. The second stamp in the top row is a nice example of the 24 mm Lagos CDS, dated February 8, 1897. The two lower right stamps have been cancelled with the earlier 21 mm Lagos CDS's. The date of the one on the left is August 24, 1895, while the right one is not entirely clear, but is sometime in 1898.

In this printing, the duty and head plate colours go back to being the same, but there would appear to be three groups of shades that are very slightly different from one another.

The first of these shade combinations consists of one mint example, and eleven used examples as shown below: 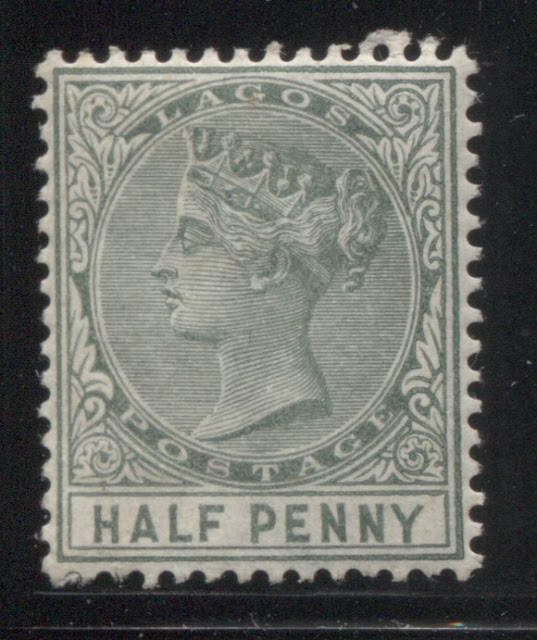 The head and duty plate colour is closest to Gibbons's myrtle green, but is both slightly duller and lighter.
The eleven used examples that I have are shown below:

Here we have an example each of the 8-bar and 9-bar oval obliterators, as well as three of the 21 mm Lagos CDS's postmarks. They all appear to be the type that have the 3 mm gap between the "L" of "Lagos" and "W.". In the top row there are two nice examples of the "Post Office Ibadan" CDS cancels, dated October 15, 1897 and January 24, 1898, which is a few months later than the end of the period covered by these printings, but not that long. On the bottom left are two nice strikes of the 24 mm Lagos CDS, dated March 8, 1897 and April 13, 1897.

The next combination of shades is shown in the 7 mint stamps, 2 used stamps and mint block shown below:

The head plate colour and duty plate colour are a very close match to Gibbons's grey-green, except that this colour has a bluish undertone. Therefore I would call it the bluish grey-green.

Both the used examples above are cancelled with 8-bar oval obliterators.

This group contains a plate flaw which may, or may not be constant, but is nonetheless striking, It consists of a small circular void in the horizontal medallion shading to the upper right of the Queen, just below and to the right of the "S" of "Lagos". It is the first flaw of it's kind that I have encountered on these stamps, which always seem to have perfect, unbroken shading lines. It is the second mint stamp in the top row of the above scan. A close up scan of the flaw is shown below: 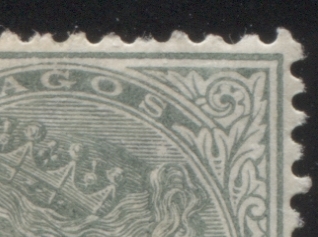 I have examined the surface of the stamp carefully and can say with 100% certainty that the break in the shading lines shown above is not caused by a scuff, or damage to the paper surface.
Here is a beautiful, mint never hinged block of stamps from this printing: 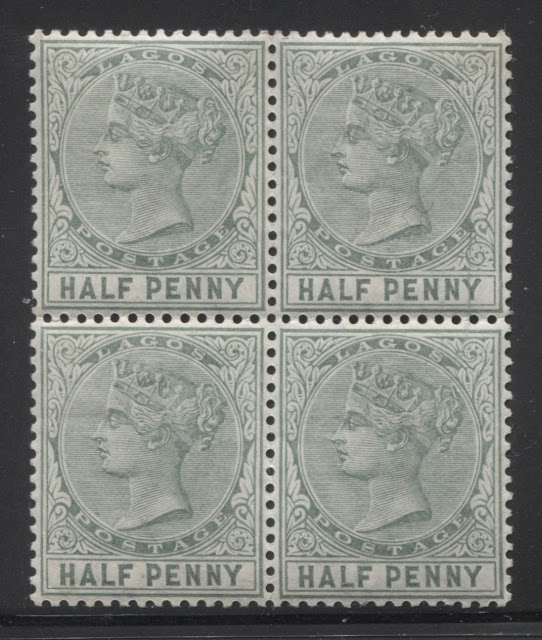 The last shade combination in this printing is shown by the six mint and nine used stamps shown in the next two scans below: 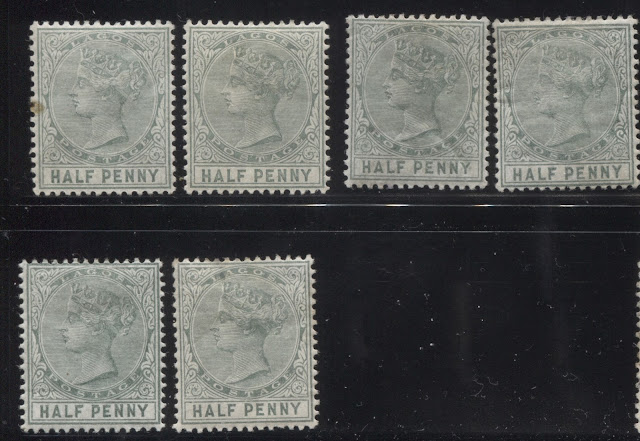 The head plate and duty plate colour of this printing is very similar to the last, but it is paler and slightly more bluish. It is really a cross between the dull blue green and the grey green on the Gibbons colour key. I would thus call it the dull greyish blue green. 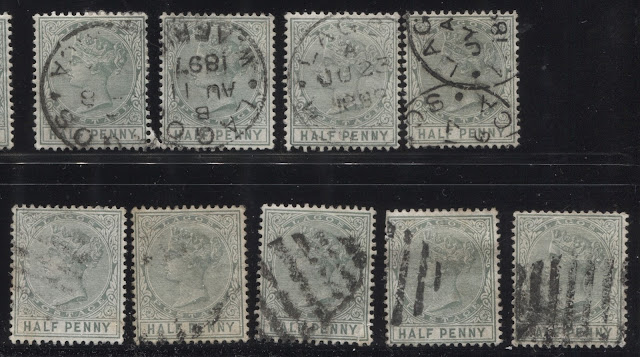 The used examples, again show a fairly high proportion of 8-bar oval obliterators, with all the stamps on the bottom row being so cancelled. All the stamps on the top row are cancelled with the 24 mm Lagos CDS cancel that came into widespread use, starting in 1897. The two clear dates that I can see here are August 11, 1897 and June 23, 1898. It is on the basis of these dates, combined with the large number of 24 mm CDS's that I have classified this printing as the last one in the group.
This concludes my discussion of the printings from the third state of the plate of this value. Next week, I will limit my coverage to the third state printings of the 1d, of which there should be five. I am expecting to find a fairly large number of stamps, so I think it best to stick to that value, and then I can deal with the fourth state in one post.
Filed in: Lagos - 1887-1903 Crown CA Issue