Today's post will deal with the fifth, and along with the 4d, one of the most complicated denominations of this first issue of Lagos, the 6d green. Seven printings were made of this stamp between May 12, 1874 and May 13, 1875.

This post will attempt to explain how to distinguish the seven printings of these stamps using the following characteristics:

There appears to be quite a bit of overlap in the usage dates, which suggests quite strongly that the subsequent printings were ordered, and received well before the earlier supplies had been fully exhausted. Indeed, my classification of the printings is my best guess, based on the relative number of different dates in each group. Thus each printing may have stamps dated in July 1875 for example, but if most of the dates in one group are later than most of the dates in another, then it is reasonable to conclude that the stamps of the first group are from a later printing than the group with the mostly earlier dates. One thing that makes this value more difficult to sort is that the number of shades on this stamp is greater than the number of printings. However, many can be grouped in such a way that the number of groups corresponds to the seven printings.
First Printing - Dispatched May 12, 1874 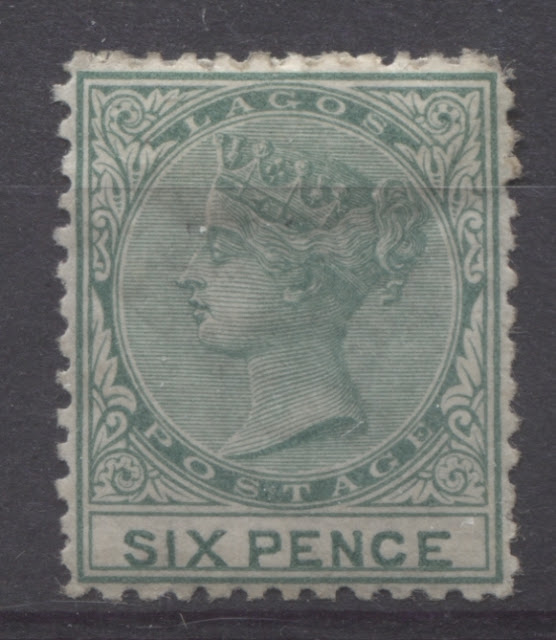 The first printing is the scarcest of the seven, consisting of a mere 34 sheets of 60, or 2,040 stamps. It is identifiable by the shade, which is deep green and dark green. The head plate is printed in deep green, while the duty plate (words of value) is printed in a slightly darker shade. This suggests printing in two operations. I identified this as the first printing on the basis of the fact that it has the earliest cancellation I have seen - June 18, 1874, which pre-dates the dispatch of the second printing. 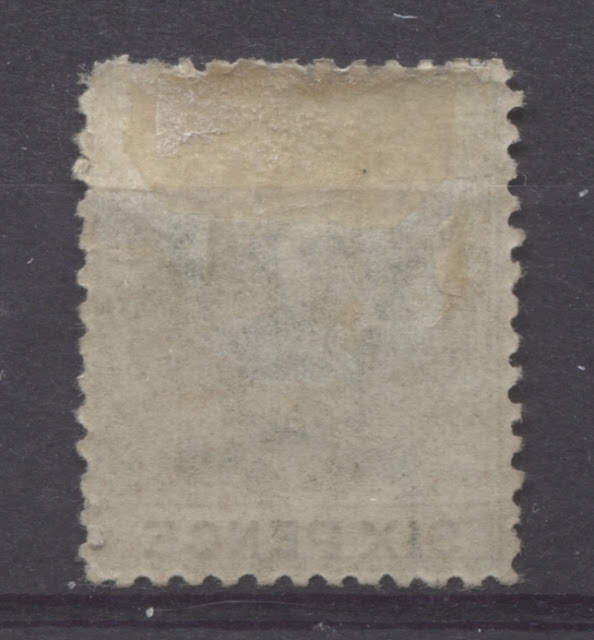 Here is the back of that stamp. The gum is smooth, thin and colourless, as is the case with gum during the crown-CC period. This paper is smooth, with no distinct mesh.
The scan below shows two used examples, one having the June 18, 1874 Lagos CDS, with timecode B, and the undated Lagos CDS, also with timecode B: 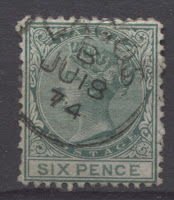 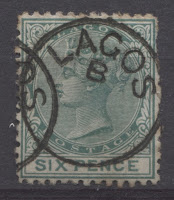 And the backs of these stamps: 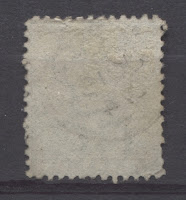 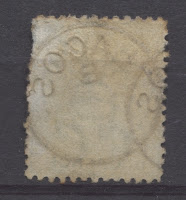 As you can see, the paper is smooth, with no clear mesh being visible - consistent with other first printings of the series. 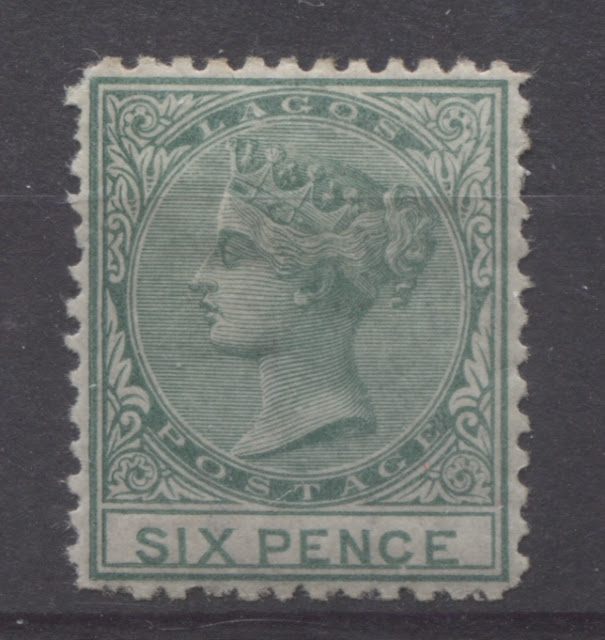 This printing is the second rarest, with only 36 sheets of 60 being printed, or 2,160 stamps. On this printing, the colour of the head plate, and the duty plate (words of value) are the same deep green shade. This tends to suggest printing from a single operation, from a single batch of ink. However, the words of value are sufficiently out of register with respect to the value tablet, as to suggest that this printing may have been completed in two operations. 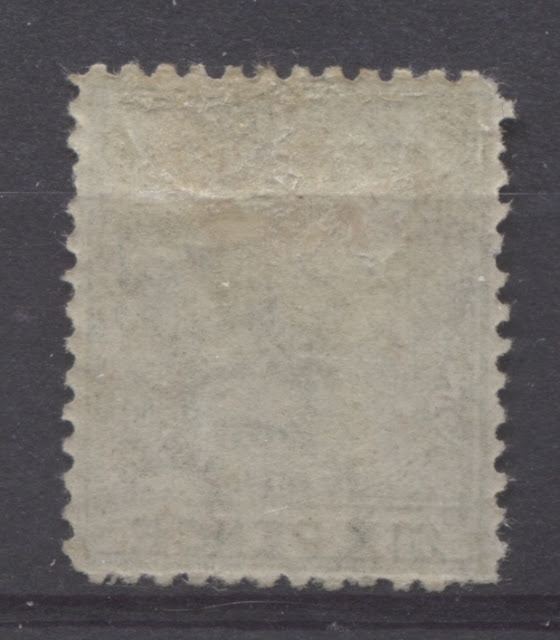 Here is the back of this stamp. Again, the gum is smooth, thin and colourless, as is the case with gum during the crown-CC period. This paper is smooth, with no distinct mesh.
Below is another mint copy of the second printing, this time in a slightly deeper shade of green: 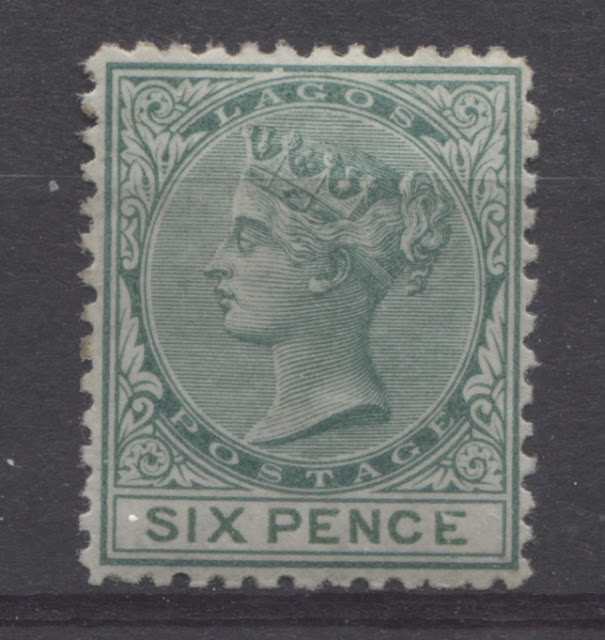 And the back, showing the same paper and gum characteristics: 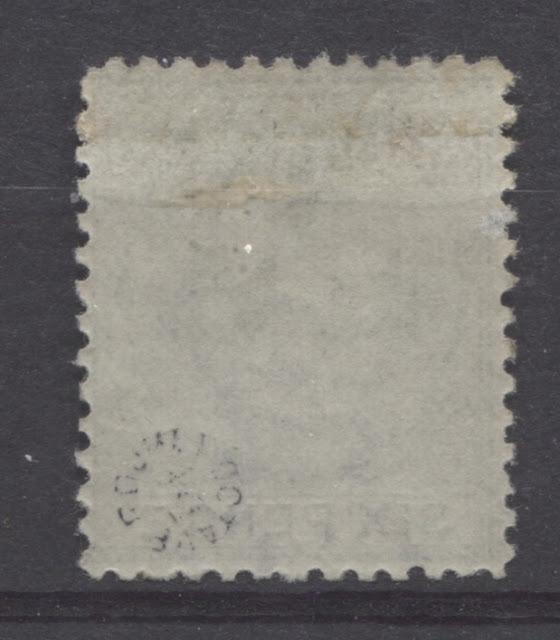 The scan below shows a used example, cancelled with a November 3, 1874 Lagos CDS cancel. 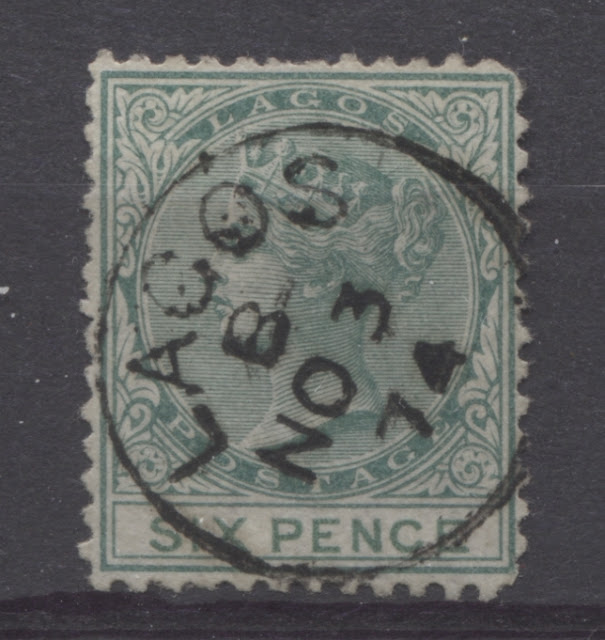 Again, the thing to focus on here is the similarity of the head and duty plate colours.
And the back: 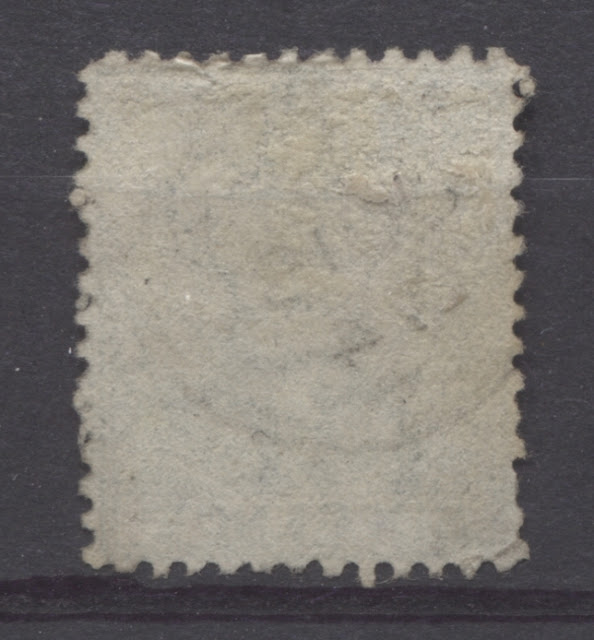 Again, the paper is thick and smooth, with no distinct mesh.
Third Printing - Dispatched September 14, 1874 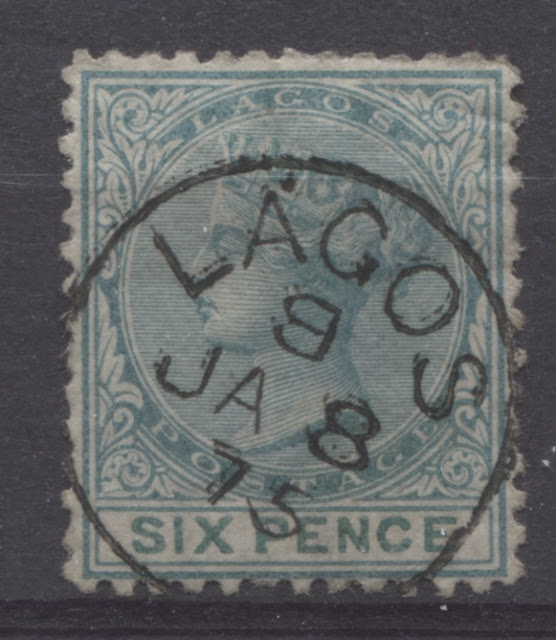 The third printing consisted of 42 sheets of 60 stamps, or 2,520 stamps. The giveaway is the distinct bluish sea-green colour, which is the same for both the head plate and the duty plate. Unfortunately, I do not possess a mint example of this printing to show you here. This used example, cancelled January 8, 1875 is the earliest date that I have. 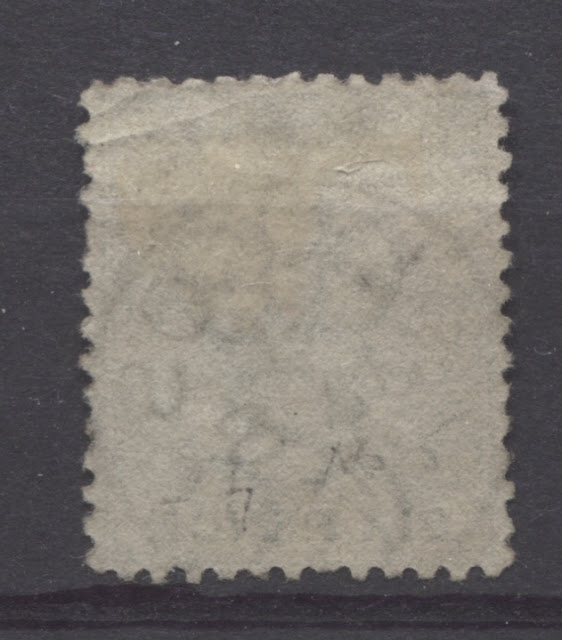 Once again, the paper is smooth, and shows no distinct mesh pattern.
Fourth Printing - Dispatched November 18, 1874 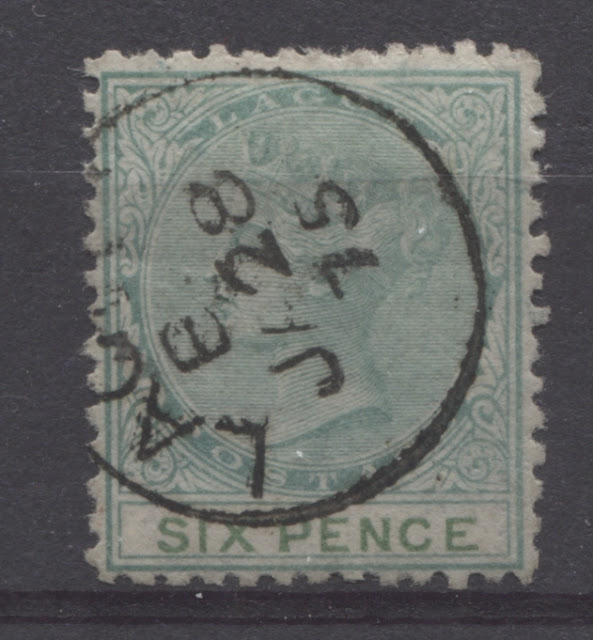 The fourth printing is the third most common, with 54 sheets being printed, or 3,240 stamps. Unfortunately, I do not have any mint examples of this printing to show here. This printing shows the most marked difference between the colour of the head plate, which is a dull sea-green, and the duty plate, which is a deep bright green with a slightly yellow tinge. This example, dated January 28, is cancelled a little over 2 months after the shipment was dispatched. 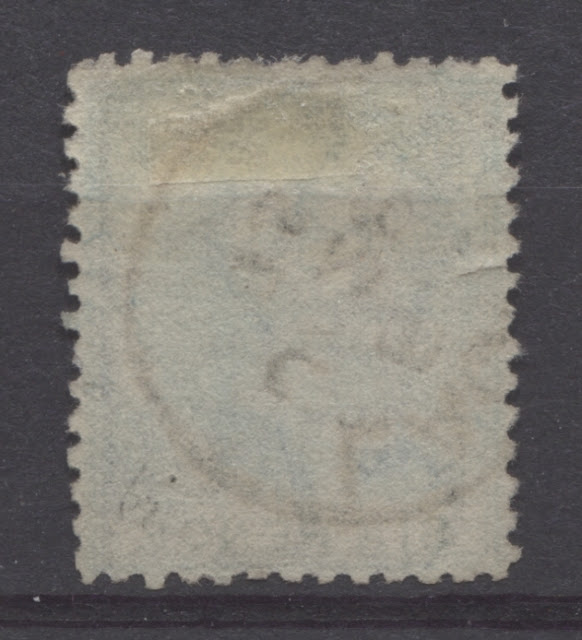 In common with the other printings, the paper continues to be smooth, with no distinct mesh pattern.
Fifth Printing - Dispatched December 14, 1874 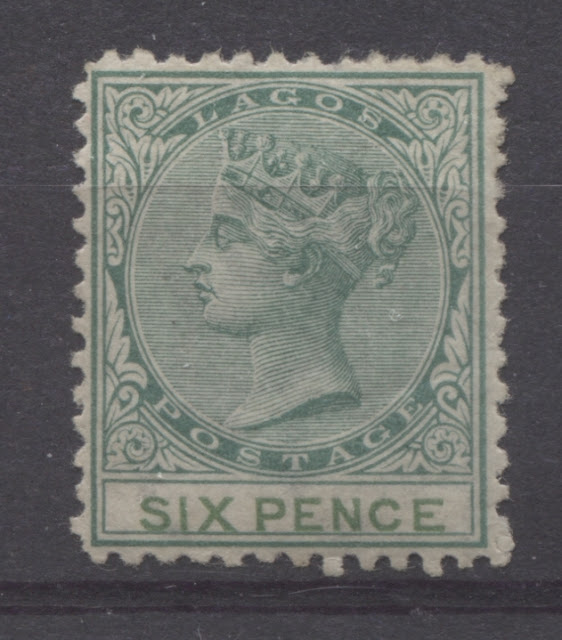 The fifth printing consisted of 54 sheets, or 3,240 stamps. The duty plate continues to be the deep, bright yellow green found on the previous printing, but the head plate colour reverts back to the deep green that we saw on the first and second printings.
Here is the back scan, showing the same paper and gum characteristics as the other printings: 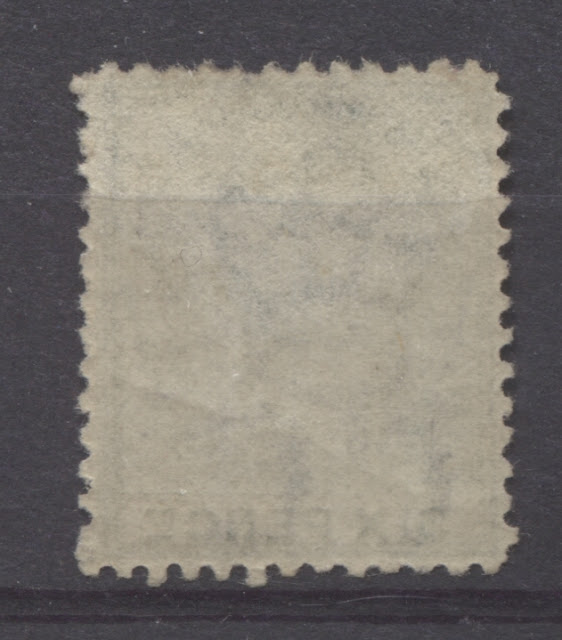 Here is a used example, cancelled with a March 26, 1875 Lagos CDS cancellation: 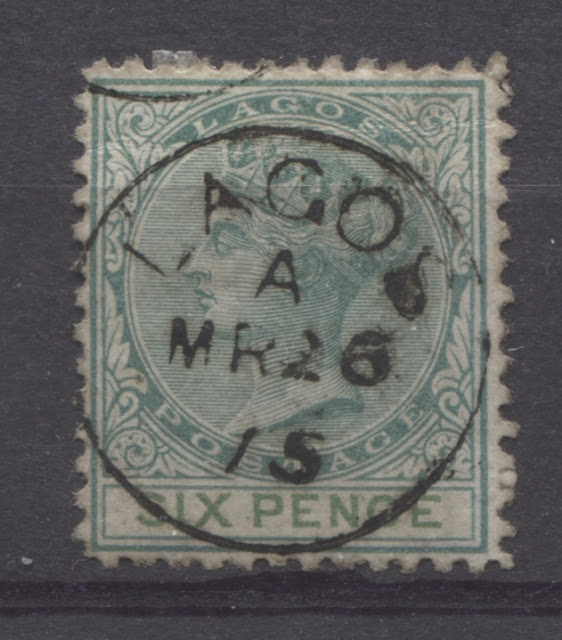 Again, the back scan shows the same, smooth paper, with no distinct ribbing: 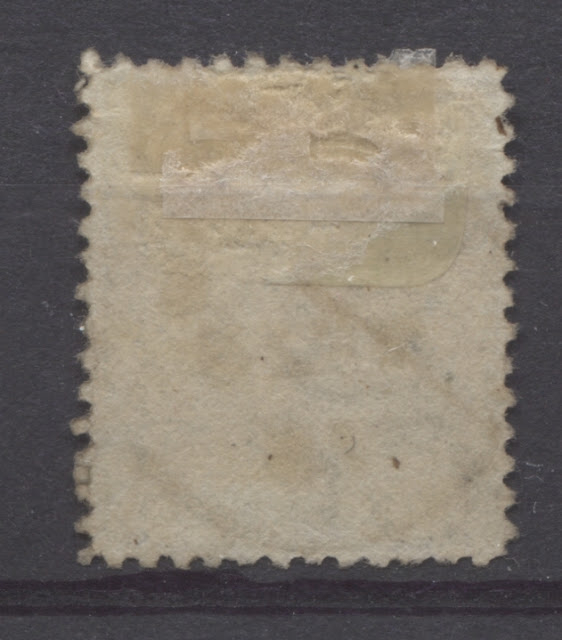 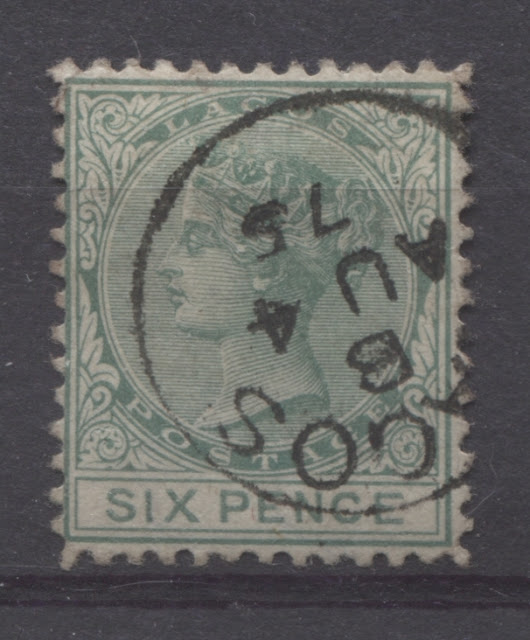 This second last printing, like the fifth printing consisted of 54 sheets, or 3,240 stamps. Like the third printing, it seems to have been printed in one operation, as the head plate and the duty plate are both printed in the same deep dull green, and the words of value are generally very well centered within the value tablets, which suggests that they were laid out prior to printing. 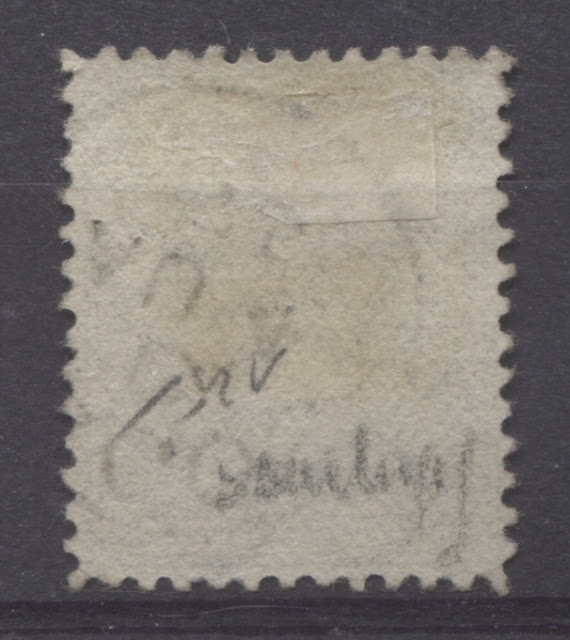 The paper is smooth, but we can just begin to make out the vertical mesh. Here is another example, cancelled on December 13, 1875, that shows more obvious mesh: 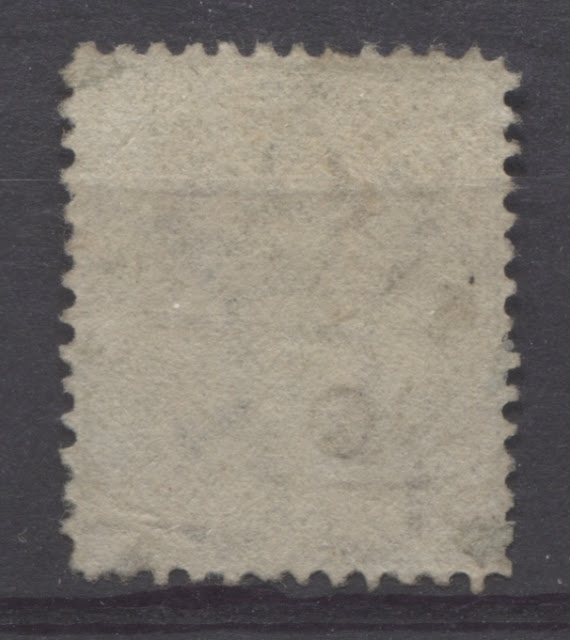 Finally, I show you an example cancelled with the Lagos barred diamond grid cancel, that replaced the Lagos CDS's in February 1876: 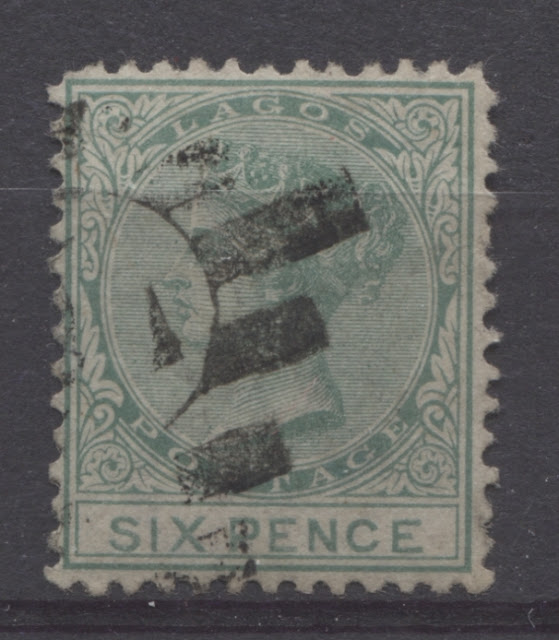 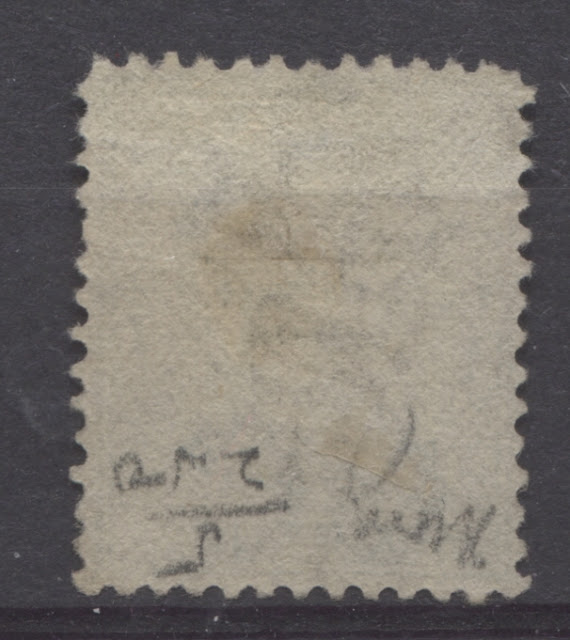 Once again, the paper begins to show evidence of vertical mesh, though it is still very smooth.
Seventh Printing - Dispatched May 13, 1875 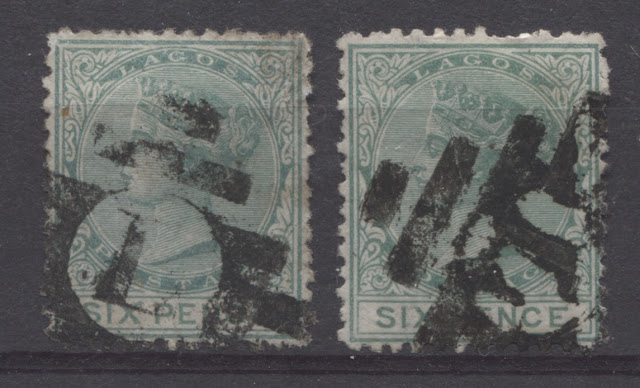 This is easily the most common printing, with 106 of the 377 total sheets printed being from this printing. Despite this, I have only three examples, and all of them are cancelled with the Lagos diamond barred grid cancel. The distinguishing characteristic is again the shade, which is a pale dull green, which lacks any blue, and possesses none of the vibrancy of the earlier deep green. The head plate and duty plate are both the same colour. The back of the stamps show similar paper characteristics to the earlier printings, though the paper does appear to be a bit on the thinner side, with the watermark being more clearly visible than before: 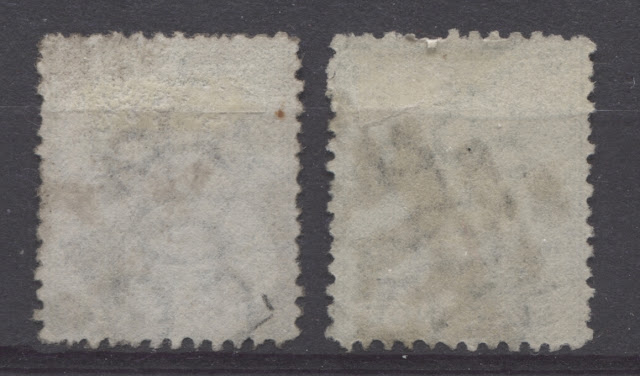 This concludes my discussion of this value. I most likely will update it, and may change the designation of certain printings as I examine more examples and more information comes to light. I would greatly appreciate any information you may have, or scans that would help provide further evidence in regard to the correct classification of the various printings of these stamps. My next post will deal with the last value of this first issue: the 1 shilling orange.