Today's post will deal with the third value in this first issue of Lagos, the 3d red-brown. Four printings were made of this stamp between November 18, 1874 and May 13, 1875.


There appears to be quite a bit of overlap in the usage dates, which suggests quite strongly that the subesquent printings were ordered, and received well before the earlier supplies had been fully exhausted. Indeed, my classification of the printings is my best guess, based on the relative number of different dates in each group. Thus each printing may have stamps dated in July 1875 for example, but if most of the dates in one group are later than most of the dates in another, then it is reasonable to conclude that the stamps of the first group are from a later printing than the group with the mostly earlier dates.
It would appear that both the third and fourth printings were still in use when the diamond L Lagos grid cancellation replaced the CDS in February 1876. However, I have not seen any used examples of either the first or second printing with this cancellation.
First Printing, Dispatched November 18, 1874 - 3,000 Stamps 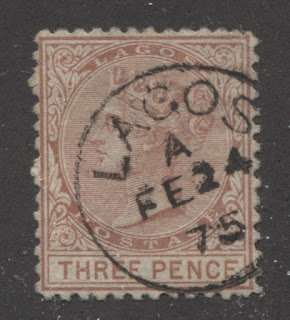 Representing just under 20% of the total printing, this is the scarcest of the stamps to find in mint condition, as the vast majority would have been used for postage. Consequently I do not have a mint example to show you. The used example above is printed in a characteristic pale orange brown. Both the head plate, and the words of value (duty plate) were printed in the exact same colour. In addition, the words of value are always well centered within the value tablet, which tends to support the notion that these stamps were printed in one single pass through the press. The shade is a very milky colour, quite unlike the strong colours found on the later printings. This example is dated February 24, 1875, just over 3 months after it was shipped from London. So it is a reasonably early date, and the earliest I have seen.
The scan below shows the same stamp from the back. As you can see, the paper is quite smooth in appearance, with no distinct ribbing being visible, as we would expect from this early printing. 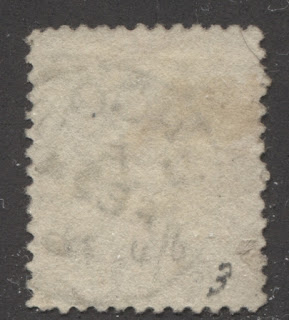 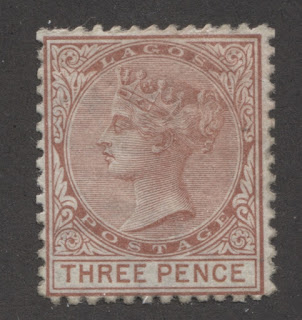 The second printing, as 3,300 stamps is nearly as scarce as the first printing. Fortunately, I do have a mint example, which is shown above. Like the first printing, the colour of the head and duty plates are identical, but this time instead of pale orange brown, the colour is chestnut, which is both deeper and redder than the first printing. The registration of the words of value on this printing are not quite as good as the first printing, which may suggest that this printing was done by passing the sheets twice through the press: once for the head plate, and once for the duty plate. In any event, the same batch of ink was used, so there was no difference between the colour of the words of value and the rest of the stamp.
The scan below shows the back of this stamp, and once again, the paper appears smooth, with no visible ribbing. 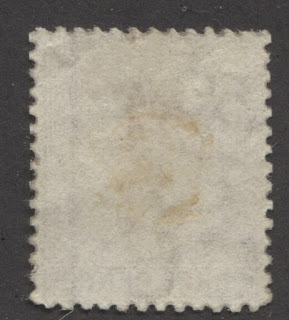 The scans below show the front and back of a used example: 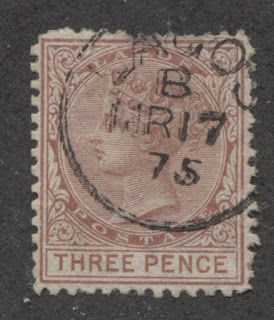 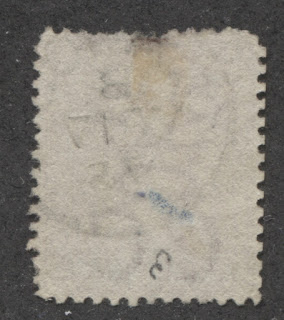 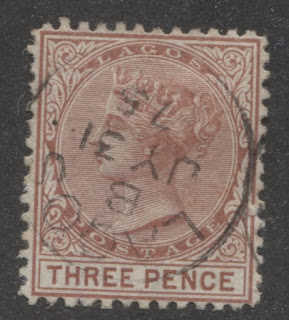 At 3,000 stamps, this printing is as scarce overall as the first two, and again I do not have a mint example. However, I do have a very nice used example as shown above.  It may be difficult to see from the scan, but on this printing, the colour of the duty plate is slightly deeper than the rest of the stamp. So it is printed in chestnut for the head plate, and deep chestnut for the duty plate. The placement of the words within the value tablet is usually off centre, which suggests very strongly that this printing was definitely produced in two operations, with a different batch of ink used each time.
To help you see the difference better, let us look at them again side by side: 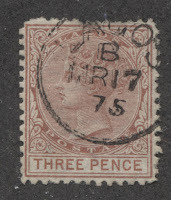 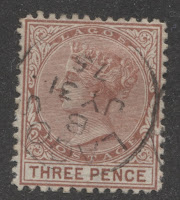 Hopefully you can see the differences in the duty plate colour more clearly now.

The scan below shows the back of this stamp: 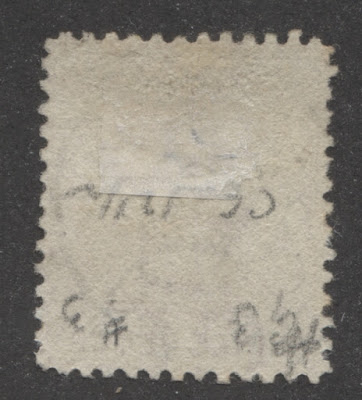 Once again, the paper appears smooth, with no distinct ribbing.
Finally, here is an example that bears the Lagos diamond grid cancellation: 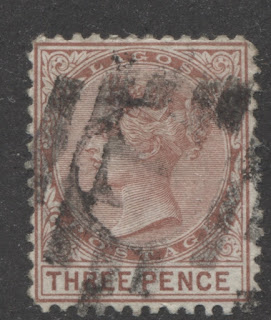 Again, you can see the distinctly deeper colour of the duty plate.
And then, the back of this example: 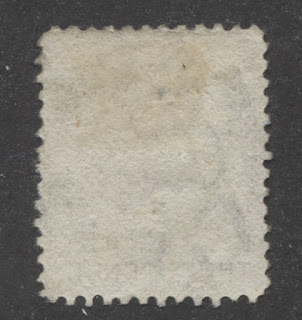 This example shows very clear vertical mesh. So clearly some examples of the third printing can be found both with, and without the mesh.
Fourth Printing, Dispatched May 13, 1875 - 6,480 Stamps 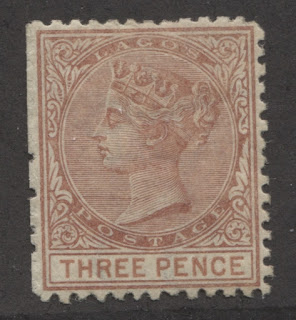 This last printing is the most common of the four, and not surprisingly, nearly all of my mint examples come from it. On this printing, the head and duty plates are printed in different colours, but the duty plate is a lighter colour than the rest of the stamp, instead of a darker one, with the head plate being printed in chestnut, while the duty plate is orange-brown.
The scan below shows the back of this stamp: 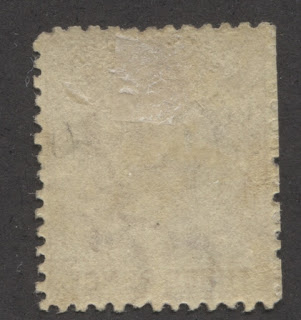 If you look closely, at the scan, you can just make out the vertical mesh.
The scan below shows a used example dated late December 1875: 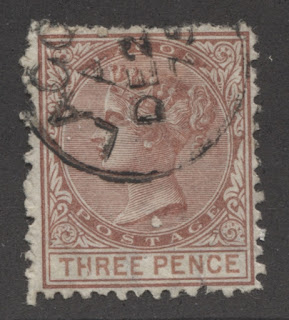 This example also shows the constant plate flaw, the "cracked H" of "Three"
And the back: 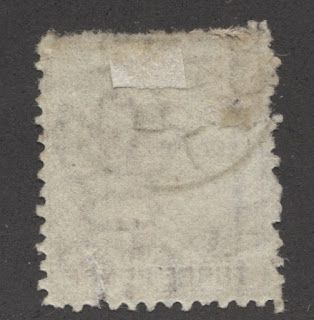 This example is on paper that very closely resembles that of the earlier printings, being smooth, with no visible mesh.
Finally, the example below has the later diamond grid Lagos cancel: 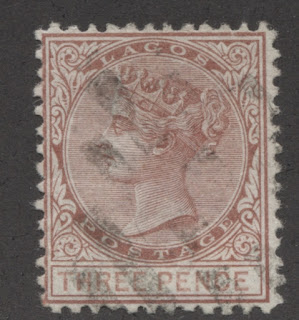 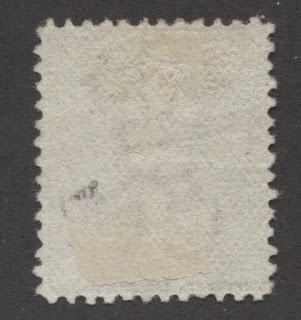 This last stamp clearly shows distinct vertical mesh. Thus it would appear that:
Because both of these last two printings exist with the diamond grid cancel, there is some uncertainty over which one is the third printing, and which is the fourth. However, the following observations support the classification in this post:
This concludes my discussion of the 3d value. My next post will look at the most complicated of the six values in this issue: the 4d carmine, which had no fewer than six printings, and is a very tricky stamp to sort, due to the large number of shades.