Today's post will look at the printings of the third value in the second Queen Victoria series of 1876-1880: the 3d red-brown. This stamp overall, is the second scarcest of the six basic denominations, with only 30,120 stamps being printed over four different printings.The last of these, and the only one to be comb perforated, is also a separately listed stamp in Stanley Gibbons, due to the fact that the colour, which is chestnut, instead of the normal red-brown, is a very distinct and different colour.

This leaves really only three printings, which all came from the first three London dispatches of stamps for this issue, which were:

All three of these are line perforated, so the characteristics that we will be relying on to separate them will be:

First Printing - Dispatched May 9, 1876
This printing is the second scarcest of the four printings made, with 105 sheets of 60 stamps, or 6,300 stamps. The stamps of this printing are identified by two attributes:
The scans below show the front and back of two used examples in my stock. I do not, unfortunately have any mint examples: 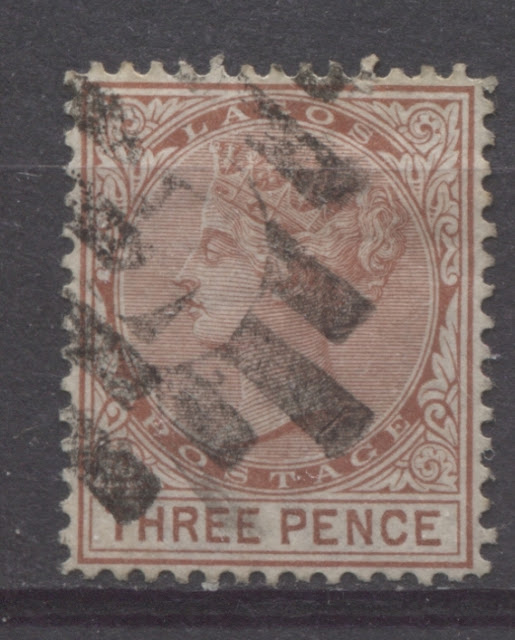 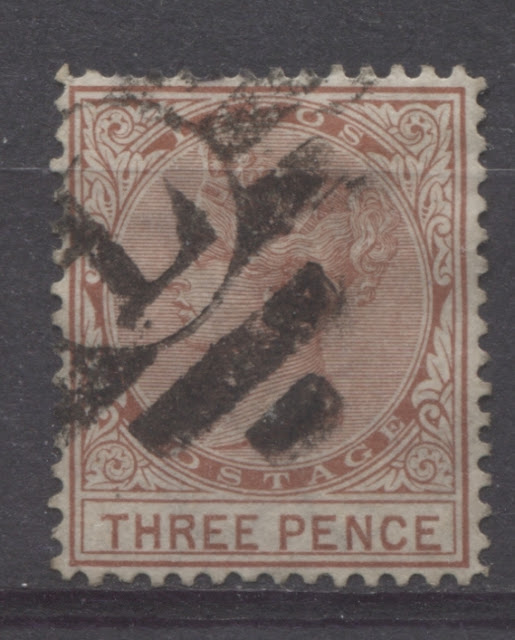 Another example showing the same milkiness to the main red-brown colour. The duty plate ink is a bit less intense here, but it is still darker and more vibrant than the colour of the head plate.
Let us take a look at the backs: 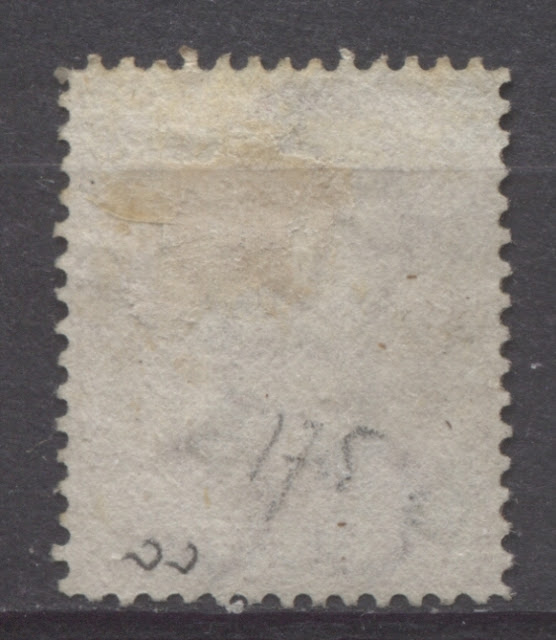 Here we have vertical mesh that is just barely visible, similar to other stamps from the set that were printed at this time. You can just make out some portions of the crown-CC watermark, but it is not completely clear. 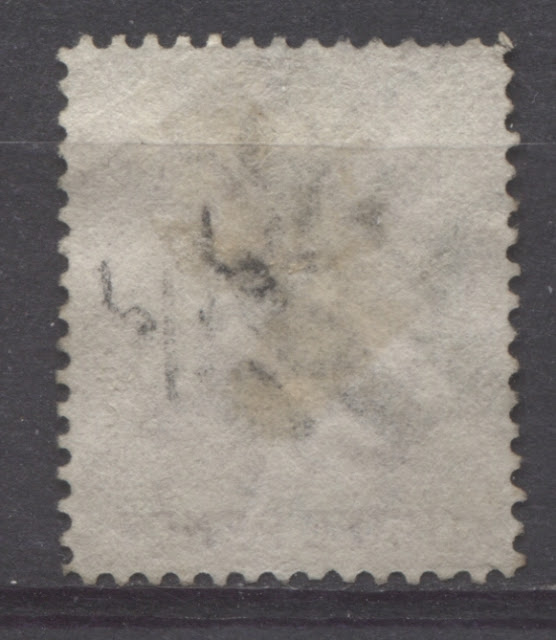 On this stamp, the paper appears smooth, without clear mesh. The watermark is also less visible on this particular example.
Thus there are some minute differences in the paper, even within this first printing. Therefore I feel that the best attributes to rely on in order to identify this printing are the colour, and the cancellation on used examples. Both these examples are cancelled with the Lagos diamond barred grid.
Second Printing - Dispatched June 12, 1877
106 sheets of 60 stamps, or 6,360 stamps were produced in this second printing - just 60 more stamps than the first printing.
In this printing, the colour of the head plate and duty plate are more or less identical, and the colour is a deeper, red brown that is not quite as milky as the first printing. The used examples that I have seen are mostly cancelled with the Lagos diamond barred grid, but I have examples that are also cancelled with the barred oval killer as well.
I have one single mint example in stock, and here is a front and back scan: 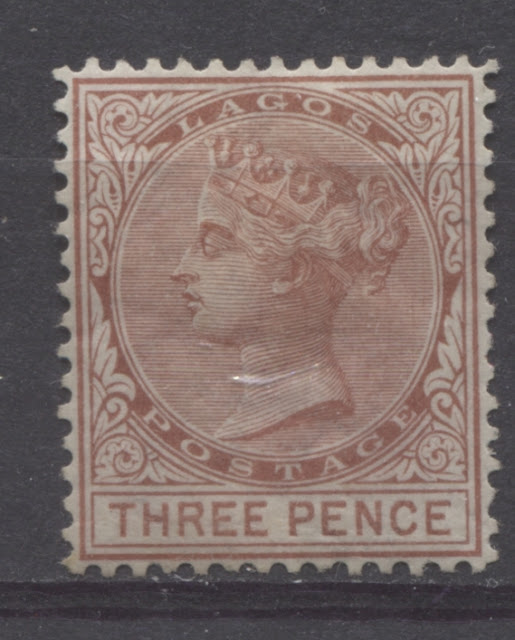 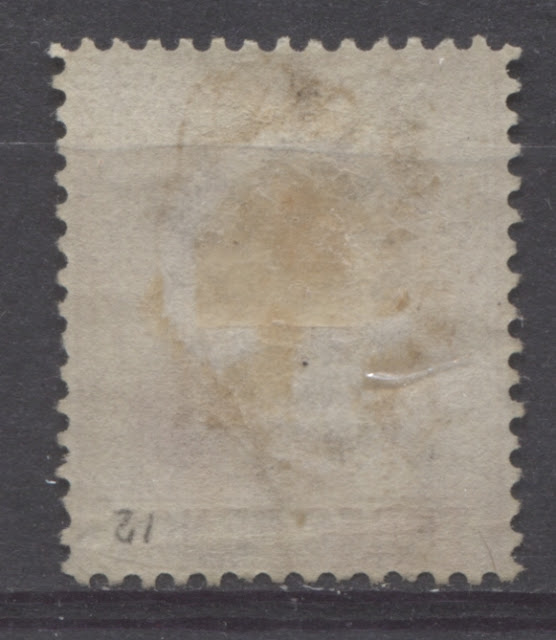 This stamp has the usual colourless, matte gum that is characteristic of this period. The mesh is not visible, nor is the watermark clear.
Lets take a look at two used examples: 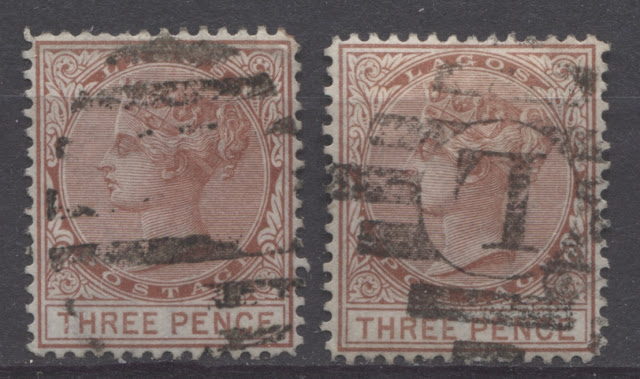 There is some very slight variation in the basic head plate shade, with the stamp on the left, being every so slightly redder than the one on the right. However, what stands out and indicates that these are from the same printing is that the colour of the duty plate is the same as the head plate. Here you can see that both types of cancellation can be found on the stamps of this printing.
Third Printing - Dispatched August 28, 1878
This printing is the most common of the four, with 191 sheets of 60 stamps, or 11,460 stamps being printed.
On this printing, the head plate colour and the duty plate colour are also identical, but they revert back to the light, milky colour of the first printing. I have attributed this to the third printing based on the sheer number of stamps in my stock that match this description compared to the other stamps.
I have two mint examples in stock, and I will show you one of them here: 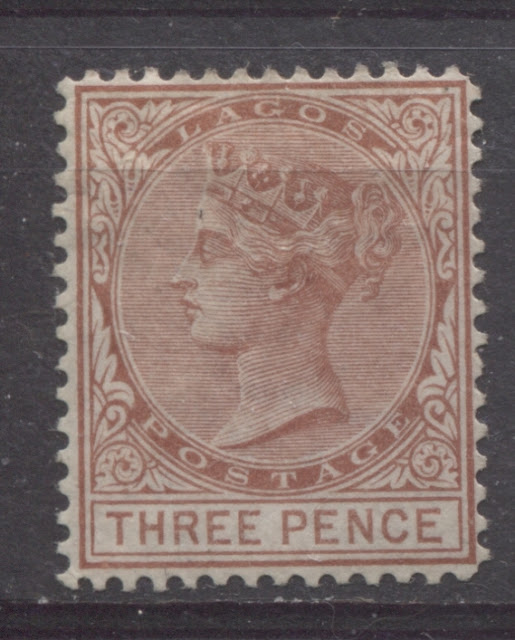 If you compare the colour on this stamp to the others I have shown so far, you will see very clearly that it is lighter and milkier. 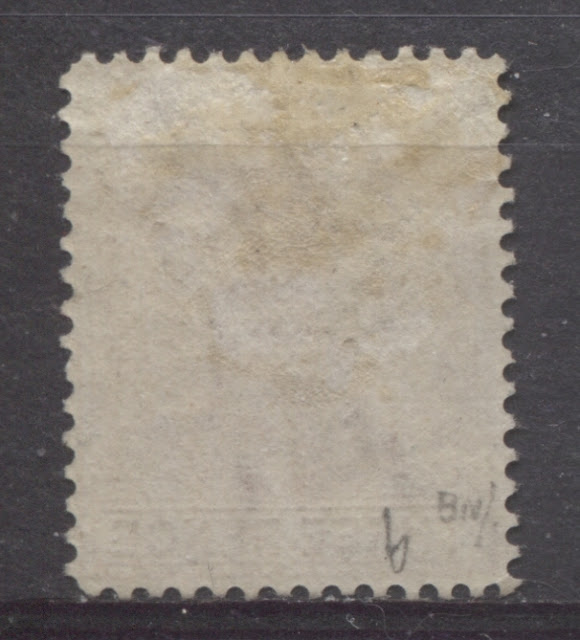 Here is the back of the stamp, showing the usual colourless, matte gum. Once again, neither the vertical paper mesh, nor the watermark are very clear.
Here are some used examples: 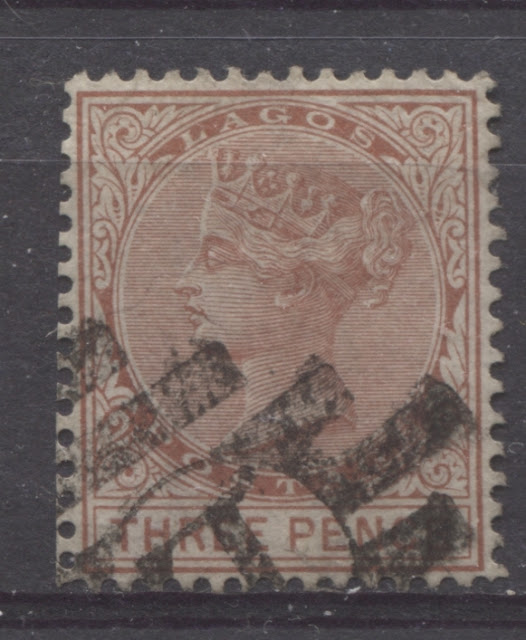 Here is an example cancelled with the Lagos diamond barred grid. 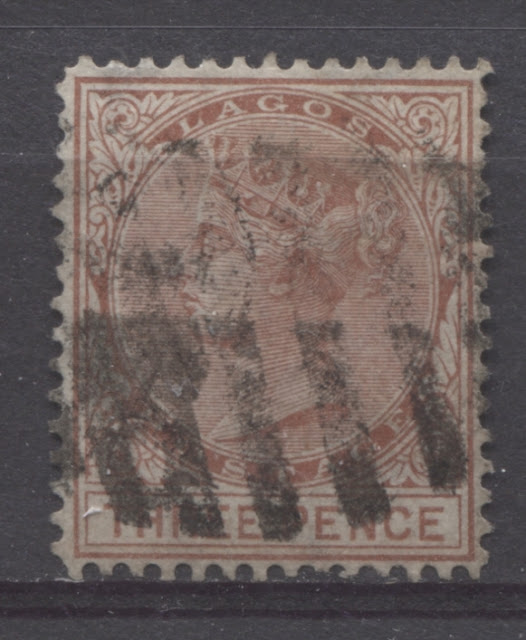 And another example, this time cancelled with the barred oval grid.
Now, let's take a look at the backs of these two stamps: 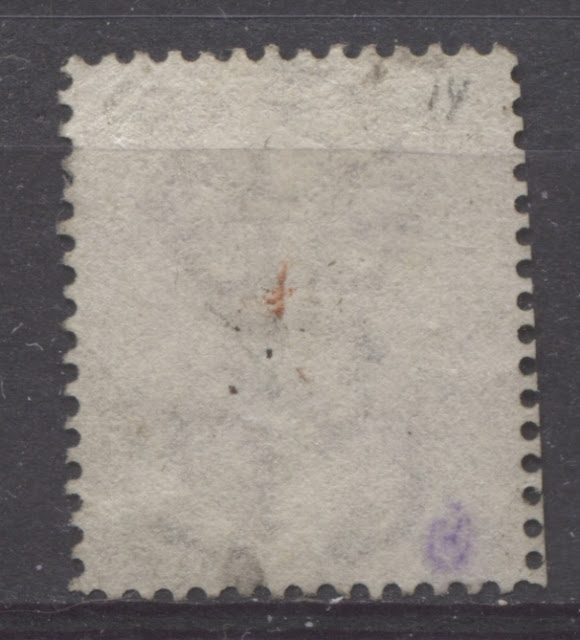 On this stamp, the paper is soft and shows no clear mesh, just like the earlier printings. The watermark is more clearly visible here. 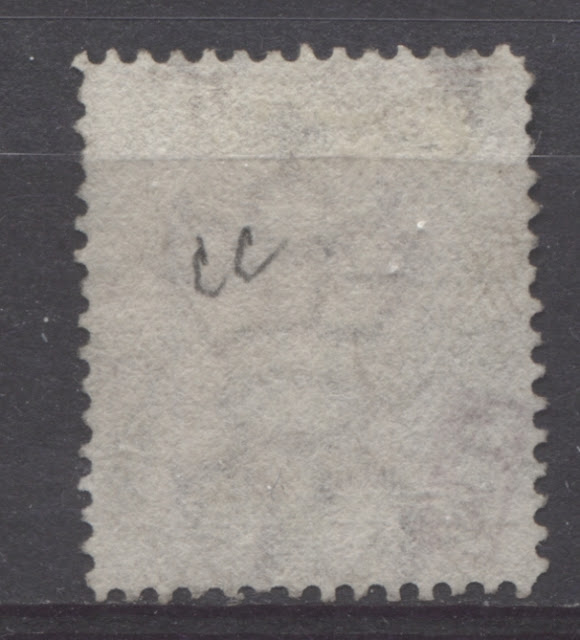 On this example, the vertical mesh is obvious and clearly visible. Also, you should just be able to make out the full watermark, which you generally cannot do on any of the earlier printings, without watermark fluid.
Fourth Printing - Dispatched November 18, 1880
This last printing is the scarcest of the four, with exactly 100 sheets of 60 stamps, or 6,000 stamps being printed.
As I stated at the beginning of this post, all the stamps of this printing are comb perforated and the head plate colour is chestnut instead of red-brown. Chestnut is basically an orangey brown, which lacks the red tone. On the vast majority of the stamps I have seen, both the head plate colour and the duty plate colour are the same chestnut colour. However, I have also seen some examples on which the duty plate colour is red-brown, rather than chestnut, clearly being printed in two operations from different batches of ink. This suggests that although Ince's work only lists four printings of this stamp, there may well have been a fifth printing, made sometime between late 1878 and late 1880, which is very plausible, given that all the other printings were generally made within a year of one another. The gum on mint examples is much thicker, whiter and often appears crackly. Finally, every single used example I have handled is cancelled with the barred oval killer.
Here is a mint example of the printing made using the same chestnut ink for the head plate and the duty plate: 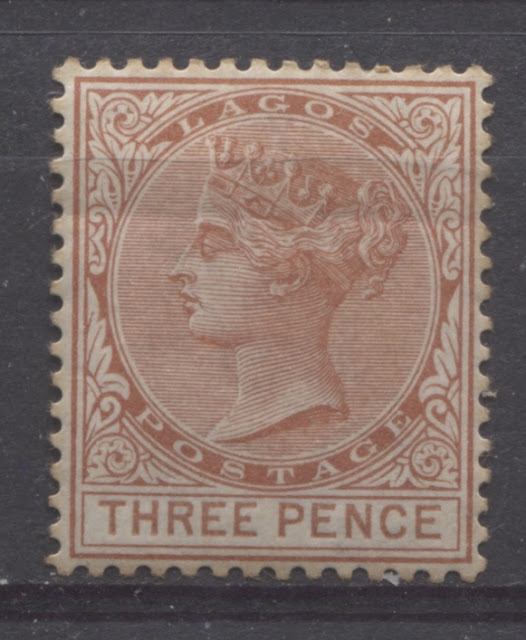 At first glance, this may look similar to the other stamps, but here is a top to bottom comparison: 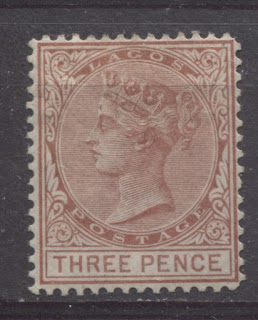 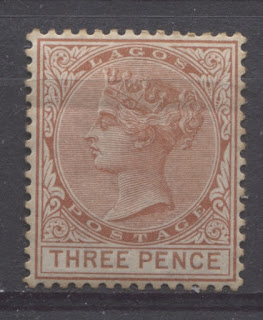 Now, let's take a look at the back of this chestnut stamp: 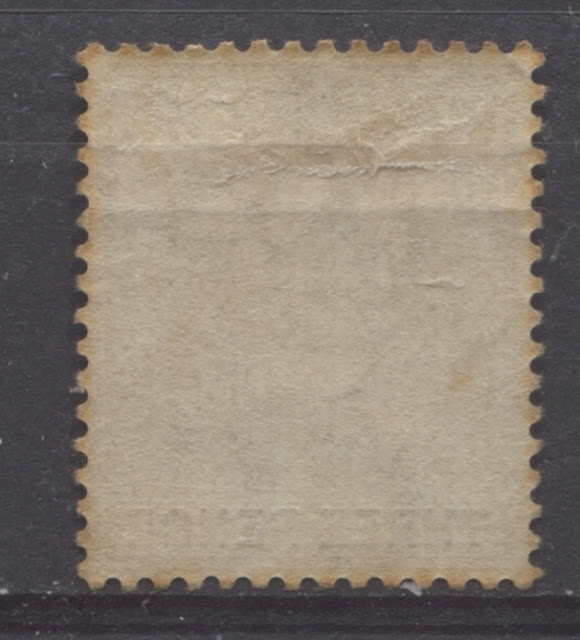 The gum on this example is affected by toning, but you can see that there is no visible mesh and the watermark is almost entirely hidden.
Now here is a used example of the same stamp: 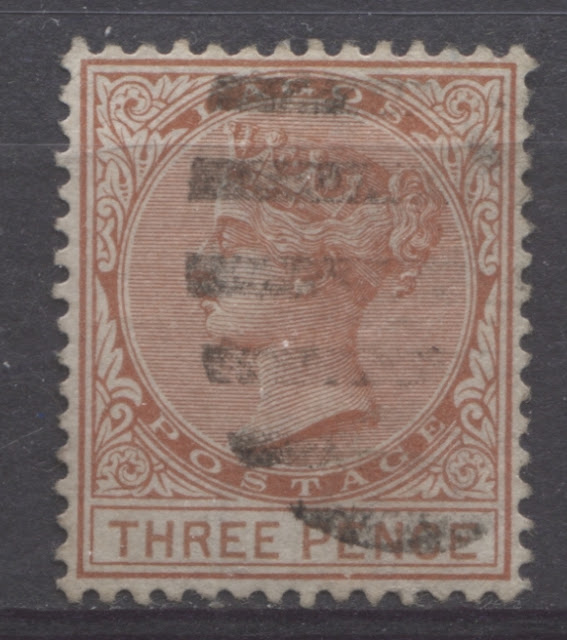 Note the orange tone to the brown, the comb perforation, and the barred oval grid cancel. 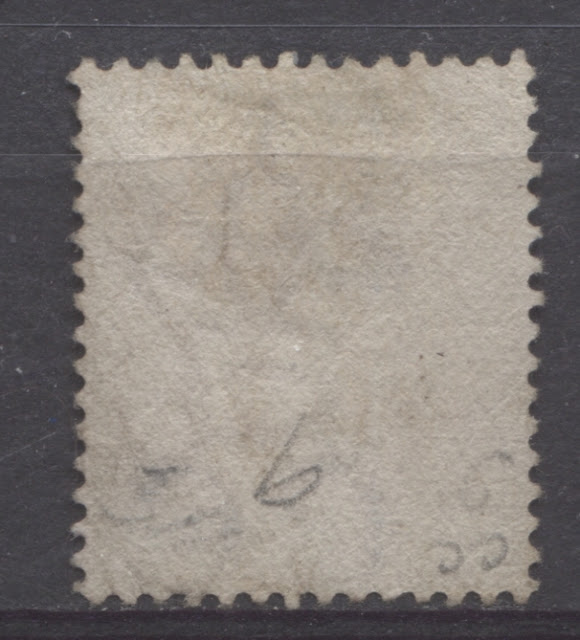 Here the mesh of the paper is just visible, though the watermark is not obvious.
Finally, I have a mint example of a stamp printed from two different batches of ink, and clearly in 2 operations: 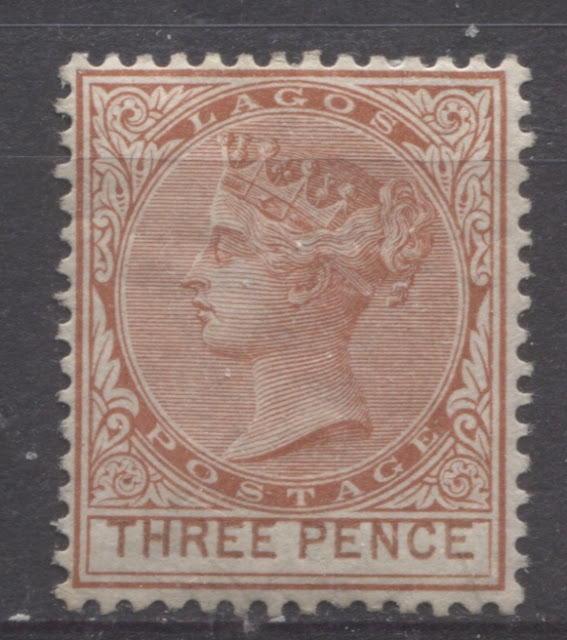 Here you can clearly see the contrast between the orange tone of the brown used for the head plate, and the dark reddish brown of the duty plate. The letters themselves are also badly out of alignment with the value tablet itself, which clearly establishes that the words of value were printed separately from the rest of the stamp, by feeding the sheets through the press a second time. 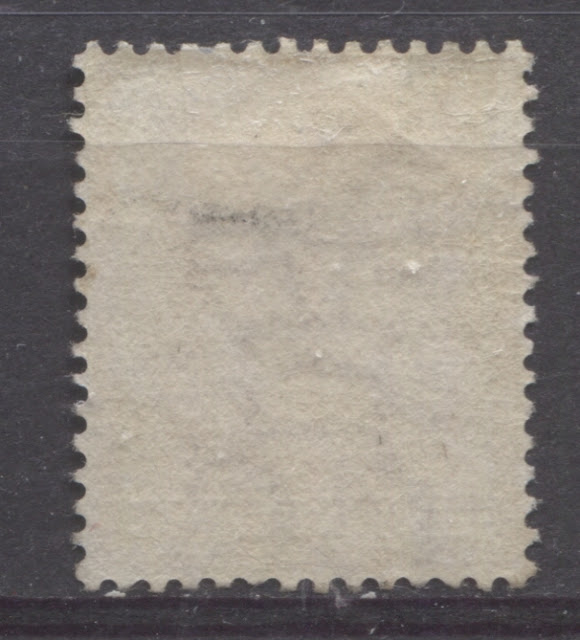 On this example, the gum is not toned, and does not look significantly different from the gum used on the earlier printings. However, it is whiter, thicker and does have a slightly crackly appearance. None of these attributes show up that clearly in a scan unfortunately. The mesh and the watermark are much clearer in this example, which does support the notion that it may come from a printing made after 1878, but before 1880.
This concludes my discussion of this value. Next week we will look at the 4d rose, which is the most complicated of the stamps in this issue. There were six printings just like the 2d blue, but there is a much greater degree of variation in the shades of the 4d rose, as we shall see.