Today's post picks up where I left off two weeks ago and looks at the Third Postage Due issue, which had a very short period of usage, first appearing in May 1933, and being gradually replaced in mid to late 1935. Because of this, Unitrade does not give it much attention at all, listing only the basic Scott numbers, #J11-J14 and one imperforate pair for the 1c. Because the period of use was so short, all the stamps of this issue are much scarcer than most average issues of the period. However, I find that the catalogue prices do not at all reflect the scarcity of the stamps, especially VF mint or choice used examples. Only 500,000 of the 10c value was issued, making this stamp every bit as scarce as the 1929 Parliament dollar or 1930 Mt. Edith Cavell dollar, and yet, its value in Unitrade remains very modest.

This was the last postage due issue to be printed by the British American Bank Note Company (BABN) before the contract reverted to the Canadian Bank Note Company in 1935. Despite the relatively short period of use, there are some interesting gum varieties, as well as some neat shades of colour. Unitrade refers to the basic colour as dark violet, and some stamps are indeed this shade. However, I find that there are more stamps in various shades of bluish, greyish and slate lilac than the pure, deep violet. 10c deep bluish lilac.
Issued December 20, 1933.
Replaced September 16, 1935
500,000 stamps issued.
Points of Interest
There are seven main points of interest to these stamps, which allows for a very manageable, specialized collection:
1. Shades.
2. Paper and gum variations.
3. Re-entries and plate flaws.
4. Plate blocks.
5. Proof material.
6. Imperforates.
7. Cancellations and postal history.
The remainder of this post will take a look at each of these.
Shades

The scans below give some indication of the range of shades that can be found on these stamps. As always, my colour names are based on the Stanley Gibbons Stamp Colour Key. The stamp on the left is deep bluish lilac, whereas the one on the right is deep slate lilac. You can hopefully see that the colour on the right is reddish compared to the one on the left, but duller at the same time. This dullness is a result of the addition of grey to the basic lilac colour. The deep bluish lilac is, by far, the most common shade, based on the stamps I have looked at. As far as I can determine, all four of these shades could potentially exist on all four values. There may even be some redder shades. It would be a fun exercise to study these in more detail to see if there are any more shades other than what I show here.

The paper shows little variation on these stamps, and on all stamps that I have examined, it is vertical wove. However, there is one minor difference that bears mention: on some stamps, the fine vertical mesh is barely visible, when the stamp is viewed face down and the back examined. However, most stamps are on a smooth cream paper, that does not clearly show the mesh. My belief is that the stamps on paper showing mesh are from printings made between 1933 and 1934, while those on the more opaque paper date from 1934 to 1935. This belief is based on my observation that the commemoratives from 1933, being #202, #203 and #204 tend to be on paper showing mesh, while #208, #209 and #210, which are 1934 issues, are almost always on this creamy opaque paper.

The gum however shows much variation, ranging in colour from deep brownish yellow, to a very light cream, while the sheen varies from a glossy sheen, to a semi-gloss, which appears to be the most common, to a satin sheen. The scans below show some of the differences: The cream gum with a semi-gloss sheen, also found on printings made between 1934 and 1935.

Deep cream gum with a semi-gloss sheen, from printings made in late 1933 and early 1934.

Brownish cream gum with a semi-gloss sheen, from printings made in 1933. Brownish cream gum with a glossy sheen, from printings made in 1933. On this, you should just be able to barely make out the fine vertical mesh in the paper.

Brownish cream gum with a satin sheen, from 1933 printings.
Re-entries and Plate Flaws

There are currently no known plate flaws or re-entries on these stamps, and given the fact that the print quantities were lower than most issues of the period, it is possible that there truly are none. However, high printing quantities are not a prerequisite for the appearance of either plate flaws or re-entries. All it really takes is a bit of damage to the plate, or uncharacteristic wear that required re-working of the plate. So it is quite possible that one or more of the stamps in this set may have one or more flaws, or re-entries. You really would have to study many dozens or hundreds of examples and see what turns up. There was only one plate used to print each value, and the inscription appears at the sides as shown on the block above. All four positions being upper left, lower left, upper right and lower right, exist for each value, for a total of 16 basic plate blocks. They are not terribly expensive, being only a small premium over the price for 4 single stamps. You could potentially expand a plate block collection by looking for all positions in each of the four different shades, as well as the different gum types. It is difficult to speculate on how many different blocks could exist, but if all four values exist in all four shades, and if each of these exist with four different gum types, then there could be as many as 256 different blocks (16 blocks x 4 shades x 4 gums).

Another interesting sideline could involve trying to find these blocks, or plate pairs in used condition. I'm sure that they probably do exist, but would not be common, by any means.

Proof Material
The BNA Proofs website lists only one item for each value in the set, with three known of each. They are valued at between $1,000 and $2,000 each, though you may find yourself having to pay more, or less than these amounts, as you will only likely ever find these for sale at auction. There were no scans of these proofs anywhere on the internet, but the relevant items listed on the website are: 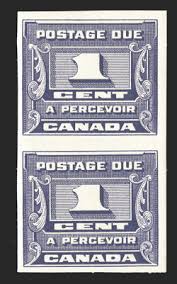 The only listed imperforate variety on this issue occurs on the 1c. However, it would stand to reason that the other values should exist as well, but none have, as yet, been reported. It is rare, with only 100 pairs known, and also exists in plate block form. At just $500 in Unitrade for  VF pair, it is a very good buy, with a lot of future potential - in my humble opinion anyway.

While I have come across both postcards and covers bearing each of the first two postage due issues, I have not personally seen this issue on cover. Unitrade values single usages of the 1c, 2c and 4c at a modest $25-$30 each, which suggests that while scarce, they are not rare. The 1c value would have been used either for the redirection of a local first class letter to a non local address  or undeliverable third class printed matter returned to sender. The 2c value would only have been used on mail where the postal deficiency was 1c, so:

The 4c value would be used on any mail that was shortpaid by 2c. So that would generally be:
The 10c value had no specific single use, as it would generally correspond to a deficiency of 5c, which is not an amount that we would generally see, though it could be found on a special delivery or registered item that had only part of the fee paid, like 15c instead of the required 20c for special delivery, or 5c instead of 10c for registered. However, it is far more likely to be found used in larger multiples on these types of covers where no fee was paid at all, or incoming airmail covers from exotic locales where the airmail rates were high, such as from Africa, or South America, and the wrong amounts were paid. One thing I should point out here is that in the 1930's airmail was still very much a luxury, and most mail was still carried by ship. It was not until the 1950's that airmail becomes the norm, and surface, the exception.
I notice that CDS cancels become a bit more prevalent on this issue in comparison to the first two issues, though a very large proportion of the used stamps continue to either be uncancelled, or to be cancelled with pen or crayon. Still, it should be possible with patience to form a very nice collection of cancels without breaking the bank, as the 2c lists for only $1.75 in VF, while the other values generally list for between $5-$11 depending on whether they are F or VF.