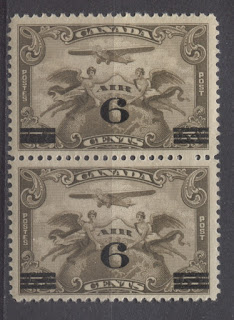 6c on 5c olive-brown
2,000,000 issued.
Before I move on to the 1930-1935 Arch Issue, there is one small provisional issue that I should deal with briefly, which is the 6c on 5c surcharge that was applied to stocks of the 5c Scroll Issue airmail stamp in early 1932.
The issue was necessitated by an increase in airmail rates that was brought about by the re-introduction of the 1c War Tax on local mail in 1931. There were no new 6c stamp designs prepared for this increase until the Dated Die Issue appeared in 1935. Instead the decision was made to use up unsold stocks of first the Scroll Issue airmail stamp, and then when these were exhausted, the 5c Arch Issue airmail. This later design was surcharged in blue and released as part of the Ottawa Imperial Economic Conference commemorative issue, which was released on June 12, 1932. Consequently, it is difficult to know where to place this issue, since it has the Scroll design, but was issued during the period associated with the Arch Issue. As we shall see, despite being only a single stamp, there is still quite a bit that can be done with this stamp.
Points of Interest
There are several ways that a specialist could build a collection with this stamp:
1. Shade varieties
2. Paper and gum varieties.
3. Overprint varieties.
4. Plate blocks
5. Postal history, first flights, first day covers and cancellations.
6. "Swollen Breast" plate flaw.
7. Proof material.
I will now touch briefly on each of these.
Shade Varieties
As this issue was produced from stocks of the existing Scroll airmail issue, it would stand to reason that the range of shades that can be found on the unoverprinted stamp should exist on this issue as well. Unitrade has never listed any shades on the basic issue, although they do mention the existence of a golden olive (olive sepia on the Gibbons colour key). It is not clear from their footnotes, whether this shade has been seen on the surcharged stamp as well, though I assume that it must exist.
The other basic shades that I have seen on the unoverprinted stamp: olive-brown, deep olive-brown and light olive-brown should all exist on the surcharged stamp as well, though  so far I have only seen the deep olive-brown and regular olive-brown shades.
Paper and Gum Varieties
The gum on this stamp is generally always a very shiny and streaky cream gum with a high sheen. I have not come across the more subdued, satin-like sheen on this stamp that one often sees on the 1927-1929 issues printed by the Canadian Bank Note Company. I have no idea why this is, but it might make an interesting research topic for someone with access to the postal archives and wishing to delve into it.
As far as paper goes, I have found that this stamp can be found on two types of paper:
I do not know whether all of the above mentioned shades can be found on both paper types. Potentially, there are eight different paper and shade combinations and trying to locate them all could be an interesting challenge.


Overprint Varieties
Unitrade lists three major overprint varieties, all of which are expensive, costing several hundred dollars each and being generally unobtainable in anything better than fine condition:
All three of these varieties have been heavily counterfeited. The genuine overprints are made using a jet black ink that has a bit of a shine to it. Blue-black or matte black examples are very likely to be counterfeits, as are examples that are just too well centered to be true, since most of these were badly off centre.
However, in addition to these well known varieties, I have found two other constant varieties that although much less spectacular, are very much worth collecting:
In terms of scarcity, I have not had the opportunity to study a whole sheet to see which positions show these varieties, and this would make another interesting research project. However, my preliminary examination of several dozen mint copies, suggets that 5-10% have one of these  two varieties. So while not as rare as the double, triple or inverted overprints, they are not common.
Plate Blocks
There are three collectible positions from which plate blocks of this stamp can be collected:
I would imagine that the above 8 potential shade and paper combinations, will exist on at least one of the plates for each variety and maybe even on both. So potentially, it may be possible to form a collection of as many as 24 possible plate blocks.


Postal History, First Flight Covers, First Day Covers and Cancellations
Unitrade does list first day covers for this stamp and they are not that expensive at $20 for the most common cachet. That being said, I am sure that there are probably quite a few different cachets that can be collected for these. The most common usage that I have seen is on various first flight covers. While most of the flights are not rare and worth more than $3-$5 each, there are some less common flights that may have utilized this stamp. There are specialized airmail catalogues that list all the different flights and scarcity ratings for each one. Less common are examples used on commercial mail to pay the 6c domestic airmail rate, but given that this stamp was in use until 1935, it should not be too difficult to find on cover.
Another nice way to collect this stamp is to go after the various CDS cancels on used examples. As there were only 2 million stamps surcharged, it is not nearly as common in well centered used condition as you might expect, given its very low catalogue value. A collection of CDS examples from small post offices around the country will take many years to assemble and can be done without breaking the bank, though you will probably find that you have to purchase individual stamps on a retail basis from various dealers.
The "Swollen Breast" Variety
As with the unoverprinted issue, this stamp is found with the swollen breast variety, which to recap is a large dot of colour on the breast of the left winged figure. As stated in my last post, it comes from position 4 of the upper right pane of plate 2. So it is possible to find this variety in plate blocks. Oddly enough, in all my 38 years of handling Canadian stamps, I have never seen this variety in the flesh.
Proof Material According to the BNA Proofs website, there are four different essays known of the surcharge on this stamp. All were made from the issued stamps affixed to a card and cancelled as show above. All are unique and are surprisingly inexpensive given this fact, ranging from $350 to $1,000 each when they have sold at auction.
Conclusion
While this stamp probably does not provide enough scope to keep you occupied for a lifetime, it does provide a very fruitful sideline that you can pursue if you are specializing in either the Scroll Issue or the Arch Issue and have reached the point where the more elusive items from those issues are getting harder and harder to acquire.