Today's post will begin a journey into what are some of my favourite Canadian issues. Beginning in 1928, and going to 1946, Canada issued no fewer than seven long definitive sets. The general format was the same for each one: a series of low values featuring a portrait of the king and then a series of high values with some pictorial designs of Canadian landmarks, or in the case of the 1942-46 War Issue, depictions of Canada's participation in the war effort. Generally, it would appear that the Post Office Department tried to represent all regions of the country on the stamps, although occasionally one region would be missed on an issue. This format continued into the present reign and has come to define the way in which Canadian definitive stamps are issued. Up until the War Issue, the sets were generally discrete, in that one set would be entirely replaced by another. The only exception was the 1932-35 Medallion Issue where the set continued to use the high value stamps of the previous Arch Issue. Starting with the War Issue, this became a regular practice, this staggered replacement of low and high values. This tends to make classification difficult in trying to decide where one set ends and another begins. However, it creates fantastic opportunities for the keen postal historian who seeks out mixed frankings with the right dates.

The 1928-30 Scroll Issue was an extremely short lived set that was almost entirely replaced by the end of 1930 by the Arch Issue. The reason had to do with the Canadian Bank Note company losing the printing contract to the British American Bank Note Company. It certainly wasn't due to the designs, with the 50c Bluenose being an internationally acclaimed, iconic stamp. Most collectors only collect it in a very simplified fashion, obtaining one of each value and colour. However, there are some subtle nuances to the set, that make it very ideal for someone interested in forming a specialized collection that is more manageable and affordable than the earlier issues. Due to its short period of use, collecting the postal history from the right period from late 1928 to late 1930 will prove to be a real challenge.

The stamps were all designed by Herman Herbert, who would continue to figure prominently in Canadian stamp design well into the 1950's. Three talented engravers were responsible for executing the designs:

The low values were printed in sheets of 400, which were guillotined into 4 panes of 100, while the high values were printed in sheets of 200, guillotined into 4 panes of 50. The booklet panes were printed in sheets of 18 panes, separated into 3 groups of 6 panes arranged tete-beche and separated by blank vertical gutters. It is possible to collect tete-beche pairs and wide gutter pairs of these and although they are not inexpensive, they are much more affordable than similar varieties on earlier issues.
Condition is definitely a problem on this issue, which generally had very poor centering. There are a lot of fine and VF centered stamps on the market, but they are a very small fraction of the total issue. Some values like the 1c and 2c, despite being printed in colossal quantities are surprisingly hard to find perfectly centered.  In reality a very large number of the stamps printed were fine or just very good in terms of centering. Also a lot of the straight edged high values have been reperforated to improve their appeal, which makes collecting genuine, nicely centered straight edged stamps difficult. Finally a lot of collectors these days expect to find very fine never hinged examples of these, but these are difficult to find and it is my belief that a hinged stamp should be every bit as desirable as a never hinged one.

The Stamp Designs and Issue Quantities 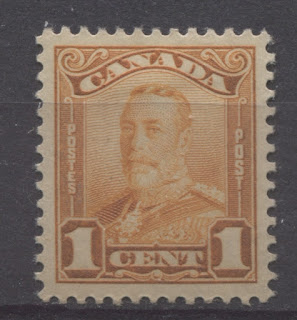 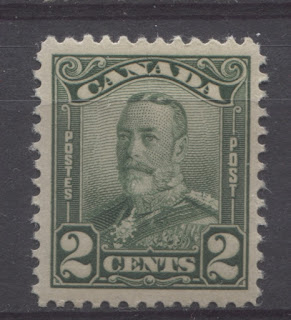 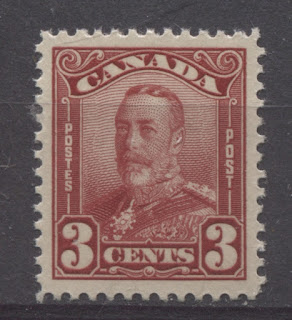 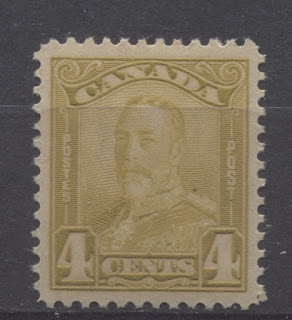 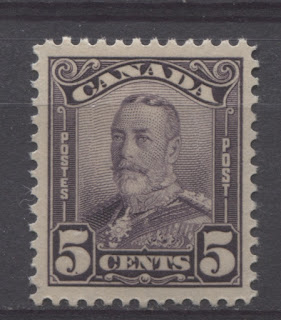 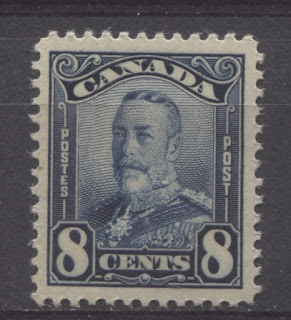 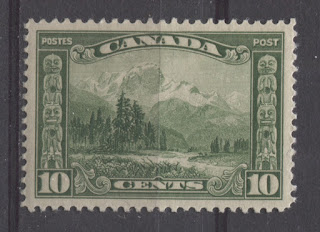 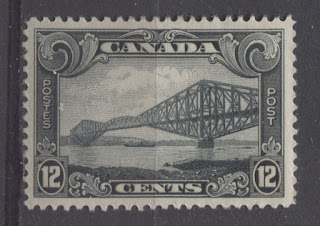 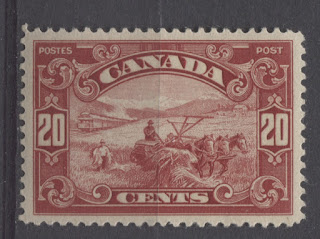 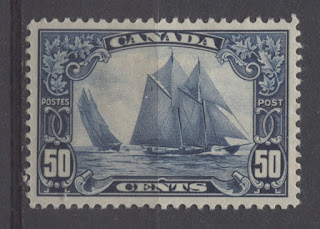 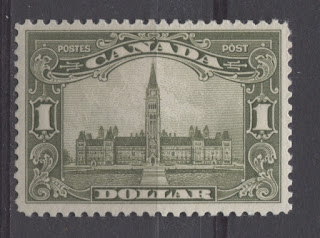 5c Olive Brown - Allegory of Flight
Issued September 21, 1928
5,050,000 stamps
Replaced December 4, 1930
It is surprising to note that the airmail stamp was issued first. They are really beautiful stamps though, aren't they? There is a balance, symmetry and ornateness of design that you just don't see again until the 1935 Dated Die Issue, when the Canadian Bank Note Company regained the printing contract.
Points of Interest
There are several directions that a specialized collection of this issue can take:
I will now touch briefly on each of these.
Shade Varieties
The only listed shade variety in Unitrade on this issue is the bronze green shade of the $1. However there is at least one more shade of this value, and most, if not all the other values can be found in at least two shades. In my examination of these stamps over the years, I have become aware of at least the following shades:
That is quite the range. Admittedly, some of these are so subtle that on single stamps you would have to compare two stamps very, very closely to see the differences. However, if you collect larger multiples like blocks, the differences will be much more obvious. The names above are taken from the Stanley Gibbons Stamp Colour Key and modifying the names when they don't quite match the swatch.
Paper and Gum Varieties
Like the previous two commemorative issues and the late dry printings of the Admirals, the stamps of this issue can generally be found on:
All the 50c stamps that I have seen are on horizontal wove paper and is the only value I have seen thus. An interesting challenge would be to try to find the other values on horizontally wove paper, and the 50c on vertical wove paper.
Plate Blocks
This is the issue where plate block collecting really hits its stride, for even through the issue was very short lived, a decent, but not ridiculous number of plates was used to print the stamps. Generally speaking, the stamps are collected either in blocks of 8 for the low values, or 6 for the high values. The known plates for each value are:
Generally speaking, the plate blocks are worth significantly more than there mere price of 6 or 8 stamps. Most plates are valued at more or less the same price, but some like A4-A6 of the 1c are worth surprisingly more. Nearly all blocks are centre positions, though the 8c can be found in an upper right position on plate A1, while the 50c is found only in upper left or upper right positions. This last value is the only one in which an upper left or upper right plate A2 block is considered to be a full plate block when it has 4 stamps instead of the normal 6.
Plate Flaws
Similar to the last two issues, that were also printed from nickel-chromium plated printing plates, there are only two listed constant plate flaws known on this issue, though I am fairly sure that if you look hard enough you can find at least a few others. The two listed flaws that are in considerable demand are:
Imperforate and Part Perforate Varieties
Like the two previous issues, every stamp of this issue can be collected as:
Generally, only 250 pairs are known to exist of each pair, so at between $150-$1,000 per pair, they are quite a bargain for how scarce they are. If you collect them all, you have 39 possible pairs to collect, and they make a very nice display indeed.
This concludes the first part of my discussion of this issue. My next post will deal with the proof material, cancellations, booklets and postal history.