Yesterday's post concluded the issued stamps of the 1953-1963 Karsh Issue. In today's post, I wanted to address an equally fascinating but highly challenging aspect of this issue: the proof and essay material. This is the pre-production phase of the issue if you will. It's considerable challenge lies in the fact that most of the pieces illustrated here are either unique or very rare, with less than 3 or 4 known in each case. Consequently, most of these will sell for upwards of $1,000 each when they do come up for sale at auction, which is not very often at all. 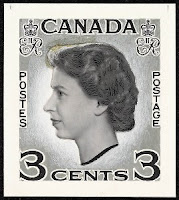 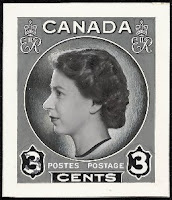 These two essays are the only ones known in black and white. The one on the left borrows heavily from the earlier King George VI Postes Postage: the lettering is similar. Both designs incorporate the Royal Cypher, as the issued stamps did. The portrait is a photographic profile of the Queen, similar to the Wilding portrait used on the issue that replaced this one. The above essay is the only one known in colour. It incorporates much the same style of lettering as used in the issued stamps, but uses a different profile portrait and omits the Royal Cypher. It is die sunk on card and three examples are known in private hands.

Essays of the Approved Designs 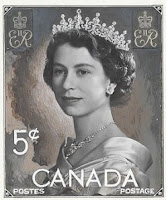 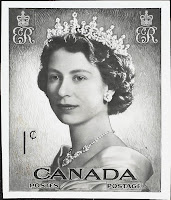 Both known essays of the unapproved designs are black and white. The one on the left is very similar to the issued design, except that the font used for thee lettering is different and the background shading is completely different.

On the 20c, there exists three unique die essays: There are a large number of different essays of the $1 totem pole. Most differ from the issued design in some small detail. Printed in red-brown, are:
Then, printed  in sepia we have:
Finally, in black are the following 11 unique items for this value:


Progressive Proofs of the Issued Design 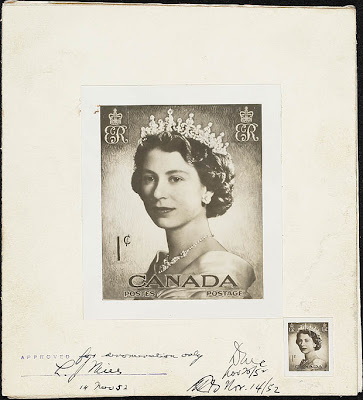 Photographic die proof of the 1c value.
I do not know if the above photographic proof exists for the other values or not, as I could not find any references to it on the BNA Proofs website. However, I would assume that they must exist somewhere. The above is a progressive proof of the approved design. The value and the date are missing. There are a total of six known in black brown on various papers (India, Glazed and Manila), four in carmine rose (2 on India and 2 on card), two in violet and two in steel blue. Two small progressive proof in black exist for the 20c, that show the design almost complete, except for the background.

On the 50c value there are currently four progressive proof known, none of which are printed in the issued colour:


Three each of the above progressive proofs are currently known. The above is a small die proof on glazed card in the issued colour, violet brown. A similar large hardened die proof also exists. In addition to these, the same proofs each exist in black, and a large progressive proof on India paper exists that is printed in blue-green and has the background shading near "1c" unfinished. There are considerably fewer proofs known of the three cent as compared to the 1c and 2c values. For this value there exist three each of a hardened and unhardened die proof on glazed card, printed in the issued colour of carmine-rose. For this value, three examples of  large composite proof of this and the 5c value on card are known printed in blue. Printed in violet are three each of the following: For the 5c value there exists three each of the following:

Photographic proofs also exist of all values from the 1c to 5c in grey. They are unique, as far as is currently known.

There are currently no known die proofs, or trial colour proofs known of the 7c Canada Goose. For the 50c value there exists a unique photographic proof in black with the printer's notes in the margin as well as three large trial colour proofs on card, printed in carmine-rose. Of the proofs printed in the issued colour, there are three each known of the following:

There are currently no known die proofs or trial colour proofs of the $1 totem pole.
Plate Proofs of the Issued Designs 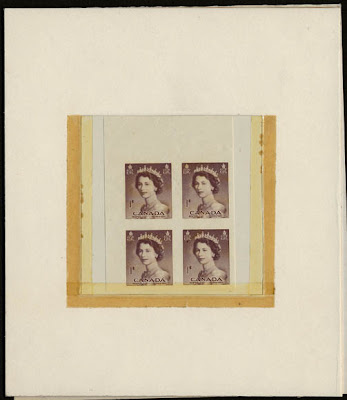 The above block of the 1c violet brown is the only plate proof block that I have seen in this series. I assume that the other values must exist. Readers, if you either have, or know of the existence of other blocks, or singles for the other values, please do comment, so that I can update this post to include them.

That concludes my roundup of the proof material that is currently known from this issue. If you know of or have in your possession any other proof material not listed above, I would very much appreciate a comment to that effect with the details, so that I can update this post.