The topic of gum on the Centennial issue is one that has not received very much attention at all since collectors became aware of the basic difference between dextrine and PVA gums. However, like any chemical compound, the composition of the gum on this issue showed considerable variation as the post office experimented with different formulas as they transitioned away from dextrose gum towards synthetic PVA gum. Indeed the special hybrid gum, termed "spotty white gum" by collectors, that first appeared on a limited basis in 1971 was almost a cross between dextrose and PVA in the sense, that it had most of the properties of PVA gum, but it possessed much of the shine and thickness associated with dextrose gum. In addition to variations within the three major categories of gum, there was also a significant difference in the properties of the gum used by the British American Bank Note Company (BABN) on the stamps that it printed, and the gum used by the Canadian Bank Note Company (CBN).

This post will look at the the variations that can be found in each of the three major categories of gum: dextrose (dextrine), PVA and spotty white gum. I will attempt, where I can, to show scans of the various types. However, the scans will likely not show some of the attributes, such as sheen and streakiness. I will do my best to describe them in these instances.

In asserting that the appearance of the gum is a significant and collectible attribute, I like to draw an analogy between stamp gum and paint on a wall. Almost everyone is familiar with the different paint finishes available: high gloss, semi-gloss, satin, eggshell, matte and flat. Most will also realize that the different finishes are possible because of minute differences in the chemical makeup of the paint. I would assert that stamp gum is much the same: the degree of surface gloss, the texture, the colour, and how evenly it adheres to the paper when it is applied, are all attributes that will differ as the chemical composition of the gum changes, or its method of application, and therefore, significant differences in these attributes, are, in my opinion, different types of gum.

The gum used by the CBN shows a considerable amount of variation, in terms of colour, texture, its streakiness and sheen.:

The scans below show some of the above types of gum: 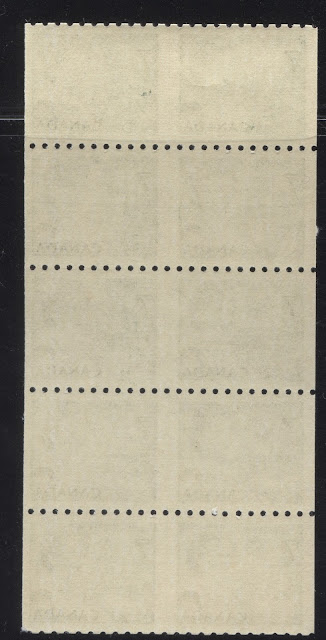 The above coil block shows the first type of streaky dextrose gum. The streaks are a little difficult to see at first, but if you stare at the block for a few minutes and allow your gaze to relax somewhat, you should able to see that the gum colour is not even: there are very small spots of lighter colour. These spots are the streaks.
Here is an example of the same gum on a plate block of the 10c Jack Pine, showing the streaks running in the horizontal direction: 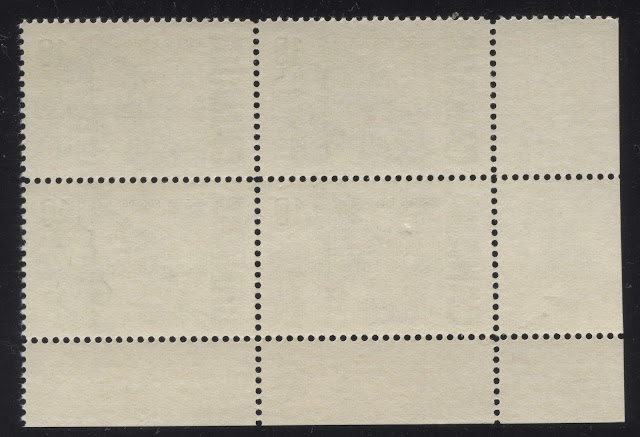 Finally, here is a third example, which shows much more prominent streaks in the gum. This example is a plate block of the 2c totem pole: 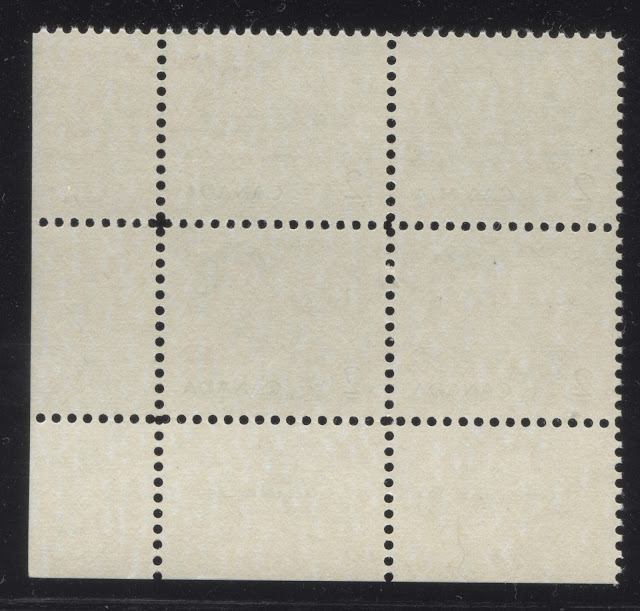 Here, you can see the uneven colour of the gum very easily. 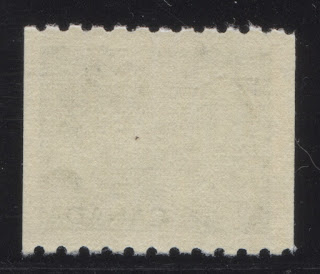 This coil shows the second type of gum. Note the light yellowish cream colour and how the gum on this stamp is completely even and smooth.
I have prepared an overlay scan, where I place this stamp on top of one of the stamps in the above block to try and show the difference between these two gums a little more clearly: 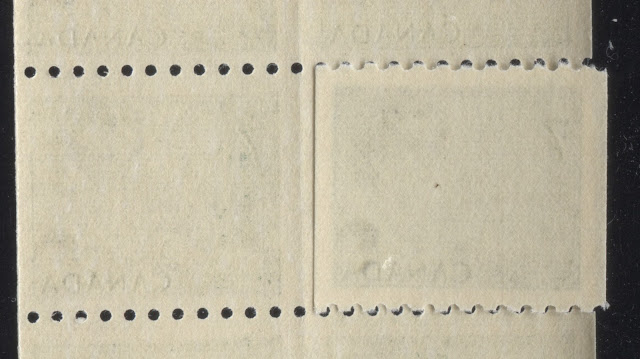 The scan below shows an example of the third and fourth types of gum on two plate blocks of the 10c Jack Pine: 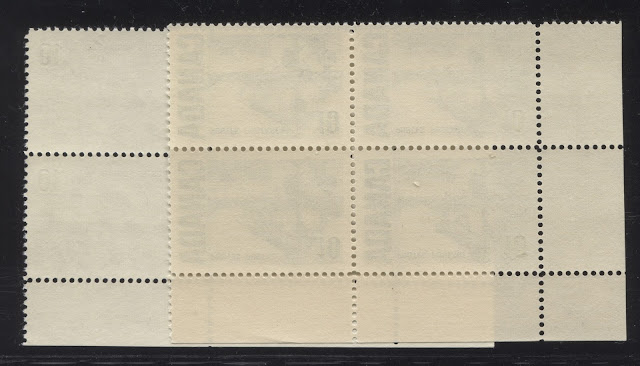 Here is an example of the fifth gum type, shown in the stamp on the left, next to the third type, on the stamp at the right:

Here is an example of the sixth type on a 1c stamp with Winnipeg centre bar tag: 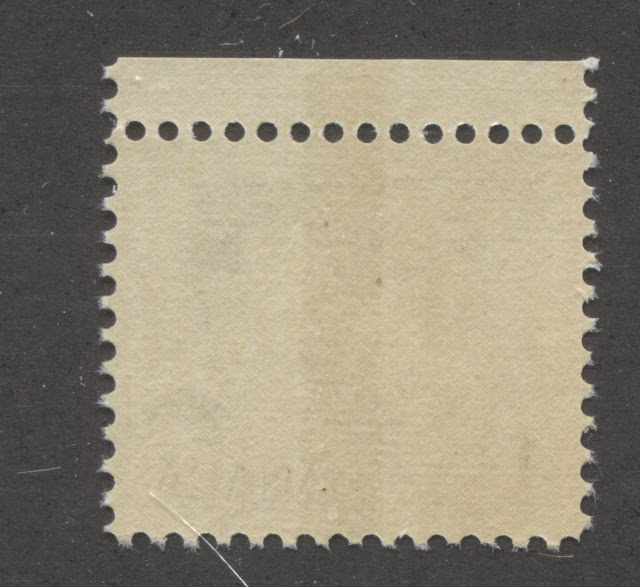 As you can see, it is similar to types 2, 3 and 4, except that the colour is a deeper yellow.
Finally, the seventh type is shown on the following plate 4 block of the 1c: 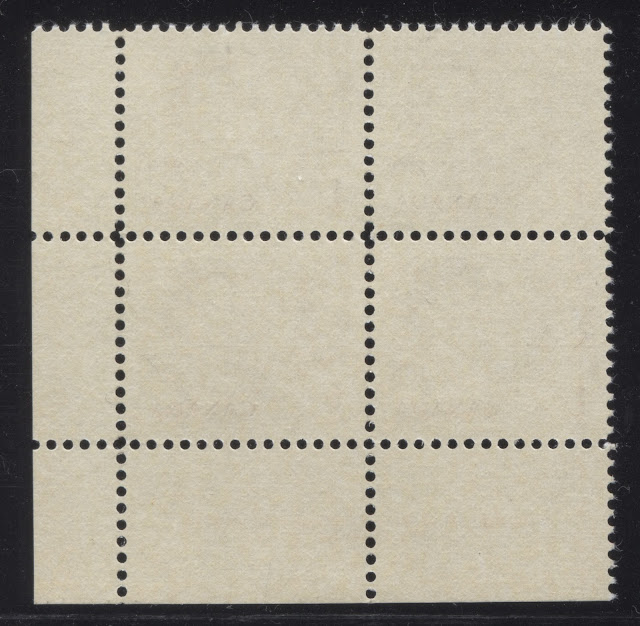 Again, if you look carefully at this gum, you can see that the colour is not completely even, but it is not streaky as the above examples of the type 1 gum are.
Finally, the eighth type is shown on this 50c Summer's Stores on the scarce hibrite paper: 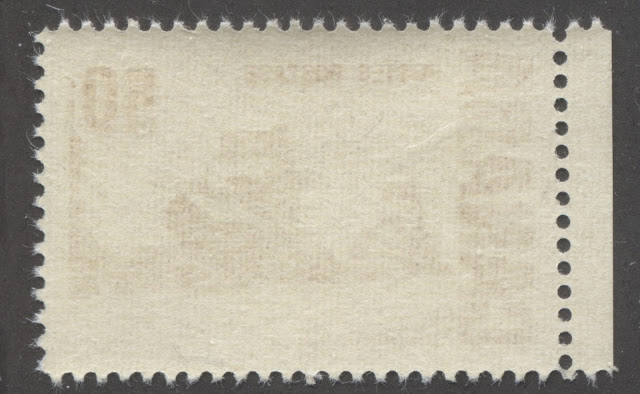 This scan clearly shows the strong vertical mesh that is present on the paper used to print this stamp. However, not all HB stamps look like this. I have other HB examples of this stamp that show no mesh and have types 2, 3 or 4 gum.

I have seen types 1 through 6 on all printings from 1967 to about 1970, so these were used throughout the period that dextrose gum was in use. Type 7 seems to occur mainly on printings from 1970, like plate 4 of the 1c, and 5c for example. I have only seen the type 8 gum on the 50c Summer's Stores printed on HB paper, but I suspect that it exists on the other CBN high values on HB paper as well. It looks like a transitional gum that was used in 1971 just before the spotty white gum was introduced.

The gum used by the BABN on the 4c carmine, 5c blue, 6c orange, 6c black, 7c emerald and 8c slate varies in colour from a very light yellowish cream to a pure white. So it is almost always much lighter than the gum used on the CBN printings. It is never streaky, always being smooth and completely evenly applied to the stamp. However, I have seen three distinct types that vary, both in terms of the sheen and the overall texture, as follows: 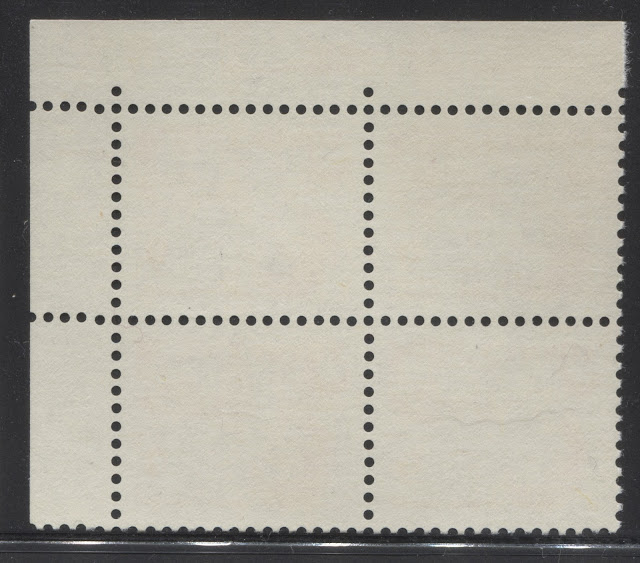 This is the high gloss gum with the horizontal streaks. They are difficult to see, but if you look carefully at the top selvage of the block, you can just see them. 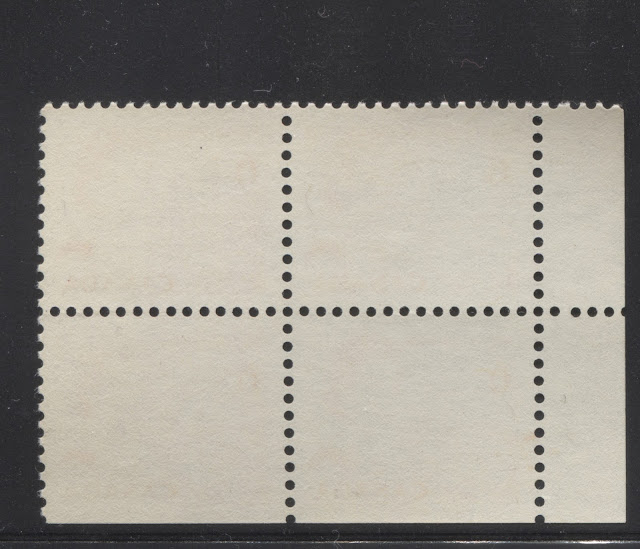 This is the semi-gloss gum that is completely smooth, with no streaks.

The third type of gum seems to occur mainly on printings of the 1c, 6c, 4c and 5c booklet stamps, and is shown in the following scan of a 1c pair taken from the 25c booklet:

Here you can see the diagonal pattern of fine cracks, right from the high-resolution scan.

The PVA gum most commonly seen on the stamps printed by the CBN is a light cream colour, is completely smooth, and has an eggshell sheen. Under magnification, more of a sheen is visible, and it is possible to see very fine cracks in the gum, however, when viewed normally, the gum is completely smooth. The gum is a thin gum, as its application does not alter the surface texture of the paper in the way that the BABN gum does. The BABN gum has a completely smooth and solid appearance, even under magnification, whereas with this type of gum, the natural rough texture of the stamp paper is still visible underneath the gum, as the gummed paper appears somewhat rough under magnification.

The scan below shows an example of this gum on the 2c totem pole: 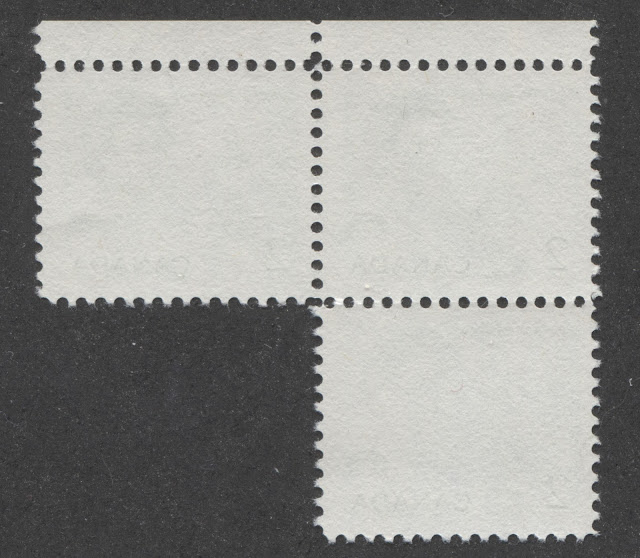 Note the smooth appearance, and the rough texture of the surface. The colour appears quite white when viewed alone, or in comparison to the dextrose gums. However, when compared to the pure white of card stock, it is actually quite creamy and off-white.

As you can see, these types are almost indistinguishable from the scan alone. However, you may notice that the gum on the right stamp (eggshell stamp) is slightly thicker than the matte stamp. The paper is also different, with the right stamp being printed on a vertical wove that shows clear vertical mesh when viewed against strong backlighting, and very light ribbing on the surface, when viewed under magnification. The perforations tended not to punch out fully on this type of paper and gum, so quite often you will find stamps with this gum having unpunched perforation discs adhering to the stamp, as in the above example.
Here is a scan showing the two types of PVA gum on the 10c Jack Pine: 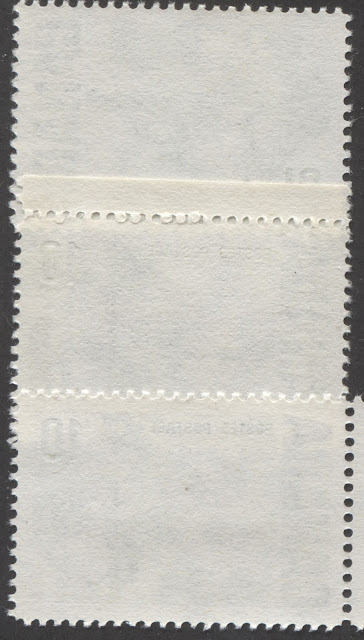 The matte gum is shown on the top stamp, while the bottom two are the slightly creamier eggshell PVA.
BABN Printings

There are three main types of PVA gum found on the BABN stamps that were produced in booklet form. The main points on which the gum varies are the colour and they surface sheen:


The scans below show these types: 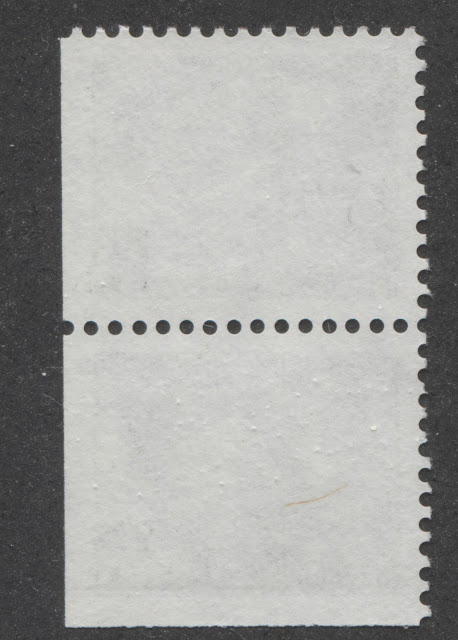 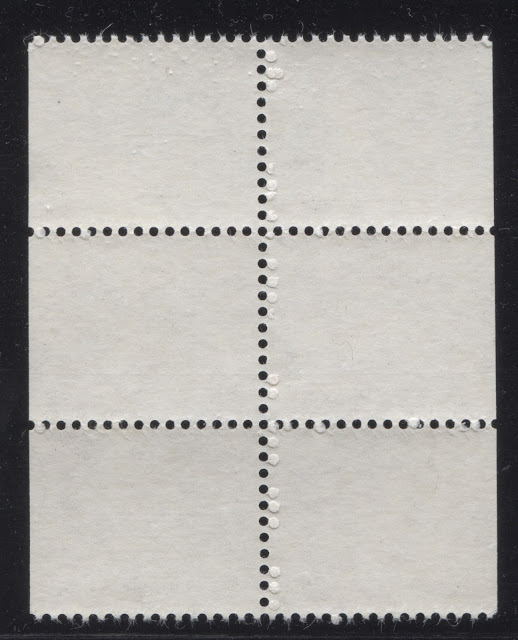 This is an example of the second type on a block of 6 1c stamps taken from the large $1 integral booklet issued in 1971-1972. The difference between this and the first type above, is not obvious from the scan, but the colour is clearly different, as the overlay scan shows: 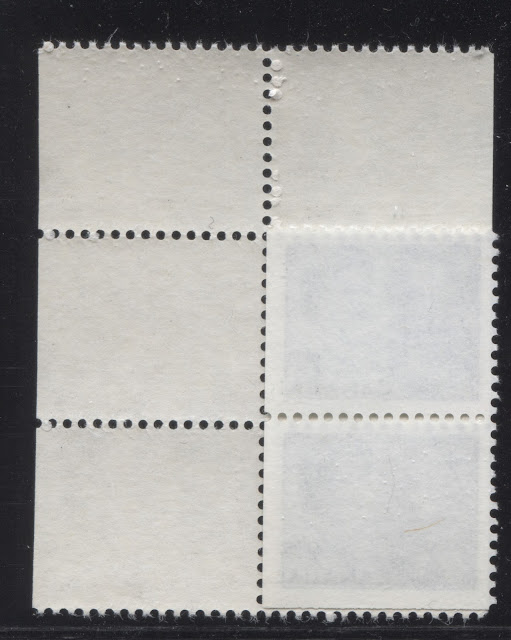 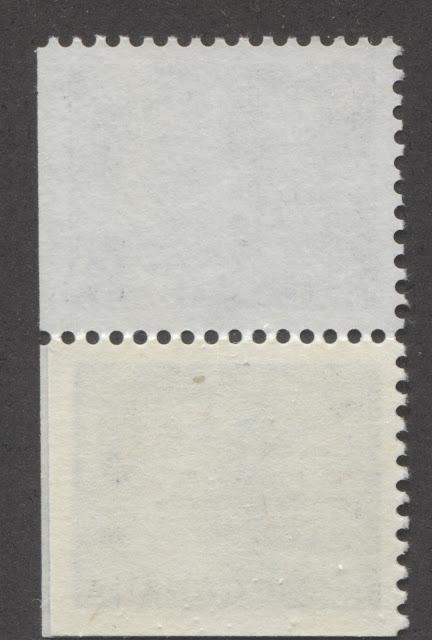 The cream gum is shown on the bottom, while the white gum appears on top.

The spotty white gum is actually a sub-type of PVA gum, being a streaky PVA with a semi-gloss sheen. The term "spotty" refers to the streaks that can often be seen in the gum, which result from tiny patches where the gum is thinner than the rest of the stamp. This type of gum is so far only known on certain printings of the 10c Jack Pine, made between 1971 and 1972. That this type is not known on the other values is a mystery, since they were all continuously printed in 1971, and common sense would suggest that the other values should exist with this type of gum as well. However, no examples have been reported on any value other than the 10c. There are slight variations in the surface sheen, from satin to semi-gloss, but all of the stamps I have looked at with this gum, have the gum quite white in comparison to the other gums discussed here.

The scan below shows two examples: one on a Winnipeg tagged stamp, and the other on an untagged stamp: 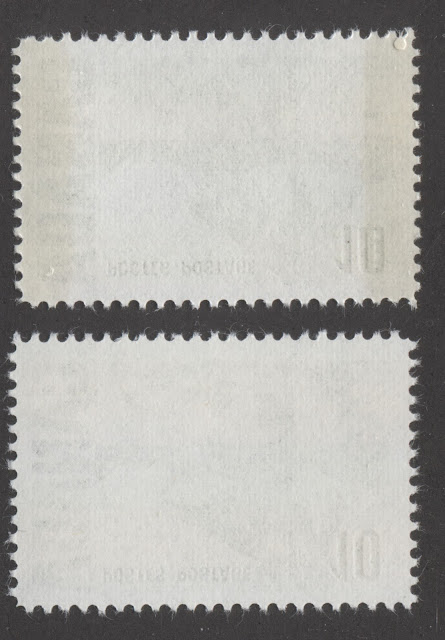 The streakiness of this gum is not visible from the scan at all. However, what is visible here is the distinct vertical ribbing of the paper on which this gum was used.

This concludes my discussion of the different types of gum found on this issue. Clearly there are some very major differences other than just the distinction between dextrose and PVA. Undoubtedly, there are many stamps from this issue which will likely only be found with the one gum type. However, there are many others that likely exist with three or four different varieties of dextrose gum, and many of the PVA gum printings probably exist with more than one type as well. I already gave one example: the 50c on HB paper, where I have seen two radically different types of dextrose gum and paper. So this is clearly an aspect of this issue that is more deserving of detailed study to establish, once and for all, what all the different gum types are, and which printings exist with which type.

Next week's post will look at the different types of ink that were used to print the stamps.
Filed in: 1967-1973 Centennial Issue, dex gum, Gum types, PVA gum, spotty white gum