The use of blue colour spans the entire life of the Admiral Issue, being utilized on three different values, as we shall see: the first 5c, the 8c, which was introduced in 1925 and the second 10c. Each of these blues is completely different as to shade, and it is possible to find many subtle variations on all of them - even the 8c, which until recently had no listed shade varieties in Unitrade. This is perhaps the worst named colour in Unitrade in general, with the word "blue" or "dark blue" used to describe nearly everything. As we shall see, in reality, many of the dark blues are shades of indigo, with some deep blues.

As with all my posts on shades, this post will illustrate the Unitrade listed shades on each of the 5c, 8c and 10c stamps and will cross-reference Unitrade's shade names to the Stanley Gibbons Colour Key.

The above three stamps are all examples of the common dark blue shades on this stamp. However, none of them are not actually dark blue according to Gibbons Colour Key. From left to right we have:
Unitrade indicates that these common shades all hail from after 1914. This is useful because it means that the paper and gum characteristics can be used to corroborate your identification of the shades. The indigo shades are the very first printings of this stamp, so they will have pre-1914 paper and gum charateristics. The grey-blue, although known as early as 1912, can be found with the later paper and gum characteristics as well. However, fortunately the shade is very distinct and should jump out at you when you see it.

The above stamps are all examples of Unitrade's indigo shade. As you can see these are very distinct from the dark blues above. They are much, much deeper. According to Gibbons Colour Key, from left to right we have:
Only the last stamp is the true indigo shade, which contains a black cast to it. Only the first and last stamps shown above have this blackish cast. However, all of them are sufficiently dark that the danger of confusing them with with the more common dark blue shades is very remote.
Grey blue 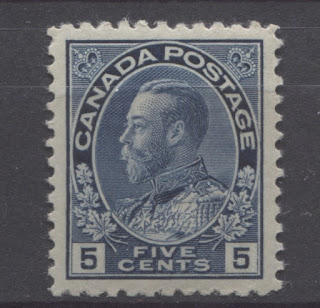 I have only one example of this shade, and it is shown above. This is actually closest to Gibbons'steel blue shade. However, you should be able to see that it is a much duller blue than any of the others.
Comparing the Shades
The scan below shows each of these shades again side by side so that you can see the differences:

From left to right, we have:
8c Blue 1925-1928
Unitrade lists only two shades for this stamp:
The differences between the shades on this stamp are extremely subtle, but if you have an eye for detail and are patient, you will begin to notice that there are several different shades of this stamp and the Gibbons Colour Key will help you distinguish them.
Blue

The above stamps are all examples of the Unitrade listed blue shade. These are all closest to the Prussian blue shade shade of the 5c above. However, in general, these blues are all duller than the common dark blue shades of the 5c. Using the Gibbons Colour Key, from left to right we have:

The above three stamps are all examples of the light blue, which I would point out, looks nothing like Unitrade's light blue shade on the 10c. I mention this because if you sort through a number of 8c stamps looking for a shade that looks like the 10c light blue, you are never going to find it, and you will then classify pretty much everything as just the regular blue. As you can see, this group of shades is definitely lighter than the one above, but you can also probably see how, without the two side by side, you could easily mix them up. All of these are closest to the bright blue swatch in the Gibbons Colour Key if it were made lighter.
Comparing the Shades
Below is a comparison scan of the two main shades, side by side so you can see the difference better: 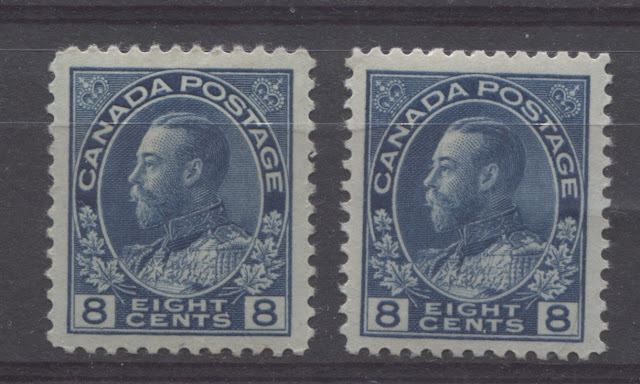 On the left is the Prussian blue (the common blue) and on the right is the deep bright blue (the Unitrade listed light blue).
The 10c Blue -1922-1925
Although this stamp was only in use between 1922 and 1925, when the 10c bistre brown replaced it, there is perhaps the widest range of blue shades with this stamp. Unitrade lists only blue and deep blue, but there is a much wider range of greenish and milky blues. This stamp was printed by both the wet and dry processes, and Unitrade does list both shades for both printing processes. However, as we shall see, the blues of the wet printings are quite different from the blues of the dry printings. Unfortunately, I do not have an example of the light blue dry printing at the present time. However, when I acquire one or more, I will definitely update this post to include an example.
Blue Wet Printings

The above stamps are all examples of Unitrade's blue. As you can see, these are all either greenish or milky compared to the blues of the 8c or 5c above. According to the Gibbons Colour Key, we have from left to right:
Blue Dry Printings 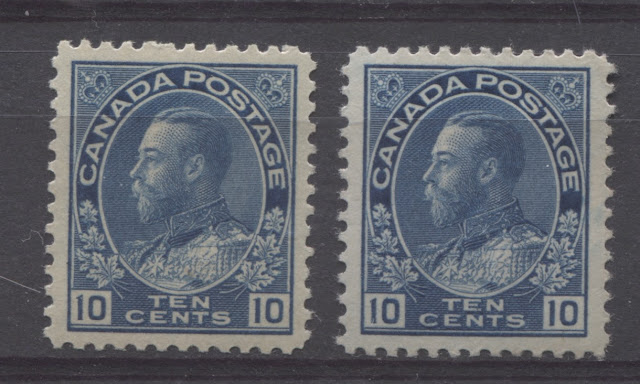 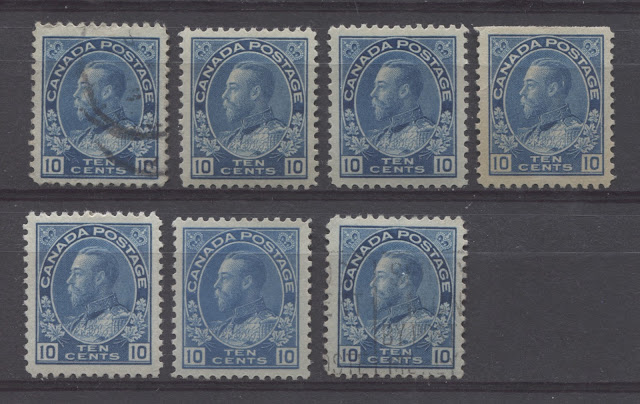 I believe that all seven stamps shown above are examples of the Unitrade listed light blue shade of the wet printings. The stamp at the bottom centre is an extreme example, while the others are all less extreme, but nonetheless lighter than the regular blue shades. Most of these are sub-shades of either Prussian blue or new blue as listed in the Gibbons Colour Key. From left to right, on each row we have:
Comparing the Shades
The scan below shows the blue and light blue listed shades side by side for comparison: