This weeks's post continues my exploration of the printings of the 8c slate definitive from this series, which depicts the Parliamentary Library from the centre block of the Parliament Buildings in Ottawa. This week, I will examine the printings of the Winnipeg Tagged sheet stamps. The Winnipeg tagged stamps were issued with both dextrose gum and PVA gum. The dextrose gum printings were released at the same time as the untagged stamps on December 30, 1971. However, the PVA gum versions were released between July 1972 and November 1972, after the General Ottawa tagging replaced Winnipeg tagging as the standard tagging, which is interesting. This may account for the expensive nature of the printings on high fluorescent paper - because they were likely provisional printings made to fill in supply fluctuations of the Ottawa tagged stamps that happened when it became apparent that the OP-4 taggant that was being used for the Ottawa tagged stamps was unstable and needed to be replaced by a more stable compound.

Unitrade lists three basic varieties of the Winnipeg tagged sheet stamps as well as the "extra spire" variety on the PVA gum printings from plate 4. So, this will be a shorter post than last week. The amount of material in my stock that I have to work with is quite limited. So, it is quite likely that other varieties exist that I have not detailed here, but I will add them as they become apparent and I can write about them and illustrate them.

Apart from the fluorescence level, I have found three different types of paper used for the printings of these stamps:

The following pictures illustrate the key attributes of each of these different papers: 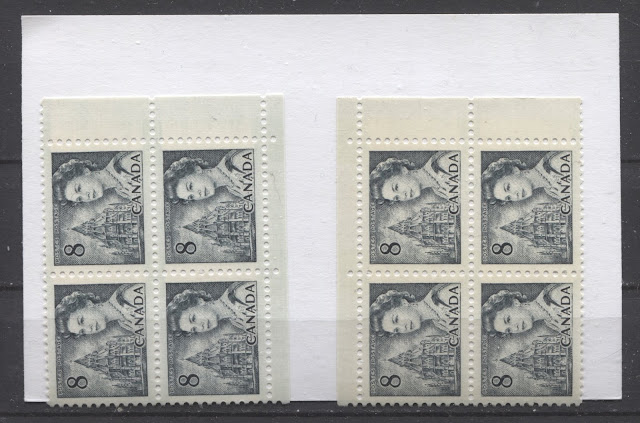 This picture shows the noticeable difference between the cream papers and the white papers. I have placed a stark white stock card behind the above blocks to highlight the differences more fully. The white paper is shown on the left. It is not as white as the stark white, but it is still clearly white. The cream paper is illustrated by the block on the right. 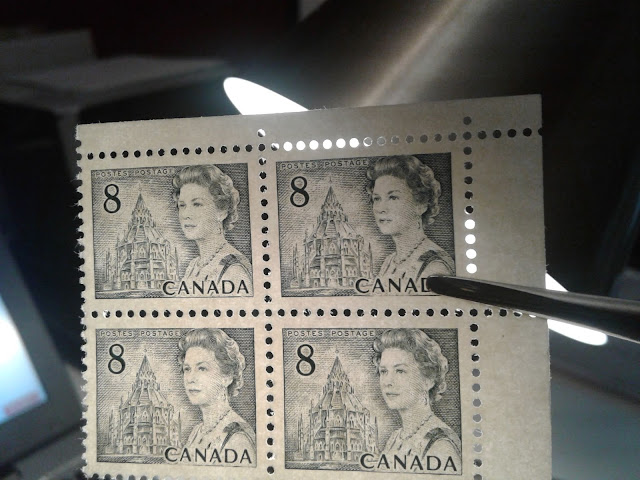 This picture shows the non-ribbed paper viewed against strong backlighting. Note the complete absence of any visible mesh pattern in the paper. 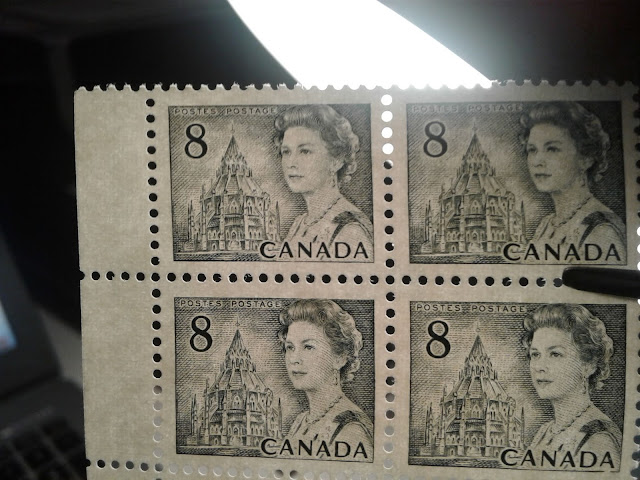 This picture shows the weakly ribbed paper viewed against strong backlighting as well. Here, you can just see the vertical mesh pattern in the selvage tab on the left. However, it is not a strong appearing mesh pattern by any means. 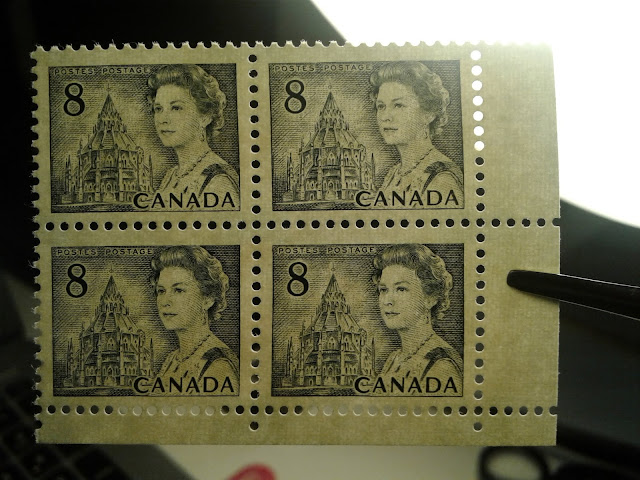 Here is the strongly ribbed paper viewed against strong back lighting. Note how strong the vertical mesh pattern in the paper is.

The picture below shows the difference between the dull fluorescent greyish paper and one of the low fluorescent papers: 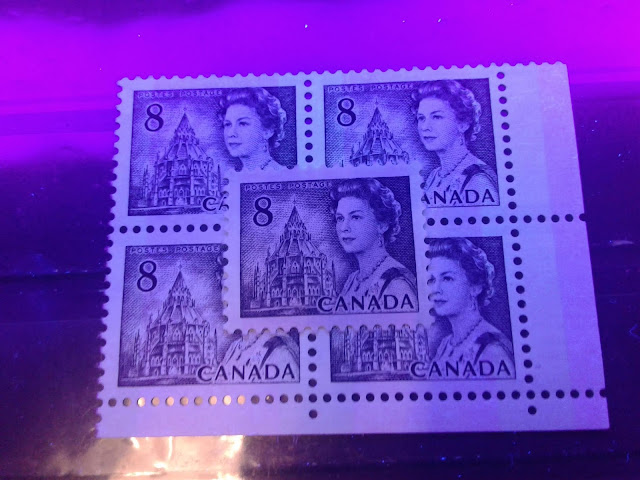 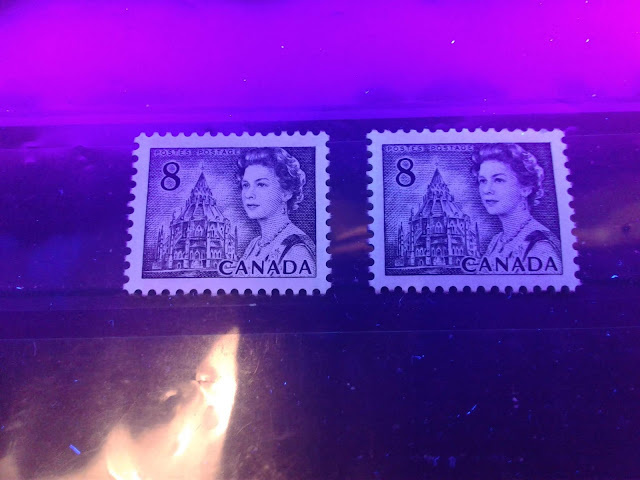 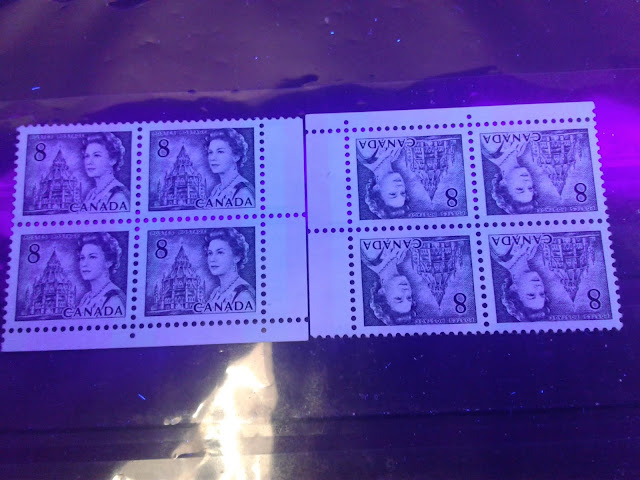 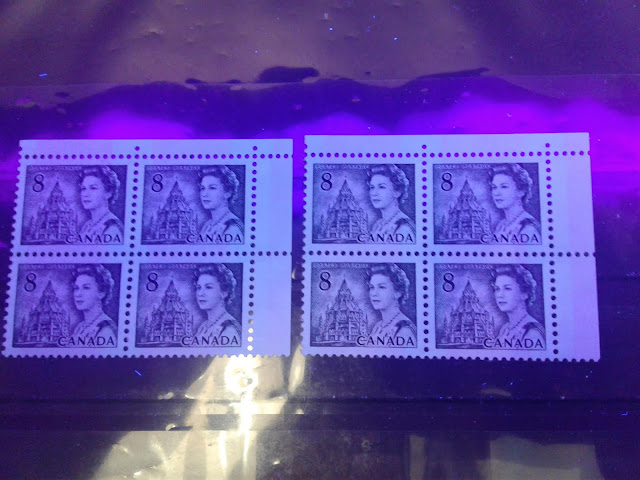 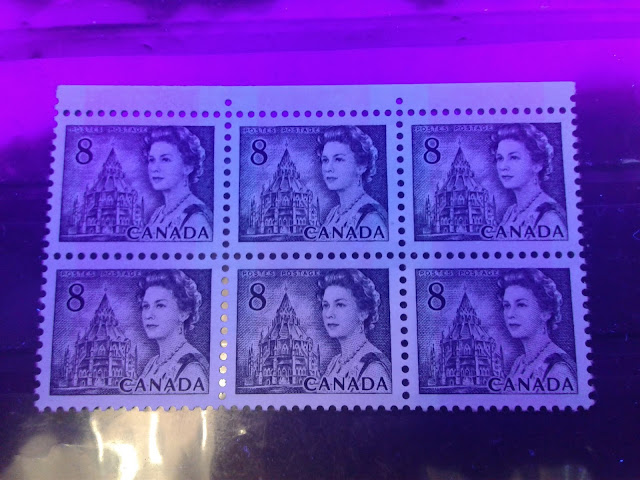 The slate ink is a fairly uniform colour on these stamps. However, I have detected one slight variation that seems to occur on those printings that are on cream paper. The slate ink normally contains quite a lot of blue. However, I have found a slate ink that contains noticeably less blue. The scan below shows both shades of ink side by side in blocks of 4: 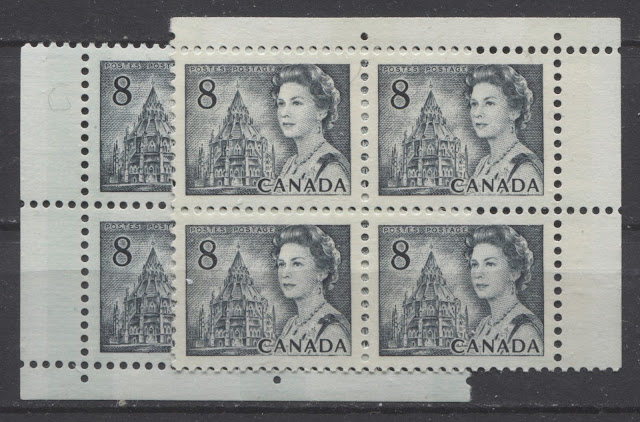 The normal deep bluish slate ink is shown on the left, while the right block is more of a pure deep slate shade. The shades do not appear any different under UV light, which means that the inks are non-transformative.

The gum on these stamps exhibits much the same variation as on the untagged stamps, though I have yet to locate an example with what can be called truly crackly gum. The three types of gum that I have located thus far on these stamps are:


These three types of gum, as they appear on this stamp are shown in the pictures below: 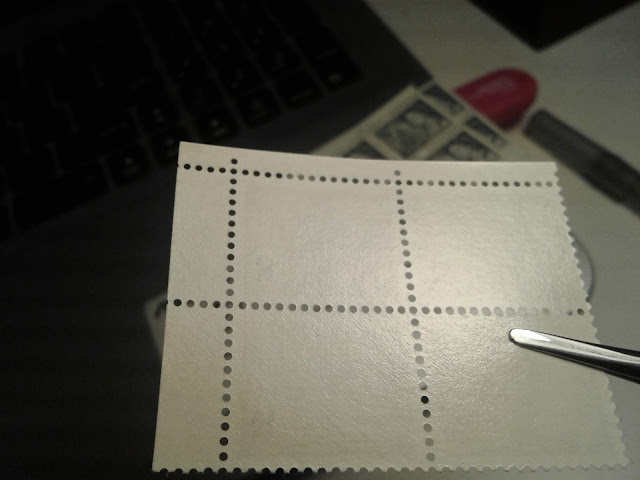 The semi-smooth gum. You can just see a very slight crackliness to the surface, but overall it appers smooth. 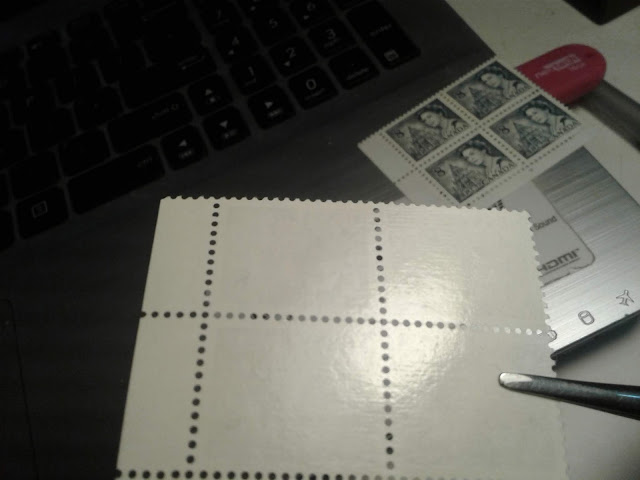 The high gloss gum showing the tell-tale light reflection in the surface. 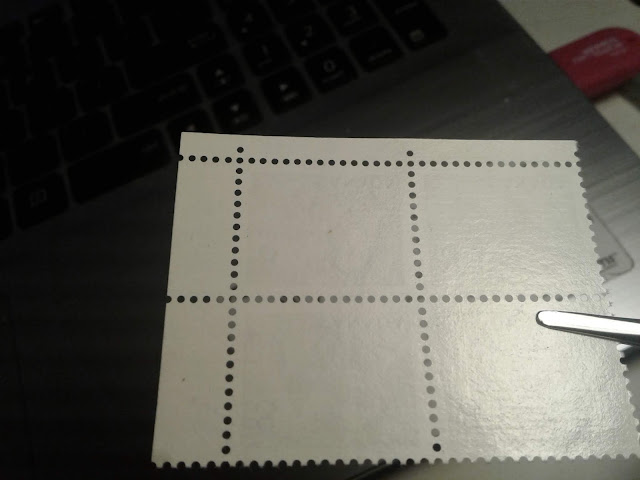 The semi-gloss gum. Note how there is no crackliness to the surface, but at the same time, there is much less reflection of light.

The tagging on these stamps consists of 8 mm bands that were applied down the vertical perforations in the sheet resulting in 4 mm bands approximately on each side of the stamp. The spacing between each band was approximately 16 mm and unlike earlier versions of the Winnipeg tagging, there does not appear to be any variation between the horizontal spacing between tagging bars.

In normal light the tagging bars are somewhat difficult to see on most stamps, and appear as a slight discolouration of the paper on the sides of the stamp. However, occasionally the slate ink has coloured the paper and tagging, causing it to take on a light bluish appearance and thus making it easier to see. The scan below shows two different blocks with both types of tagging:

The block on the left shows the appearance of the normal Winnipeg tagging on a white paper block. It is very, very difficult to see. However if you look at the right selvage tab just under half way over from the left you can just see a vertical line of very light discolouration. The block on the right shows the very light bluish bands and the resulting discolouration of the paper is much more visible in the selvage tabs.

Under UV light, the tagging glows a light bluish white colour, and this glow is the same for all blocks that I examined as shown in the picture below: 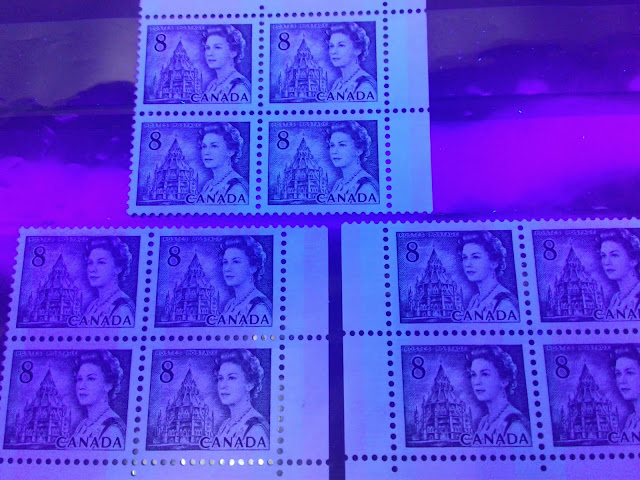 Rose lists only one tagging error on the dextrose gum printings, being what he classifies as W2aL, which means a single 8 mm band on the left side of the stamp, and no band at all visible on the right.

There are no listed major plate flaws on the dextrose gum printings. As Unitrade states, there are over 75 constant plate (cylinder) varieties on this value. It is not clear whether or not all of these are from a single plate, or whether some occur on some plates, but not others. I believe that Robin Harris lists most of them in his book about the Centennial Definitives.

Bringing It All Together

Although these were printed from plates 1, 2 and 3, there are no plate inscriptions for any of the blocks, since these are tagged issues, and all tagged stamps were trimmed of plate inscriptions prior to distribution. I have identified 3 different types of paper, 7 levels of fluorescence, 2 shades, 3 types of gum, 2 different appearances to the tagging and the tagging errors. It is not clear if each variety can be found in tandem with the others - some types of paper may only exist with 1 or 2 levels f fluorescence. However, if they all exist in the maximum number of permutations, then there could be as many as: 3 x 7 x 2 x 3 x 2 x 2 = 492 different collectible stamps. There are 12 different collectible positions of each corner block, so that there could be up to 492 x 12 = 5,904 different collectible corner blocks.

I have found only one single type of paper used to print these stamps. It is a thinner horizontal wove paper, which shows clear vertical ribbing on the printing surface of the paper. This paper has a light surface coating, and a strong vertical mesh pattern is visible when the stamps are held up to the light.

The pictures below illustrate these varieties: 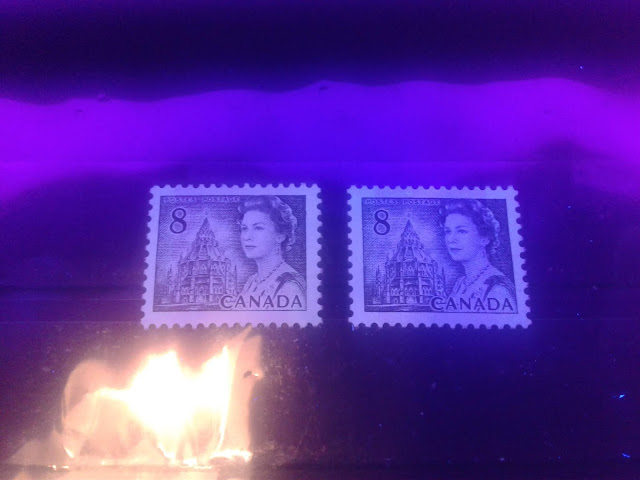 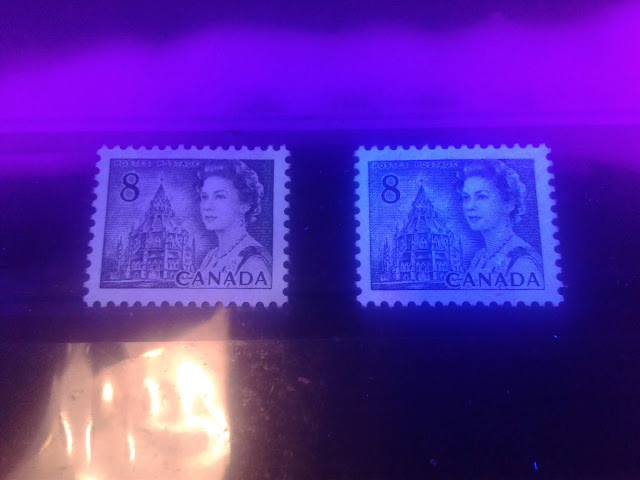 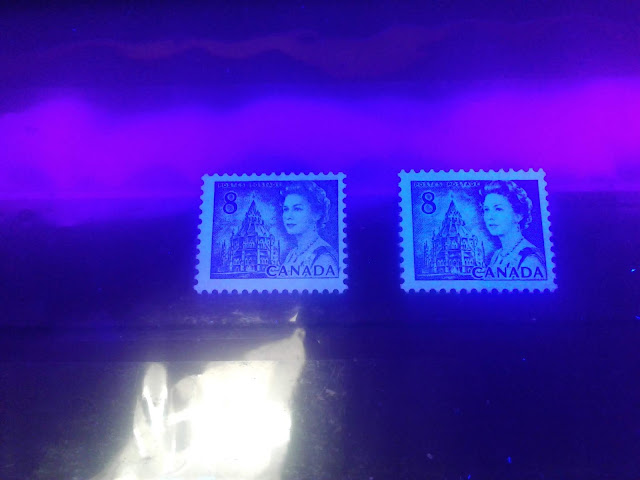 Like the dextrose gum stamps, the shades of ink are fairly uniform. I have found two slightly different shades as before. One is a deep bluish slate and the other is less bluish, containing a hint of grey. The scan below shows the two shades side by side:

The gum on all of these stamps is a white, smooth PVA gum that has a satin sheen.

The perforation of the PVA gum printings is exactly the same as for the previous dextrose gum printing, being comb 12.5 x 12, with the same configuration on the sheets. 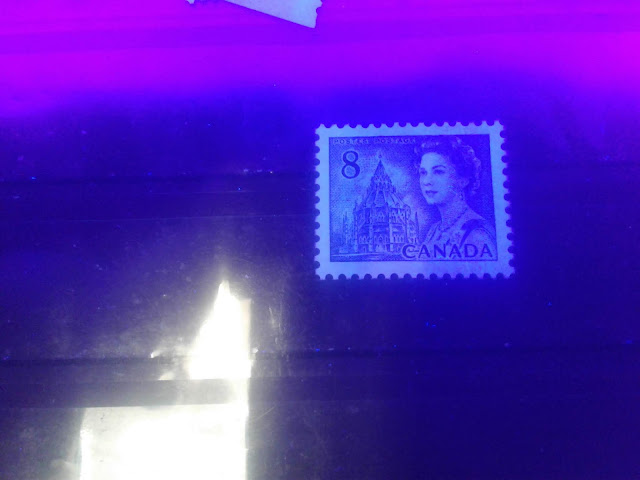 The picture below illustrates both of these errors, though they are very difficult to see because of the paper fluorescence: 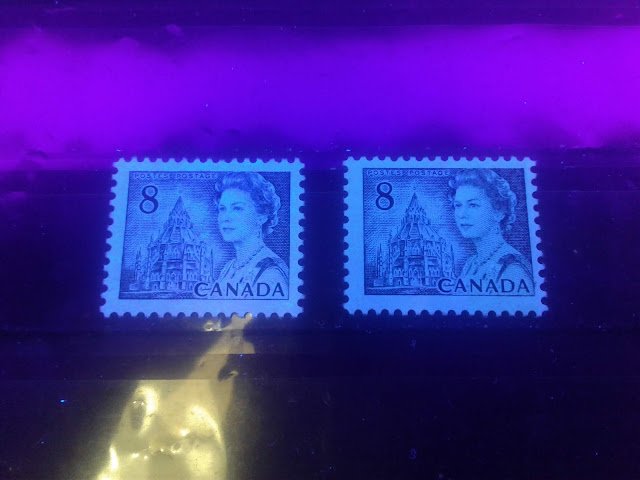 As all of the Winnipeg tagged PVA gum stamps were printed from plate 4, they exist with the "extra spire" flaw that was discussed in last week's post. There are no other major listed constant plate flaws for this stamp. However, as stated in Unitrade, there are more than 75 constant cylinder varieties on this stamp. It is not clear though how many of these exist on the plate 4 printings with Winnipeg tagging.

Bringing It All Together

This is a much simpler stamp than the dextrose gum stamp. I have only identified one type of paper, six levels of fluorescence, 2 shades and the two tagging errors, which effectively means three different types of tagging (the two errors and the normal). Therefore there could exist as many as 36 different collectible stamps and 36 x 12 = 432 different corner blocks.

This concludes my examination of the Winnipeg tagged sheet stamps. Next week, I will look at the printings of the General Ottawa Tagged sheet stamps and the tagged coil stamps that were printed by the CBN.
Filed in: 1967-1973 Centennial Issue