The 8c Alaska Highway Stamp of the 1967-73 Centennial Issue

Today I begin to examine my favourite part of the entire Centennial series: the high values. These stamps were all reproductions of paintings by members of the famous Group of Seven. The high values consist of an 8c, 10c, 15c, 20c, 25c, 50c and $1 value. Today's post will explore the first of these, being the 8c.

The stamp was printed in shades of purple brown and depicts the painting "Alaska Highway", by A.Y Jackson. It was only a high value during the period, when the first class letter rate was less than 8 cents. When the letter rate increased to 8c on December 30, 1971, this stamp ceased to be issued and was reduced to low value status and replaced by the 8c Parliamentary Library design that was the subject of my posts for the past several weeks. Because it was replaced at the end of 1971, it is not known to exist with PVA gum. Though it seems curious that it doesn't since there were plenty of stamps issued in 1971 that at least were the experimental spotty gum and some PVA. Interestingly it is one of the few stamps in the set that was never issued in tagged form either.

Unitrade originally did not list any varieties for this stamp, but over the years variations in the paper fluorescence have been added until now there are four varieties of fluorescence listed. In addition, a plate flaw called the "plastic flow" variety is listed now, which will be shown in a separate section. However, these listed varieties do not reflect all that there is to collect with this stamp. In addition to paper fluorescence, there are at least two shades, several variations in the dextrose gum found and differences in other characteristics of the paper besides fluorescence. Today's post will deal with all of these things.

In addition to the differences in the levels of fluorescence found, the papers used to print this stamp differ in terms of the colour in normal light, the direction of the paper weave, as determined by the direction in which the paper bends most easily, whether a surface coating is visible under magnification on the printed side, whether or not any ribbing or mesh is visible when the stamp is viewed normally and whether or not a clear mesh pattern is visible when the stamp is viewed against strong back lighting.

The paper varieties that I have found so far in my examination and study of this stamp include:

In examining the paper fluorescence, I am going to take a slightly different approach this time and look at each of the above five paper types and look at the fluorescence levels within each paper type, then I will relate it back to the main Unitrade listings.

These papers appear to all be variations of the basic dull fluorescent paper. There are three colours of this paper under UV, as well as some papers that contain 1 or 2 medium fluorescent fibres - a negligible amount, but not none. The pictures below show these types of paper. See if you can see any differences, though they are all very subtle: 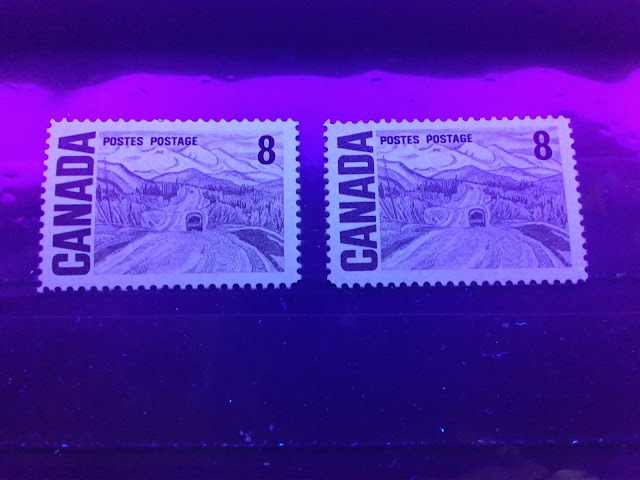 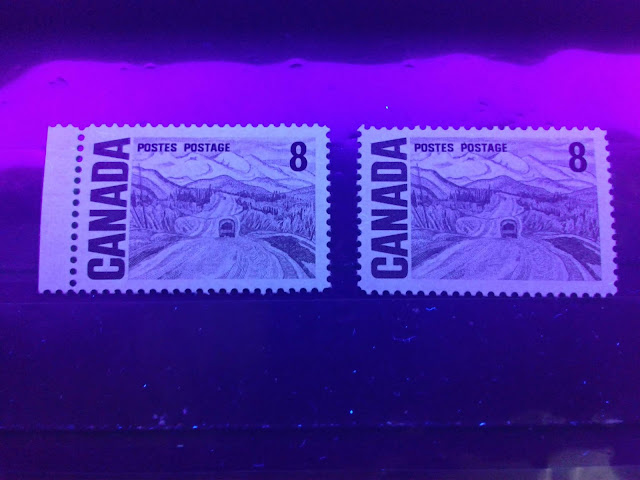 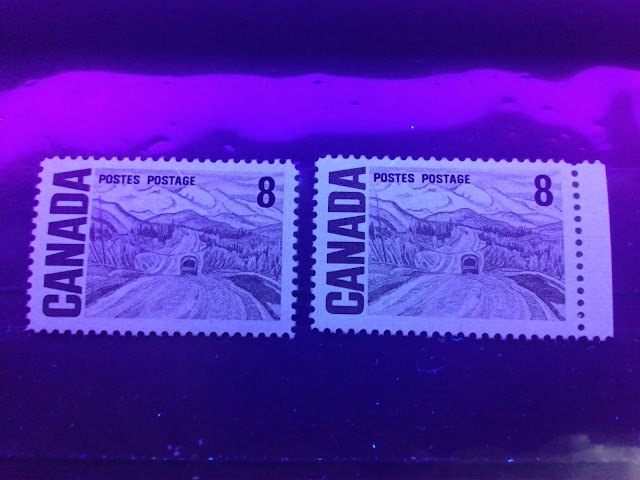 Then lastly we have the violet grey and ivory grey papers containing 1 or 2 medium fluorescent fibres. The amount of fibre is so small as for this paper to be considered the same as the non-flecked paper above. However, the presence of the fibres does make the paper different in my opinion. You can see the fibres in the picture between the "AG" of "Postage" of the stamp on the left and above the "OS" of "Postage" in the margin of the right stamp.

All three of the stamps I have examined on this type of paper show a significant amount of fluorescent fibre content, though none of them are otherwise non-fluorescent. Despite this, I believe that they fall under what Unitrade lists as #461i, which is the non-fluorescent flecked paper. The three types of this paper are shown below: 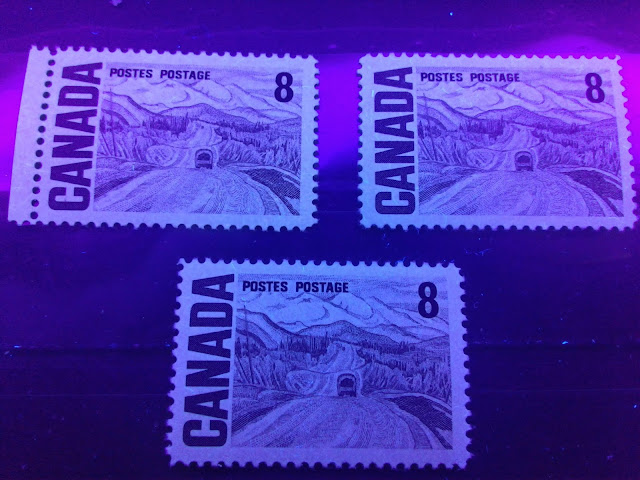 The flecks are difficult to see at first, but you can see them in the form of mottling of the fluorescence  on the top of the upper stamps and the bottom of the lower stamp.

The picture below shows a single close up picture of the low fluorescent stamp, which shows the fluorescent fibres more clearly: 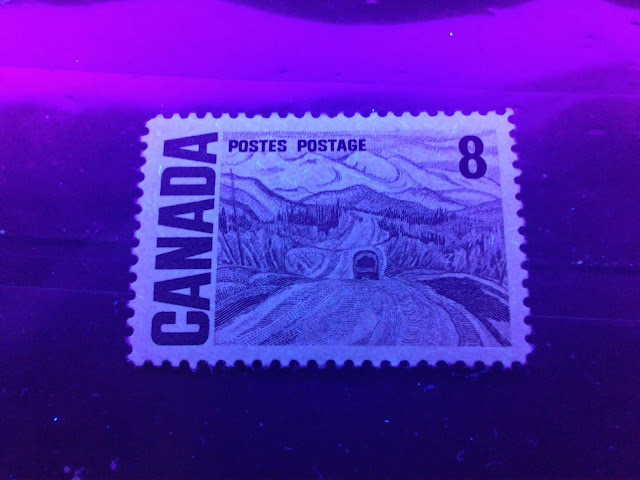 If you look at the top of the picture near the 8 you should be able to see some fibres and to the left of the "D" of "Canada". 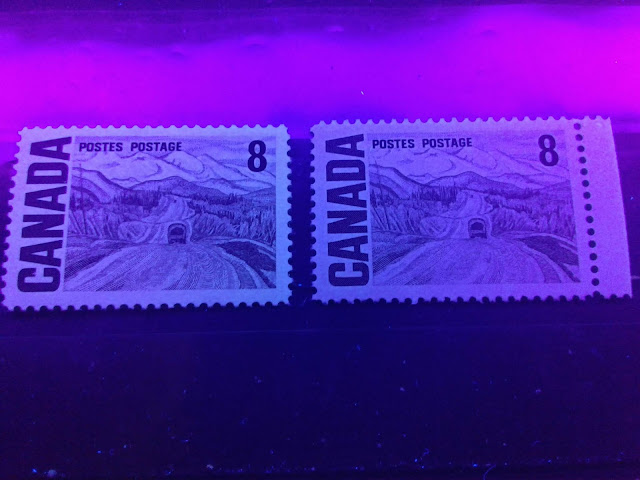 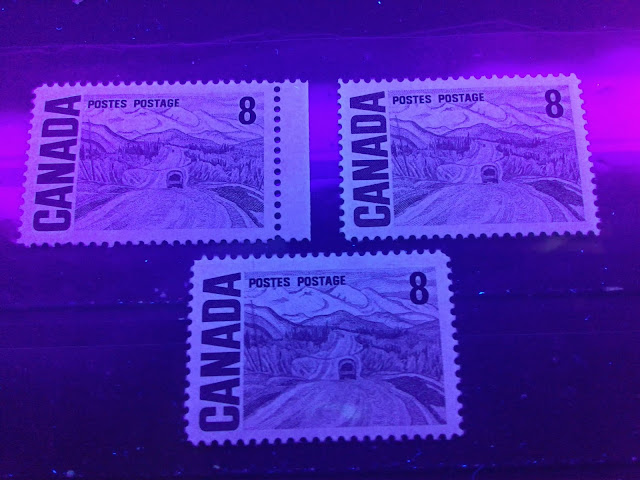 Here we have three variations of the non-fluorescent paper. The top left stamp is the grey violet, the top right is the light grey violet and the bottom stamp is the violet grey. 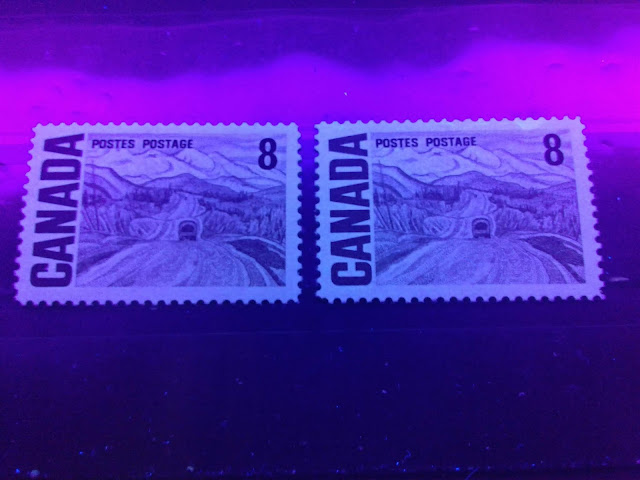 These two stamps are both dull fluorescent violet grey under UV. The stamp on the right contains very few medium fluorescent fibres.
Paper Type 4
I only have one single example on this paper, but it is of a low fluorescent flecked variety, which interestingly is not listed in Unitrade now, though I do believe it was listed several years ago: 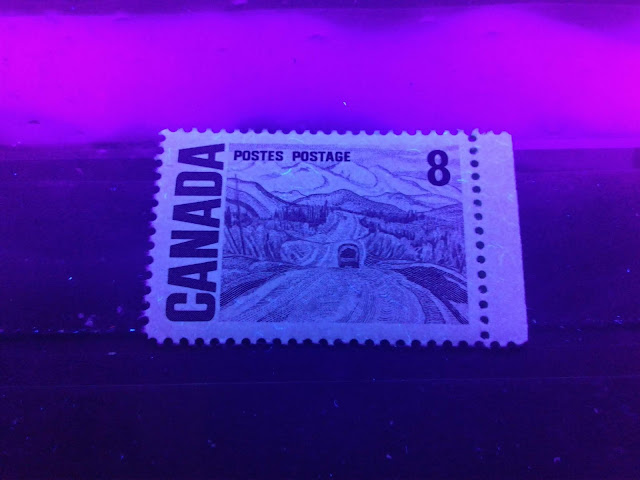 This paper looks greyish here, but in reality it is really a dull fluorescent bluish white under UV. It contains very sparse concentrations of low, medium and high fluorescent fibres. 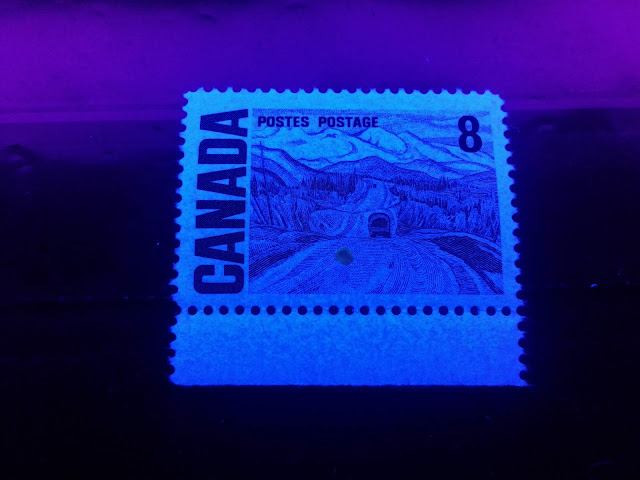 This paper is what Unitrade lists as the hibrite paper. I believe that the brightness likely does vary somewhat. Unfortunately, I only have this example to work from, but I suspect that there are likely brighter examples than this that are true hibrites. This one is really more of a high fluorescent than a true hibrite.

I have found four different shades of the ink used to print this stamp, as shown in the scan below: 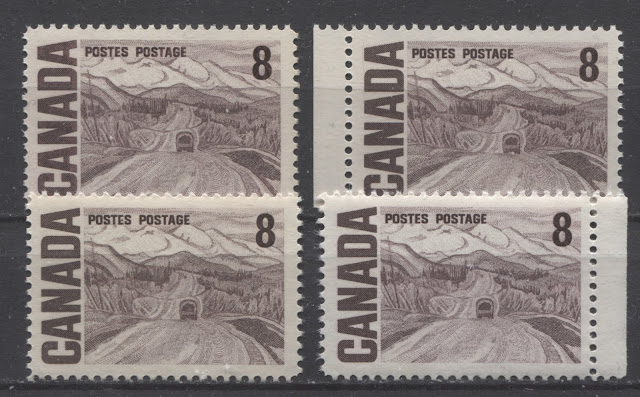 The easiest way to see the difference between these shades is to compare first the top left stamp and the bottom left stamp. You will instantly see that there is a very distinct reddish purple undertone to the colour, whereas the bottom left stamp appears more brownish than purple. The shade of the top left stamp is closest to pure maroon on the Gibbons colour key, but with maybe just the slightest hint of brown. The lower left stamp does not correspond to any of the shades on the Gibbons key, but I can tell that it is a violet brown shade.

Under UV, these inks appear deeper than normal, but not significantly different from how they appear under normal light. The only printing where the ink does appear slightly different is the hibrite paper. Here, the ink appears black. So on this printing the ink is transformative, whereas on all the others I have examined it is non-transformative.

There are several varieties of the dextrose gum that was used on these stamps, which differ by their colour, the evenness with which they coat the paper and the surface sheen. Like the paper fluorescence, I will describe each type with respect to the paper type and will then illustrate the different types.

On this paper, I have found three types of dextrose gum. All are a light yellowish cream colour and all have a semi-gloss sheen:

The pictures below show the differences: 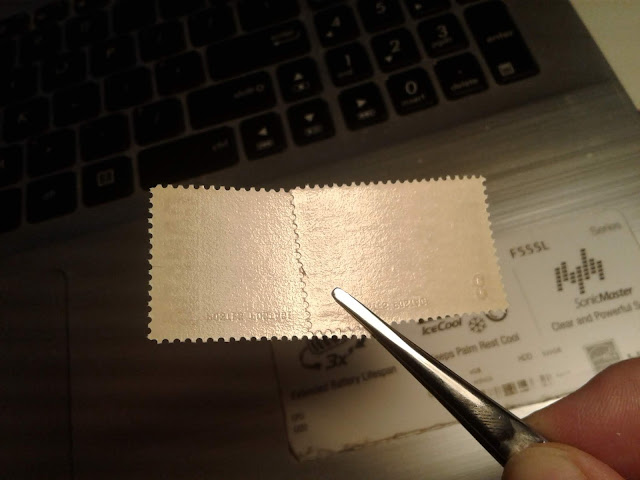 Here we see the smooth and slightly streaky gums. The smooth gum is shown on the left and has no blemishes whatsoever, while there are just a few natural blemishes visible in the gum on the right. These are not gum disturbances, but natural variations in the thickness of the gum that came about when the gum dried after being applied. 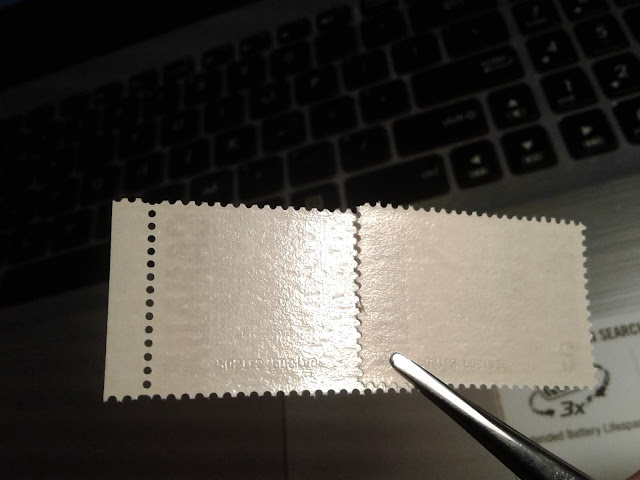 Here we see the difference between the semi-streaky and streaky gums. The streaky gum is shown on the left. Note how many more blemishes there are on this type of gum.

On this paper type I have found three types of gum again:

The picture below shows the difference between these last two types of gum: 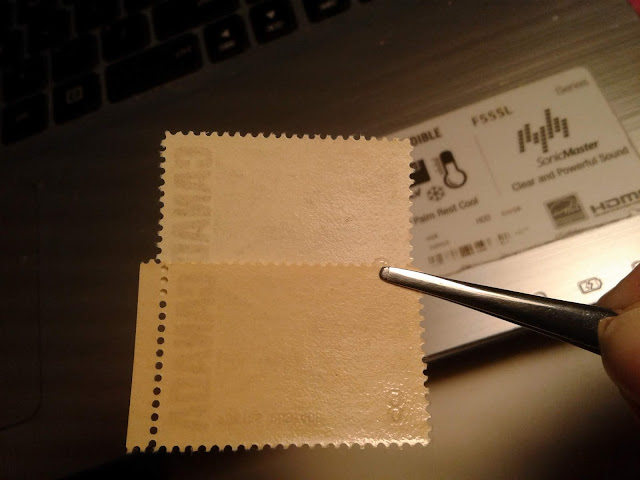 As you can see, the difference in the colour of both smooth gums is quite noticeable.

On the stamps in this group I have found both the smooth and streaky gums.

On the single stamp that was found with this paper, the gum is a smooth yellowish cream that has a satin sheen. Upon close examination, it can be seen that the reason for the difference in sheen is due to a very fine pattern of cracks that are visible under magnification. A picture will not be of sufficiently high quality to show the difference between this gum and the yellowish gum above.

The single stamp on this paper is a light yellowish cream that has a satin sheen and shows very slight blemishes. A picture of this type is shown below: 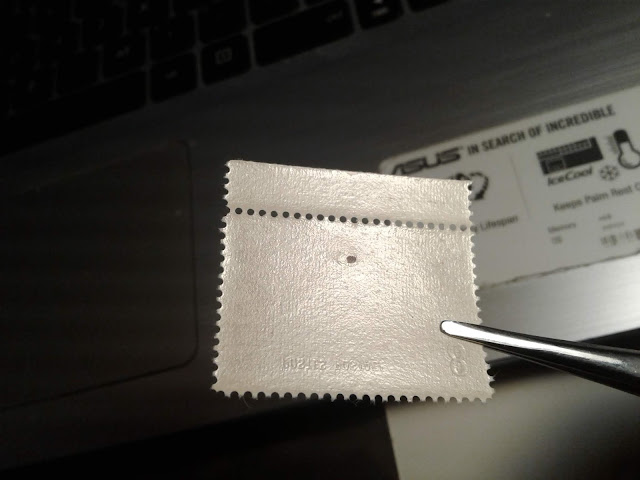 Again, this gum has a very distinct appearance compared to the other dextrose gums shown.

One constant variety that is found on the right two stamps in a block of 4 is known as the plastic flow variety. It is a slight doubling of the 8 that consists of a thin outline on the left side of the 8 and the inside of the 8 on the right side. The variety is illustrated in the high resolution scan below: 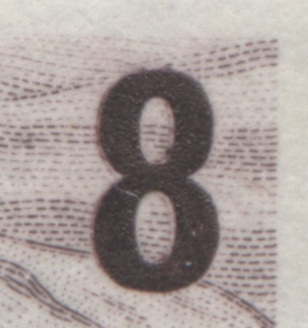 Here you can clearly see the additional outline along the left outside edge of the "8" and the right inside edges. It is quite a scarce and sought after variety. As best I can tell, it can exist on all paper and gum types, as well as all shades. A separate study devoted to this variety would help confirm whether there are some varieties that it does not exist with, or if others predominate the mix.

Although I no longer have an illustrative example to show here, I have seen examples of this stamp that show large dot flaws on the mountain in the background on the right side. I have not, as yet found any other plate flaws on this stamp.

This stamp was printed from 2 plates and so 8 basic plate blocks of any given combination of varieties can be collected. The stamps were printed in sheets of 300 that were guillotined into 6 panes of 50 stamps each. There are thus 12 different blank corner blocks that can be collected from field stock sheets that differ according to the relative widths of the selvage tabs.

In terms of determining the number of collectible variations, it is useful this time to consider the question by paper type. If we ignore, for the moment, the four possible perforation varieties on each stamp we have:

So, this is an interesting and much more complicated stamp than you would think from looking at the Unitrade listings. If all of the above varieties can be found with all four perforation measurements, then the number of collectible varieties in each paper type above will quadruple.
This concludes today's post about this value. Next week I will begin a new mini-series of posts about the next stamp in the series, the 10c Jack Pine, by Tom Thompson.