The 1c booklet stamps printed by CBN were only issued as part of the 25c red and white booklets that were issued between February 8, 1967 when the set was first released and September 1968 when the next 25c booklet containing 4c and 1c stamps replaced it. Consequently, all of the booklet stamps exist only with dextrose gum. Since the stamps were only printed between 1967 and 1968, they would all have been printed from plate 1 and 2.

The papers employed to print these stamps is similar to that used for the sheet stamps, with some differences:

The high resolution scan below shows the appearance of the vertical mesh: 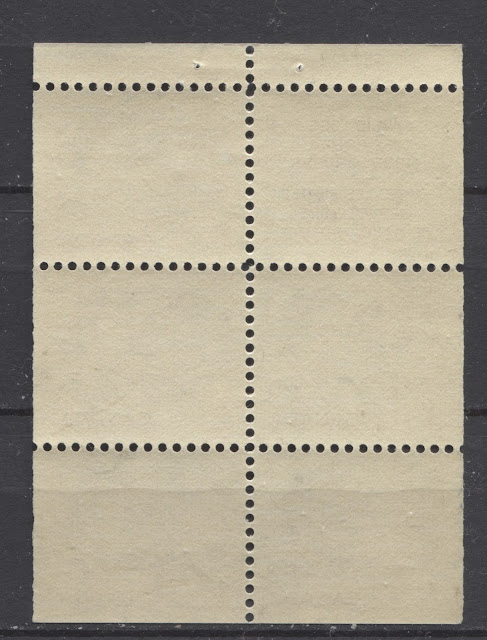 If you look carefully at the above scan, you can just make out the fine vertical striations in the paper than run the length of the stamp.
Neither Unitrade, nor McCann list it, but I have come across an oily paper that is translucent. These stamps came from a booklet that I had, which had clean pristine covers and showed no evidence of having been dropped in oil, or having anything spilled on it. When I opened it up and took out the panes, both 4c and 1c panes were on a paper that was translucent and had an oily appearance like the stamp on the right:

I personally have never seen either the MF or LF papers. I have seen DF-fl paper quite a few times and this paper is generally the better paper. The vast majority of stamps and booklet panes you will encounter will be on DF or NF paper. Generally, the colours under UV will vary from light brown and ivory, to bluish white for the DF papers. NF papers will vary from deep brown to deep violet, and the other papers will vary from light violet to greyish to bluish white.
The pictures below of the few panes that I have show some of these differences: 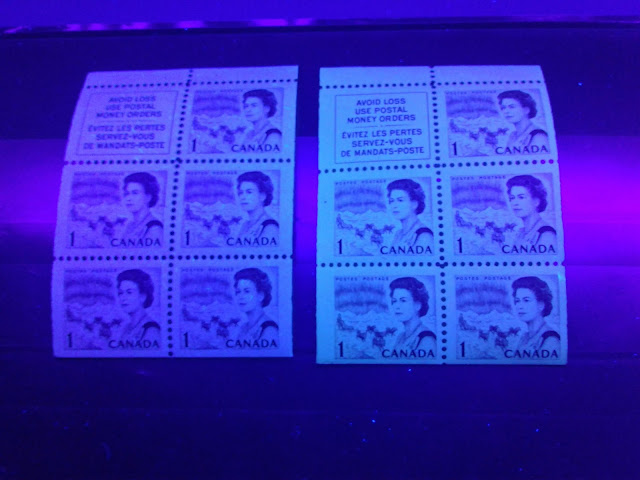 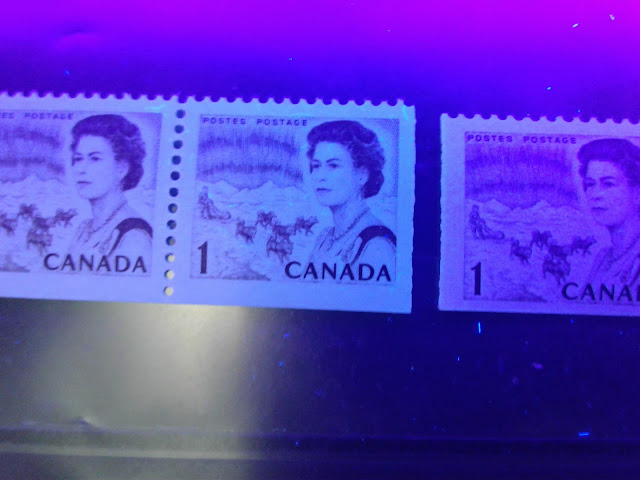 The paper of the left pair in this picture is a light ivory, with very few medium, high fluorescent and hibrite fibres. The paper of the pair on the right is the NF paper in light brown. I have also seen several of the NF papers in deep brown.
So it would seem that the NF paper exists in at least 3 colours under UV: light brown, deep brown and violet. The DF paper exists in light ivory, violet grey and possibly grey and greyish white. I haven't seen the LF papers and MF papers, but I would assume that they appear bluish white only under UV. So my belief is that rather than 6 types of fluorescent paper there are really likely to be 13 or so. If each of those exists in oily and non-oily versions, then there could be as many as 26 different varieties of paper on these.

The shades found on these stamps closely follow the shades seen on the plate 1 and 2 sheet stamps printed before September 1968:

I have not generally seen the reddish browns that appear on the later plate 3, 4 and 5 printings, which tends to suggest that the booklet stamps can be used as points of reference for dating the printings of the sheet stamps. In other words, sheet stamps from plate 1 and 2 in any of the above three shades can be reckoned as having been made before September 1968.
The following scans show these shades: 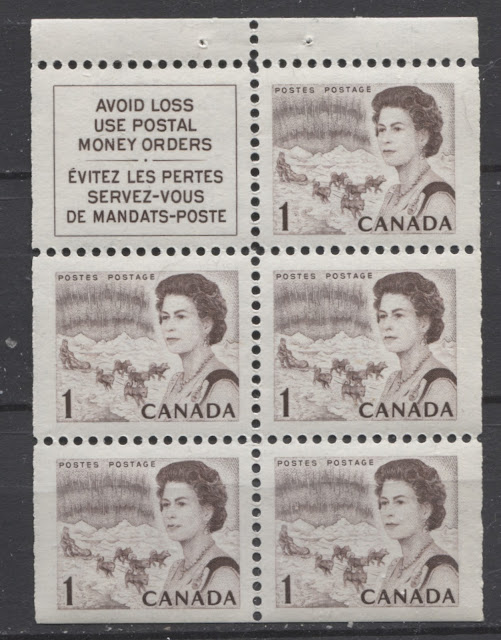 Blackish brown.
I would expect that all three shades can likely be found with all the paper types, so that if there are indeed 26 different paper types, then there could be as many as 26 x 3 = 78 collectible varieties, not taking into account either paper or gum.  Finally, the inks are all non-transformative, as they do not appear fundamentally different when viewed under UV light.

Given that the 1967 commemorative issues exist with all four perforations: 11.85, 11.85 x 11.95, 11.95 and 11.95 x 11.85, one would expect that these stamps should exist with all four perforations. However, all of the singles and booklet panes that I examined were perf 11.85 only. That is consistent with the findings of Julian Goldberg in his study of perforations on these booklets and it may suggest that the 11.95 machines were simply not used to perforate the booklet stamps, even though they were used to perforate the other issues. So for the purposes of this post, I will assume that 11.85 is the only perforation that exists.

The gum on these panes seems to come in only 2 types:

I have not yet found examples with streaky gum, though I am sure that they probably do exist. The scan below shows the first two types: 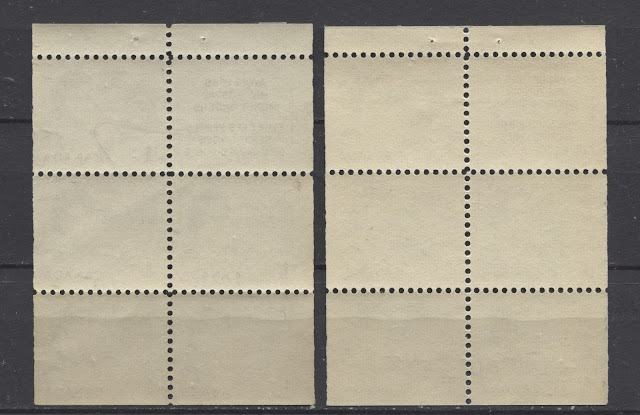 The satin gum is shown on the left pane, while the yellowish cream semi-gloss gum is shown on the right pane.
So, given that there are likely three gum types, but only one perforation, there are very likely to be as many as 78 x 3 - 234 different collectible panes or singles of these stamps. That is quite a lot more scope than many would imagine.
The Perf. 10 BABN Booklet Stamps
These stamps were issued in September and October 1968, first appearing in the new 25c booklets, containing 5 of each of the 1c and 4c stamps. When the postal rates increased in October 1968, new 25c booklets were required, that contained 6c stamps, and these booklets contained a single 1c stamp. The question that would immediately pop to mind for many specialists would be: can the booklet singles that come from each booklet be distinguished? The fortunate answer, due to the layout of the booklet panes is a resounding yes! The stamps from the first 25c booklets all come from the left side of the booklet pale and as such they will have at least one straight edge at the left side. The stamps from the 6c+1c 25c booklets come only from the top right of the pane, and so they will always have one straight edge only at the right.
Papers
The paper used for these stamps does exhibit some physical differences as well as differences in fluorescence. For the first stamps that came from the 4c + 1c booklets, the paper is a creamy horizontal wove paper that under magnification, has a slightly porous appearance. There appear to be two main kinds of paper:
Unfortunately the difference does not readily show up in a scan, so I cannot show it here.
The paper on the stamps that come from the 6c + 1c booklets has a rougher surface texture under magnification and does not appear to have any vertical mesh.
In terms of fluorescence, Unitrade lists dull fluorescent and non-fluorescent with fluorescent fibres, while McCann is similar, but refers to both paper types as dull. I would tend to agree with McCann. The fluorescent fibres tend to be quite bright: generally MF and HF and overall, there is a very sparse to sparse coverage across the stamp. Sometimes though, the fibres are less bright, i.e LF and very few of them to very sparse coverage. The colour of the paper under UV tends to have a violet tinge, through the plain DF paper with no fibres at all tends more towards pure grey.
The picture below shows some of these: 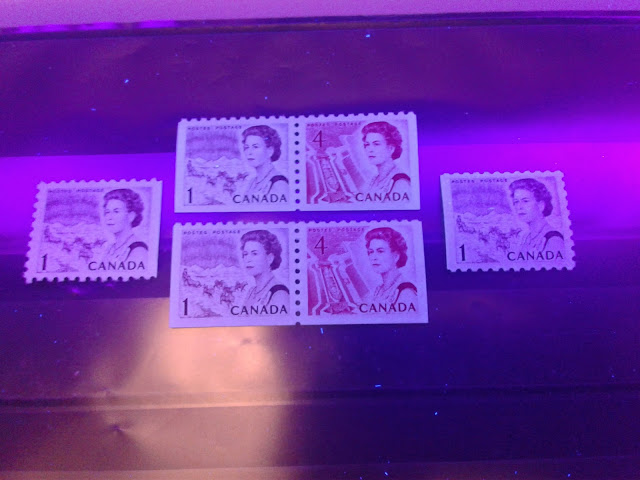 The top pair is the plain DF paper with no fluorescent fibres that has a greyish cast under UV. The stamp on the right is a DF to NF light violet under UV with an overall sparse concentration of MF and HF fibres. The bottom pair is a DF paper with a violet grey cast, and very few low fluorescent fibres. Each of these comes from the 4c +1c booklets, so that it would appear that there are at least three fluorescence levels, and possibly 6 paper types in total for these stamps.

The left hand stamp is from the 6c + 1c booklets and it is a dull fluorescent brownish grey colour under UV. Generally, the DF papers for these stamps seem to be more brownish grey and lack the violet undertone. They also exist with a sparse concentration of dull to low fluorescent fibres. Finally, both McCann and Unitrade list a hibrite paper, that is bluish white, but in my opinion is really more of a high fluorescent, rather than a true hibrite.

The picture below shows these types: 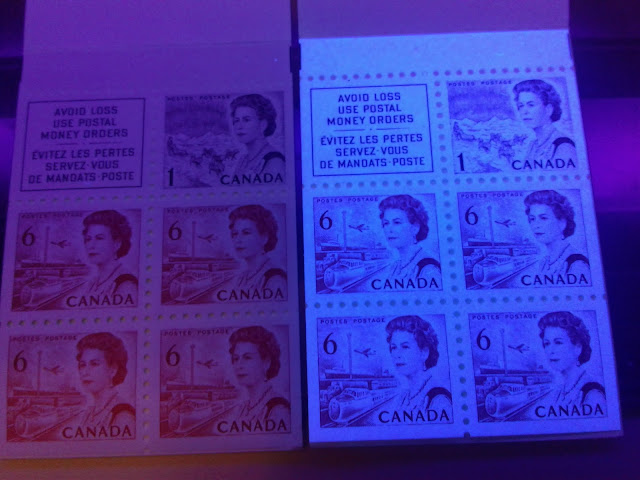 Unitrade lists a low fluorescent paper for these stamps, as does McCann. I do not have an example of it here, but I would imagine that it is bluish white under UV. McCann also lists a dead paper in addition to the HB, LF, DF and DF-fl papers. So it would seem that there are five different papers for these booklets and booklet stamps. 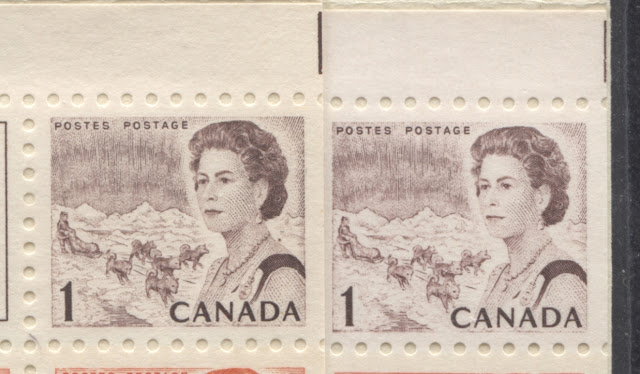 It is difficult to see at first glance, but if you allow your eyes to adjust, the reddish undertone of the left stamp will emerge quite clearly, while the other two are a warm deep brown.
Under UV light all the shades appear merely as deeper versions of themselves, so that the inks used can generally be regarded as non-transformative. On the hibrite panes, the colour almost appears black, rather than brown, and therefore the inks used for these printings are transformative.
Gum
The gum used on these is a smooth creamy dextrose with a semi-gloss sheen. Sometimes the gum appears slightly crackly and smooth, while other times is has very light horiznontal strokes that almost appear to be brush strokes. Finally the colour varies from a pure cream on the 6c + 1c booklets and the 4c + 1c booklets to a yellowish cream on the 4c + 1c booklets only.
The scan below shows these differences quite clearly:

The pure cream gum is shown on the left, while the yellowish cream gum is shown on the right.
Bringing it All Together
For the 4c + 1c booklet stamps we have 6 different paper types, one major shade, and two types of gum, for a total of at least 12 collectible varieties. For the 6c + 1c booklets, we have five paper types, two shades and two types of gum (crackly and smooth cream), for a total of up to 20 collectible varieties.

This is a much shorter post today and concludes my exploration of these first booklet stamps of the 1c. Next week, I will look at the perf. 12.5 x 12 1c BABN stamps that were included with the 25c, 50c, and $1 booklets that were issued from late 1971 onwards. These are much, much more complicated and require a post all on their own.