The introduction of special delivery services in 1898 required the issuance of a new stamp for the prepayment of those services. The fee for special delivery was to be 10c for a letter delivered within the city limits of where it was posted.

So on June 28, the Post Office Department issued a 10c stamp in deep blue green of the following design: 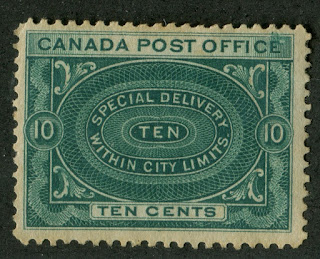 I must confess that I do not know who designed this stamp. There are very few if any reference sources on this issue, which  is odd, because it makes such a good project for research as we shall see. The engraver was probably Charles Skinner, as he engraved all the other issues that were in use during this time. The American Bank Note Company was the printer, and the stamps were printed from two plates. For the stamps printed from plate 1, the sheets were 100 subjects and the sheets were sent to post offices intact. Thus it is possible to obtain intact plate blocks showing the full inscription from plate 1. Plate 2 printings were also 100 subjects, but the sheets were guillotined down the middle for distribution to post offices. Thus was a common practice in the late 1910's and early 1920's, and it suggests that plate 2 dates from around this time.

What makes this issue so interesting is its longevity - 24 years before the next special delivery issue replaced it. Only the 15c Large Queen and the low values of the Small Queens have a longer period of use than this. It was not a heavily used stamp, as this would have been an expensive luxury at the time and would only have been used in cases where it was important for the letter to reach the recipient on the same day. Thus only 3,667,500 stamps were issued during the entire 24 years. But these stamps were spread out over a very large number of printings, which I do not think have necessarily all been identified and studied. This provides a budding specialist with a fantastic research project, as this stamp was issued over three reigns: Victoria, Edward VII and George V.

The main point of interest is trying to identify all the printings of this stamp, but that is done mainly by studying the various attributes, which are points of interest in their own right:

As usual, I will discuss each of these in more detail.

The colour of the green varied greatly over the life of the stamp, but it followed the same general pattern as the 1c green stamps of the period. So you can use the general shades of the 1c Numeral, 1c Edward VII and 1c Admiral to guide your identification of the printings. However, some shades are repeated on different sets, so to identify the printings with the right period, one needs to consider paper and gum as well. Matching mint stamps with a collection of dated used stamps, will, I think be the only way to attribute a particular shade to a specific time period.

The shades that I have seen so far on this stamp are: 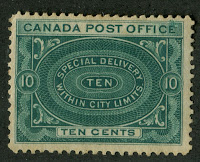 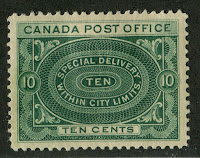 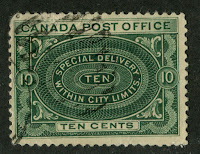 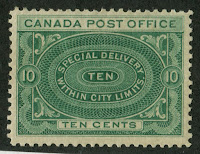 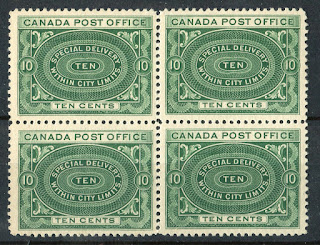 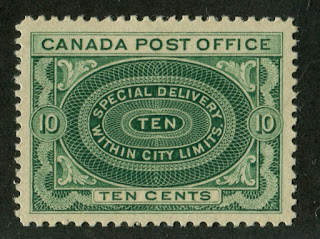 Attributing the shades to a period is tricky for the reasons that I explained above, though some generalizations can be made.

However, these are very rough suppositions that would need to be supported by years of diligent research using hundreds or thousands of mint and used stamps.

The stamps are found on a variety of vertical and horizontal wove papers, that vary in thickness from 0.003" to 0.0045". Some of the papers are thick and fibrous, while others are thin and stout. 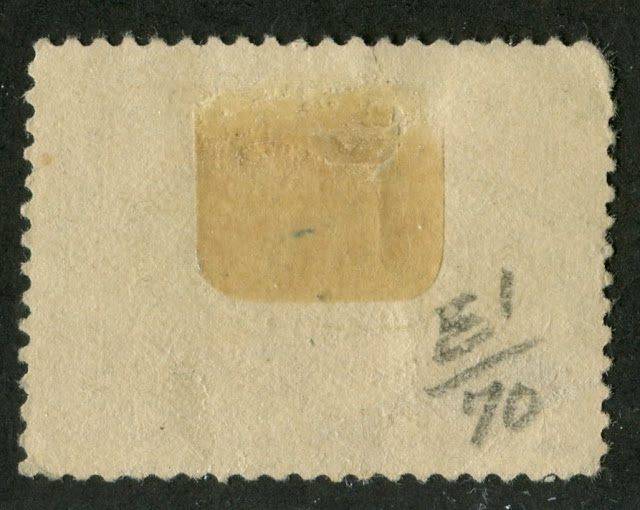 This is a thick, fibrous horizontal wove paper measuring 0.0035" thick. 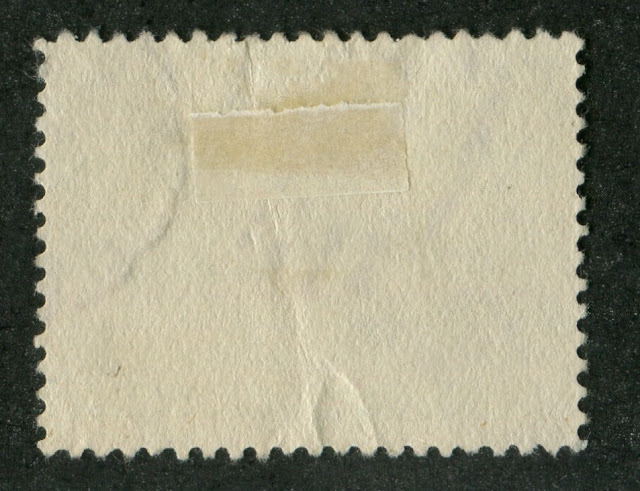 This is a medium vertical wove that measures 0.004" thick. 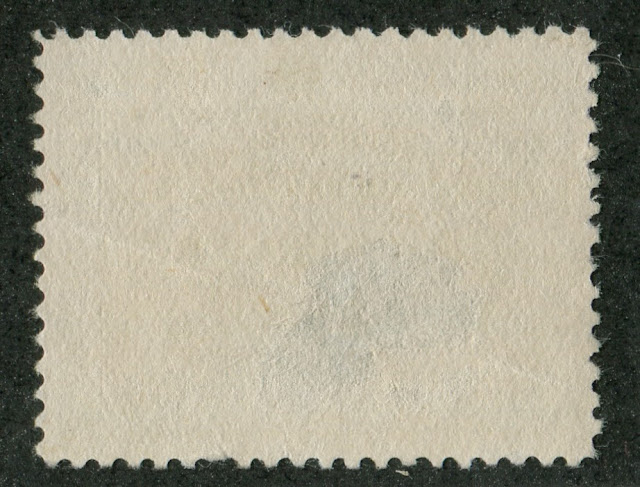 This is a similar vertical wove paper, but whiter and slightly thinner, at 0.0035" thick.
In studying these, it would be useful to form a reference collection of used 1c Numerals, 1c Edward VII stamps and 1c Admirals that you could compare and match the papers to. This would enable you to attribute them to a time period.
Gum Varieties 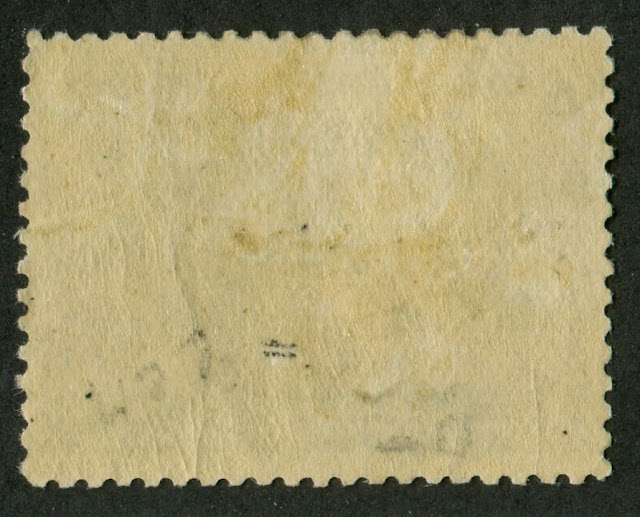 This smooth, somewhat crackly cream coloured gum is often found on the Edward VII and 1908 Quebec Tercentenary Issues. So this stamp is likely from the Edward VII period. 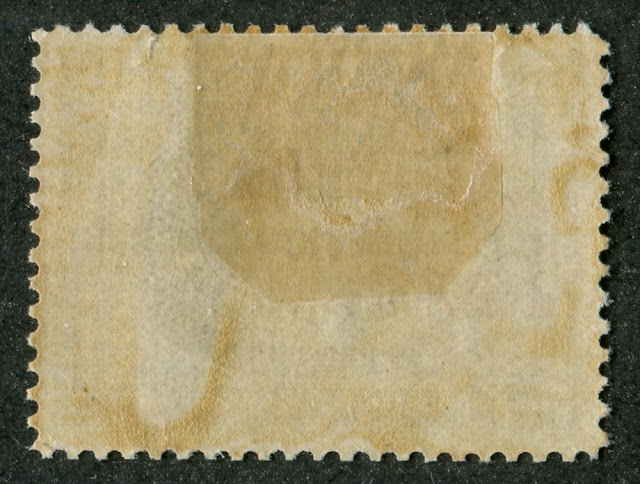 This disturbed brownish cream gum is similar to that found on some of the Numeral stamps. So this is likely from the Queen Victorian period. 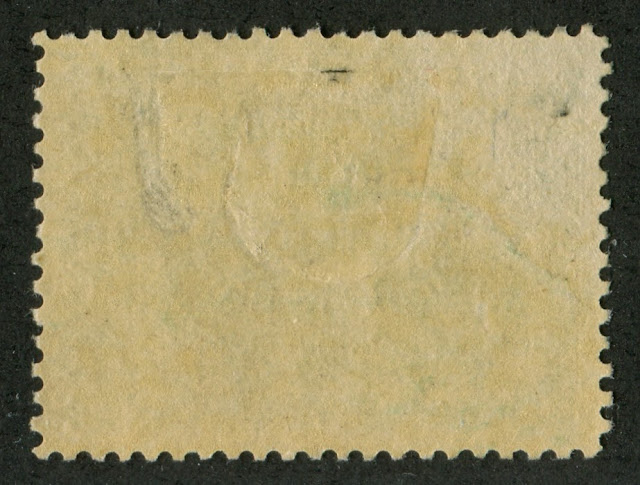 This smooth creamy gum is also typical of the Numeral issue, and is likely from the Victorian period, although it could also be from the early Edward VII period as well. 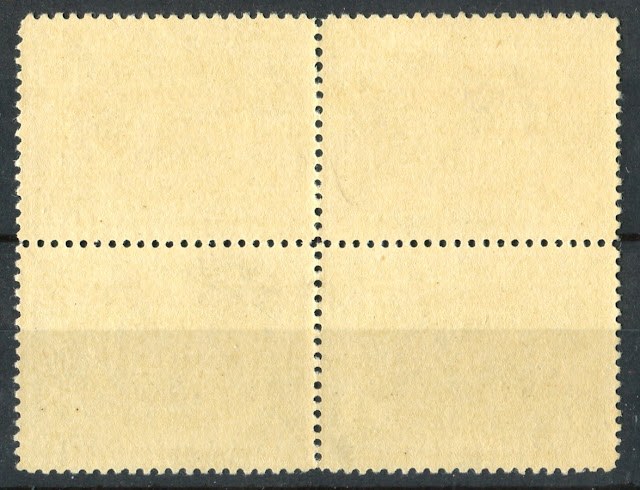 This very shiny, coffee cream coloured gum is very typical of the wet printings of the Admiral stamps made in the early 1920's. This is definitely from the late Admiral period. 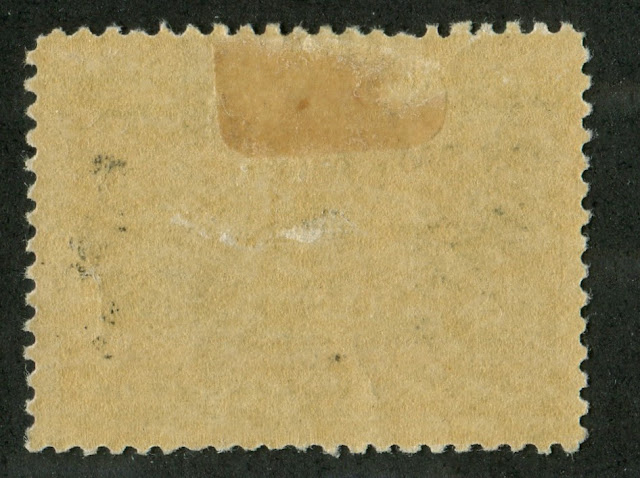 This shiny deep cream coloured gum is found usually on the Admirals from between about 1913 to 1917. It is not as shiny, yellowish and thick as the above gum. The 1920's gum has a sponged or rolled on appearance, like what you would see if you painted a wall with a roller. This gum doesn't have that textured appearance, being more or less completely smooth. 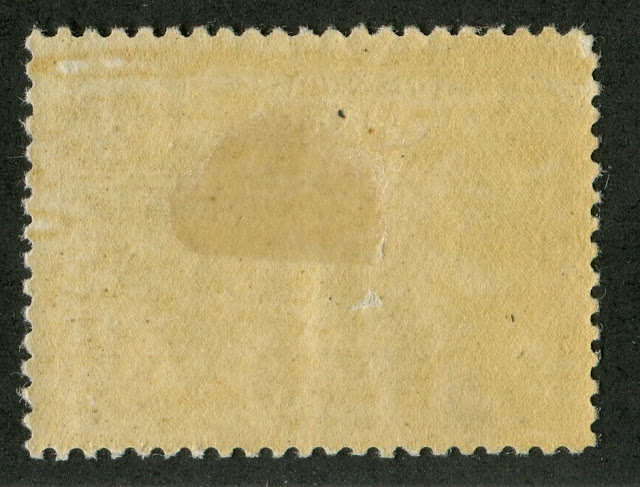 This gum is similar to the 1920's gum, but it is not as thick or dark in colour. It is usually found in the Edward VII period.
Of course, one always has to beware of regummed stamps, not so much because of their value, but simply to avoid being led astray by a new type of gum that actually has nothing to do with the issue.
Plate Varieties
The original printings of these stamps show prominent cross hatched shading around the 10's in the value tablets that form a shadow effect on the numbers. Later printings from the Admiral period are found with this shading almost completely missing. These are known to collectors as the "No shading in value tablet" varieties. They  are listed in Unitrade at a premium. 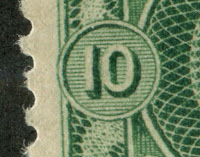 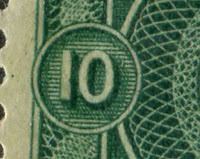 
Unitrade does not list any re-entries for this stamp, but I have discovered one very spectacular re-entry. It was on a creased mint stamp from what appears to be a Victoria period printing. Most of the middle lettering and all of the top lettering, as well as the upper vertical framelines show distinct doubling. The doubling in "Canada Postage" is obvious and visible without a loupe. Pictures of this re-entry are shown below: 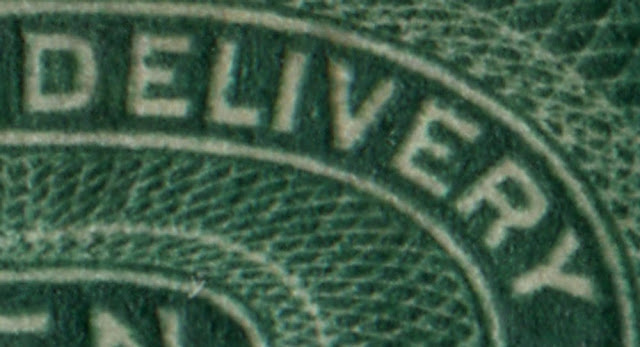 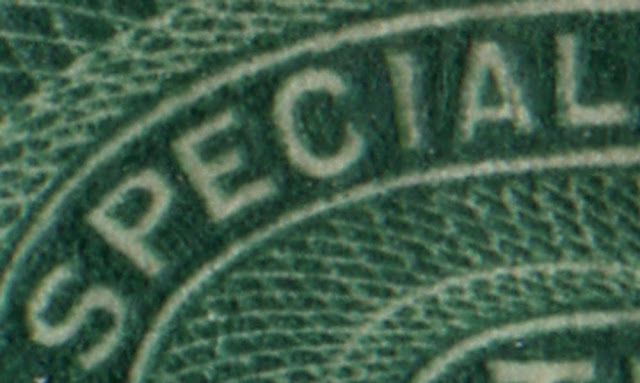 The doubling consists of the shadows inside the letters. On regular stamps, the letters are sharp and clean with no shadows. The framelines are sharp, with no shadows.
Multiples and Plate Blocks
Given the nature of the special delivery fee, I would not expect to ever find used multiples of this stamp. However, I can envision a situation where this stamp was used as a regular 10c stamp, which would open up the possibility of used blocks. Such instances should be very rare though and if you do encounter a used block, I would snap it up quickly as it would be a very desirable item.
Any multiple of this stamp is scarce, especially if it is well centered and NH. The dark yellow green block above is about as nice as they come, and this is one of my prized items in my stock.  Plate blocks from plate 1 consist of six stamps and in very fine hinged condition will set you back about $1,000. Plate 2 blocks consist of blocks of 4 stamps and will not contain the full inscription due to the way in which the stamps were guillotined. A complete collection would include a block from each of the right and left panes. To my knowledge, no collection has been formed of all the possible plate blocks from the various printings, and such a collection, while not cheap, would be much less expensive compared to other 10 cent stamps of this period. It would be very doable for someone with $300-$400 per month to spend on their hobby.
Covers and Cancellations
Because this is a special delivery stamp, a typical cover should have it used in conjunction with other stamps that were paying the normal postage. However, as I said above, there will probably be rare instances where all of the postage plus special delivery was paid with just these stamps. These would be of great interest. Most of the types of covers such as advertising covers, found during this period should exist with this stamp as well. First day covers should be very rare to non-existent, as the earliest documented use of this stamp is July 2, 4 days after the stamp was issued.
The size of the stamp makes it ideal for the collection of CDS cancellations, though most of the time what you are more likely to find are barred grid/CDS duplex cancels, or numeric bootheel duplex cancels. Postal regulations stated that the stamp was supposed to be cancelled with the barred grid leaving the CDS on the envelope. So it is only in odd cases that you will find the CDS on the actual stamp. I have seen triple circle orb CDS's on these quite often. I have not seen cork cancellations or fancy cancels, though I'm sure that a few probably do exist from the late Victorian period.
Dated examples will prove to be invaluable for classifying the different printings as in the example below: 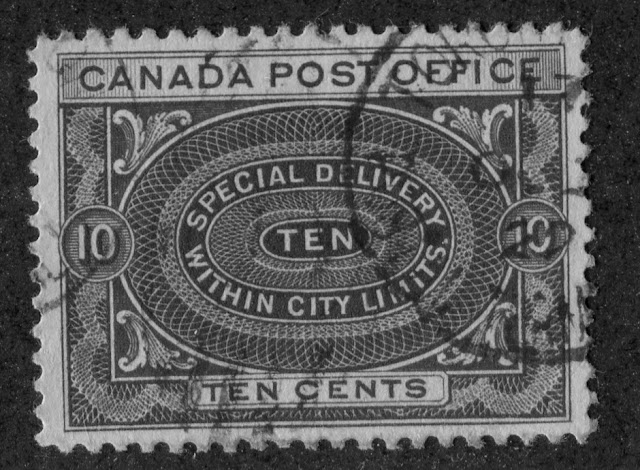 This is a deep yellow green stamp similar to the one in the block above. As you can see, it is cancelled by a Toronto Barred Grid CDS duplex. Fortunately, the date is visible as October 1922, which is a month after the issue was replaced. On its own, it suggests that the deep yellow green stamps are from the last printing, though many more examples would have to be acquired with similar dates to be certain of this.
Proof Material
Ron Brigham's collection included sunken die proofs in both the issued colour as well as a trial colour die proof in orange vermilion. I do not know if there are other colours that exist as well, but they would be worth searching for. 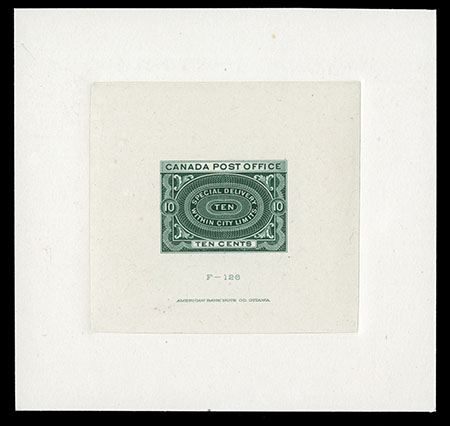 In addition to the above 73 plate proofs in the issued colour printed on India paper were sold at the 1990 American Bank Note Company archive sale. These are valued in Unitrade at $1,000 each.