As stated in my previous post, the Maple Leaf Issue had only been in use for a few months, when French speaking Canadians began to complain about the fact that they could not read the inscriptions. Thus a decision was made to replace the set, with a similar one, showing actual numerals in the corners rather than maple leaves. The replacement was not all done at once, but rather in stages, as new values were either required due to changes in postal rates, or as existing supplies of the Maple Leaf issue were exhausted. The stamps from this set appeared in the following order:
June 17, 1898 - the 1c green and 3c carmine
August 27, 1898 - the 6c brown
September 2, 1898 (earliest known date) - 2c purple
September 6, 1898 - the 1/2c black
September 24, 1898 -the 8c orange
November 5, 1898 - the 10c brown violet
July 3, 1899 - the 5c blue on bluish
August 22,1899 (earliest known date) - 2c carmine
December 24, 1900 - the 20c olive green
December 29, 1902 - the 7c olive yellow
This set was in use for almost five years until the Edward VII issue replaced it on July 1, 1903. Given that Queen Victoria died on January 24, 1901, it took the post office department almost a year and a half to replace the set after her death. As a matter of fact, the 7c olive yellow is actually solidly an Edward VII era stamp, even though it bears the Queen's portrait.
The 2c carmine and 7c olive yellow were issued because of the reduction in postage rates for both local and US letters from 3c down to 2c that took effect on January 1, 1899. The registration fee at this time for all letters was 5c, so the 7c value was needed for registered letters after the rate reduction. But it was issued almost 3 years later than needed.
The 20c olive green replaced the 20c vermilion Widow's Weeds, presumably because the post office department wanted to save money by streamlining printing and reducing the size of the stamps. It appears that some consideration was also given to replacing the 15c Large Queen and 50c blue Widow's weeds, as 15c and 50c values were prepared in essay form, using the exact same designs as the issued stamps. For some unknown reason it was decided not to issue either the 15c or 50c values. In the case of the 15c, the reason was likely due to changes in postage rates, and the perception that it was no longer needed. But in the case of the 50c the reason remains unclear. The decision not to issue values higher than 50c continued and would stand until 1923, when the $1 Admiral was issued.
The points of interest with this issue are much the same as the Maple Leaf Issue, except that the scope is greater: there are more re-entries and plate flaws to be found and more shades, as well as paper varieties. Some of the stamps are surprisingly scarce, such as the 6c, 8c and 20c, while the low values are ultra common in used condition. Thus it is possible for a collector of limited means to have a lot of fun with the low values in either mint or used condition, while waiting for the means to pursue the most expensive material. A wealthy collector can spend a great deal of money on this set, especially if plate blocks are desired, although not nearly as much as the Jubilee Issue.
The Stamps and Quantities Issued 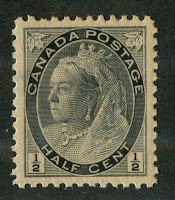 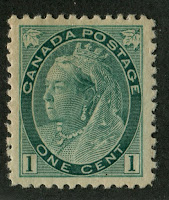 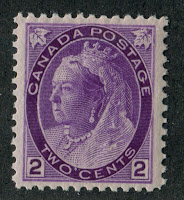 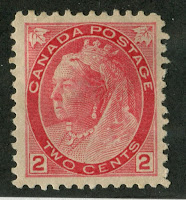 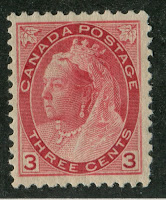 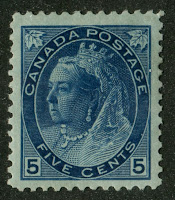 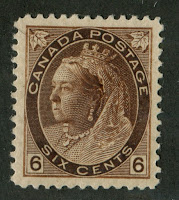 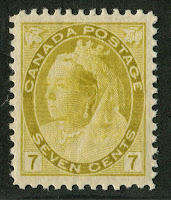 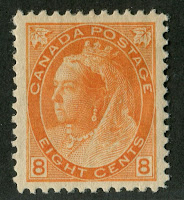 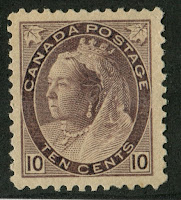 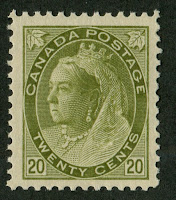 You have to look very carefully to see these varieties, but if you look carefully you see ink in the white part of the lettering where there shouldn't be any and then you will notice the extra frameline running across the entire stamp.
Plate flaws consist mostly of marks resulting from damage to the plate, like the "C" flaw on the 2c purple, or the hooked 2 on the 2c carmine. However an  engraver's slip can be found on the 20c. Actually I have seen two on this stamp. The one that is NOT listed in Unitrade is shown below: 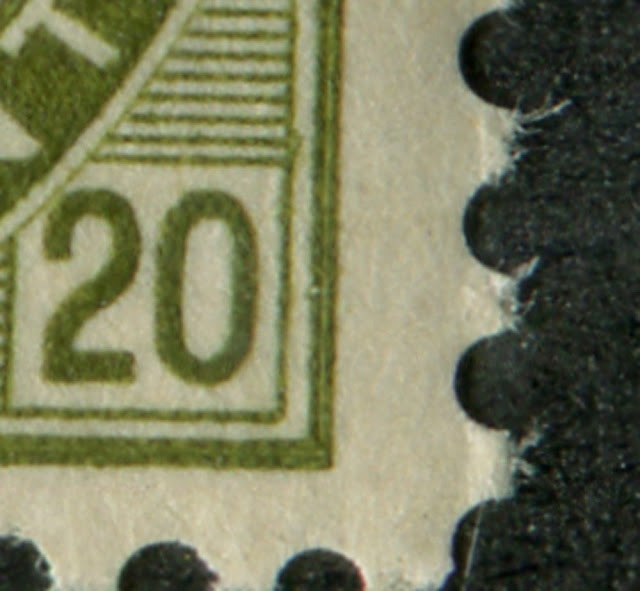 You can just make out this flaw as a diagonal line protruding from the upper right corner of the right numeral box.
Despite the amount of study that has been done on these stamps, I am pretty confident that there are still a lot of varieties waiting to be discovered. None of the varieties I have mentioned here were known 20 years ago.
Plate Multiples and Other Multiples
Used multiples of every value other than the 1/2c and 1c are all scarce to rare, particularly on values above the 3c. You could put together a very desirable group of these multiples by acquiring them from sellers who do not appreciate their significance.
Plate blocks of 8 exist of all values in this issue and for the low values many plates were used to print the stamps. So you could easily spend a lifetime seeking examples of them all, not to mention spending a lot of money. Expect to pay anywhere from 50-100% more than what the individual stamps in the block would cost you. 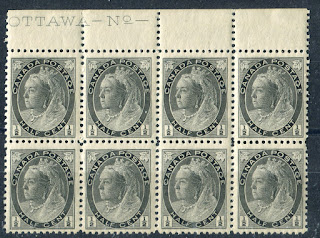 Postal History
As with the previous issues, advertising covers continued in their popularity so that very attractive collections of the low-value drop, US and local covers can be formed.
The 1/2c black was issued to pay the printed matter rate, but covers rated correctly with a single stamp are rare. Below is a postcard sent to Algeria in 1909 where this stamp has been used to pay the printed matter rate for postcards that were sent thus in a mass mailing. 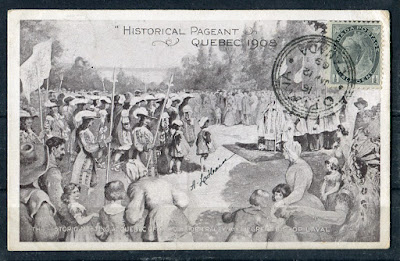 The 1c, 2c, 3c and 5c, 7c and 8c are all relatively easy to find on cover. However the 6c, 10c and 20c are all rare. The 6c did not correspond to any rate except for the double weight local letter rate prior to January 1, 1899. Since most local letters would have weighed less than an ounce, this value would not have seen much use. The 10c and 20c stamps were mostly used on parcels and bulk mailing receipts or tags rather than covers, but occasionally one does come across them.
The rate reduction from 3c to 2c that took effect on January 1, 1899 creates a situation where it is possible to find covers that are incorrectly rated and where this was not caught by the authorities.
Destinations other than the US and the UK are all scarce and highly desirable, although my feeling is that Germany is the next most common one. A real rewarding challenge would be to seek out these foreign usages, some of which will be very rare. For example there are probably fewer than 10 examples of mail to Algeria from the time period of the above card.
Cancellations
Again this issue affords the cancel collector with unparalleled opportunity to collect tens of thousands of CDS town cancellations on the low values. A greater challenge is to look for them on values that were not usually cancelled with CDS's like the 5c, 6c, 7c, 8c, 10c, and 20c. Most of the 5c stamps and 6c stamps are cancelled with barred grids. The 7c and 8c stamps are most commonly found with the heavy oval black "R" cancels, as these stamps were primarily intended for use on registered letters. Finally the 10c and 20c are most commonly found either roller or smudge cancelled.
Corks are very occasionally found on the low values, though not that often.
Squared circles are found primarily on the 1c, 2c and 3c values and many hundreds can be collected.
Booklets and Booklet Panes
Canada's first booklets were issued during the life of this series. Very few panes or complete booklets have survived intact. The only value issued was a pane of six 2c carmine die 2 that sold for a 1c premium over face value. 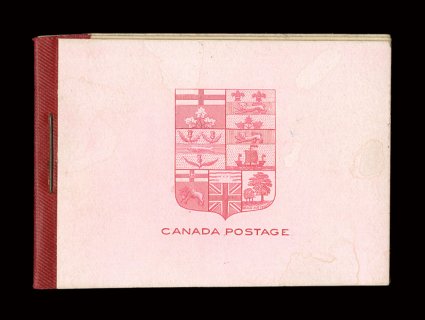 This booklet was only issued in English format and has the distinction of also being the first booklet issued for the entire British Commonwealth. These booklets sell for thousands of dollars,  with an intact pane of 6 still being worth over $1,000. Even used singles from these panes are worth more than $10 per stamp compared to just pennies for the regular sheet stamps.
Stitch Watermarks
A stitch watermark occurs during the paper making process when the reems of paper are stitched together. It resembles a line of stitching running either horizontally or vertically. Because it only occurs very infrequently in the process and due to the low survival rate of printed stamps, these markings are extremely rare and have only begun to be discovered by philatelists in recent years. It is through the study of large hoards of used stamps that these types of varieties have been discovered. Unitrade lists a few of them for hundreds of dollars each. Undoubtedly they could potentially exist on all values and in mint condition as well. So check all your stamps carefully.
The illustration below shows a horizontal stitch watermark on a 1/2c Small Queen

Postal Stationery
During this period virtually every form of postal stationery that is in use today was in use:
Stamped envelopes were issued using an embossed relief portrait of the old Queen in a 3c red, and then in 1898, a portrait of the young Queen was used for 1c green, 2c violet and  2c red values. In mint condition these are fairly common, but some used envelopes are scarce, especially those that have been uprated to foreign destinations. 2c on 3c surcharges are found on the 3c envelopes as for the issued stamps as discussed below.
Postcards, letter cards and post bands continued to use the 1c green design for the Maple Leaf issue, and no replacement cards or post bands were issued for the new design. The 3c letter cards were also surcharged down to 2c in 1899 when the rates dropped. Some of these surcharges are quite scarce, especially in used condition.
The 2c on 3c Surcharges and Port Hood Provisionals
The reduction in postage rates in 1899 created a huge run on 2c stamps that was so unprecedented that the post office ran out of 2c stamps. The rate reduction and the standard UPU colours (the Universal Postal Union had a standard colour scheme for stamps so that foreign postal clerks would know whether sufficient postage was paid) meant that purple was no longer a suitable colour for the 2c stamp. While the 2c carmine was being printed it was decided that the 3c remainders from both the preceding Maple Leaf issue and this issue would be used up by overprinting them "2 Cents: as shown on the block below.

These stamps can be found in a variety of shades, with numerous re-entries and several varieties of overprint have been identified, including a narrow spacing variety between the overprint on adjacent stamps of 4mm versus the normal 7mm. Inverted overprints have been seen as well, though experts question their authenticity.
Finally, perhaps the rarest items of all are the Port Hood Provisionals. They were not officially authorized, but came about when the postmaster of a little town called Port Hood in Nova Scotia decided to take 3c stamps and make his own 2c and 1c stamps. For the 2c he cut 2/3rds of a 3c stamp and used a violet rubber handstamp to stamp a "2" over the "3". For the 1c, he took 1/3 of a stamp and handstamped a "1". They are exceedingly rare. A cover that recently sold at a Spink sale is shown below. 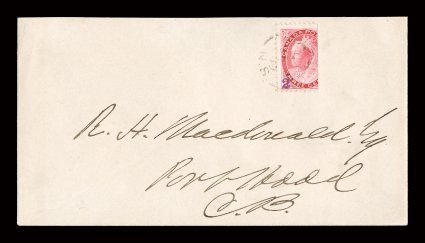