This attractive and unassuming set of 8 stamps represents another opportunity for a collector of modest means to form a specialized collection of Queen Victorian material. The set, like the previous Cabot Issue was printed by the American Bank Note Company and the imprint appears at the base of each stamp just like the previous set.
The stamps were issued between 1897 and 1901, with the original release in 1897 comprising the 1/2c olive, 1c carmine rose, the 2c orange and the 3c red-orange only. These stamps were generally intended for the local drop letter and local letter rates. For higher rate mail, there were still adequate stocks of the Cabot issue on hand until 1899 when the 5c blue was issued. The colours of the 1c and 2c were changed to green and vermilion respectively in 1898. The last value to be issued was the 4c violet in 1901.
One of the things that is interesting about this set is that it portrays members of the royal family long before they were commonly seen on stamps, and at unusual ages. For example, the 1/2c olive, is to my knowledge, the only stamp in the entire Empire that shows the future King Edward VII as a baby. Queen Alexandra (Edward VII's wife) does not appear on very many stamps at all. In fact I can't think of a single Commonwealth country other than Newfoundland and Canada that show her portrait. Canada only shows her on the 2c Quebec Tercentenary. The 4c and 5c show the future Queen Mary and King George V a good 12 years before George V became king, and again to the best of my knowledge, Mary only appears on Canadian and Newfoundland stamps.
The Unitrade catalogue does not list quantities printed, so I am unable to state them here. I would note that the values up to the 2c are all fairly common in mint condition, with the higher values being scarce. Used stamps are very readily attainable for all values.
The Designs 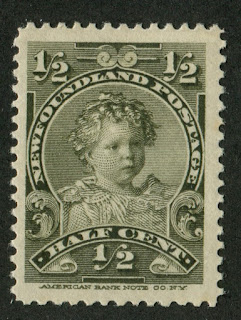 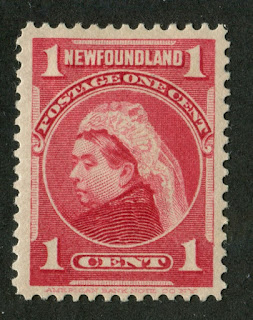 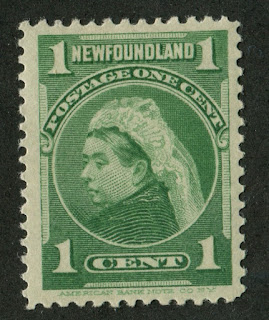 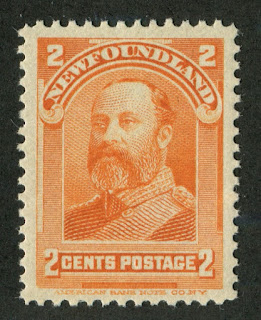 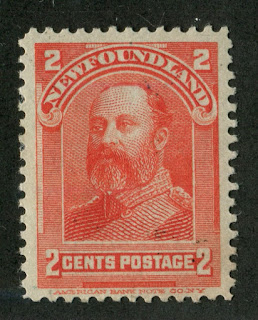 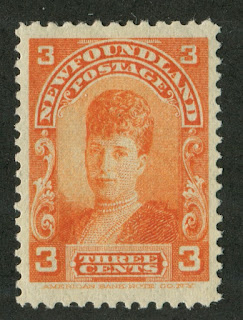 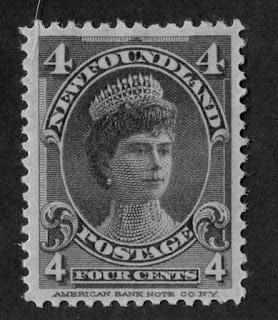 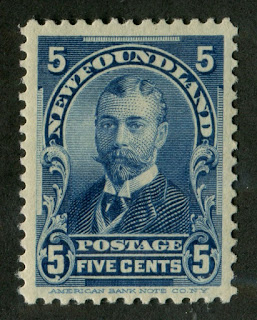 5c Dark Blue - Duke of York (George V)
Main Points of Interest
Despite being a relatively small set, it was in use for 13 years, until the John Guy issue replaced it in 1910. This was a long enough time period to result in many varieties and avenues along which to specialize:
1. Shade Varieties
2. Re-Entries and misplaced entries
3. Paper varieties
4. Imperforate and partially imperforate varieties
5. Cancels and postal history
6. Proof material
7. Plate blocks
8. Specimen overprints
As you can see, that is quite a number of directions that you can head in. Even better is the fact that the most expensive items in this issue, are little more than $1,000, and there are very few of them. The used stamps are very inexpensive. So with patience, a collector of relatively modest means can form a very beautiful collection.
Shade Varieties
I have seen at least subtle shade varieties on all the values except for the 2c stamps. The widest range of shades is to be found on the 1c green and the 3c orange, and on these two stamps, several of them are quite striking. The 1c green can be found in a green, yellow green and a very deep green, while the 3c varies from dull orange, to orange through to deep red-orange. Shades on the 1/2c, 1c carmine rose, 4c violet and 5c dark blue are more subtle. On the 4c, I have seen some violets that are slightly brighter than others and on the 5c, I have seen dark blues that have a duller cast than the normal dark blue.
Re-Entries and Misplaced Entries
Due to the long period of use, I would expect that there would be several states of each plate and that the plates would have been re-entered at least once, resulting in several possible re-entries and misplaced entries. Unitrade currently lists misplaced entries on both 2c colours and major re-entries on both 2c colours, the 3c and the 5c. None of these were listed until very recently, and I am confident that many more will be discovered as this set receives more dedicated study. The availability of used stamps for very nominal amounts makes this a very promising field of study indeed. I have found two very interesting varieties on the 1c carmine rose, neither of which is listed in Unitrade: 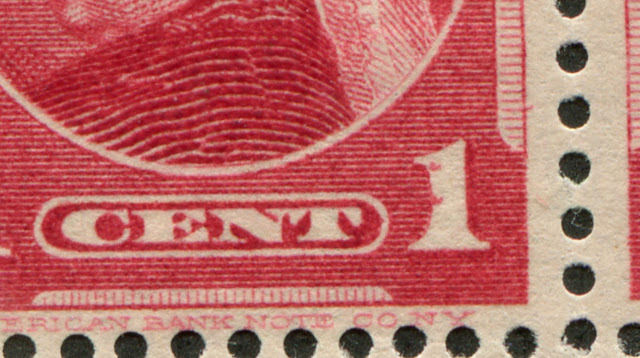 The first of these consists of a misplaced entry in which two spherical ornaments appear in the right numeral. What is curious about this is that there is no design either from this set or any other of Newfoundland that incorporates spheres of this size. So it is a real mystery where this comes from. I can only surmise that is it is from accidental application of a transfer roller that was intended for an issue that the ABN was printing for a different country at around this time.


So there you have it. In a nutshell, this is a perfect set for a specialist who has $300-$400 to spend at a time on their hobby because it means that for any given purchase they can acquire most items from this issue and anything really scarce can be saved up for over a less than 1 year period. It will require a fair amount of patience as the plate blocks, specimens, proofs and imperfs are not widely available and only only come up for sale occasionally. You would need to watch all the major auctions every month if you wanted to make sure that you didn’t miss out. On the other hand you likely won’t be overwhelmed by a lot of material coming on to the market at once, so if you are on a budget, it is a very manageable set. If you have less to spend, it is still a good set, as you can focus your energies on re-entries, basic shades and papers, and local postal history. Those three areas could keep you busy for years. If you are a very wealthy collector, you may not find this issue to be a challenge for very long, but then again, you could combine it with the Cabot issue and together, these sets would be quite a worthy challenge.