There were three separate rates at this time for registration:

The 8c rate was very short lived, lasting only until the end of January 1, 1878, when the rate to the UK was decreased to 5 cents. In 1889, the domestic registration fee was increased from 2 cents to 5 cents. The postal regulations were relaxed somewhat, in order to use up stocks of the 2c, so that as long as a letter bore at least one 2c registered stamp, the remaining 3c could be paid with either regular stamps or a combination of registered stamps and postage stamps.

There were thus three stamps designed and printed by the British American Bank Note Company: 125,000 issued in 2 printings.
I do not know who designed these stamps. But I am fairly sure that they would have been engraved by Henry Earle Sr. as it was he who engraved the Small Queens, which were in use at the same time as these stamps. They were printed in panes of 50, as I have seen full sheets offered for sale in recent years, though they are very rare. Indeed this is the subject of an amusing story involving myself, which I will get to later on.

The points of interest with these stamps are much the same as the Small Queens, as the stamps were printed both in Montreal and Ottawa, and there is a wide variety of papers and shades. The appeal of this set is is ts manageability: the 2c and 5c values are cheap and plentiful in used condition so that a collector can have a lot of fun with them, while they seek out the better varieties. The wealthy collector can spend a very large sum on the rare multiples and postal history, not to mention the imperfs and proof material.

The main points of interest are:

As always, I will discuss each of these in more detail.

The 2c and the 5c stamp  give the best variety of shades with the following easily identifiable:

Some examples of the different shades are illustrated below:

Some examples of the 5c shades are as follows:

Examples of the two shades are thus shown:

Dull blue
Paper Varieties
The stamps of this issue are found on a very wide variety of papers, perhaps a greater variety than the Small Queens. There are horizontal and vertical wove papers that vary in quality from a medium stout wove paper with clear mesh, to a thin, paper that has little to no discernible mesh. Unlike the Small Queens, the poor quality newsprint-like paper that is often found on the second Ottawa printings is not often found on these stamps. Generally the paper varies in thickness from 0.0025" to 0.0035". On mint stamps, with the gum, it can
Some examples of the different papers that can be found are shown below:

Stout vertical wove paper with no distinct mesh. This type is found on the early Montreal printings.

Weak and incomplete framelines along the top and bottom of the design occur frequently on the stamps of this issue, and are not that special. However, there are major re-entries to be found on both the 2c and 5c, both of which are valuable. On the 2c, the doubling affects the right "2", the right "two cents", "Red"of "registered", "amp"of "stamp", "ana" of  "Canada" and the left "two cents". On the 5c, the "N"of "Canada", the "S" of "Registered", the "ER" of letter show distinct doubling. There are many more re-entries than just these. Ralph Trimble's website lists and illustrates all of the better known ones. You can access that site via the following link:

Minor re-entries usually involve doubling or tripling of the left or right framelines.

On the 2c, two major plate flaws are the burr at the upper right corner and the burr to the right of the "T" of "Cents". These burr flaws consist of a protrusion of the orange colour into the white space of the outer framelines. There is also what is known as an "apostrophe" flaw, which consists of a similar burr located in the margin just above the "C" of Canada. The 5c can be found with the right outer frameline wholly or partially missing. In addition, this stamp can also be found with a misplaced entry, in which a portion of the value tablet can be found repeated inside the "F" of the left "five"

The 2c cent is known imperforate, with only one vermilion pair being recorded. In addition to this, used singles with the bottom margin imperforate are known, as well as imperforate vertically. All of these varieties are rare.  These stamps are known to exist with very large margins, so one has to be on their guard for singles that have been cut down to resemble imperforate stamps or partially imperforate varieties. Generally, as long as the imperforate margins are half or more of the width between subjects on the plate, you can be pretty confident that you have a genuine example. If the margins are very small all around, then chances of it being a trimmed example are quite high.

Mis-Perforated Varieties and Other Freaks

Some of the stamps can also be found with perforations running at weird angles. Don Waters, a member of one of my Facebook groups sent me this scan of a used 5c stamp in his collection:

Pre-printing paper creases are found on these stamps. I have only seen them so far on the 5c, but I am sure they can also be found on the 2c and possibly the 8c. However, the low print quantity for the 8c may well mean that there are no such varieties for that value.

I have seen complete sheets of all three stamps. The Ron Brigham sale held recently, had a complete sheet of 50 of the 8c value. I viewed complete sheets of the 2c and 5c at a Robert A Lee Auction. Much to my horror and great embarrassment, one of the sheets of 50 became two blocks of 25 while I was examining them! Fortunately for me Robert had a very relaxed attitude. On seeing my facial expression, he said "Its okay. These are very fragile sheets. They were bound to do this sooner or later."

Plate blocks and pairs can be collected that show the very attractive value counters and plate inscriptions as shown below:


The plate inscription "British American Bank Note Company Montreal" appears in the side margins reading downwards between the 4th and 7th stamps down on each side of the sheet. It also appears in the horizontal margins between stamps 2 through 4.
The value counter appears in words right above the first stamp, and on the other side of the sheet just above the 5th horizontal stamp, there is a  numeral for the value.
Occasionally, one can also find the guillotine guide lines in the top margins, as well as the pane markings "A" in the top margin, or "B" in the bottom margin.
Postal History
A wide variety of covers can be collected for this issue. There are several factors that contribute the the interest level of postal history from this set. One of them is the changes in regulations that allowed for the use of mixed frankings to pay the registration fees. An interesting project would be trying to collect all the different possible combinations that can be found between 1889 and 1893 when the registration rates changed, as well as before. The 8c value properly used on cover to pay the registration fee to the UK is a great rarity and can fetch upwards of $20,000. The cover below was sold by Robert A Siegel in May 2014 for $17,500 US before buyer's premium.
Because registered mail contained important documents, usually of a commercial nature, it is possible to collect some very historically significant covers. The key is to pay attention to the dates, the names of the addressees and the cancellations. The cover below was sent entirely within Manitoulin Island in 1877 and took 2 weeks to travel under 100km! 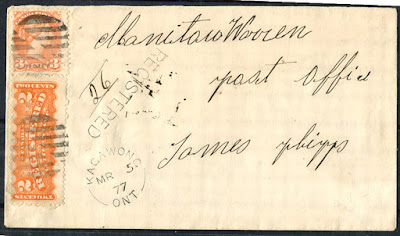 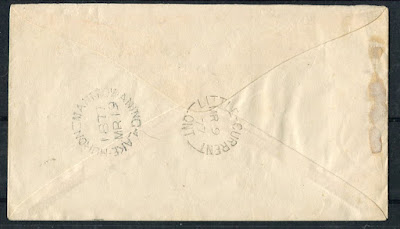 Manitoulin Island is an island located in Lake Huron (in Ontario). It is roughly 1,000 square miles and was not opened for non-native settlement until 1862. It had a population of around 12,000 in 2012.
The following illustration shows the types of covers that can be found for this issue:
Cancellations
A wide variety of cancels can be found on these stamps including:
1. The registration number of the letter in pen.
2. Straight line "Registered"
3. Various fancy corks.
4. Heavy black "R" in black oval.
5. CDS town cancels.
6. Split ring town cancels
7. Target and bulls eye cancels
8. Various barred grids
9. All the above in colour

Die proofs exist of all the stamps in the issued colours, and various others, though they are so rare that I do not know what colours exist. A search in Google did not turn up anything sold in recent years.

Plate proofs of the stamps exist printed on India paper and mounted to card. These too are very rare.

Some stamps were also overprinted "specimen" for distribution to member countries of the Universal Postal Union. I have only ever seen examples of the 2c and 5c, overprinted in small, sans-serif letters. These must also be very rare, as specimens usually are, since there are generally only as many produced as member nations.

The gum on the early Montreal printings is dull and appears streaky and unevenly applied as if by brush. Inexperienced collectors can mistake these for no gum or regummed stamps. They are not though. In fact the 8c value only comes with this type of gum when original, as it was only issued in 1876-1877. So if you find examples with shiny, thick or yellow gum, they are not original gum.

Later Montreal and Ottawa Printings have a variety of thicker, shiner gums, most of which are yellow to brownish yellow. It would be interesting to do a study of the gum types correlated to the papers and shades on mint stamps, with the shades tied into a study of dated used examples. This would allow approximate years to be assigned to the various gum types, and this could further aid the study of the Small Queen issue.

Many examples of this issue are found without gum. I'm not sure why this is, but it is important to watch for regummed stamps. These can be identified by having the wrong type of gum (i.e. colourless and shiny), or by the presence of gum on the very fine microfibres of the perforation tips, where there should not be any gum.

Hopefully, this post gives you a good idea of the potential that exists for this very beautiful issue of classic stamps.