Of all the stamps in the 1911-1928 Admiral Issue, this stamp is the most complicated in terms of the number of shades that can be found. Unitrade makes some attempt to list the broader shade groups. However, as with all carmine or dark red stamps issued before and during World War I from just about any country you care to name, there are a tremendous number of shades. The main reason why there are so many has to do with the fact that the Commonwealth countries relied on Germany for their supply of red dies. When the war broke out in 1914, these supplies were interrupted and the printers were forced to improvise and find alternate sources of dyes. It was this improvisation that led to the largest range of shade varieties in philatelic history.

Unitrade uses the general colour name, "carmine" very loosely to describe just about all the dark red stamps that Canada has issued over the years. However, in actual fact, there are very few stamps that are actually truly carmine on the Stanley Gibbons colour key. Many so called carmine stamps are actually very dark rose-reds or dark scarlets, as they lack the bluish undertone that true carmine colour usually has.

Unitrade treats the shade naming differently for the sheet stamps, coils and War Tax stamps, which complicates the picture considerably for someone trying to make sense of all these shades, especially when they have very few stamps to work with.

This post will attempt to show you what the various major shades of this stamp look like. In doing this I will show you scans of what I believe corresponds to each Unitrade named shade group and then I will cross-reference to the names in the Stanley Gibbons colour key. Unfortunately I do not have examples of some of the shades. However, I will start by showing what I do have, and will update this post regularly as my stock of these stamps continues to grow and I have more material to illustrate.

I will look first at the sheet stamps and booklet stamps, then at the coil stamps and finally, the War Tax Stamps.

Interestingly, Unitrade assigns very little premium to any of the shade differences, with their very scarce "Pink" shade being the notable exception. I think that this likely reflects the fact that little has been done to study the relative scarcity of the different shades. I'm sure there must be scarce and rare shades not listed in Unitrade besides the so called "pink". This would be an excellent and potentially rewarding research project for an ambitious philatelist looking to break ground in this area.

Despite the fact that there are not great premiums attached to most of the shades, identifying them correctly will help protect you from being fooled by fakery. Many of the coil stamps, particularly the perforated 8 horizontal issue have been widely faked by trimming and re-perforating cheap used stamps and mint booklet singles from the more common printings. To a lesser extent we see this on the other coil formats as well. Many of these fakes can be exposed for what they are merely by the fact that they are printed in a shade that does not correspond with the known shades of the genuine stamps.

The Sheet Stamps and Booklet Stamps

I believe that the dates given in Unitrade for the deep red must be incorrect because the 2c green, which replaced this stamp had already appeared in April 1922. So unless this was an emergency printing to cover a shortage of 2c greens, I think the correct dates are probably 1921-1922. Another notable observation is the discontinuity of dates: there is no group listed for 1916, 1919 and 1921-22. I assume that this is because the main carmine shade is intended as a "catch-all"for any shade not specifically falling into one of the listed sub-groups.
The Carmine Group
I don't actually have a sheet stamp to show you for this group. However, I do illustrate two complete booklet panes under the booklet stamps heading which are the same basic shades as the sheet stamps.
The Pink Group 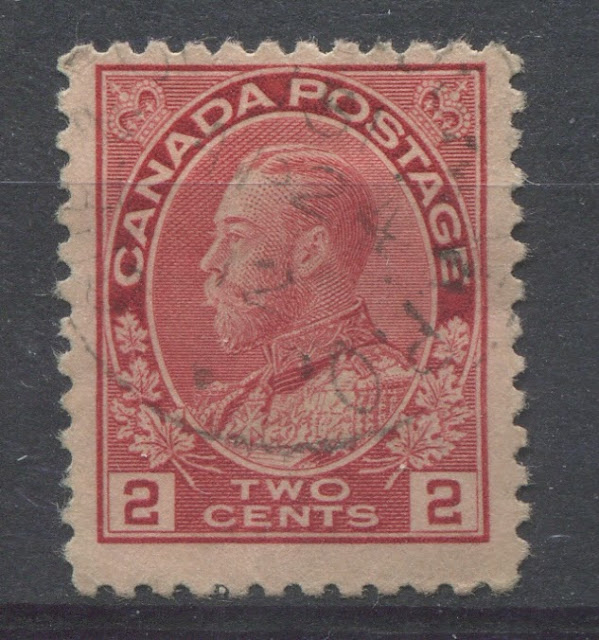 The above stamp is an example of the so called Pink shade. It is very distinct - so much so that it is unmistakable. On the Gibbons Colour Key, this is closest to the rose-carmine swatch if it were made paler. It is similar to the stamp below, but the key distinguishing characteristic is how much paler it is. This is from the very earliest printings.
The Rose Carmine Group 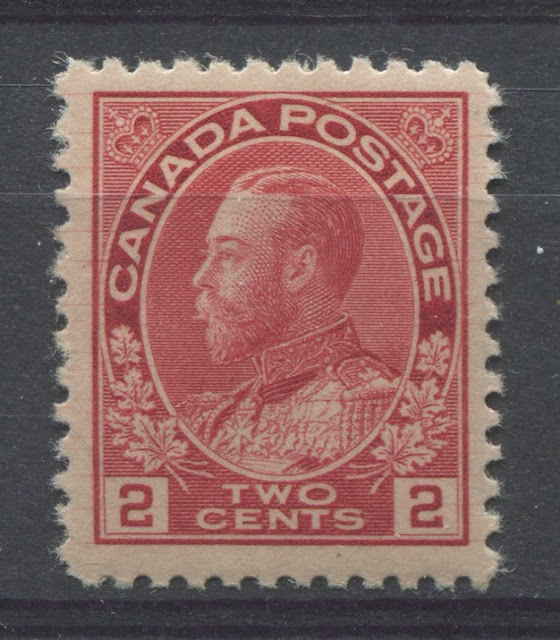 The above stamp is an example of the rose-carmine shade group. On the Gibbons key it is closest to the rose-red swatch. This shade is also from the very earliest printings.
The Deep Rose Red Group 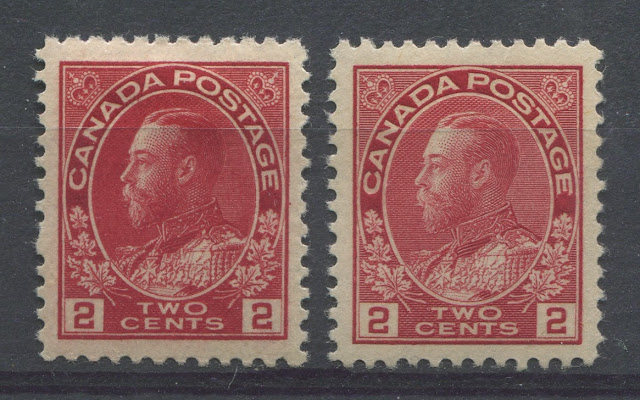 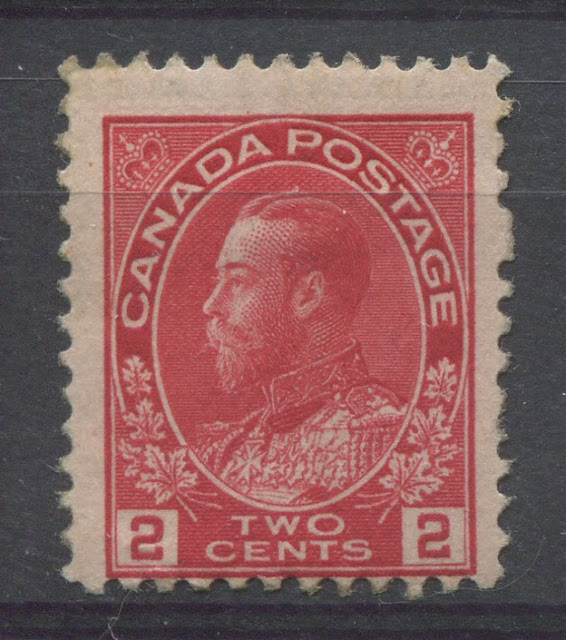 The above stamp is an example of what I believe falls into Unitrade's red group. It is closest to Gibbon's rosine swatch if that swatch were made a lot brighter.
The Booklet Stamps
The booklets were issued throughout the life of this stamp, so one would expect the same range of shades. However, this is not the case in practice. The common printings of these were the normal sized wet printings measuring 17.75 mm x 21.5 mm, on vertical wove paper, usually showing some fine or coarse mesh clearly on the back. Unitrade describes this only as carmine.  The more expensive booklets were the squat printings measuring 18 mm x 21 mm on vertical wove, or 17.7 mm x 21.5 mm on horizontal wove paper. These were the earlier printings from before 1915, and are generally found in the early shades.
The scans below show two booklet panes from the common printing that Unitrade classifies as Carmine:

The 2c carmine is found in all three of the issued coil formats: perforated 8 horizontally, perforated 8 vertically and perforated 12 horizontally. In addition, there was also the experimental coil issues of 1915. I will now look at each issue individually.

This format was experimental and appeared in 1913. It was relatively short lived, so that most genuine examples will be closest to the true carmine or rose carmine in shade. Unitrade lists this stamp only as "carmine". 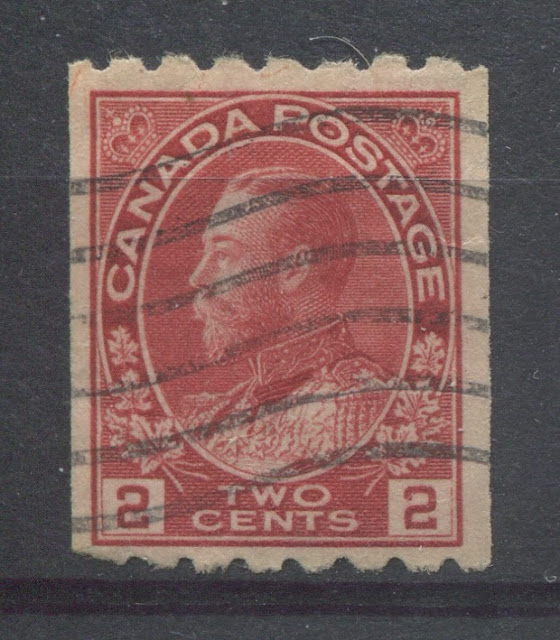 The stamp above is a genuine used example of the perforated 8 horizontal coil. It is closest to the rose-red swatch on Gibbons' colour key. It is therefore, almost identical to the sheet stamp above that was classified by Unitrade as rose-carmine. The way that you can tell this is a genuine coil is by the breaks in the outer vertical line of the right numeral box.

Nearly all fakes of this coil will be the wrong shade, being a deep bright rose-red, rosine, or scarlet shade. Most of the genuine stamps will have some bluish undertone, as does this one above.

This issue format was the longest lived and covered the entire span of time during which the 2c stamp was available in this general colour. It follows therefore, that there should be more or less the same range of shades on this stamp as the sheet stamps, or at least very close to the same range of shades. Despite this, Unitrade lists only two shades: carmine and rose red.

All of the stamps and coil pairs shown in the scan above correspond to what I believe Unitrade classifies as Carmine. In terms of the Gibbons colour key, moving from left to right, we have:

These shades are all similar to those of the sheet stamps that belong to Unitrade's deep rose-red group. Yet Unitrade calls these carmine.
Rose-Carmine Coils

The above stamps and coil pair all fall into what I believe Unitrade considers as rose-red. In terms of Gibbons's colour key swatches, moving from left to right we have:
Again, though there is quite a bit of variation in this group, and in addition, these shades do not match the deep rose red group for the sheet stamps above. Instead, they are closer to what Unitrade calls rose-carmine on the sheet stamps and yet Unitrade does not list a rose-carmine shade for this coil.

This format again was experimental. It first appeared in 1915 and was all but gone by 1920. Unitrade lists two shades for this issue: carmine and rose carmine. However, the shades of this issue are completely different from the perf. 8 horizontal coils, and yet Unitrade gives them the same shade name. 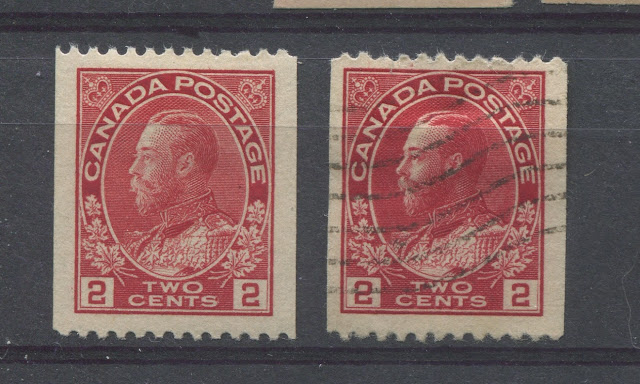 These two stamps are consistent with Unitrade's carmine booklet stamps. In term's of Gibbons' colour key we have from left to right: 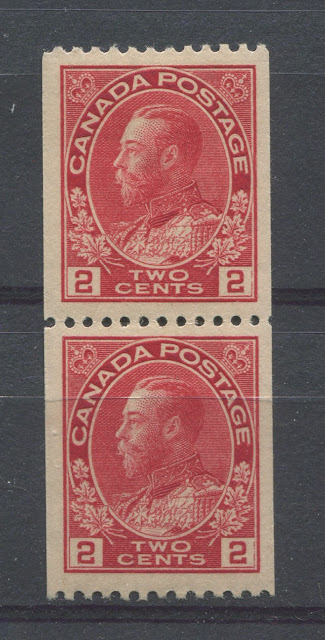 This coil pair is closest to what Unitrade calls rose-carmine, through hopefully now you can clearly see that it is not rose-carmine. In actual fact, it is closest to the bright rose-red swatch on Gibbons' colour key.

Unfortunately I do not have any examples of these to illustrate here. However, I would note that as they appeared in 1915, during the First World War

1. The 2c stamps that incorporated the actual words "War Tax"into the design. These were issued on April 15, 1915 and were in use until their replacment by the next issue below.

The three stamps shown above are all examples of what Unitrade refers to as the carmine shade. Only the last one on the right is consistent with the so called "carmine" of the booklet stamps. In terms of Stanley Gibbons Colour Key swatches we have from left to right:
These are all pretty close to the same basic colour, and it may be difficult to see the differences in the scan above. However, the differences are pretty apparent when the stamps are examined and compared in the flesh.
Rose Carmine Shades

These three stamps are all examples of what I believe Unitrade classifies as rose-carmine. However, as you can see these are in no way similar to other shades that Unitrade also calls rose-carmine. In terms of the Stanley Gibbons Colour Key swatches, we have from left to right: 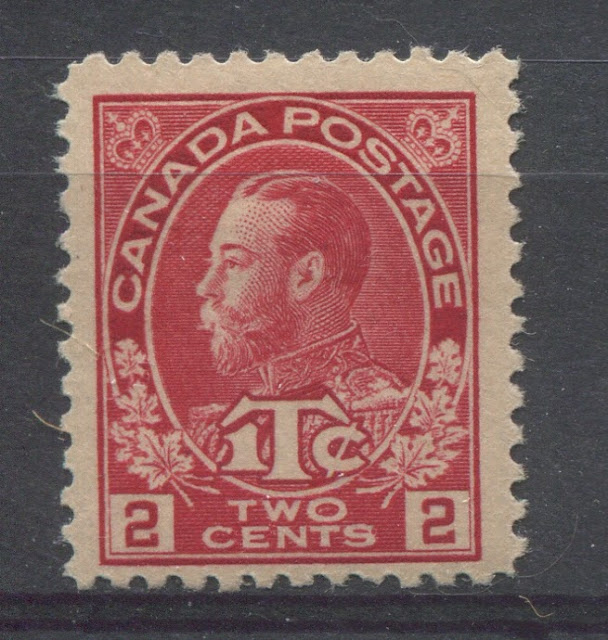 This stamp is an example of what Unitrade calls the carmine shade of this stamp. On Gibbons' Colour Key, it is closest to deep bright rose-red. 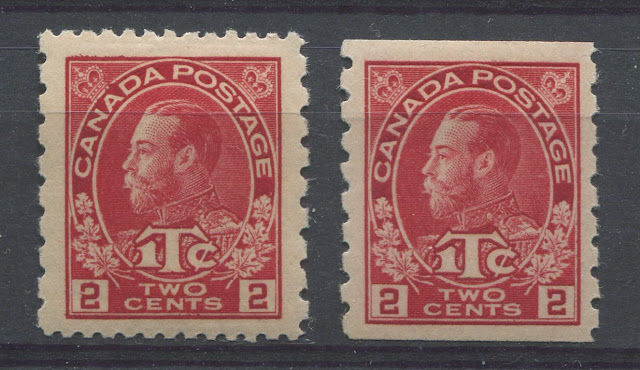 Here we have the 12 x 8 provisional issue and the coil stamp in the Die 1. Both of these are described by Unitrade as being carmine. In terms of Gibbons' Colour Key, the colours of these two stamps from left to right are:
Rose-Red Shades 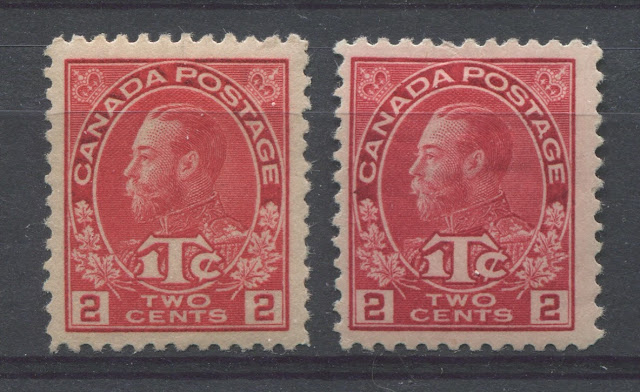 The above two stamps are both examples of shades that Unitrade considers to be rose-red. In actual fact, they are, according to the Gibbons Colour Key:

The bright rosine is getting close to one of the shades that on the sheet stamps would fall into the orange-red group. But the true orange red shades contain a bit more orange than this shade.
Recap and Conclusion
So here you have my initial attempt to shed light on these confusing shades. I am certain that my conclusions will evolve as I examine and acquire more stamps. Hopefully, what you will be able to see from this post is that Unitrade has not been consistent in their use of colour terminology as quite often the same name is used to describe shades that are really quite different.
The key observations to take away from all this are these: