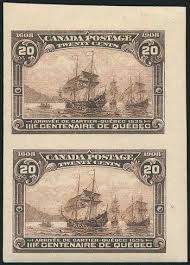 Today's post will address some of the more esoteric aspects of this issue: the re-entries, proofs and imperforate pairs that can be collected for this issue. All of this material is scarce and challenging, and will greatly enhance the experience you have in forming a specialized collection of this issue.
Re-Entries
Ralph Trimble, the premier student of Canadian re-entries devotes a considerable amount of space on his website to this issue. Rather than copy what he has published, I will provide the link to his web-page and provide a brief summary of what he has found:
http://www.re-entries.com/quebecterc.html
There are not a large number of re-entries to be found on this series, though for some values like the 5c dark blue, whose plate was not properly cleaned before being put to press, there are a large number of stray dots, guidelines and plate markings that can be found. However, these are not re-entries and Ralph has devoted a considerable amount of the coverage on this issue to an explanation of why the previously listed re-entry on the 5c was de-listed, as it was shown not to be a true re-entry.
The values that he provides illustrations for and coverage of are the 1/2c, 1c, 2c and 20c:
All in all, re-entries on this series provide a nice little sideline, with a limited number of items so that you will not become overwhelmed as a collector in trying to obtain them all.
Proofs
Like the last Edward VII issue, there are a lot of proofs that can be collected of this issue. They are all listed on the BNA proofs website whose link is shown below:
http://www.bnaproofs.com/can-quebec.html
The website lists no fewer than 65 items . The values given for these proofs range from $700 for stamp sized proofs on India paper to $6,000 for handpainted essays and large die proofs. The items fall into four categories:
All of this material is rare, regardless of what the website says about value. In most cases these items are unique in that there is currently only one reported example of each item. There are a few items which have between 3 and 6 reported examples, but by and large you are going to find yourself waiting a long time and perusing a lot of auction catalogues if you hope to obtain a complete collection of this material.
Imperforate Pairs
All values exist in imperforate pairs. There were two distinct printings of these, each in a slightly different shade. One of the printings was on gummed paper, while the other one was on ungummed paper. The ungummed stamps are from the first printing and generally the shades are deeper. Unitrade values them all at $1,000 per pair, with an NH premium for the pairs that exist with gum.
This brings me near to the end of my coverage of this beautiful issue. My last post on this issue will look at some of the pitfalls associated with this set and collecting postal history of this issue.
Back to blog