Of Stamp Gum and its Originality - How to Authenticate Gum

It has been said before that there is perhaps no substance on earth that is more valuable, in terms of its volume, than original stamp gum on classic stamps. Collectors will pay up to 1000% more for a stamp that has it, and more commonly 100-200%, than a stamp that lacks it.
This of course has led to a thriving industry involving adding gum to stamps that lack it. In some cases, the re-gumming job is so good that it can fool a collector who is unfamiliar with the stamp issue at hand.
So how do you tell if a stamp has original gum or not?
Kind of like fingerprints, stamp gum has its own unique appearance for each issue on which it appears. Fortunately, there tends to be some uniformity in the chemical composition and method of application of gum by specific printing firms, so understanding the characteristics of the gum they employed in production will prove to be invaluable to a collector who encounters an expert re-gumming job. It will also enable you to authenticate gum that is original but sweated or redistributed, rather than entirely new gum. Unfortunately though, the same printer often changed the makeup of their stamp gum over time, so it becomes important when making comparisons, to use stamps printed at approximately the same time.
So the key is to find an example of a contemporary stamp that you know for a fact was printed by the same company, at the same time as the stamp you are looking at, that you are certain has original gum. How can you be certain? Well, re-gumming is not worth anyone's while on a cheap stamp - say one that catalogues less than $50. So if you can either find a low value in the set, that is poorly centered, say, chances are excellent that the gum on this stamp will be original, since there would be little reason for a re-gummer to re-gum the stamp. Having said that, though there are occasions where a re-gummer will practice on cheaper stamps. So you have to look for the tell-tale signs of re-gumming, which I will get into in a minute.
Another alternative to a low value, if there isn't any such stamp available, is to locate a stamp issue from another country that is inexpensive that was printed at the same time by the same firm, like these two: 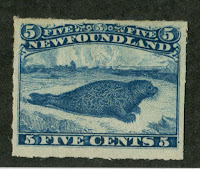 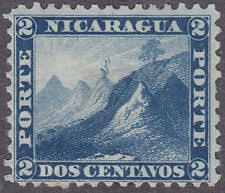 I couldn't find an image for it, but the Nicaragua volcano design above was printed in rouletted form at approximately the same time as the Newfoundland Harp Seal stamp above. Both issues were printed by the American Bank Note Company around 1879. The Nicaragua stamps are inexpensive and very unlikely to be re-gummed when you find them. However, the Newfoundland stamp above is a $400 stamp with original gum, and most mint stamps on the market lack original gum. Therefore, one has to be on the lookout for re-gummed examples. The danger on this issue is higher because the stamps are rouletted rather than perforated, which makes the re-gumming much easier to conceal.
In describing gum, I find it useful to describe colour, whether it is evenly applied or streaky, and sheen. In describing sheen, I don't find the simple matte versus shiny to be quite good enough, since there is a continuum of different degrees of shine to gum. I find comparing them to the appearance of a painted wall to be useful: high gloss, semi gloss, satin, eggshell, matte and flat.
The gum on these issues thus is a colourless, evenly applied, satin gum that looks just like this: 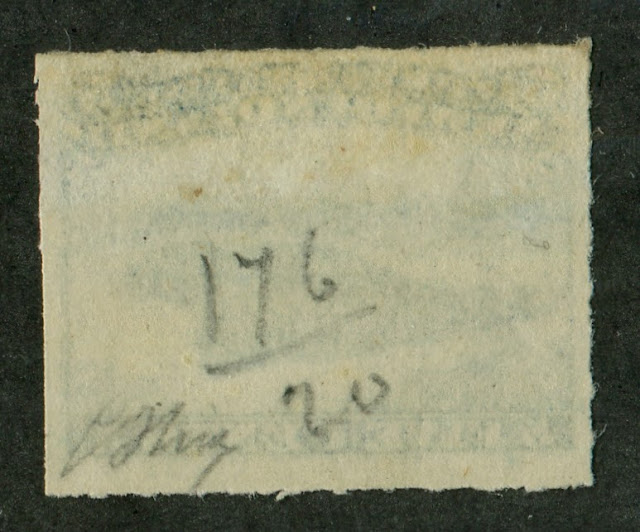 If you had a Nicaragua rouletted volcano design, you would see the same type of gum.
One caveat to this is that the gum can change over time. So when you are working with a set that was issued over a period of years, you have to be aware of these changes. Take, for example, the New Brunswick Cents Issue of 1860-1867. This set was also printed by the American Bank Note Company. However, the gum differs, depending on whether we are talking about an 1860 printing, and 1861-62 printing, or an 1864-1865 printing: 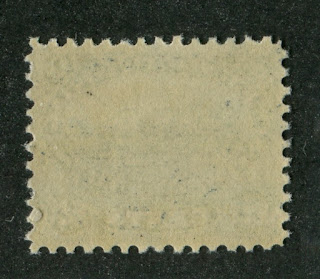 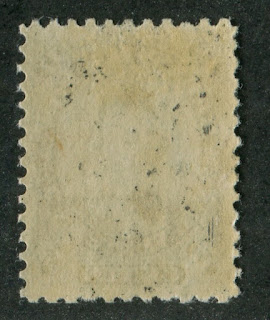 The above 12.5c and 17c values from the set are both perforated 11.75, which indicates that they were printed before 1861. The gum on these issues is a very light cream, is evenly applied and has a satin like to semi gloss sheen. 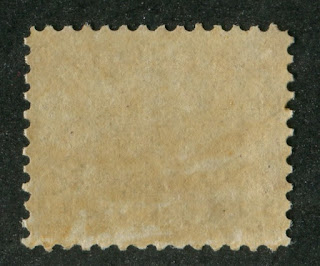 This 1c stamp from the set is perforated 11.75 x 12, which indicates that it was printed between 1861 and 1863. The gum from this period is generally evenly applied, but can be streaky as well on some stamps.It has a deeper, coffee-cream coloured appearance and an eggshell sheen. 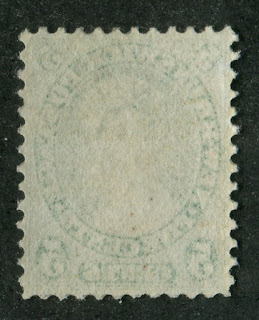 Lastly, this 5c value, which is perforated 12, is from the last printings made after 1864. It is very similar to the gum on the Newfoundland stamps above, but is a bit shinier. I would describe it as colourless, evenly applied and semi-gloss.

However, it is important to look at more than one set to understand the gums that the American Bank Note Company used. So lets take a look at the Nova Scotia Cents Issue that was printed at the same time as the New Brunswick Issue above: 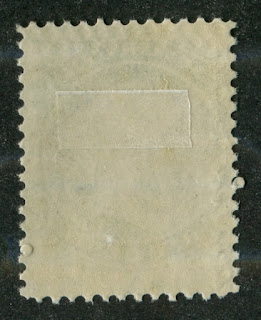 This 1c black from the set on white paper is perf. 12, which places it in the last printings issued after 1864. It is a clear, evenly applied, high gloss gum. 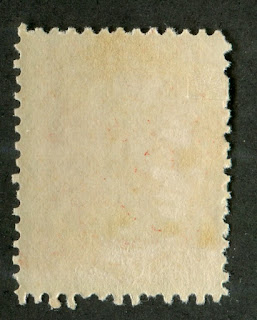 This 10c vermilion on white paper if perf. 11.75 x 12, which places it in the intermediate period from 1861-1863. The gum is similar to the 1c New Bruswick above, but is a bit lighter in colour and a bit shinier. I would describe this as very light cream, evenly applied but occasionally streaky, and semi gloss sheen.

This 8.5c green on yellowish paper is perf. 11.75, placing it in the 1860-61 period. As you can see, the gum is darker than that found on the New Bruswick issue and also shinier. I would call this, yellowish, evenly applied and semi-gloss. Though one has to be careful because the appearance of this gum, particularly the colour, may simply reflect the colour of the paper it is on. 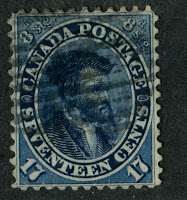 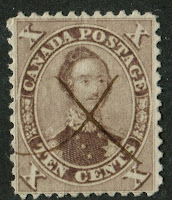 was printed by the American Bank Note Company at the same time as the two issues above. Mint examples of the New Brunswick and Nova Scotia stamps are very inexpensive, with a few exceptions, so the authenticity of the gum on these is not likely to be a problem. Getting a good understanding of what these gums look like will prove invaluable in authenticating the gum on the above Canadian issue, which is very problematic for collectors, as stamps with original gum are very expensive and typically worth 150% more than stamps without.
So if a see a stamp that appears to have a gum that you are not familiar with, what are some things to look for that will indicate the possibility of re-gumming?
1. Look at the perforation tips.
Nearly all stamps are gummed before perforating, though there are some exceptions. Thus when the stamps are separated from one another, there will usually be very fine micro-fibres at the very tips of the perforation teeth. There may also be very small areas of gum loss where the gum has been pulled away by the shearing action of separating stamps.
On a re-gummed stamp, gum will be present on the micro-fibres. Often you will see under magnification, little tiny globules of dried gum. You may even see gum on the face of the stamp in the perforation troughs that has crept there from the application process. On multiples, you would see gum in the perforation holes, where there should not be any.
A caveat here is in order: you must be aware of whether some sheets of the stamp issue you were looking at were gummed after being perforated, as you could wind up classifying a genuine stamp as re-gummed. Some of the sheets of the New Brunswick Issue above were gummed after being perforated, and many stamps have gum on the face.
2. Look for signs of the perforations being filed
Smart re-gummers are aware that their work can be detected by the above test, so many resort to filing the perforation tips down to remove the excess gum. Usually, it is impossible to do this without thinning the perforation tips to a degree, and this can be detected by either strong back lighting or watermark fluid. Another way to spot this is to examine carefully under magnification. You will see gum loss that is just too uniform all the way around the stamp, to be plausible.
3. Look at the Direction of Paper Curl
To use this test properly you have to know what direction the paper is normally supposed to curl in when the stamp is placed face up in the palm of your hand. Some issues are printed on both horizontal and vertical wove paper, so they can curl in either direction, in which case, this is not such a useful test. But assuming you have a stamp that was printed on one type of paper and you are familiar with the way the paper normally curls, lay the stamp you are looking at face down in the palm of your hand, if it stays flat, or curls in another direction, it may be a re-gummed stamp.

The only drawback to the above tests I find is that you can have a stamp with genuine original gum where the gum has either been re-distributed or sweated, or otherwise disturbed that can fail tests 1 and 3. So you really do need to have some familarity with the gum normally found on the stamps printed by a particular printing firm at a particular time. After a while you will get a 6th sense about whether the gum "looks right".