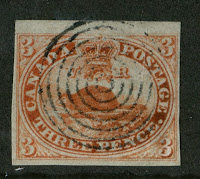 I have now completed two series of posts that describe all aspects of two relatively modern Canadian definitive issues, that have until very recently been thought to contain relatively little to interest a specialist: The Karsh Issue of 1953-1967 and the Wilding Issue of 1954-1967. When I was a boy, there were almost no detailed catalogue listings of either issue, and even today, the Karsh Issue has almost no listed varieties. However, as my posts demonstrate, these two issues are hardly straightforward, and have much to keep a devoted specialist busy for an entire lifetime. So why, after such a long time, are these issues still largely neglected?

There are several reasons, but I think the main one is that there is a strong bias in the hobby to dismiss any variety that is not either very obvious, or from the classic period as being little more than random variation. Indeed, within the professional circles of philately, there is a strong bias against the serious study and collection of stamps issued after World War II, dismissing them as nothing more than discount postage. Pretty well all of the professional attention in philately, especially at the exhibition level is directed towards the classic period. For Canada, the definition of the boundary between the classic and modern period has shifted with the passage of time. When I was a boy, it was the end of the Small Queen period and now it is the end of the Admiral period.

So why is there this tendency to dismiss the modern material? Part of it has to do with its availability: the stamps of issues like the Karsh and Wildings are widely available in almost perfect condition. I will say though, that they are noticeably less common than they were back in the 1980's, as usage on mail by stamp dealers has had its impact. Another reason is that classic philately has created a set of expectations and beliefs in collectors about what is considered significant and collectible, and these beliefs and expectations are slow to evolve. I'll explain further what I mean.

Most collectible varieties of the classic period result from the inherent technological limitations of the time in which the stamps were printed, such as: 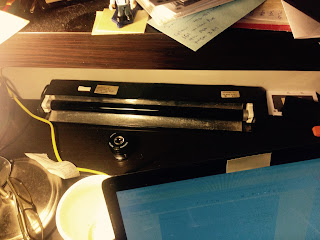 A long wave ultraviolet lamp. Many collectors have shied away from using these for a number of reasons:
It is true that the hobby suppliers like Lighthouse and Uni-Safe charge quite a bit for their deluxe models of UV lamp. There are cheap, hand held, battery operated models, but I find the quality of the light to be so weak from them that they can only really be used in a dark room. The model I have shown above is cheap - mine cost me less than $20 and has paid for itself hundreds of times over in terms of what it has revealed for me. You can buy these at most party supply stores or specialty lighting stores.
Short wave UV is extremely dangerous to the eyes, which is why these lamps come with eye shields and boxes that shield your eyes from the light. Long-wave UV is not dangerous though.
As for the subjectivity and complexity, my response would be that yes it is a complex area and there is some subjectivity involved, but no more really than would be involved in the study of shades, or papers on classic stamps.
So I believe that the key to recognizing the potential of modern philately is to recognize that one has to look at different aspects of the stamps using different tools than one is accustomed to using on classic stamps. I'd be interested to know your thoughts on this topic.