The postal history of this issue, as with most issues provides many challenges for the dedicated philatelist, and can occupy as little or as much of your time as you wish to devote to it. One aspect to this issue that makes if different from the earlier Victorian issues is that it is the first period in Canadian philately to feature:

There are many ways that you can approach collecting the postal history of this issue:
These are just a few ideas to get you thinking.


All the postal stationery of this issue, except for the envelopes, featured a replica of the issued stamp design printed in various colours. The envelopes featured an oval embossed relief of the King, surrounded by a pattern of loops and the inscription. The issued formats included:

The characteristics of the 2c dies are:
In addition to the die types, it is possible to find the following varieties on envelopes:
I do not know if all of these varieties exist on this issue, but I imagine that they all should exist, and can be found after examining a large number of envelopes.

The wrappers exist in a wide variety of paper colours and a very rarely found intact and undamaged, especially when used. Such items are worth a considerable amount of money in clean, undamaged condition.

The postcards are often found with printed designs in the corners or on both sides of the cards, as businesses would buy them and then print what they wanted on them. These are often in such pristine condition and are often found uncancelled, but are in fact used.

The possibilities are almost infinite with the covers of this issue. The most common covers as one would expect are the 1c and 2c drop letter and local letter covers. Generally, these are very common and not that special, but they can occasionally contain  artwork that make them very desirable and valuable:

The high values are rarely found on cover. The best known and most valuable cover recorded in this series is shown above. It was in Ron Brigham's collection and was a partial money packet sent to the Molson's Bank, and is franked with $2.05 in postage, which likely covered insurance on the money that was sent. Single usages of the 10c, 20c and 50c on cover are worth in the hundreds of dolars per cover.
The 7c value is quite commonly found on local registered covers, as it was used to pay the 5c registration fee plus the 2c local rate. Such covers are usually worth $25-$50 depending on condition and where they were going.
The 5c value is usually found on foreign covers to Europe and British Commonwealth countries. Single usages are not that rare and typically sell for $50-$75, again depending on condition and destination. The common destinations would be the UK, followed by the Western European Countries. Eastern Europe would be worth more, as would Commonwealth nations outside Europe. 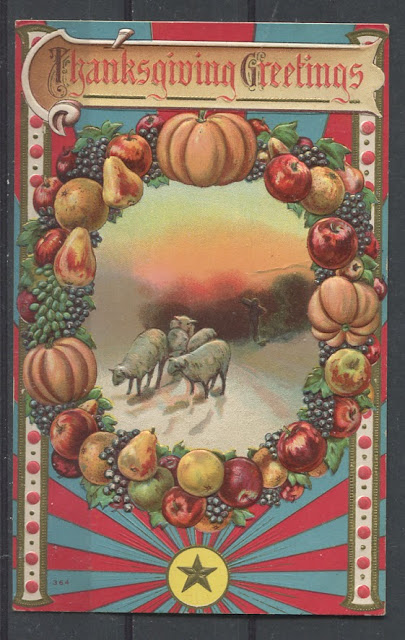 As I had said in my earlier overview post about this issue, this was the Golden Age of the postcard, with many postcards being of a very high artistic quality, such as the one shown above, which was printed in Germany. The scarcest cards are those that had no dividing line on the back, as the old rule was that you could only put your address on the back and no message whatsoever. Often people would get around this by writing on the front of the card. In 1907, the rules were relaxed, and written messages were permitted on the left side of the back of postcards, and so you see cards after this date being printed with a dividing line down the back. In addition to these paper cards, there were also cards embroidered in silk and cards made out of wood and leather. These are scarce, as they would have been very expensive to produce at that time.
In collecting the postcards of this period one can focus on:
The scenic cards are by far the most common, and very few are rare. The better cards will be those which depict landmarks that no longer exist, ghost towns, or places in existing towns that have changed so much as to be unrecognizable from what is shown on the card. The event cards are scarcer, but again are fairly common. The thing to look for here is extraordinarily colourful or detailed artwork such as that on the card shown above.
That concludes my post about the postal history of this issue. My next post will be the last one dealing with this issue and will talk about the proof material and plate multiples of this issue. Then I will move on to posts about the beautiful 1908 Quebec Tercentenary Issue.