The Work of Waterlow and Sons In Producing Nigeria's Stamps 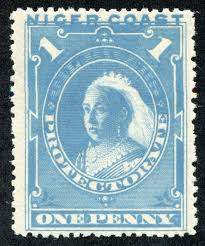 Waterlow and Sons is another well established printing firm that was based in London Wall in London, United Kingdom. Their work was prevalent near the turn of the 20th century, when they printed beautiful, mostly bi-coloured stamps for North Borneo, Labuan, Uruguay, Costa Rica and a large number of other Latin American countries, as well as the exquisite monocoloured stamps of Niger Coast Protectorate. They more or less disappear as a printer of stamps after 1913 and do not reappear until the 1930's. From this point on, they are a major player in the production of British Commonwealth engraved stamps until about 1961 or 1962, when photogravure replaces engraving as the preferred method of stamp production, and Harrison and Sons becomes the dominant printing firm. A distinguishing characteristic of their later work is that the vast majority of their stamps are monocoloured, and their colours are often cooler tones as opposed to warmer ones.

Waterlow printed the Niger coast Protectorate Issues from 1894 to 1906, when the protectorate was amalgamated into Southern Nigeria, and then the following issues of Nigeria:

All but the last issue were produced by engraving, which is the process that Waterlow was best known for. The 1960 Independence Issue was printed by photogravure, but as this was not a printing process that the company employed extensively, the quality of the work was not their best.

The above sheet shows that the early Niger Coast Protectorate stamps were printed in sheets of 30. The above sheet is from the later watermarked issue as shown by the red sheet number in the top right corner of the sheet. The earliest issues from the first designs in 1894 had no markings in the margins of the sheets, whatsoever. When the stamps were re-designed in 1894 with the name "Niger Coast Protectorate"replacing "Oil Rivers" and printed on unwatermarked paper, the earliest printings had ni marginal markings, but later printings had a sheet number marked in red wax pencil in the top right corner. As the printing numbers for these stamps were relatively low, even for the common 1/2d and 1d stamps, examples showing any marginal markings are worth a very significant premium.

The later issues were generally always printed in sheets of 60, which had the following characteristics:

Complete sheets of any issue from Nigeria are very, very scarce, particularly in fresh and unfolded condition. Even very common stamps that normally catalogue pennies are surprisingly scarce in sheet form. The marginal markings are invaluable to the specialist as they are often the only way to establish just how many plates were used to print the various issues.

The first issues of Niger Coast Protectorate printed by Waterlow are on unwatermarked paper, that almost always had a horizontal mesh. Occasionally though, one can find vertical wove paper also. The gum on these issues was a cream colour and a moderate satin sheen. These stamps were very heavily abused by collectors, as many of the 1/2d and 1d stamps were packet fillers for decades.As a result, many now have no gum, or very badly disturbed gum. But when you do find them with fresh gum, it is moderately shiny, cream coloured and smooth.

The issues of 1894-1898 are printed on a thin paper of generally poor quality, that is usually vertical wove. This paper is very susceptible to thins and tears, and many stamps one finds is faulty in some way, especially the mint stamps, which again were packet fodder (the 1/2d and 1d) and so are often found with hinge thins. Again one can find some of these on horizontal wove as well as vertical. The gum on these issues is much like that found on the earlier issues.

The 1898-1906 issues are generally on a much thicker paper, with vertical mesh and watermarked with a crown over block CA. The watermarks were designed for stamps of a different size, so they are almost never found with the watermark centered and some stamps can be found that show only the double vertical lines of the watermark border, rather than the watermark itself. The gum on this paper is generally thicker and shinier and is much more susceptible to being activated by moisture than the earlier gum. Consequently, even though the paper is thicker than the earlier issues, it is often found thinned due to the stamps getting stuck onto album pages through careless mounting with hinges.

The later Nigeria issues are all on paper watermarked with crown and multiple script CA. Usually, the paper is horizontal wove, with mesh that is not obvious unless the paper is held up to a strong light. Some printings can be found on paper with mesh that runs in both horizontal and vertical directions. The paper on all engraved issues is unsurfaced, with a smooth finish. The 1960 Independence Issue is printed on a thick, white chalk-surfaced paper. The gum on the 1935 Silver Jubilee Issue is a smooth, cream colour with a satin sheen. The gum on most printings of the 1953-60 definitives is smooth and cream coloured with a finely crackly texture. The gum on later printings is generally very white, smooth with no visible cracks and much less shiny, being more of an eggshell finish.

The inks used by Waterlow are all singly fugitive, so running of inks and fading is not really an issue with the stamps printed by them. The inks used on the Niger Coast Protectorate stamps all exhibit quite a lot of variation, so that it is possible to collect a very wide range of different shades for pretty well every stamp.

Later Nigeria Issues exhibit much less variation in shade. Waterlow did an excellent job of matching its ink colours between printings, so there are very few really obvious shade varieties. However, there are plenty of very subtle ones that you can identify with care and patience. Generally speaking the earlier printings of the 1953-60 definitives are in deeper and brighter inks, while the later printings are in colder and duller shades of the same basic colour.

One aspect of Waterlow's work that is worthy of separate mention is the perforations. The Niger Coast Protectorate stamps are unique in the sense that they exist with compound perforations that start and end on the same side, i.e. one side can be perforated 12-13 for the first half of the side and then 13-14 on the other half. Or one side can be entirely 13-14, with the other side being 12-13. Waterlow very clearly had four different perforating machines that it used indiscriminately to perforate the sheets of 30. These four machines had pins that gave measurements of 12-13, 13-14, 14-15 and 15-16. Most stamps are found with 13-14 and 14-15, with the other two measurements being much, much scarcer.

Even the 1953-60 issues exhibit some variations as well. Although the basic measurement given in the Gibbons catalogue is 12.5, you can find actual measurements that vary from 12.4 to 12.6 on an accurate Instanta gauge,  and these are found consistently in other stamps printed by Waterlow for the other Commonwealth countries. So these variations may be an aid in identifying and dating the various printings. But further studies are required.

This concludes my post about Waterlow and Sons. My next post will look at the work of Bradbury Wilkinson.