The Work of Bradbury Wilkinson in Printing Nigerian Stamps 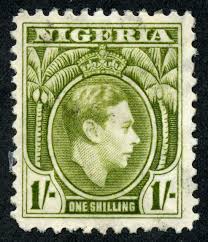 Bradbury Wilkinson, a printing firm based in New Malden, Surrey, UK, was responsible for some of the most beautiful stamps of the British Commonwealth between the early 1930's and early 1950's. Indeed who can forget the 1933 Centenary issue of the Falkland Islands, the iconic 1929 PUC pound of Great Britain, the 1933 Wilberforce Issue of Sierra Leone and the 1934 Centenary Issue of St. Helena? They were master engravers and excelled at bi-colour designs. As much as I admire De La Rue's work, the printing of this firm is in my opinion, the best out of the four major UK firms that dominated stamp production at that time: Waterlow & Sons, De La Rue, Bradbury Wilkinson and Harrison & Sons.
It is a pity then that their involvement in Nigerian philately was limited to just five issues:
Despite this relatively limited run, the King George VI definitives is a very happy hunting ground for the specialist who likes paper and shade varieties. Also, despite the relatively low catalogue value of these stamps, there are some very scarce printings that should be valued at prices more in line with the scarce 4d orange. They are all very beautiful stamps as well, that will make a wonderful display in your albums.
Printing Process
Bradbury Wilkinson was primarily a bi-colour engraver, as this was the process they used for most of the stamps they printed. Three of the four issues above were printed using the process of engraving. Occasionally they did print some stamps in one colour and in fact, all the stamps they printed for Nigeria, except for the Coronation Issue were monocoloured. The first postage due issue of 1959-1960 was lithographed - a process, that as far as I know, was only employed by them for this issue. Similarly, the second postage due issue, which came out just after independence in 1961 was printed by typography - the process used primarily by De La Rue. Again, I am hard pressed to think of any other issue that this company printed using this method.
Plate Characteristics And Layout 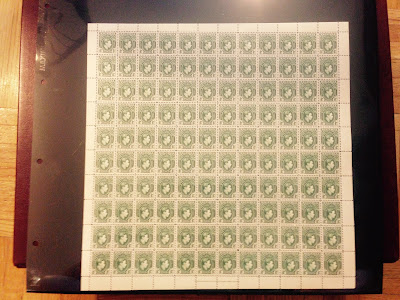 There were two basic sheet formats for the stamps printed by Bradbury Wilkinson:
The early sheets of 120 bore no plate numbers and no sheet numbers as shown above for this 1942 printing of the 1/2d. They did  bear a single inscription which read :Bradbury Wilkinson & Co. Ltd. New Malden, Surrey, England.". This inscription extended across the four middle stamps in the sheet, covering the selvage of the middle two, and extending just into the outer two of the four stamps. Later sheets bore a plate number in an italic number underneath the second last stamp. These numbers could be either a single number, or a number and alphabetic suffix, such as 1, 1a, 1b. As far as I know there is no "c" suffix, and no comprehensive sheet studies have been completed to identify all the existing plate number combinations that are possible. The sheets of 60 will usually be found folded, as they are taller than any sheet album or sheet file on the market today. Some of the sheets can be found with black sheet numbers printed in the margin just to the right of the last stamp in the top row, or they can be found with the number printed just above this stamp.


Paper and Gum Characteristics
The 1937 Coronation issue was printed on a stout vertical wove paper, which shows clear vertical mesh when viewed face-down on a black background, or when the stamp is held up to the light. The gum used on this paper is usually a light cream, which is a fine diagonal pattern of surface cracks. It's sheen is usually like that of satin.
The printings of the King George VI definitives is usually on a paper that shows the same thickness and mesh characteristics as the 1937 Coronation issue, however it differs greatly in the characteristics of the gum, which is very distinctive. The gum on these printings has no visible surface cracks, is cream in colour, streaky and has a satin sheen. The watermark usually appears somewhat indented as well. It is so distinctive, that you can usually pick it out from a large number of mint stamps very quickly.  Mid-period printings made between 1941 and 1943, are usually on a vertical wove paper, which is whiter than the earlier cream paper, and on which the mesh is much less obvious. The gum on this paper is white or light cream and again, shows a diagonal pattern of surface cracks.
From about 1943 until 1945, the paper becomes translucent and the gum becomes a toned cream colour and very smooth, with no surface cracks. This paper is very distinctive in the sense that the watermark is very highly visible in a way that it is not on the other printings. Between 1945 and 1949 the paper goes back to the white paper of the 1941-43 period with smoother white or light cream gum. From 1949 to late 1950, the paper retains the same characteristics as before, but the gum becomes shinier and is smooth. Then in late 1950 to early 1953, there is a very distinct paper that was used that has mesh running both horizontally and vertically, with very smooth, white gum. Eventually, by 1953 the paper reverts back to the paper found on the 1949-1950 issues.
The paper found on the first postage dues is similar to that from the 1950-53 period, although the gum is slightly shinier and more cream, while that found on the second postage due issue is a thick, opaque white, chalk-surfaced paper that has a satin cream gum that has extremely fine surface cracks.
Inks and Shades
There are some patterns to the appearance of some of the colours used by Bradbury Wilkinson during the life of its stamps, that are worth noting here:
That concludes my discussion of Bradbury Wilkinson's work as it relates to Nigeria.