Today's post marks the beginning of a new series of posts devoted to the first of three issues that Waterlow and Sons produced for the Niger Coast Protectorate, before it became part of Southern Nigeria in 1900.

The first of these issues is unwatermarked and is unique in the sense that it is essentially an overprinted set in which the overprint has been incorporated into the design. The stamps were originally inscribed "Oil Rivers", which was the name previously given to the protectorate. However, by the time the stamp designs were ready for production, the name of the protectorate had changed to "The Niger Coast Protectorate". So, rather than produce completely new designs, the existing designs were altered to obliterate the words "Oil Rivers" and to add the words "Niger Coast". The alterations were done so well, that the stamps look as if they were originally designed this way.

This is a reasonably complicated issue, and so today's post will serve as an overview of the areas which I will cover in more detail over the next several weeks.

There were three printings made between June 1893 and March 1894, which themselves were relatively small, resulting in total issue quantities of between 16,000 and 46,000 of each value. These are fairly low printing quantities - especially when the number of varieties in existence for each stamp is considered. What it generally means is that most all of the specific varieties of this issue are scarce. Also, because of the relatively low quantity of sheets produced, multiples of any kind, mint or used are very scarce indeed.

The Basic Designs, Printings Made, Dates and Quantities Printed 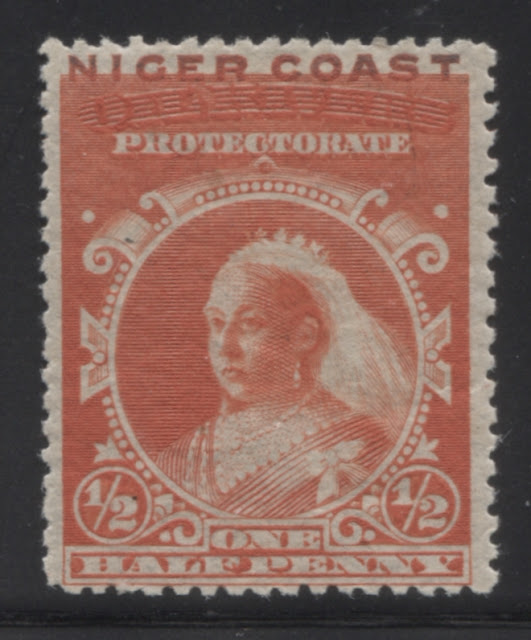 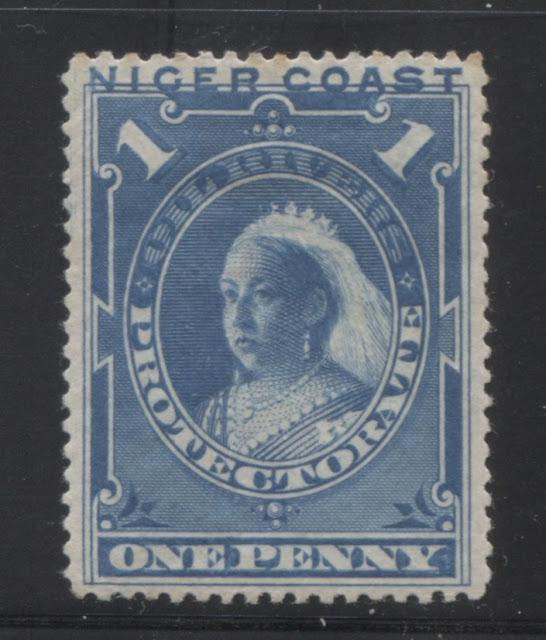 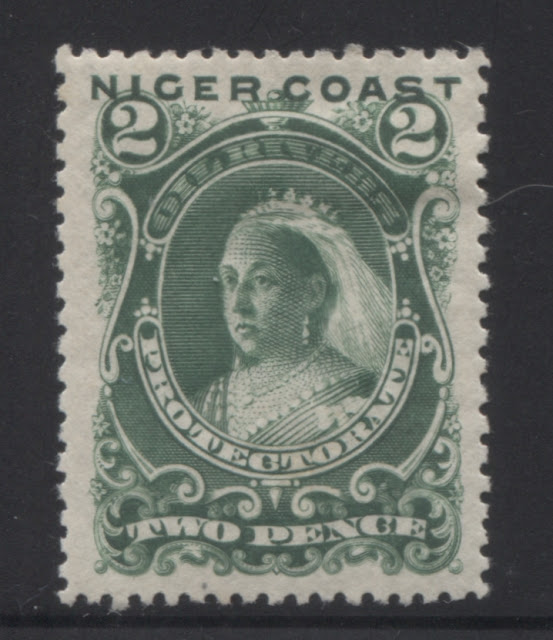 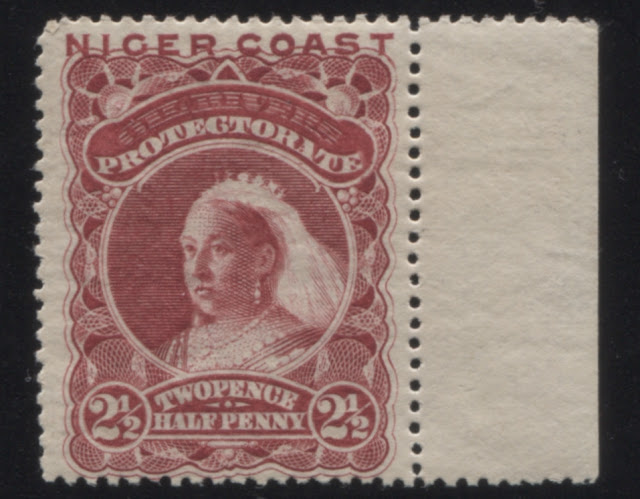 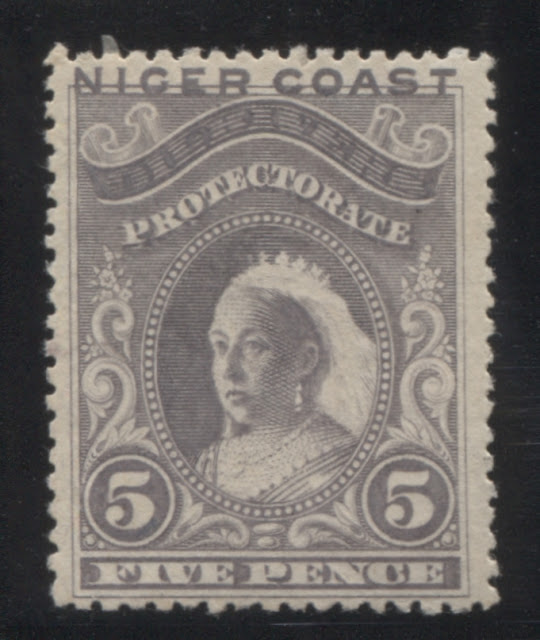 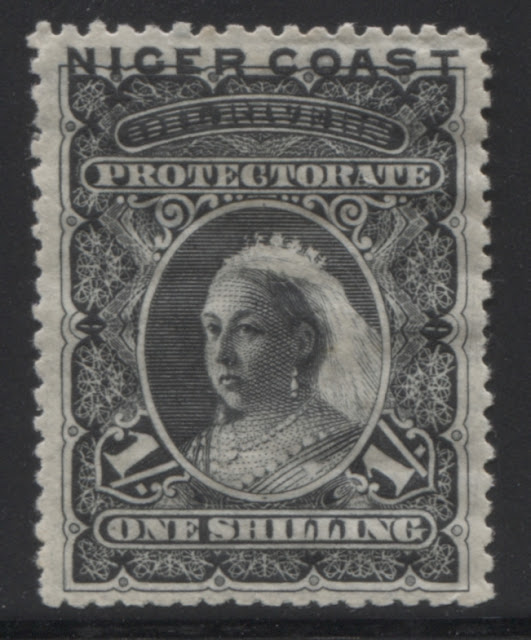 There are a number of shade variations on each value in the set, with the 5d having the most variation. Some of these are listed in Gibbons, but others are not, which is curious given that most of the shade variations are quite pronounced.

The scans below show some of the shade variations that can be found on the stamps of this set. I will deal with the shades in detail in another post, but I wanted to give you some idea of the range of variation that can be found: 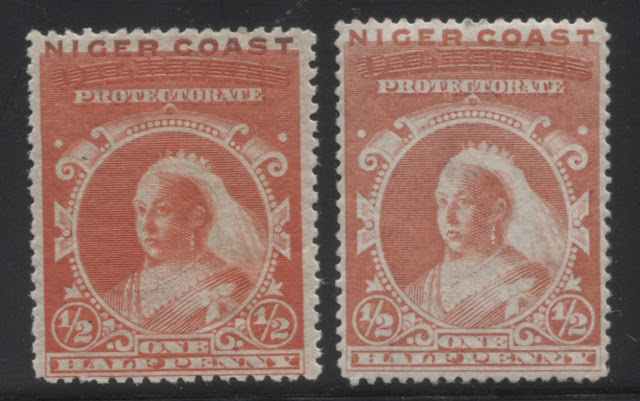 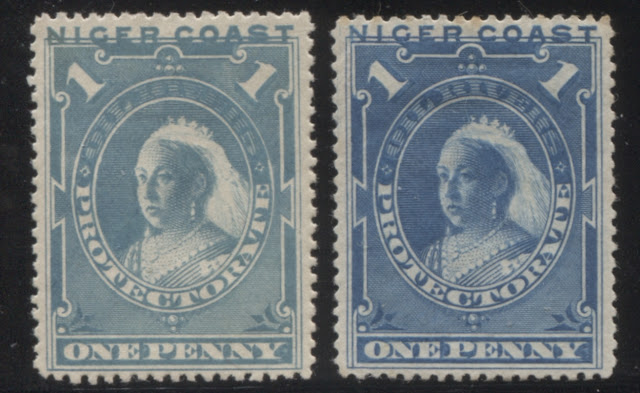 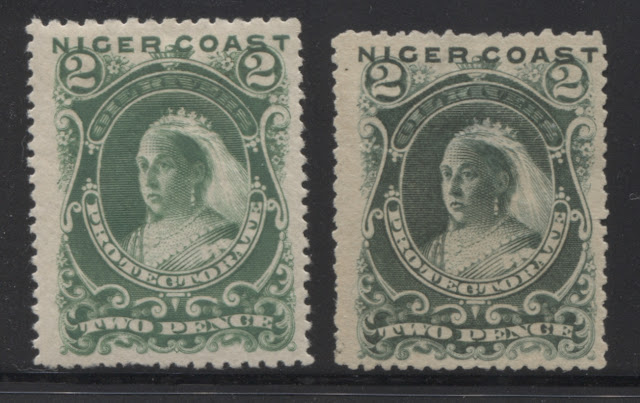 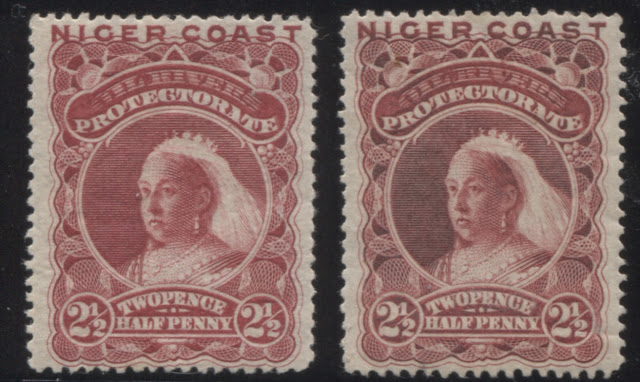 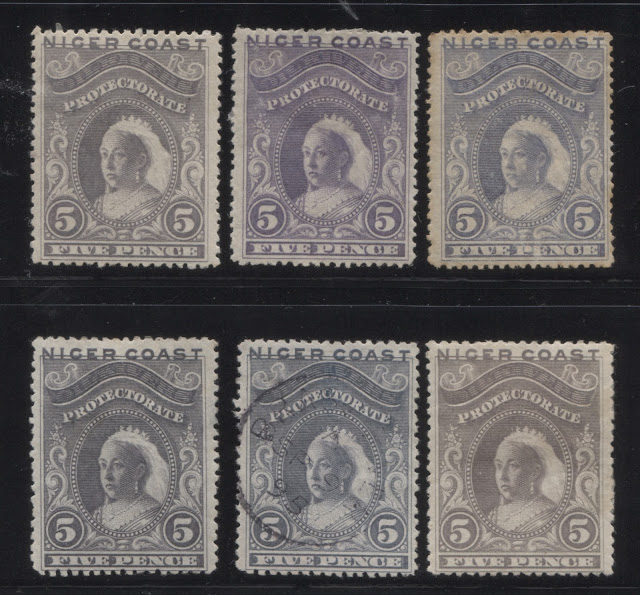 5d in various shades of grey and lilac

The more common perforations are those with the same measurement all around the stamp, usually 13.5 to 14. The scarcest ones are those that contain 12-13 on any side.
One interesting aspect to this issue is that the perforations can not only be different on 2 sides of the stamp, but on 3 and 4 sides, as well as within a side. In this later variety, a stamp will be seen to have perforation teeth that are significantly narrower on part of the side compared to the others, and if you try to obtain an accurate Instanta reading, along the entire edge, you will not be able to. You will have to break the measurement up into two sections, one for each perforation. Then, and only then , will you be able to get accurate readings. This is an area that has not received much attention from specialists, as it was not thought to have much significance. However, I believe this to be incorrect, and I will deal with the perforations in detail in a separate post, or series of posts.
The scans below show the difference between a simple perforation and the compound perforations typically found on this issue: 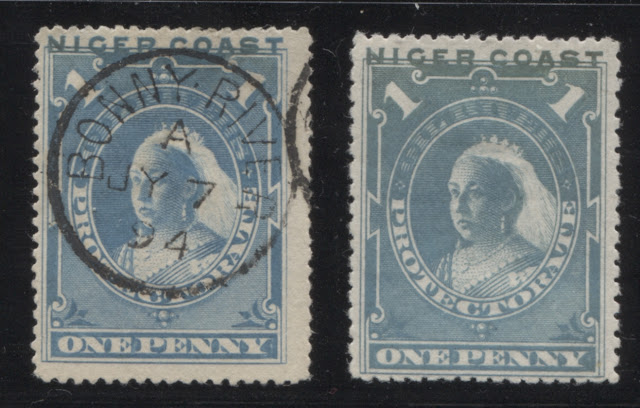 This first scan shows a simple perf. 15 example of the 1d pale blue on the left, and a perf. 14.3 x 12-12.3 on the right. The compound perforation on the right is simple in the sense that the top and bottom sides are the same perf, and the right and left sides are the same perf.
The picture below shows an example of a stamp where the perforation measurements on each side are different, and where the gauge changes part way down one side: 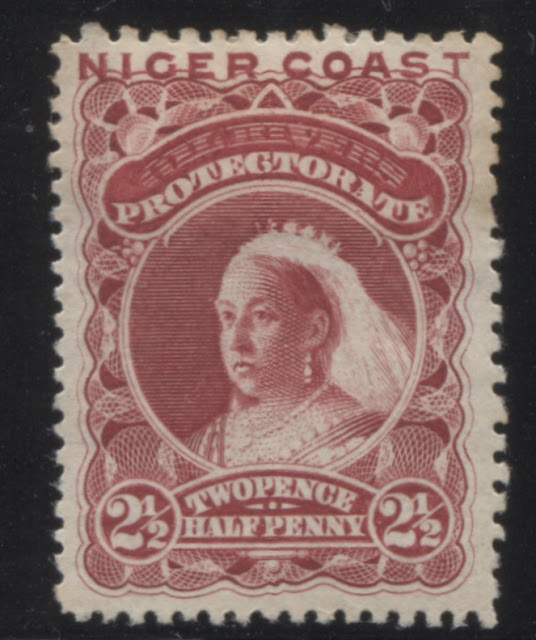 The top edge of this 2.5d stamp is perf 12.5-12.6, the right side is 14.3 for the first four perforation teeth from the top, and then it changes to 12.3 for the rest of the edge. Then the bottom edge is perf. 14.3, while the left edge is also perf. 14.3. So, a very unusual set of measurements that indicates the use of more than one machine to perforate the sheet from which this stamp came.

Ince notes that a number of different papers were used to print the stamps of this issue. Most papers are fairly thin, and fragile, which makes these stamps notoriously susceptible to tears, creases and thins. There are however thick papers and a thick toned paper that can be found on all values, which according to Ince is very scarce.

The vast majority of the sheets bore no numbers or markings of any kind. However, there are a small number of sheets that appear to have been numbered in the corner in blue pencil, presumably at the printers. It appears from studies that have been done that the sheets from the first printings were not numbered, whereas the sheets from the second and third printings were numbered. It also appears that more than one person did the numbering as two distinct styles of handwriting have been seen, each in a slightly different colour of blue pencil. Finally, it appears that the sheet numbers were not progressive through both printings 2 and 3, but started again from 1 in the fourth printing.

There are a number of re-entries to be found on the stamps of this issue. For those of you who are not familiar with what a re-entry is, it is a doubling or extension of part of the design that results from a re-entry of the transfer roll into the printing plate in order to strengthen the printing impression.

Ince contains a comprehensive listing of the re-entries that are to be found on this issue. I will devote an entire post to explaining what these are, as well as showing you the examples that reside in this collection.


The cancellations that are typically found on this issue are similar to those found on the earlier issues, except that the squared circles are more predominant in this issue, and the circular date stamps are larger than those used on the 1892-1894 issues. Like the previous issue, these cancellations can be found struck in violet and red.

The scan below shows a few of these cancellations on the 1/2d vermilion:

Based on the numbers printed, the two end stamps are most likely to be from the 3rd printing, but the middle stamp must be from either the first or second printing, because it is dated prior to March 12, 1894.
Multiples
The total number of sheets printed for the stamps of this issue varies from a low of 266 sheets on the 2d green to a high of 957 sheets of the 2.5d. These numbers are extremely small, so that the chances of any significant number of pairs or blocks surviving into the present day is very small. Consequently, I only have a few multiples in my collection, some of which are shown here: 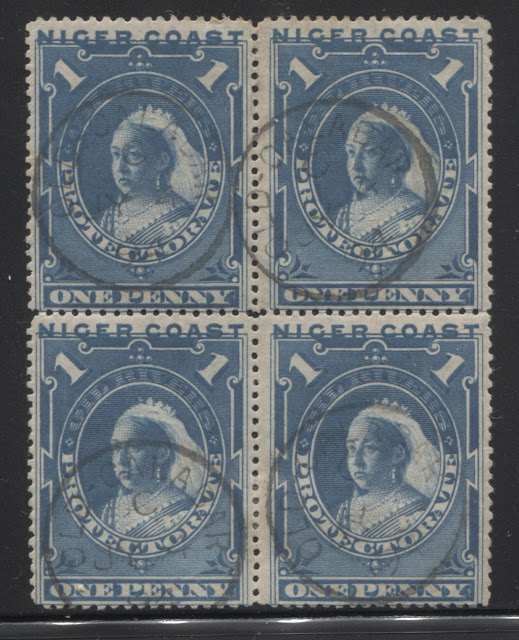 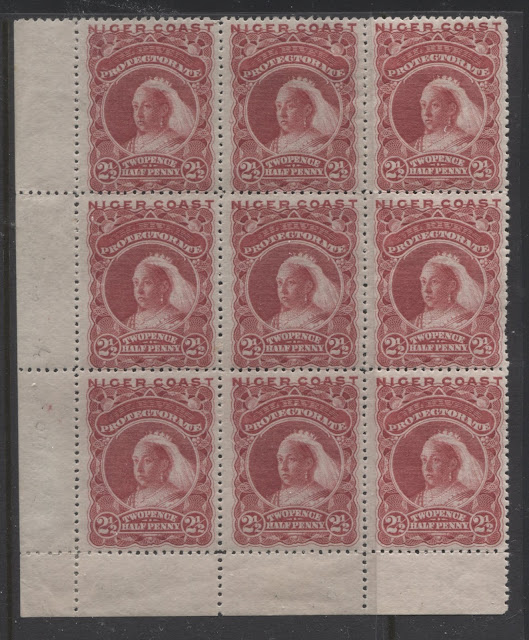 A lower left block of 9 of the 2.5d. The sheets were 48 stamps, so they were likely 6 x 8, or 8 x 6. This block bears no sheet number, but it is possible that it is from a printing in which the numbers were placed on the top right block in the sheet. 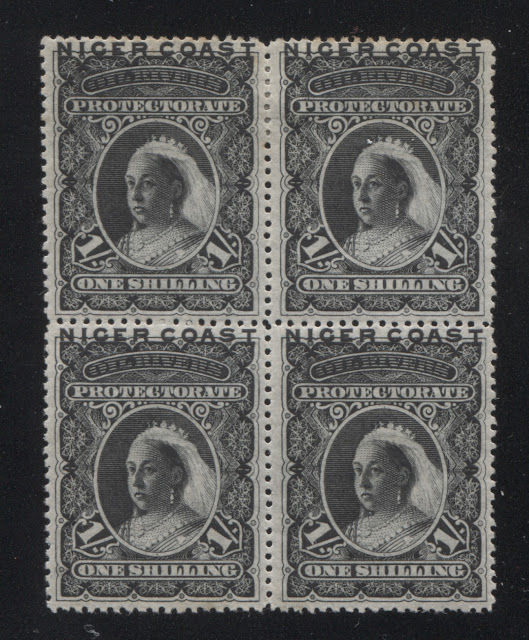 A nice block of the 1/- black that shows traces of re-entries on all four stamps in the block. I will detail these again in the post about the re-entries on this issue.
Covers

I have very few covers bearing the stamps of this issue, but one such cover that I do have, which bears the entire set, and is likely philatelic is shown below: 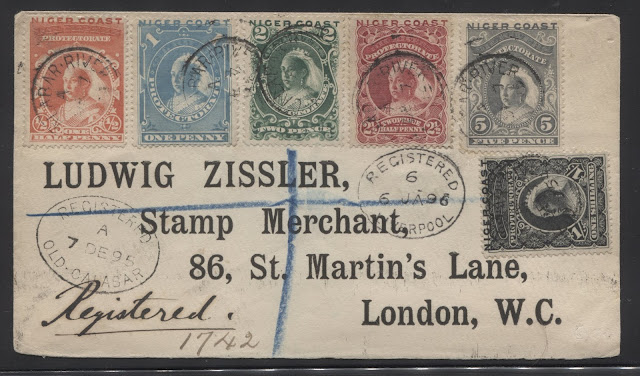 It is a registered cover sent to Ludwig Zissler, who I believe was a London stamp dealer on January 6, 1896, after this set had been replaced by the second unwatermarked Waterlow issue.
This concludes my overview of this issue. Next week, I will look at the shades, perforations, papers and Re-entries on the 1/2d vermillion in more detail.
Filed in: 1894 First Waterlow Unwatermarked Issue