The Scarcity of Nigerian Stamps

It feels like it has been months since my last post. I have been taking a break from posting in order to concentrate on sorting out my stamps and organizing them into some kind of order. I have been trying to sort the multiple copies that I have of most issues into different printings, papers, shades, perforation types, and so on. As part of my study, I have sought out and acquired the only literature that I can find on the subject, which has turned out to be a few journal articles, written by my fellow study circle members. In the process of reading these articles, I have come across data regarding the issue quantities of many of Nigeria's classic stamps that illustrates why this country has so much upward potential to philatelists looking to get into a collecting area that simultaneously offers breadth, depth and scarcity.

For example, most of the stamps issued prior to 1914 were printed in quantities of less than 50,000 for each stamp, with the 10/- purple brown Queen Victoria of Lagos being the rarest regular issue, with only 420 printed. Within this period, there are scores of higher value stamps above 1/-, that had issue quantities of 5,000 or less. Even more interestingly, the order quantities of the post offices during the period prior to 1914 were quite low, being often just few thousand stamps. So the total issue quantities were often spread over a very large number of small printings. This is a boon for the shade, paper and perforation enthusiast, who can embark on the challenge of obtaining all known printings. Because the quantity of each printing is small, obtaining a full set of all printing types is quite a challenge. It is all the more challenging because there is no comprehensive reference source that lists and describes all the printings and explains how to identify them.

Even stamps that seem to be comparatively common, such as the halfpenny green and one penny carmine Queen Victoria stamps of Lagos, whose total issue quantities were around 800,000 to 1,000,000 were spread out over a massive 35-42 printings each, between 1885-1903. As one begins to study these stamps, it becomes apparent that the vast majority of the stamps on the market date from after 1897, and very few examples seem to be printed before 1890. This means of course, that the original 1884-1885 printings are in actual fact, every bit as scarce and elusive as the earlier 1d stamps from the earlier Crown CA or Crown CC issues. However, the standard stamp catalogues do not make this clear.

You would think that a stamp that had a quantity of less than 5,000 stamps would be worth thousands of dollars, since it is difficult to imagine more than 10-20% of the original quantity surviving. Yet, many of these stamps can still be had for as little as $100, and in some cases, even less than that.

To put in perspective, how ridiculously inexpensive these stamps are, it is useful to get some perspective by looking at what more common stamps from popular countries such as Great Britain, Canada, USA sell for.

From the USA, a $5 stamp from the 1893 Columbian Exposition Issue, was issued in a quantity of 27,350 stamps and sells for anywhere from several hundred dollars to thousands of dollars for a single mint stamp. Then there is this stamp from Great Britain:

Or how about this stamp from Australia?

And lastly, this well known stamp from Canada: 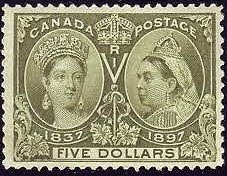 Now let us look at similar Nigerian stamps from the same period. First up, we have the two highest values in the Queen Victoria set from Northern Nigeria, which was issued in 1900. The total issue quantity of the 2/6d and 10/- was about the same at around approximately 8,000 stamps each - less than half of the quantity issued of the $5 Jubilee above. Yet the 2/6d can be obtained for around $100-$125 in mint condition and the 10/- is about $300-$500, which is curious given that they are both equally scarce.

Then we have this 10/- stamp from Niger Coast Protectorate. Again the total print quantity was just 5,000 stamps, which was spread out over at least three printings and three different perforations. Again, this stamp can be purchased in mint condition for $100-$200 and $200-$300 in used condition.

Last, but not least, there is the 10/- purple brown Queen Victoria stamp of Lagos:

As you can see, these issues are way scarcer than any of the more famous stamps that have been issued by the more popular Western nations. However, what is also very promising about Nigeria is that it has a population base that is comparable to the USA, and its economy is growing very rapidly. In addition, the restoration of democracy and the fight against corruption, are paving the way for the emergence of a middle class. With this comes the growth of popularity in hobbies involving various collectibles. It is not at all difficult to imagine what will happen to the value of these stamps if Nigeria develops a base of collectors similar to the USA, Australia, Great Britain or Canada. This is just a few of the scarce stamps that this country has to offer. There are also scores of scarce varieties, specimen stamps, multiples and covers that are rarities by world standards. This is a country that I believe has nearly unlimited potential for the forward looking philatelist.