It's been a little over a week since my last post, as I have been tied up with lotting for my online stamp shop. Yes, I buy and sell stamps too - only Canada - not Nigeria. I have to work with the scans that are on my hard drive, so I thought I would write a bit more about the Queen Victoria keyplate definitives that comprised the first stamps of the colony.

1. Shade variations in the stamps.
2. Variations in the size and shape of the lettering  of the words of value.
3. Differences in the detail visible in the design that suggests the existence of several plates to make the printings of the stamps between their introduction in 1874 and their replacement in 1904.
4. Cancellations and postal history
5. Differences in the watermarks and paper used to print the stamps.

I do not have scans at the moment to illustrate all of the aspects to be studied on this issue, so I will begin with those aspects of the issue that I can illustrate. I will start with cancellations:


This is one of the few colonial issues from the 1870's where is is possible to obtain nice circular date cancels (CDS). Most other colonies used only grid duplexes and other obliterators that were less than attractive to the eyes. As you can see from the above scan, the CDS cancels were used right from the beginning of the introduction of this issue, as this one is dated October 20, 1874. The cancels themselves evolved over the years, in terms of what is included in the cancellation. The earliest ones had no date at all - Just the town name. So far, the only town that I have seen from the 1870's is Lagos. The above cancellation has a letter above the date that represents a time code - with A being a morning code and B being an evening code. 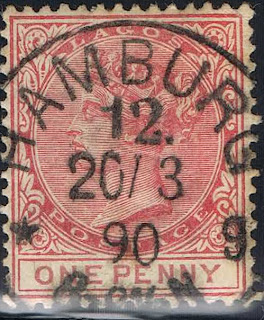 Sometimes these stamps were used by passengers aboard ships whose voyages started in Lagos, but docked in foreign locales where the ship's mail was taken off the ship and cancelled by the local post offices. In these cases, we see the foreign cancellations  on the stamps. The above stamp is an early printing of the 1d carmine that was cancelled in Hamburg, Germany. Quite often we see cancellations from Germany. 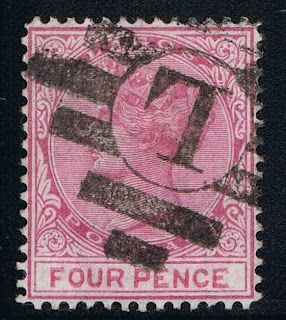 Even though Lagos did make use of CDS hammers, they did have a killer handstamp that they used fairly liberally on the earlier issues. The main killer is a L within a barred oval grid. The above scan shows this killer   used on the 4d carmine, crown CC issue from 1876. This particular example is reasonably attractive because it has been struck very clearly. But most of the time when you see this killer it is smudgy and blurry and does a fairly effective job at decimating the design. It was the most common cancellation used on these issues up until the early 1880's. 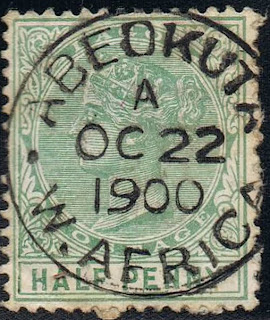 The above stamp shows an example of the later CDS cancels that are found on this issue from the late 1890's. This is also the period where we start to see the smaller villages outside of Lagos, although many of these are quite scarce. This one is Abeokuta, which is now the capital of Ogun state in Nigeria, about 64 miles north of Lagos. It is famous for Olumo rock, which is one of the major national parks in the county.
Olumo Rock 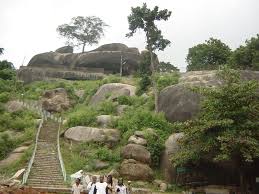 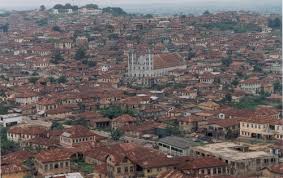 Panoramic view of the city from the rock. I was there in August of last year, and I must say that the rock was  a very interesting hike, if not a bit hazardous in places.
Then, there are discernable differences in both the size and shape of the letters used in the value tablets. I believe that as I study this issue, I am going to uncover differences in all of the values, but for the moment, the Gibbons catalogue only lists a difference on the 2.5d value that was first issued in 1891. Philatelists have, for that value identified a large type and a small type of lettering as shown in the scans below.

The top scan shows the larger letters of value, while the scan on the bottom represents the smaller letters. The difference can be tricky to spot on individual stamps, and may not really be due to size per se, but more the thickness of the letters. If you know what to look for, though, it will be much easier to sort individual stamps. On the bottom scan, all of the letters are slightly thinner, although the difference is most pronounced on the fraction bar, which has a broad, flat top, and the large 2 on the top scan.

These differences do not occur within the same sheet, and so they result from the use of more than one set of type to produce the duty plates that were used to print the denomination.

All of the values on these stamps exist with a specimen overprint. These stamps were produced for distribution to members of the Universal Postal Union so that the foreign postal administrations could know what stamps were valid for postage. They are all quite scarce, but for the more expensive stamps like the 5/- blue below, specimen stamps are much more affordable than the unoverprinted stamps. I can only surmise that the reason for this is lower demand from collectors. 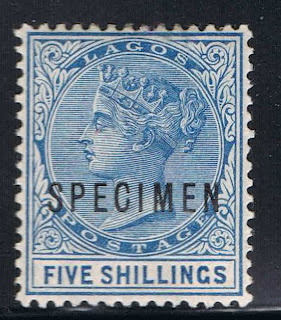 Another aspect that becomes apparent once you have more than a few of these stamps is that some of them have impressions that are much finer than on other stamps, where the printing impression is relatively coarse. If you look closely at the scans below, you will notice differences in the level of detail that is visible in the queen's hair above the crown, and the back of her head, as well as differences in the uniformity of the horizontal shading lines in the medallion. Take a look below and see if you can see some of those differences. 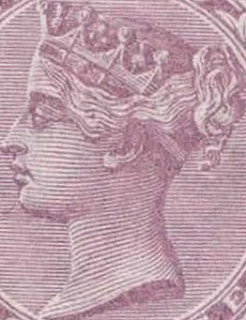 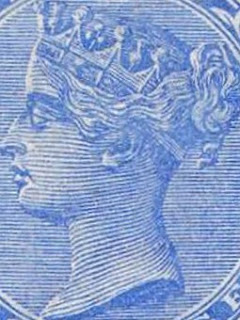 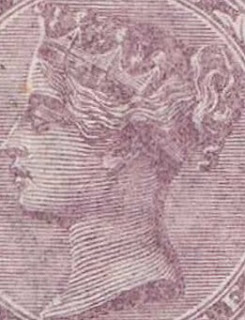 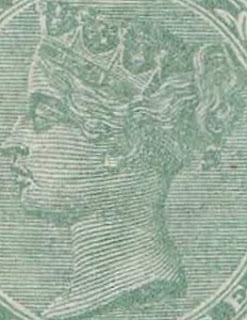 The impressions shown in these four scans are intermediate to very late impressions. On the very earliest issues you will be able to make out detail in the hair that simply cannot be seen on the above scans. In addition, the horizontal shading lines in the early printings are all of uniform thickness, as opposed to the uneven lines that you see in the last scan above.

Why does this happen and what is its significance? It happened, I think due to plate wear, because you see the print quality of most values get progressively worse, as time goes on, and then all of a sudden, the image quality is much sharper, which tends to suggest that new plates were produced.

Last, but not least are the shades, which although subtle, occur on every value in the issue. The scans below show a good variety of some of the shades found on the 1d carmine, the 6d olive green and 1/- orange - all issued after 1886. These scans also illustrate some of the differences in the impressions as discussed above. 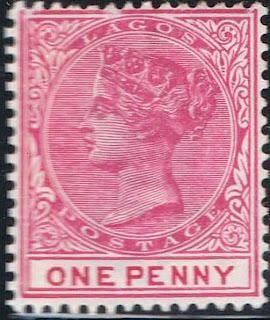 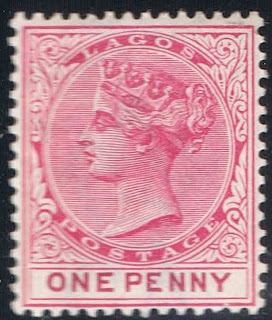 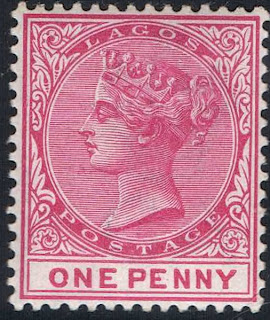 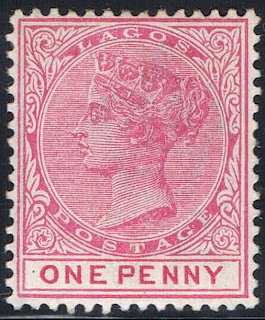 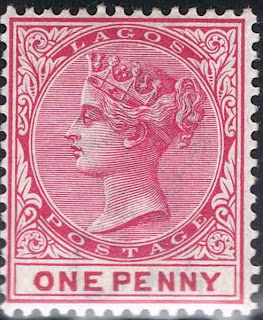 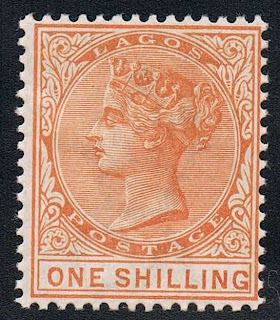 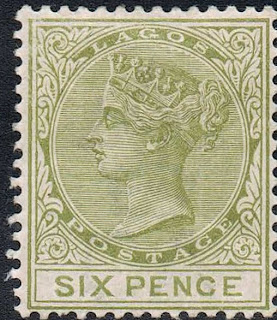 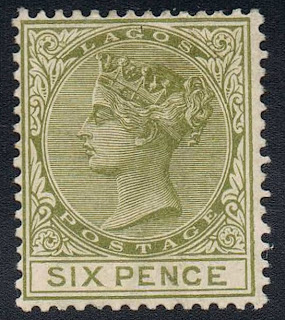 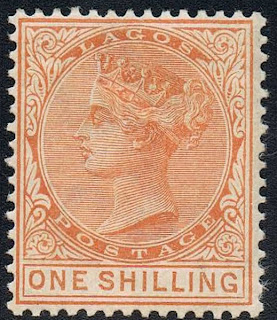 Can you see the differnces between the above stamps?