Today, we venture into the third definitive set of Lagos that was issued during Queen Victoria's reign. This set was the last to be issued in the original colour scheme that was established by the 1874 issue. The same values were issued, except for the 6d, which was not replaced until the next set appeared in 1886 when the colours were changed. The stamps were all perforated 14 using the new comb machines, and the gum is the thicker, more crackly gum that we first see on the last printings of the crown-CC issues. The 1/- orange is problematic in the sense that it was first issued late in 1884, and continued to be used until the bicoloured stamp replaced it in 1887. Therefore I am going to wait and include the 1/- as part of the fourth set, which was the UPU compliant set with the colour changes.

This issue is interesting because although Lagos joined the UPU in 1879, this set does not comply with the colour regulations, yet it was in use for nearly four years. The replacement of these stamps with the colour changes occurred gradually with some overlap between the two sets. 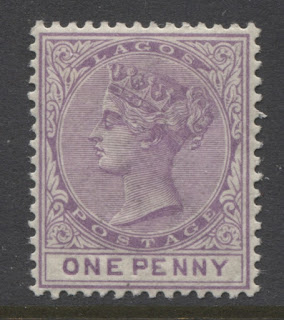 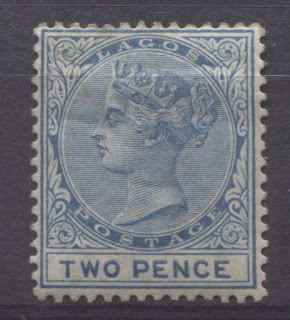 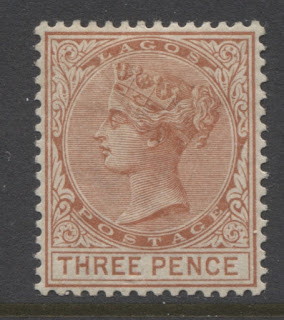 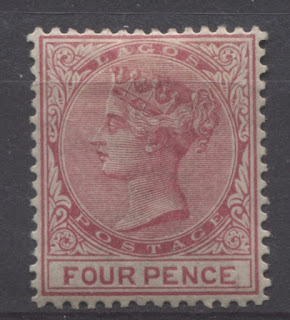 4d carmine - first dispatch February 14, 1882.
Last dispatch April 28, 1884.
36,240 stamps printed.
Printings
Ince,  in his work on the stamps of Lagos, does not provide a table of printings for this issue. However, he does mention that the stamps were generally supplied on a quarterly basis. Not every value was supplied with each shipment, but the pattern established by the earlier issues is that the most heavily used stamps were generally reprinted every time there was a shipment, but the other stamps may only have been reprinted in 75% of cases. For this issue, due to the changes in postage rates that took effect in 1879, the 2d and 4d were now the most heavily used stamps, and they were most certainly printed every quarter. So we can get an approximate idea of how many printings there were by looking at how many quarters there were between the first dispatch and last dispatch dates as follows:
It is hard to imagine that there could be between 7 and 17 printings of these stamps to come to the total quantities issued. However, it is possible. It is not really likely to be possible to identify them all, much less assign dates to them, because most of the cancellations found on these stamps have no date. In subsequent posts, I will attempt to identify some of the different printings that I know do exist, and attempt to describe their characteristics. My expectation though for these is that the number of printings for each values is between 6 and 8 of each.
I do know that from Ince's notes, that there were 5 printings of the 3d between July 1884 and June 1886, in which 17,820 of the total of 25,540 stamps were printed. This means that the remaining 7,720 stamps were printed between February 1882 and July 1884. So in all probability, there were 7 or 8 printings of this value.
Most of these will be distinguished by shade, especially the contrast between the duty plate shade. Mint stamps after April 1886 can be identified by the fact that they are double gummed - a practice that De La Rue started in response to complaints from Lagos that the stamps had insufficient gum.
Some printings can also be dated using CDS cancellations, where they are found. However, CDS's were still quite scarce on this issue. The vast majority of the used stamps that you will find from this issue are cancelled with thr 9-bar oval killers.
Specimens 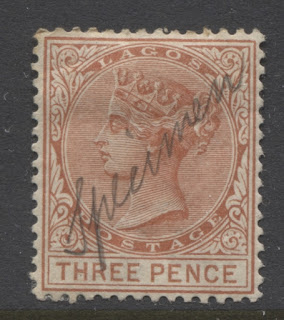 There are no specimen overprints known on this issue. The only known specimen is in manuscript on the 3d, of which an example is shown above.
Mint Blocks
This is the second issue for which I have come across mint blocks. I once saw a mint block of the 6d green crown CC with the line perforation 14, but I have never seen any mint blocks of the first issue, not have I seen any other mint blocks of the second issue. The two blocks shown below are the only blocks I have seen from this issue: 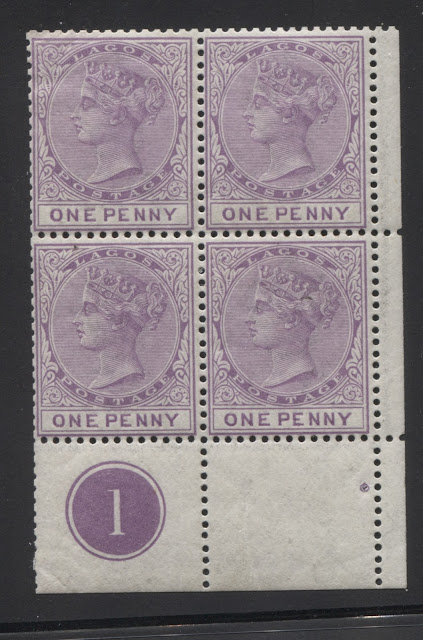 This block shows the plate number in the solid ball of colour, which was to be the standard plate marking on all sheets of typographed De La Rue stamps right up to the 1950's. This sheet also shows a small coloured dot and puncture hole underneath the 60th stamp in the sheet. This block is from the lower right corner of the left pane of 60. 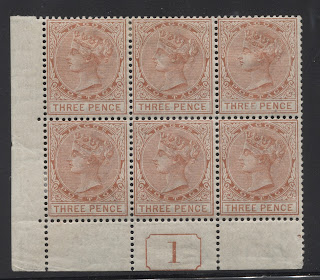 This nice block of 6 shows the "current number". This is a number that indicates the order in which the plates were laid down. For Lagos was assigned its own numbers, but because only one plate was used for Lagos stamps until 1900, and the use of current numbers ceased in mid-1890, the only number that ever appears on the stamps of Lagos is "1". However, the presence of this marking on pieces of the 1887-1903 issue is useful for establishing that the particular item was printed before mid-1890. Judging from the width of the selvage, this block is from the lower left corner of the left pane of 60.
Cancellations 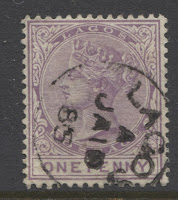 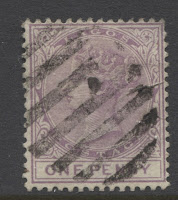 The predominant cancellation found on the stamps of this issue are the 9-bar oval killers, like the one shown on the stamp at right. These were first seen in 1880 and remain in use until 1886 when the 8-bar cancels become more common. You can tell that this cancel is 9-bars because you can see that the cancel's widest point is at the 5th bar from the bottom. The Lagos dated CDS cancel, like the one shown on the left is much, much scarcer.
Forgeries
Forgeries are known of all values on paper with a forged CA watermark. So far, I have only seen the 3d value, an example of which is shown below: 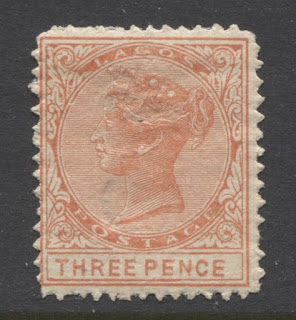 There is only one proof known from this issue. It is a 1d lilac, which is the same as the issued stamp in all respects, except that the words of value are missing. It is held in the Queen's collection.

I have not yet seen any covers from this issue at all. The first covers I have seen from Lagos are from the next issue.

This concludes my overview of the stamps of this issue. Over the next four weeks, I will take each value in turn and show you the different printings that I have identified in my own stock.