This week I start on a whole new territory: the Niger Coast Protectorate, which issued its own stamps from July 1892 until the Protectorate amalgamated with Niger Company Territories to become Southern Nigeria in 1901.

My first series of posts on this very interesting Protectorate will deal with the very first issue, which consisted of six contemporary stamps of Great Britain that were overprinted for use in the Protectorate. The stamps in question were the 1/2d, 1d, 2d , 2.5d, 5d and 1/- stamps of the then current Queen Victoria Jubilee issue.

Two printings were made of each of these stamps, with the total quantity issued of each value being as follows:


The second printings were not distributed evenly. Bonny and Old Calabar each received double the number of stamps except for the 5d, which were received in the same quantity, as Benin, Warri, Brass and Opobo. Thus, it follows that cancellations from Bonny and Old Calabar should be more common than the other post offices.  The second printings were sent to the Protectorate on March 27, 1893. The quantities overprinted were much smaller than the first printing:
Today's post will present a broad overview of this issue and then in subsequent weeks, each aspect of the issue will be covered in greater detail.
The Basic Stamp Designs and Appearance of The Overprint 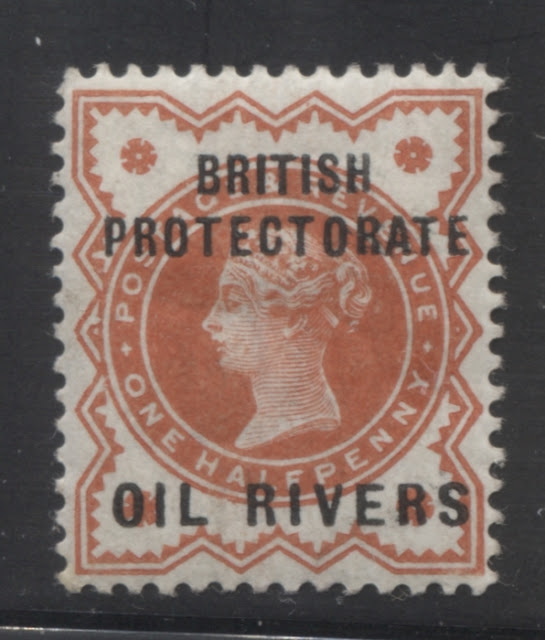 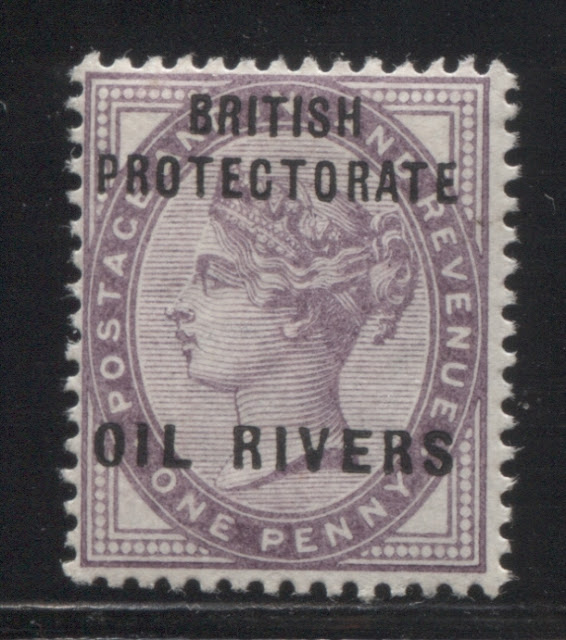 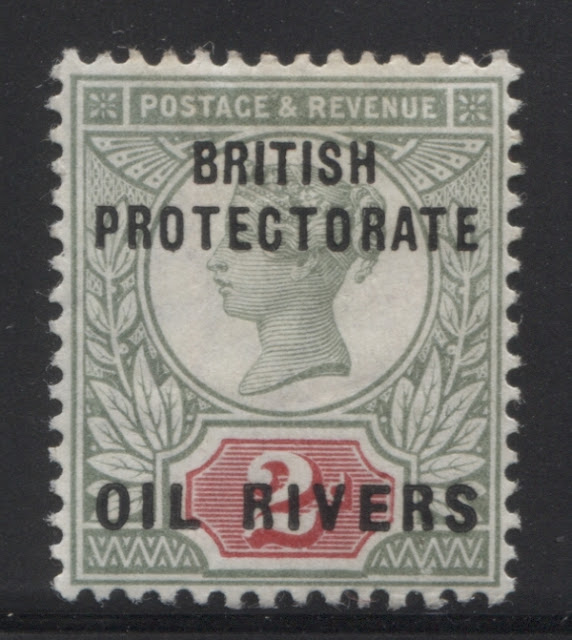 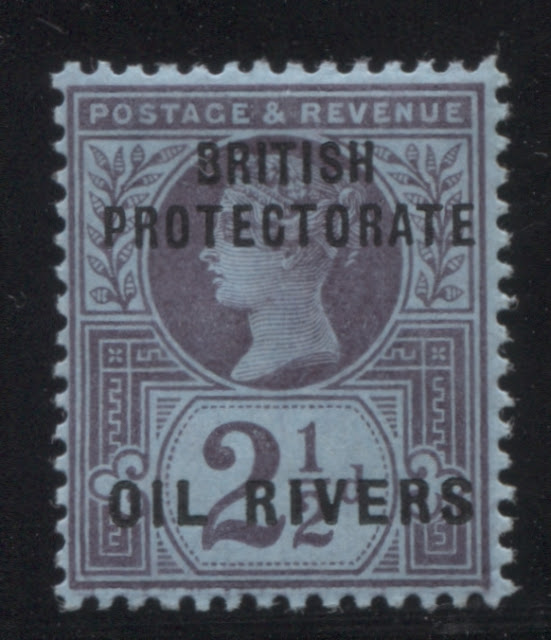 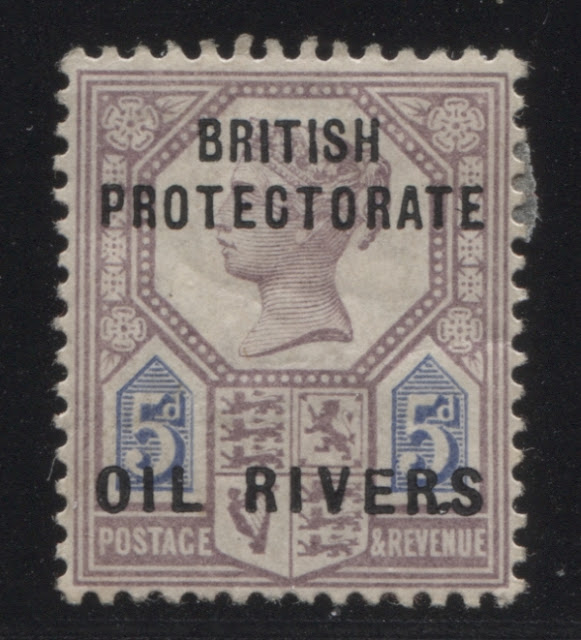 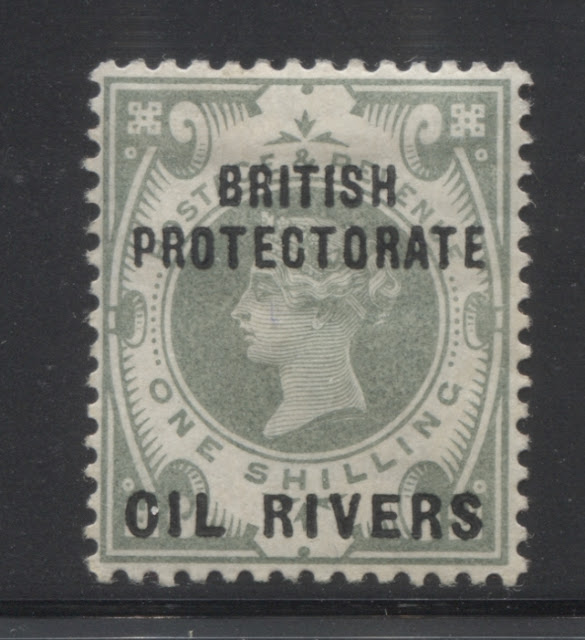 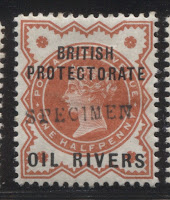 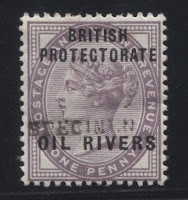 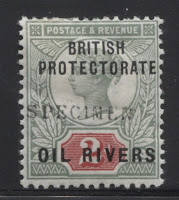 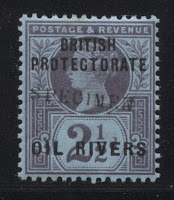 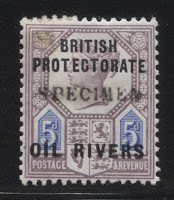 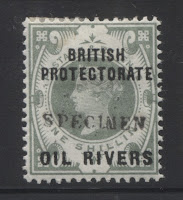 Unlike the colonies whose stamps were generally overprinted with the De La Rue specimen overprint in sans-serif letters. The stamps sent to the Protectorate were overprinted at Somerset House in small serifed capitals. Only three specimens of each value were sent to the U.P.U members when the issue was released. By my calculations there were 79 member nations of the U.P.U in 1892. This there were no more than 237 of each of these specimen overprints produced, making them very, very rare.
Die Type Differences on The 5d Value 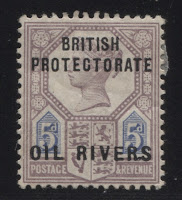 Gibbons does not list anything other than die 2 on the 5d value. However, Ince notes that examples of die 1 do exist and are very, very rare. I have both dies in my collection and will show both below. As you may recall, the more common die 2 shows very thin vertical lines to the right of the d's in each value tablet. In contrast, the die 1 stamps show square dots to the right of the d's. The stamp on the left above is die 1, while the stamp on the right is the more common die 2.
The close up scans of the value tablets on each should show these differences clearly:

The left d of the die 1 - note how the dots to the right of the d are square and much more than just thin lines.

The left d of the die 2 - notice how much less substantial the dots to the right of the d are. 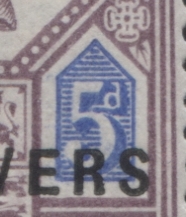 The right d of the die 1. Again, note how thick the dots to the right of the d are. 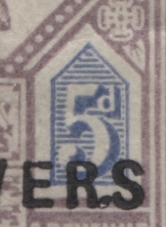 The right d of the die 2. Again, note how much less substantial the dots to the right of the d are.
Shades
There are several shade variations in each value, and at least two of each, given that all values in the set were printed more than once. I will deal with the specific shade names and all shades in a subsequent post. However, for now, I will show the most major shade groupings in this post. 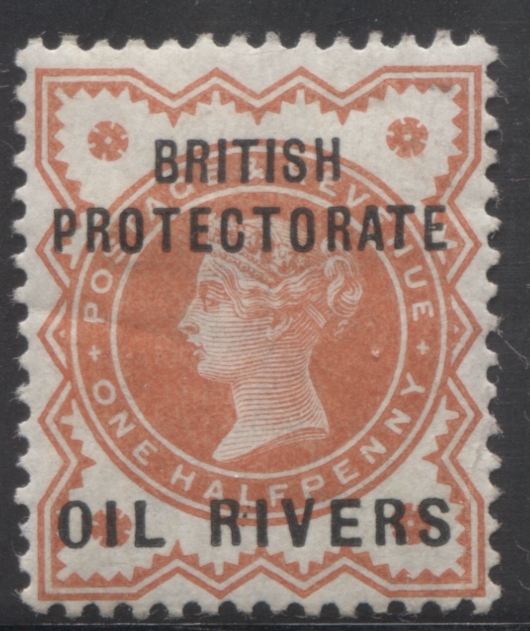 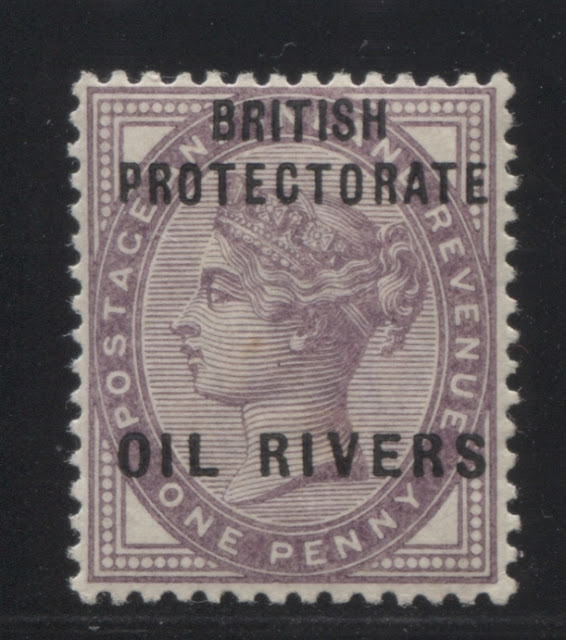 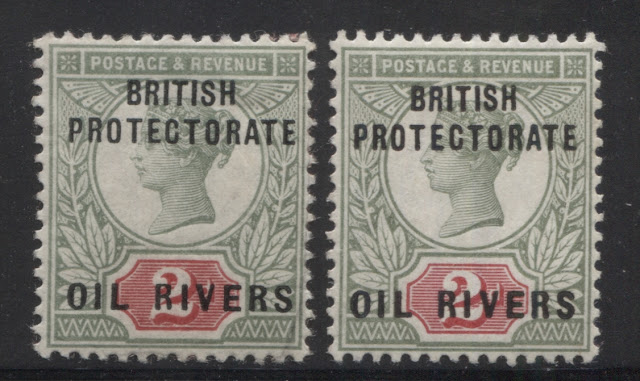 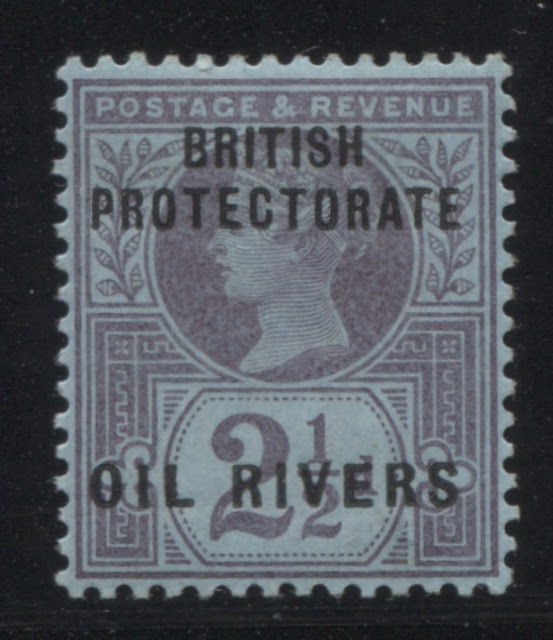 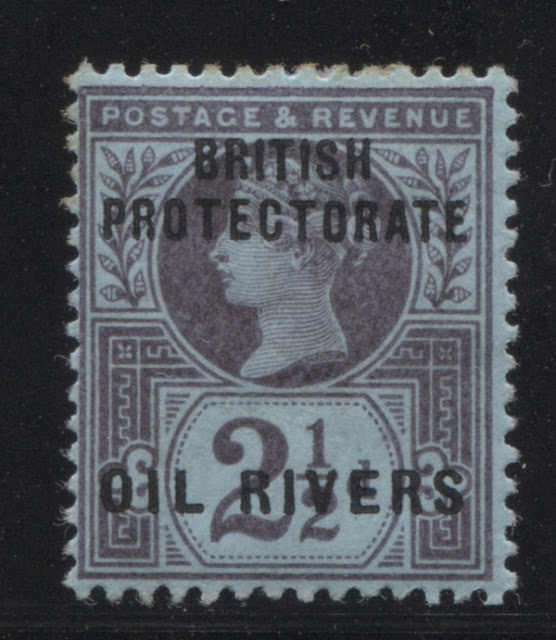 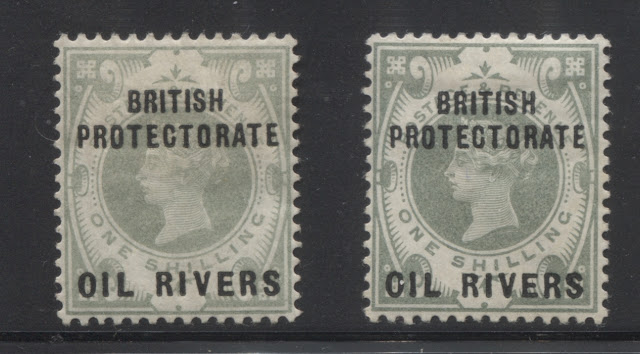 1/- dull green.
Cancellations
There were many different CDS cancellations and a few dumb cancellations in use throughout the protectorate during the period. Most are black, but a few are red and some are blue also. I will write a separate detailed post about the cancellations. But for now, here are some of the types of cancellations that are to be found on this issue: 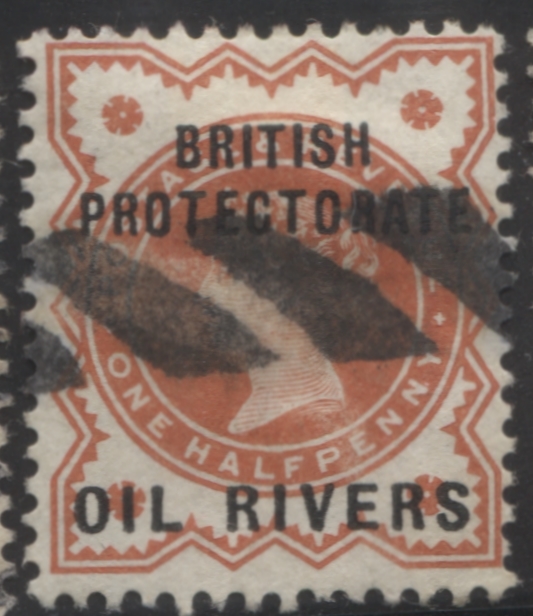 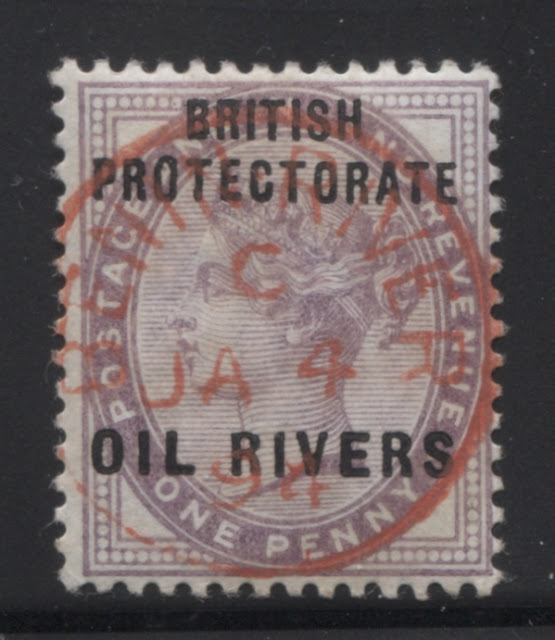 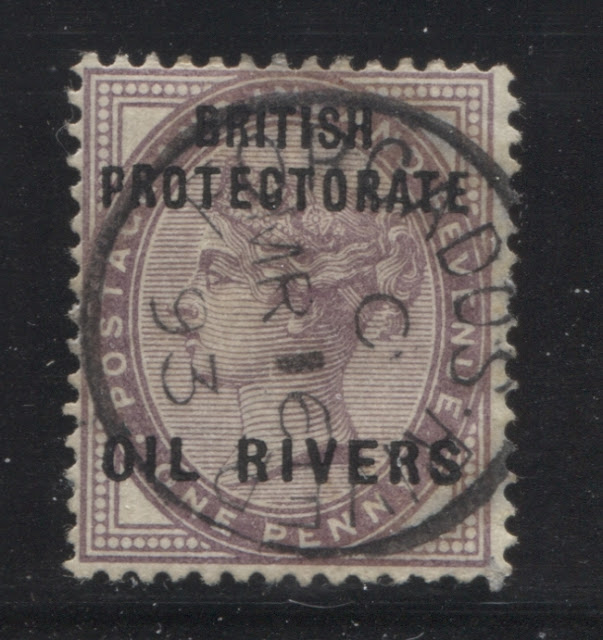 Black circular date stamp.
It is known that some of these cancels are not contemporary commercial usages, but cancelled to order remainders. Some hints will be given in the post dealing with cancellations of this issue as to how to identify them.
Overprint Varieties 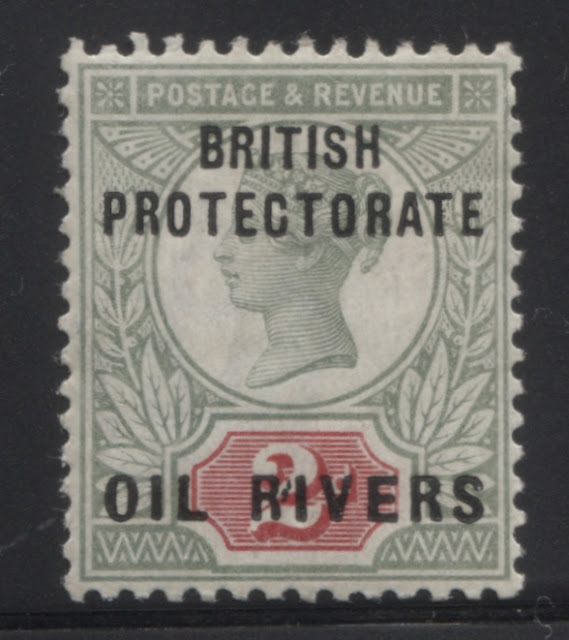 A large variety of errors or defects occur in the overprint, like the one shown above, in which there is a slash between the R and I of "Rivers"According to Porter, there were 31 constant flaws in the overprint, each of which can be plated and identified. This will be the subject of another subsequent post.
Plate Flaws
Although Gibbons does not list any plate flaws for these stamps, the Gibbons specialized does list some plate flaws for the regular Great Britain Jubilee stamps. Therefore it does seem probable that at least some of the stamps issued to the Protectorate could include stamps that show constant plate flaws that are listed in the Gibbons specialized catalogue for Great Britain.
Bisects and Local Surcharges
Between 1893 and 1894, a small number of these issues were surcharged or bisected for use in the local post offices. In many cases fewer than 5 or 10 of each type of overprint can exist. These will be the subject of another post. However, some of these are among the greatest rarities in Commonwealth Philately. Many of these have been extensively forged. I will present some genuine items in my collection as well as some clever forgeries.
Overprint Errors
One sheet of the 1d was printed out of register so that "Oil Rivers" appears at the top instead of the bottom. Only 8 examples from the bottom of the sheet are thought to have survived.
Control Letters
The 1/2d and 1d stamps can occasionally be found with control letters in the sheet margins. On the 1/2d, the letters are E, K, L and M. On the 1d, the letters are L, N, O, P, Q.
This concludes my brief introduction to this first issue. Next week I will write about the varieties of the overprint.