Continuing on with our tour around the stamps of Nigeria, today I bring you a small selection of some of the commemorative issues that were released in the later part of 1962 and early 1963, all within 2-3 years of independence. All of these issues were printed by Harrison and Sons in  London. Harrison had perfected the art of modern photogravure printing, and it was they who produced almost all of Nigeria's stamps between 1961 and 1968, when the Nigerian Security Printing and Minting Company assumed responsibility for producing most of Nigeria's stamps.


The first set that I present was issued on November 5, 1962 to commemorate the 8th Commonwealth Parliamentary Conference. 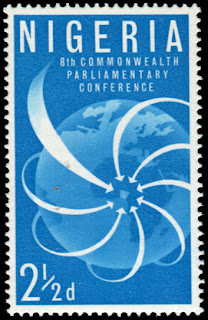 2.5d showing the symbolic arrival of the delegates to Lagos, Nigeria. Designed by S. Akosile. 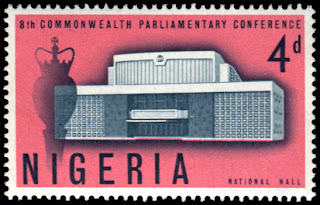 4d Mace and the National Hall  - This theatre hall was the country's national theatre until it was replaced by the now famous National Theatre, in the shape of a military cap, that was built during the Festival of African Arts and Culture celebrations in 1977. The scan below shows a contemporary 1960's image of the national hall.
and below, and image of the hall that replaced it: 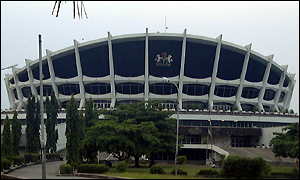 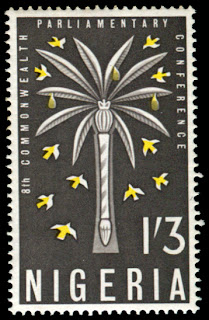 1/3d Mace and Palm Tree showing doves that symbolize Nigeria's freedom and independence. Both this and the 4d value above were designed by the well known British stamp designer at the time, M. Goaman.
This issue showed Nigeria's status as a major world nation that was hosting conferences with delegates coming from around the world to attend. The next set was issued on March 21, 1963 and was part of an international omnibus issue to draw attention to the growing problem of world hunger. It was called the "Freedom From Hunger Issue". and most of the commonwealth countries had made a contribution of one form or another to it. The scans below show the designs from Nigeria. 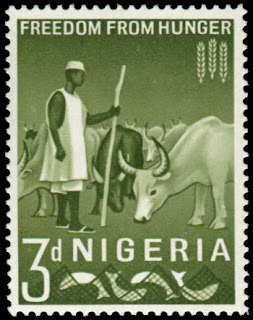 3d Cattle heardsman, most likely of the Fulani tribe. 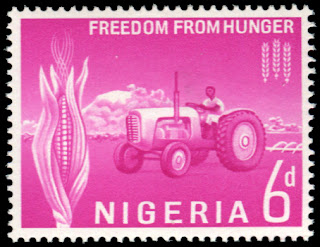 6d Tractor and maize ear. Both these stamps were designed by M. Goaman.
Next, is the Malaria Eradication Issue, which was released on April 7, 1962. This issue was a major international omnibus issue, with most countries in the world issuing stamps for this, or at least every country in Africa. All of the stamps in this set were the design work of M. Shamir of Israel. 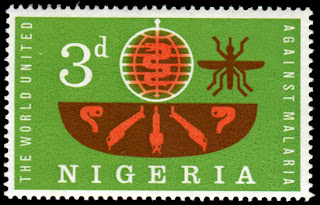 3d Malaria eradication emblem and the life cycle of the mosquito. 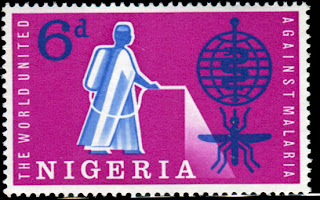 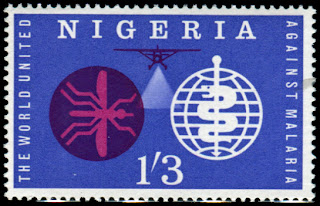 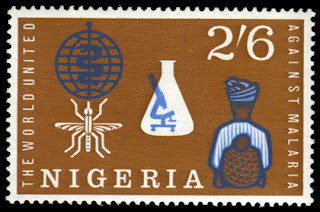 Lastly, there is the set below, that was issued on October 27, 1962 to commemorate the Lagos International trade fair. M Goaman designed all of the stamps except for the 1/-, which was designed by R. Hegeman, and the 6d, which M. Goaman designed with J.O. Gbagbeolu. 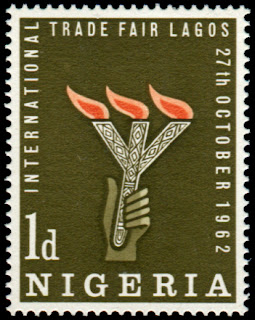 1d Hand carrying a torch which was the emblem of the fair, and is actually the delta formed by the two major rivers in Nigeria: the Niger, and Benue 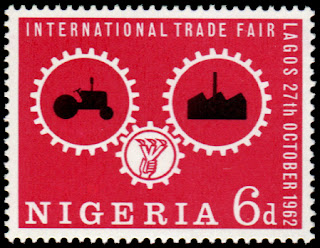 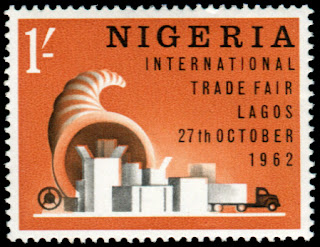 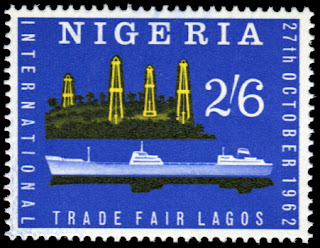 2/6d Oilwells and tanker
These stamps all show the country in a very non-colonial light, as an emerging nation, with all the hope for the future prosperity and presence on the world stage. This is a sentiment that many Nigerians under 30 today will not have grown up with, sadly. But, with the improvement of the political situation, the current generation hopefully will.