Switching gears completely from the modern flavour of the last several posts, I felt it was time to take a large step back in time to the 1890's, before Federation, to show you the first issues of the Oil Rivers Protectorate, which changed its name to the Niger Coast Protectorate on May 12, 1893. The Protectorate came into being on June 5, 1885, when the British proclaimed its existence. It extended over the entire southern coast of what is now Nigeria, and excluded only the then colony of Lagos, and the centre of the Niger Delta. The main port areas included Benin, Bonny, Brass River, Forcados River, Old Calabar River and Opobo River.

There are only a handful of territories whose stamps differed in design from the standard Perkins Bacon Britannias and Chalons, or the De La Rue Queen Victoria Keyplates. One of these was the Oil Rivers Protectorate, which started off with Great Britain Jubilee issues that were overprinted, and then went on to feature beautiful Widow's Weeds designs, that were wonderfully executed by Waterlow and Sons, who during that era, had given Philatelists, absolutely wonderful stamps from Costa Rica, Uruguay, North Borneo and Labuan, to name just a few.

The overprinted issues of Great Britain, first appeared on July 20, 1892, and continued in use until the beginning of 1894. So they were in use for a little under a year and a half. There were five denominations: the 1/2d vermilion, the 1d lilac, the 2d grey-green and carmine, the 21/2d purple on blue, the 5d dull purple and blue, as well as the 1/- dull green. The overprint consisted of the words "British Protectorate" and "Oil Rivers" in three lines, with two appearing at the top of the design and the third line appearing at the base. The first five designs appear as follows: 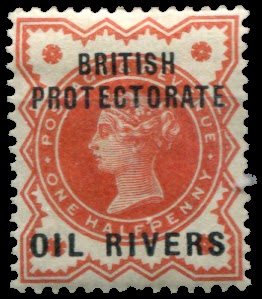 1/2d deep vermilion - this stamp exists in at least two distinct shades of the vermilion. 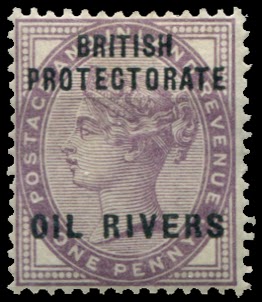 1d lilac - again, I have seen several shades of the lilac. 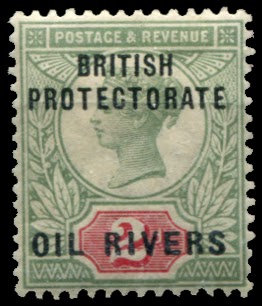 2d grey-green and carmine - I have not seen much variation of this stamp, even though I know there are some fantastic shade varieties of both the green and red that exist on the regular British issue. 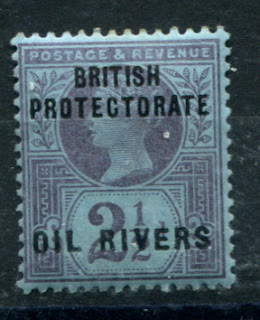 The 21/2d purple on blue. This exists in at least two shades of the purple. 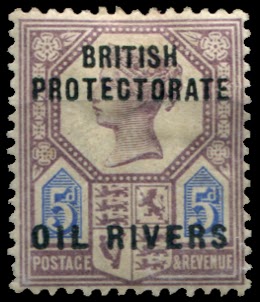 The 5d lilac and ultramarine - again, I have only seen subtle variation in the shades of both the lilac and the ultramarine, but I know that some more marked shades must exist.
I recently had the pleasure to acquire, two mint never hinged blocks from this issue, which I have never seen before, in any condition. All one usually finds with this issue are singles, so blocks are a very rare treat indeed: 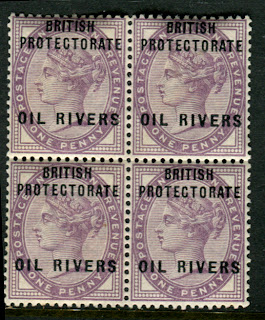 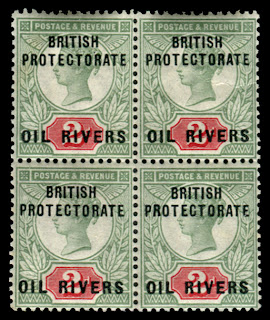 On January 1, 1894, the first Waterlow Engraved Issue appears. Interestingly, the stamps were all originally inscribed "Oil Rivers". However, before they were issued, on May 12, 1893, the Protectorate was extended into the interior, and the name was changed to "Niger Coast Protectorate". So to avoid having to destroy these stamps, the inscription "Oil Rivers" was obliterated, and "Niger Coast" was added. This is a fairly sought after issue, that is difficult to locate in good condition. The designs are as follows: 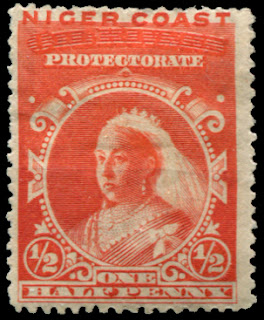 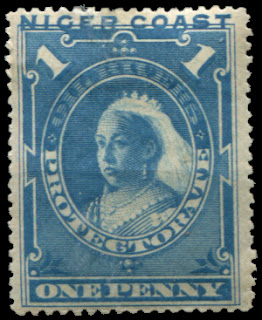 1d pale blue. There are some really prominent shade differences on this value, from a very deep blue to a dull blue. 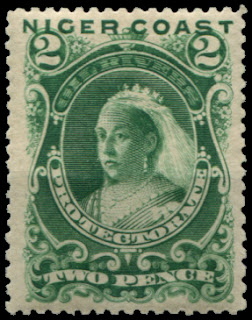 2d green. Again, there are some subtle shade variations to be found with this value. 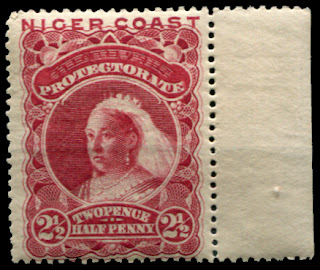 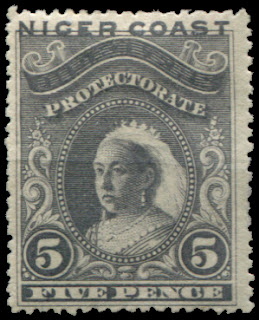 5d grey-lilac. This value exhibits the largest range of shades. The above is called grey-lilac, but is really more of a pure grey. 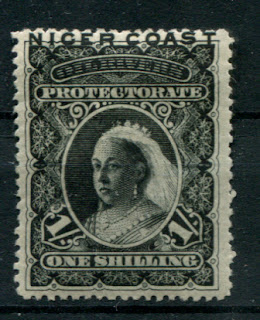 1/- black. The lathework in the background of this design is simply stunning, I find.
The main point of interest with these stamps lies in the perforations, which display an amazing amount of variation, as well as the papers, which vary from thin to thick, and exist in both horizontal and vertical weaves.
The above set had a very short life of only four months, being replaced by the following set, in which the correct name of the protectorate was integrated into the design. As with the above set, there are a large number of different perforations, and the papers all vary from thin to thick. The set consisted of the same values as the previous one, with the paper being unwatermarked, as the previous set. 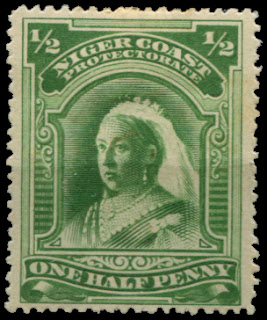 1/2d green - on this issue there are some subtle variations of the green. On the watermarked stamps, which will be shown in the next post, there is much more variation. 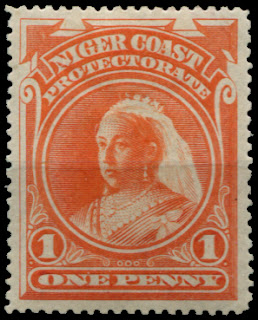 1d orange-vermilion. There is considerable variation in the shades found on this stamp. The above is a much lighter, pure orange, compared to what is usually seen, which is a much deeper vermilion. 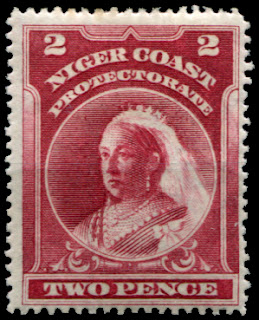 2d lake. There is some variation in the shade of this stamp, that is worth mentioning. Some examples are much closer to a carmine red than a lake. 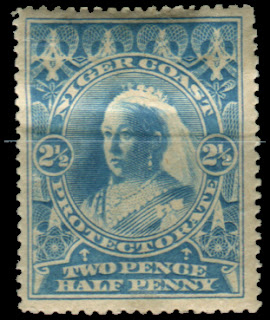 21/2d pale blue. This colour varies quite markedly from the pale blue that you see here, to a deep dull blue. 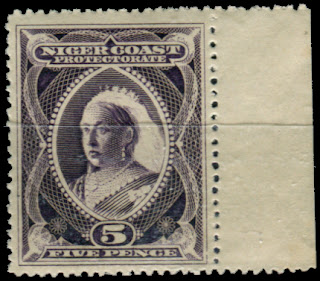 5d deep violet. The colour of this stamp varies from the deep violet above, to a deep purple, that contains more red, and is brighter. This is the only value for which Gibbons lists no perforation varieties, with the perforation being 141/2 to 15. The selvage tab illustrates very clearly the difference in the size of the perforating pins used to perforate the sheets: if you look carefully, you will see that six holes up from the bottom of the stamp, the holes become much larger. 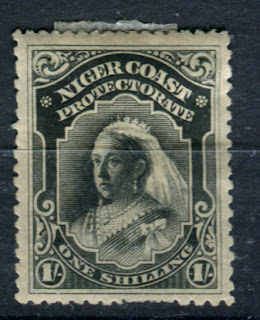 1/- black. I have a better looking example, which I will replace this image with, when I can locate it.
Well there you have a quick introduction to the first three issues of Niger Coast Protectorate, that are not the rare overprinted and surcharged issues. These are unfortunately so scarce and pricey, that I do not have any in my possession to show you. Hopefully that will change over the next several years. In my next post, I will show you the watermarked stamps, as well as some of the covers and postal history.