The First Six Postal History Items For My Exhibit..

In an earlier post, I mentioned that I wanted to depart a bit from my practice of writing about definitive sets, and take you through the process by which I am actually approaching my study of Nigerian stamps and postal history. I had decided that since I would be presenting an Exhibit at the November 2013 meeting of the West Africa Study Circle in London, that I would devote the next several posts to showing you the covers and postcards that I have selected for my exhibit. Each item has been selected either because I feel that the frankings are especially spectacular, the covers have been to unusual destinations, or there is some other feature of the cover that makes it especially interesting. When one collects postal history from this country for a while one becomes aware of how common covers to the USA or the UK are after about 1930. Prior to that, all covers are scarce. So without further ado, I present the first 6 items that I have selected, all from Lagos, during the reigns of Queen Victoria and King Edward VII: 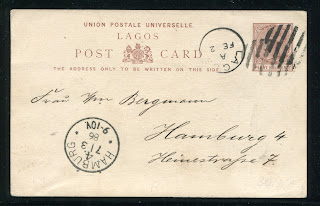 The first of these is a one and a half penny postcard, sent from Lagos on February 2, 1886 to Hamburg, Germany. This is an early date, as most of the postcards like this that I have in my collections are used between 1889-1893. Another point of interest is the Lagos postmark, showing the time code "A" and" FE 2", but no year date. This is a variation of the commonly seen CDS cancellation for this period (type D6 in Proud), which always has a year date. This one does not, which makes it unusual. 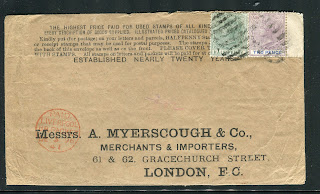 Here is an interesting and early business reply envelope with what appears to be a stamp dealer's advertisement at the top. Upon reading it, the advertisement tells the sender that they should use halfpenny stamps only and that they will be paid for the stamps on the letter. Presumably they wanted halfpenny stamps because they would have been easier to to use as packet material and they would have been more popular among collectors at the time. The red "Liverpool Packet" handstamp at the left indicates that the cover reached the UK on December 3, 1896, although the Lagos CDS on the back of the envelope is only partially complete, and the portion that would have shown the date is missing. The envelope has been franked with a 2d mauve and blue, and a single halfpenny stamp, paying the two and a half  penny rate to the UK, and the stamps have been tied to the cover by two strikes of the Proud type K5 oval obliterator. 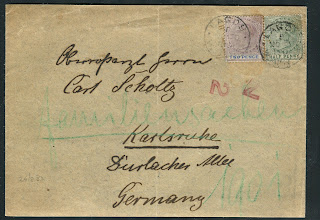 Here is a cover sent to Germany on November 30, 1901. This is after the death of Queen Victoria, so technically this is a KEVII cover. Franked with the same combination of stamps as the cover above, which shows that the rate probably applied to all of Europe. The stamps are tied to the cover with strikes of the Proud type D13 Lagos CDS cancellations. 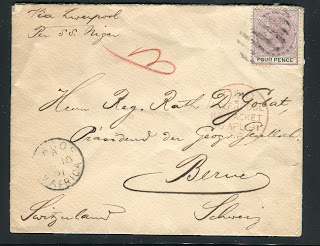 This cover was sent from Lagos on what was probably March 18, 1891 aboard the S.S. Niger, to Berne, Switzerland. The cover reached the UK on April 16, 1891 and Berne on April 18, 1891, judging from the backstamp date on the cover. I particularly love the penmanship displayed by the sender. The Lagos CDS is  Proud type D7, which was first used in 1873.The cover is franked with a lovely copy of the 4d bicolour, showing much deeper lilac colour than is normally seen on this stamp. I'd be interested to know exactly what the nature is of the red "3" marking at the top of the cover.i.e where was it applied, and what was it meant to indicate? 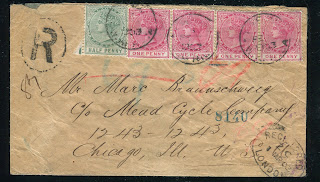 An early registered cover sent from Lagos in February 1903 to the Mead Cycle Company in Chicago Ill. Again, although the stamps on the cover are Queen Victoria, the cover is technically from the reign of King Edward VII. The cover bears an oval "R" registration mark (Proud type R5). The Lagos CDS is unclear, but appears to be Proud type D13, as on the third cover above. This was in fact the most common cancel of this period. The registration rate was 2d, which when added to the 2.5d postage rate, gave a total rate of 4.5d and this was paid with a strip of 4 1d carmine rose stamps and one halfpenny stamp.
My research indicates that Mead was a very prominent Chicago manufacturer of bicycles. Below is an example of a US postcard from 1914 showing an advertisement for their bicycles: 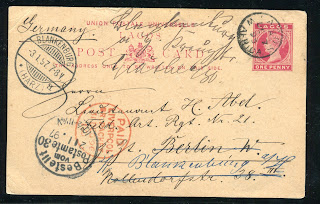 This is an example of the 1890's Lagos postcard, which is not that uncommon. However, what makes this one interesting is that it was re-directed. It was sent from Lagos on December 7, 1896, and was addressed to Lieutenant Abel in Berlin. The card arrived in Berlin on what appears to be January 2, 1897. It was re-directed to Blankenburg, arriving there on January 3, 1897.

I would very much appreciate any comments that you can offer about the above six covers.