The next major definitive issue that appeared after the death of King George VI was issued on September 1, 1953 and featured industry scenes from contemporary Nigeria, but in the form of stylized artists drawings. It is the last definitive issue to appear before independence in 1960. Either the Tudor crown, or the Queen's portrait appears off to one corner of the design. This is a very beautiful set, and serves as one of the better examples of Waterlow and Sons' work. Of all the major printers - De La Rue, Waterlow, and Bradbury Wilkinson, Waterlow's designs have tended to be my least favourite; perhaps because their frames are usually very simple. On this set though, the designs have been integrated into the frames seamlessly, which is very pleasing to the eye. Also, nearly all values are bi-coloured, which makes the colours pop nicely.

In common with other definitive issues that preceded this one, there are some points of interest for the specialist. There are shade variations on all values, although some of these are quite subtle, requiring a fair amount of patience to separate. In addition to shades, there are quite a few variations in the paper, both in terms of the weave direction, and the reaction under long-wave ultraviolet light. There were two booklets issued for this issue, as well as coils constructed from sheets and reels. In addition to these, there are several re-entries and plate retouches that can be found, although Gibbons has been slow to list them. Finally, the entire set exists overprinted "Cameroons U.K.T.T" for use in the Southern Cameroons region prior to the 1961 plebiscite, in which this region opted to join Cameroun. This later issue was first issued by overprinting stocks of the earlier Waterlow printings, but in 1961 the printing contract was lost by Waterlow and went to De La Rue, who re-printed several of the designs.

The designs and colours, as well as some shades follow:

1/2d Black and orange - Old Manilla Currency. This stamp is also found issued in coils and booklet panes of 4. A Manilla is an arm bracelet that was worn by the Igbo peoples who resided mainly in the Calabar region of Nigeria. They were often used as a form of money and came to be known as "Slave Trade Money" by European slave traders who used them to acquire slaves for trade in the Americas. 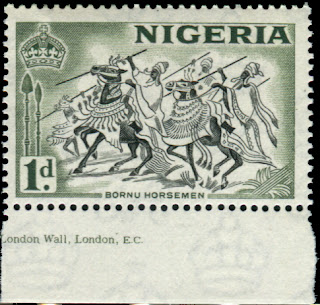 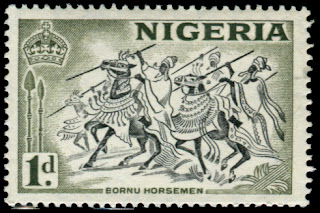 1d Black and bronze-green - Bornu Horsemen. The top stamp was one of the original Waterlow printings, while the bottom stamp was printed by Imprimerie Belge de Securite in Belgium late in 1958. The difference is quite apparent, both by the difference in colour, and the sharpness of the shading lines in the central vignette, which are sharp and clear on the Waterlow printing, and fuzzy on the later printing. This stamp was issued in coils as well as booklet panes of 4 stamps.
The Bornu horsemen are warriors from the northern Hausa peoples. They appeared frquently in the Northern towns like Kaduna in 1959 when the Northern regions were granted their autonomy, as shown in the following photograph capturing the festivities 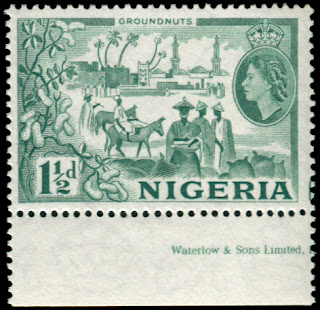 1.5d Groundnuts. We know them as peanuts of course. Groundnuts are a major staple in Nigeria and are widely used in cooking. Nigeria is one of the largest producers of groundnuts in Africa, and fresh groundnuts are quite unlike the stale peanuts that you or I are used to eating in North America. 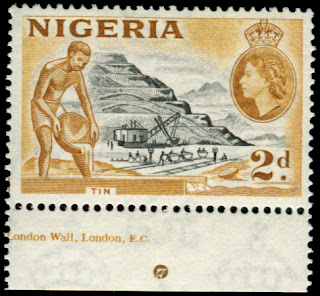 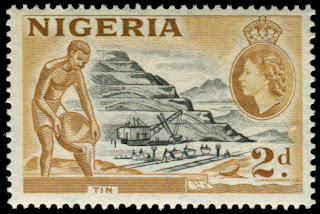 2d Black and yellow-ochre or ochre. The top stamp is the yellow-ochre from the original September 1953 printing, while the stamp below is the ochre shade from the August 1954 printing. This stamp is known with a  major re-entry in which the steps of the terracing on the mountainside show distinct doubling. I have yet to find one as they are quite rare.
Tin mining has been one of the country's largest industries in the early years of the country's history. In recent years though, there have been environmental concerns raised over the pollution of the country's waterways, as well as radioactive waste that results from the mining process. Historically much of the mining has taken place in the region of the Jos plateau. 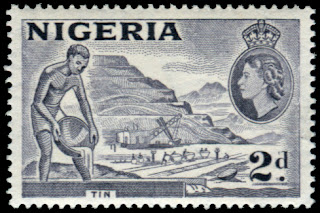 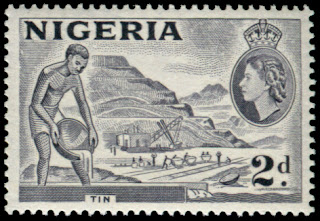 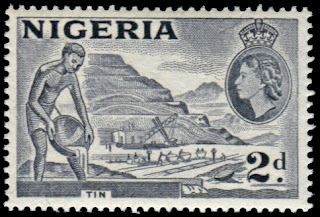 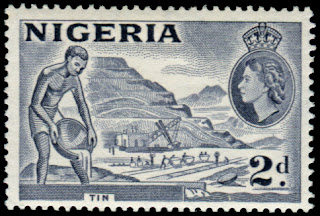 2d Slate-violet, grey, blue-grey and slate-blue - This monocoloured stamp, printed in Belgium replaced the bi-coloured 2d in July 1956. It is the most complicated stamp in the set, with two major die differences, numerous plate flaws and shades. The slate-blue and grey shades were available only in Nigeria and for this reason they are quite a bit scarcer than the other shades. This stamp was issued in coils and booklet panes of 4 stamps. 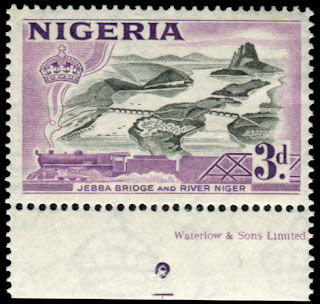 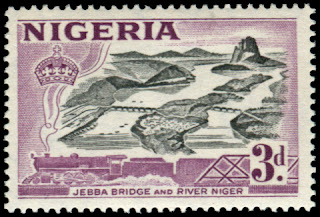 3d Black and purple - Jebba Bridge and River Niger - The top stamp was printed by Waterlow, while the bottom stamp was printed by Imprimerie Belge de Securite in September 1958. Like on the 1d, the main difference is in the clarity of the shading lines of the central vignette design. You can also see clear differences in the purple colour as well. This stamp was also printed in booklet panes of 4. 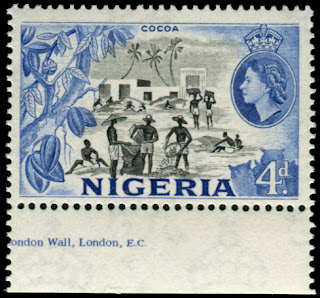 4d Black and blue - cocoa industry. Nigeria is the fourth largest producer of cocoa in the world. The government had hoped in between 2011 and 2015 to double annual production to 700,000 metric tons per year. 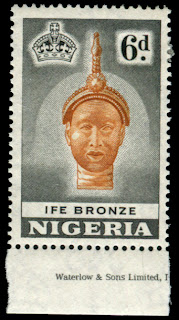 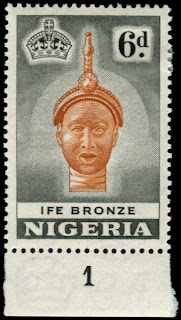 6d Orange-brown or chestnut and black - Ife Bronze. The top stamp is the original 1953 printing, while the bottom stamp is from the August 1954 printing. This bronze sculpture currently resides in the British Museum in London. I saw it when I visited the museum in 2010. It is a sculpture of the head of the king of the Ile-Ife peoples around the 12th century A.D. it is thought that Ile-Ife is the city that the Yoruba peoples originated from and was a thriving civilization between the 9th and 12th centuries. The city is 218 km northeast of Lagos. 1/- Black and maroon - timber industry. Timber historically was one of the country's largest industries, although now most of the wood produced is consumed locally, and poor management of the re-forestation process has resulted in demand placing much pressure on the sustainability of the industry in Nigeria. 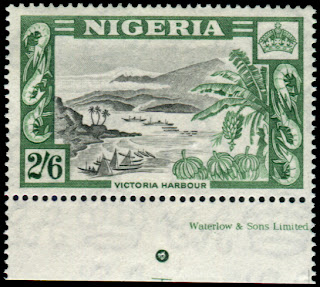 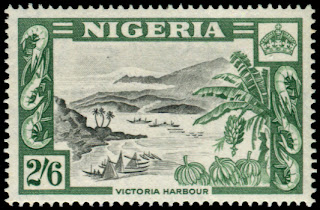 2/6d Black and green or deep green - Victoria Harbour. The top stamp is from the original 1953 printing, while the bottom one is from the August 1954 printing. The difference between the two is very subtle, but if you look closely you will see that the green colour on the top stamp has a yellowish cast, whereas the bottom stamp does not. Victoria Harbour is the main port in the city of Lagos, not to be confused with Victoria Harbour in Victoria British Columbia, or in Hong Kong. The stamp depicts prawns and bananas on the frames - two common food staples in the country. 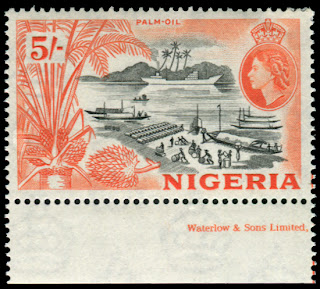 5/- Black and red-orange - palm oil industry. Palm oil is mostly used in cooking, and gives the foods made with it a very rich flavour. It contains a large amount of saturated fat, as evidenced by the fact that it is a solid at room temperature. It is also used by confectioners in the making of chocolate to give it a smooth, rich taste. 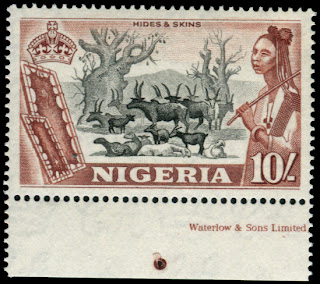 10/- Black and red-brown - hides and skins. This continues to be a thriving industry in Nigeria to this day, with Fulani traders coming to Lagos to sell cattle as well as hides in the local markets. 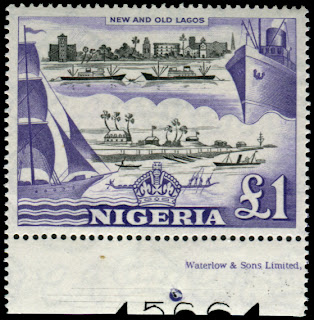 One Pound black and violet - new and Old Lagos. The bottom image is a view of Lagos from the mid 1800's before European settlement, and top image is a contemporary view of Lagos that is nothing like it appears today: 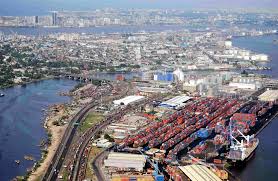 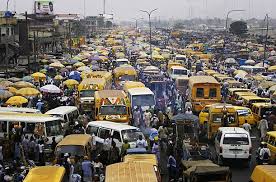 Although you have seen the Queen Victoria issues of Lagos, I have not yet shown you the issues of the other territories that eventually became Nigeria, like the Niger Coast Protectorate, Northern Nigeria, The Niger Company Territories, and Southern Nigeria.