This week, I will begin looking at the last regular stamp issue of the crown colony of Lagos: the Edward VII issue on the multiple crown CA watermarked paper.

This issue used the exact same colour scheme and designs as the previous one. The reason for its issue was that the Crown Agents adopted the use of a new type of watermarked paper containing a repeating pattern of crowns over the initials CA. The use of a repeating pattern meant that the paper could be used for any size of commonwealth stamp, and would result in less paper wastage. The previous paper required the plate to be properly aligned with the paper so that each stamp would get one watermark, and often for larger stamps, this meant a smaller sheet size and more paper wastage.

Initially, the first printings, which were made in July 1904, and which replaced the existing issue in October that year, were printed on unsurfaced medium wove paper. all values were issued except for the 2.5d. The quantities printed were thus:

As you can see, although the 1/2d and 1d stamps are common, the total number printed is surprisingly low compared to the Queen Victoria stamps of the same denomination. The other values are much less common than one would think from looking at the catalogue values, and the three high values are all exactly the same scarcity, and yet their catalogue values differ quite widely, which is strange.
In 1905, the Crown Agents adopted a new chalk-surfaced paper in order to further prevent the cleaning and re-use of stamps. All the values including the 2.5d were reprinted on this paper, and in the case of the 1/2d, 1d and 6d there were two printings of each:
Curiously, the number of stamps printed for each of the three high values is exactly the same for each stamp, and compared to the ordinary paper. All the other stamps were printed in roughly the same quantities as the stamps on ordinary paper except the 1/2d, which is twice as common. Yet the catalogue values are almost the same. The issue dates for the chalky paper stamps were:
1/2d: March 12, 1906.
1d: September 21, 1905.
2d: September 25, 1906.
2.5d: October 13, 1905.
3d: August 2, 1906.
6d: March 1, 1906.
1/-: April 1906.
2/6d: October 21, 1906.
5/-: October 21, 1906.
10/- March 12, 1906.
Like the first issue, values above the 1/- in postally used condition are extremely scarce. Again, the green ink used to print the stamps was still doubly fugitive and in addition, you had the chalk surfacing, which is prone to damage on soaking and rubbing. So, nice used examples of the 2/6d, 5/- and 10/- are very scarce to rare, it not as rare a those of the previous issue.
Amalgamation of Lagos with Southern Nigeria occurred on February 16, 1906. As you can see, the vast majority of the stamps on chalky paper were not issued until after this date, and so technically they are stamps of Southern Nigeria, and not Lagos per se. Because of this date, and the fact that many of these stamps were later re-issued during temporary shortages of Southern Nigeria stamps, postmarks and postal history become very interesting. This is due to the fact that we have three distinct periods:
1. Use before amalgamation.
2. Use after amalgamation concurrent with the current King Edward VII stamps of Southern Nigeria.
3. Use in the later Edward VII period and early KGV period during shortages.
Later, we will indeed see many examples of the chalky paper stamps used between 1910 and 1914, well after they were issued and well after Southern Nigeria stamps had superseded the original issues.
The Basic Stamps and Shade Varieties - Ordinary Paper
Despite there being only one printing of each value on ordinary paper, there are some slight shade variations on the head plate colours and in some cases the duty plate. 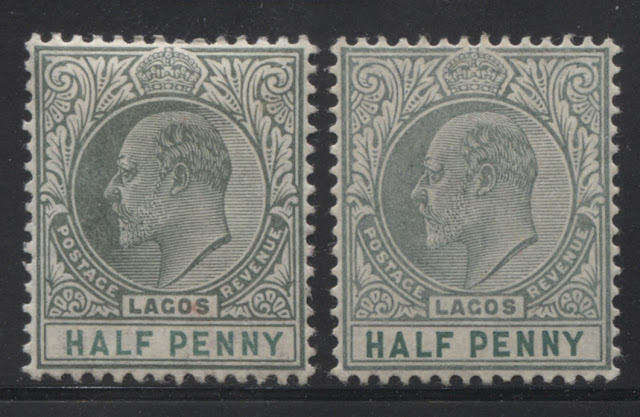 Here, there is a variation of both the head plate any duty plate colours. The left stamp is a deep dull green and green, while the one on the right is dull green and myrtle green. 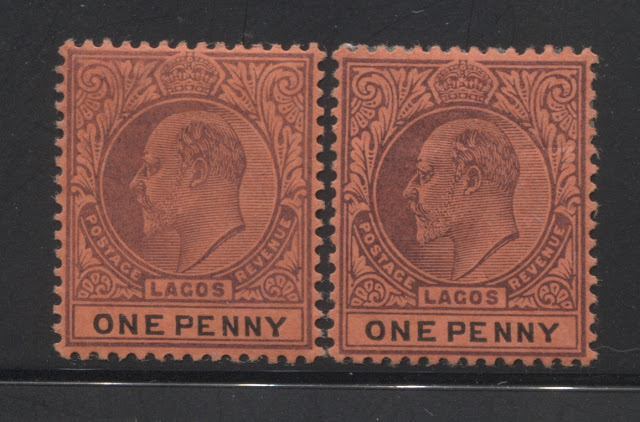 Here, there is a slight variation in the intensity of the head plate colour, with the right stamp being a deeper shade of purple than the stamp on the left. 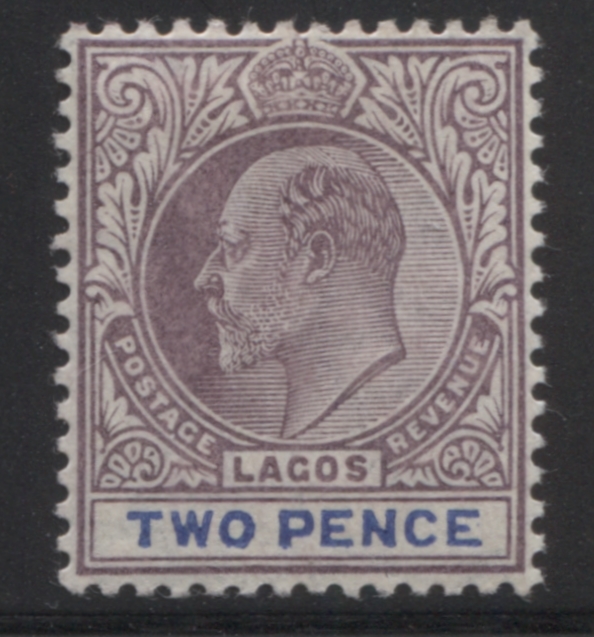 I have not found any significant shade varieties on the 2d value. It is generally printed in purple and royal blue. 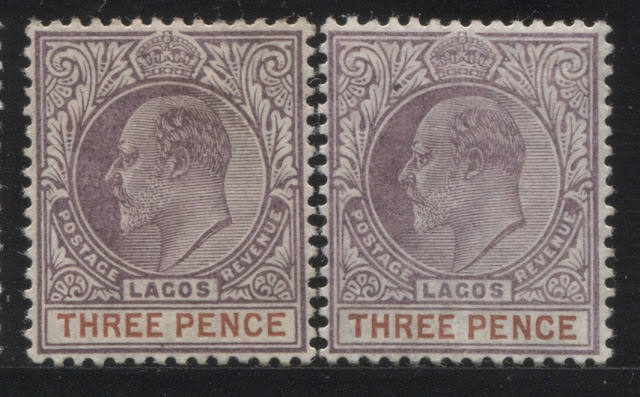 On this value, there is a very slight variation in the pale purple of the head plate. 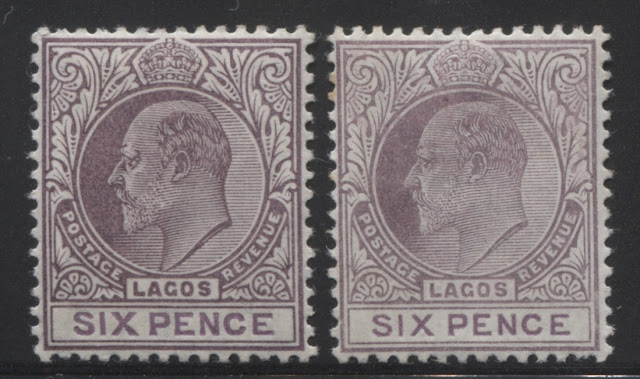 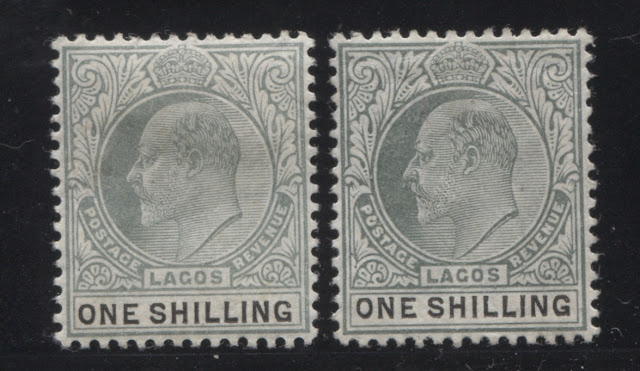 The one shilling value shows variation in the head plate colour, with the stamp on the left being a pale dull green and the right stamp being a deep dull green. 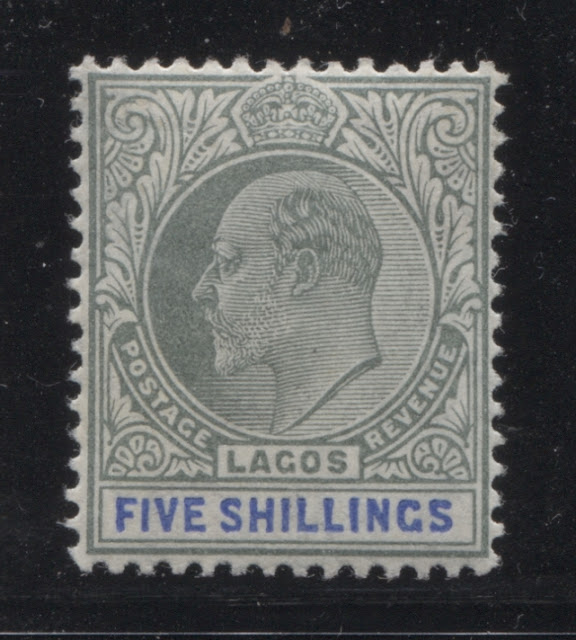 I haven't found any significant variation in the colour of the 5/- value. It is dull green and ultramarine. 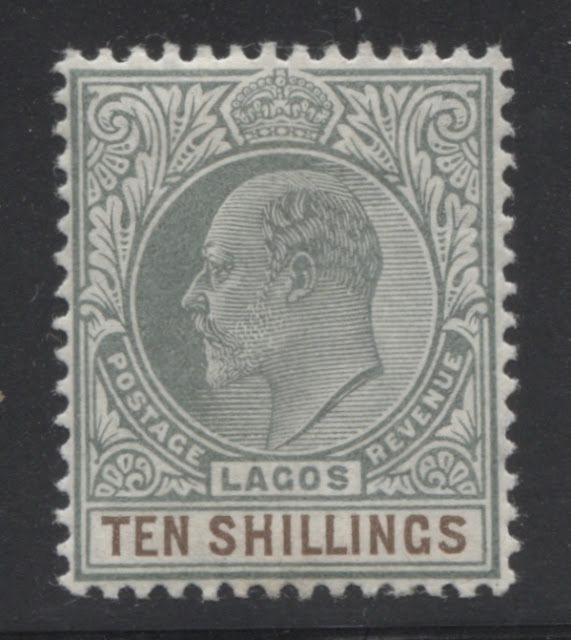 Likewise, I have found no variation in the colour of the 10/- value either. The colour is dull green and sepia brown.
The Basic Stamps and Shade Varieties - Chalky Paper
Most values on the chalky paper exhibit 2 or more shade variations of both head and duty plate. This does correspond to the fact that there were 2 printings of the 1/2d, 1d and 6d. However, they are found even on stamps that were known to have only one printing, which suggests the use of more the one batch of ink. 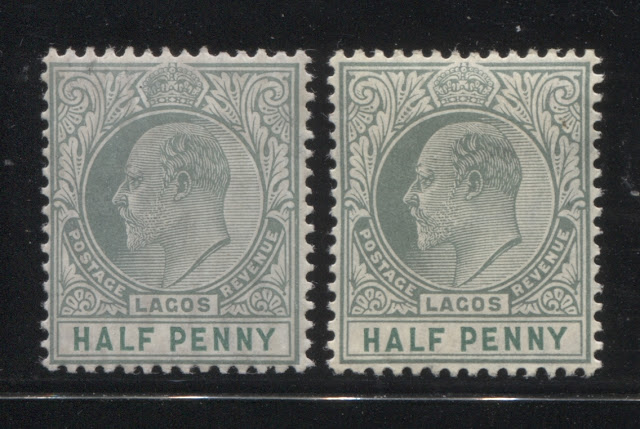 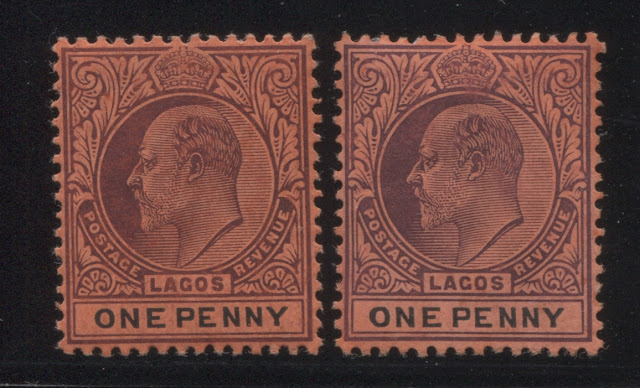 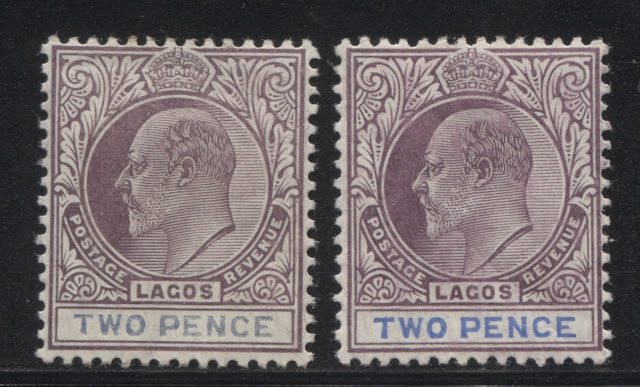 This is the most outstanding shade variation I have seen on a single printing stamp. Both head and duty plate colours vary, but the duty plate of both stamps are printed in entirely different colours. On the left we have a deep purple and grey-blue stamp. The normal shade combination is shown on the right, which is deep reddish purple and ultramarine. 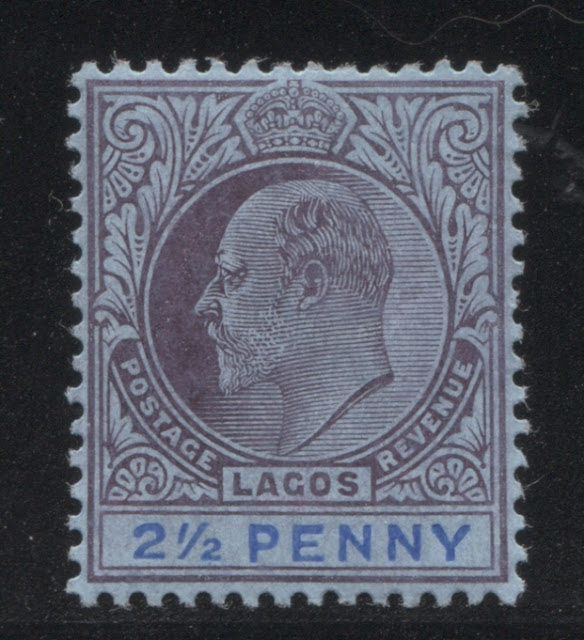 Here is an example of the type 1 duty plate with the smaller letters. 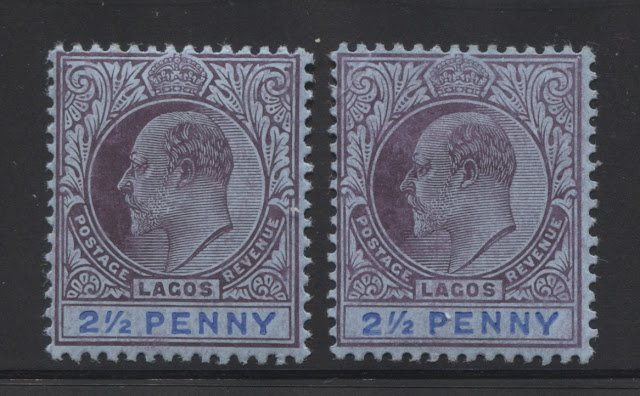 The type 2 stamps with larger letters can be found in shades of deep purple and deep reddish purple. The blue colour of the paper is fairly consistent. 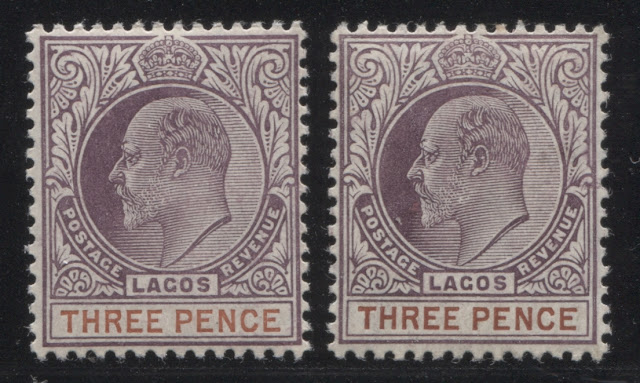 While the head plate colours are fairly consistent on the 3d, they duty plate colour varies from a chestnut colour on the left, to a deep lake-brown on the right.

The 6d shows the most variation, as it was printed twice. The duty plate colour is fairly consistent, but the head plate colour shows considerable variation from dull purple on the left, to pale reddish purple in the middle to deep purple on the right. 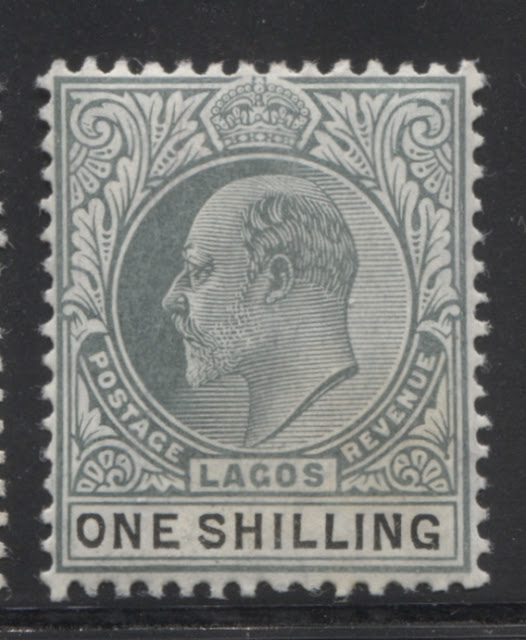 The 1/- value shows no significant variation that I can see. The colour is a deep dull bluish green. 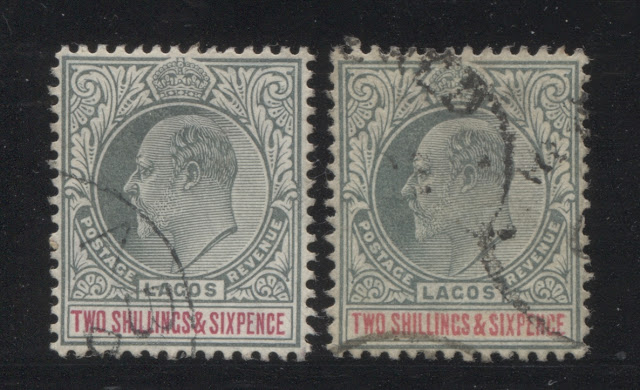 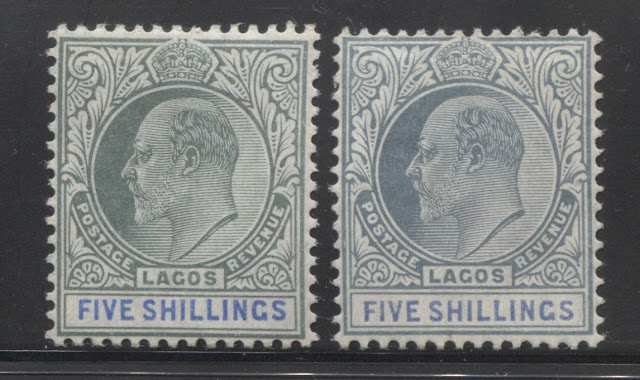 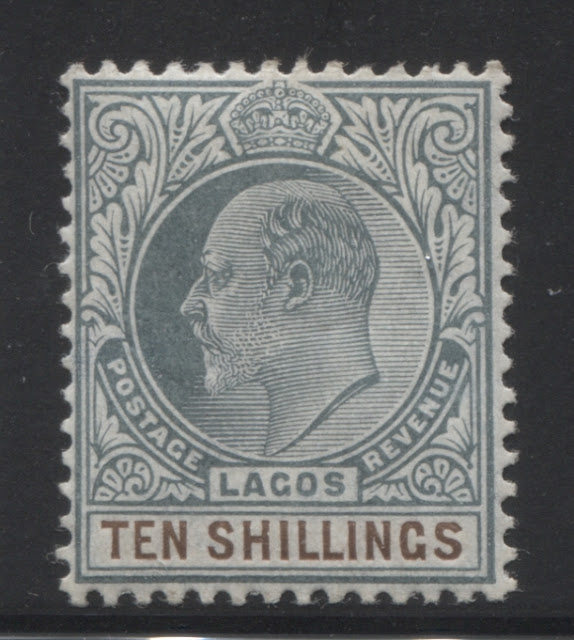 I have not seen any variation in the 10/- value. All of the stamps that I examines are dull green and sepia brown.
Inverted Watermarks
According to Ince, the 1/2d, 1d 2d and 1/- exist with inverted watermark. At present, I have the 2d on chalky paper, but none of the others. My example of the 2d is shown below: 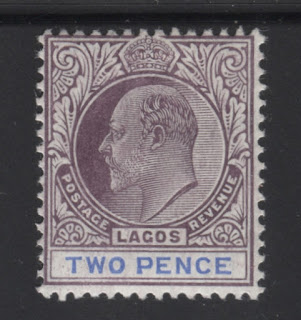 These stamps are extremely rare, as in all likelihood, no more than one or possibly 2 full sheets of 120 stamps were ever printed thus.
Plate Flaws
There are curiously few printing flaws on the stamps of this issue, though I have noticed two examples of the deformed "Y' of "Penny" on the 2.5d, which I first discussed on the previous issue. I have also found a prominent lower frame break on the 3d from the chalky paper printing. These two varieties are shown below.

The above scan shows two examples of the 2.5d that each show a clearly lopsided and deformed "Y" in "Penny". The Y is distorted and is not straight. A close up scan shows this distortion more clearly:

This variety was discussed in the post covering the stamps of the last issue, so it is fairly certain that it is a constant variety.

The next variety may or may not be constant, since I am seeing it for the first time, but it is a break in the lower frame of the 3d on chalky paper: 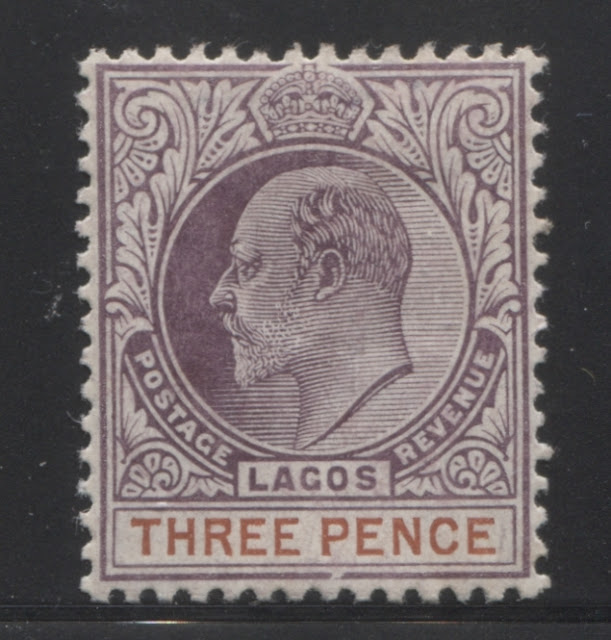 The break is very obvious and clear, even without enlargement. 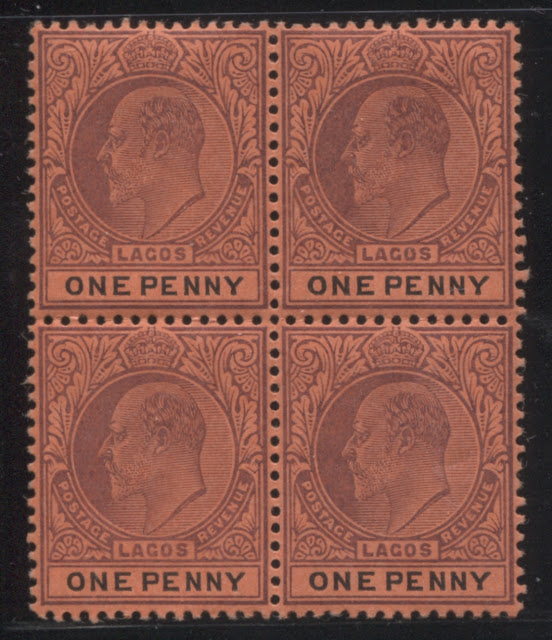 A block of 4 of the 1d on the ordinary paper. 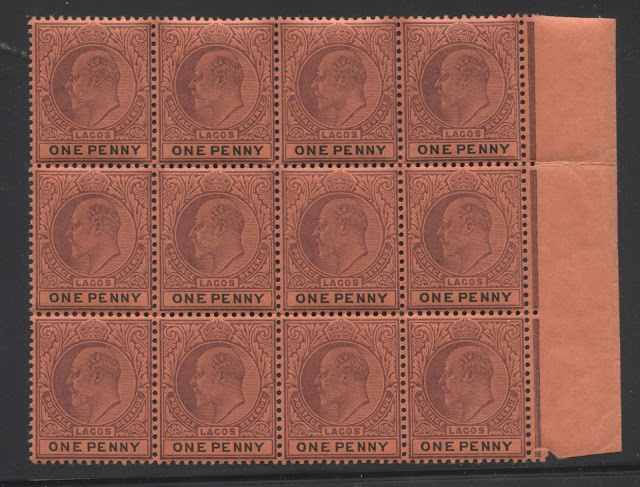 A sheet margin block of 12 of the same printing. 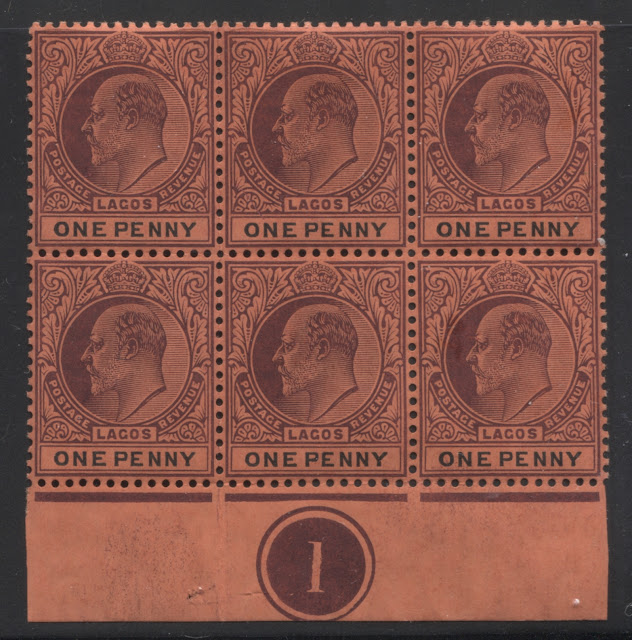 A plate block of the 1d on chalky paper. 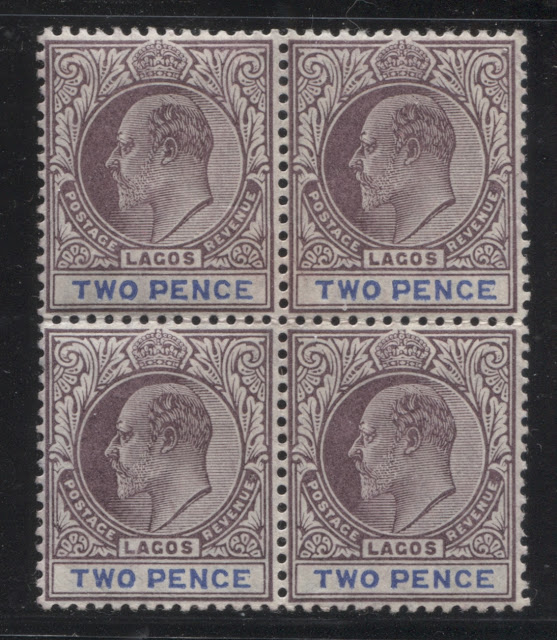 A nice block of the 2d on ordinary paper. 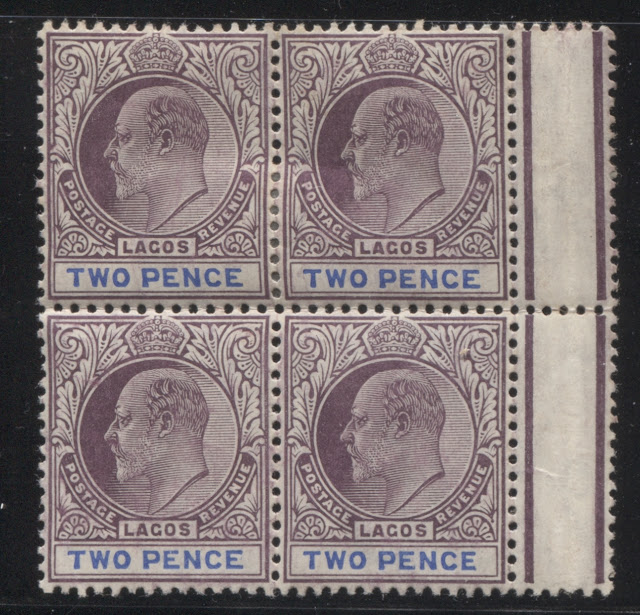 A block of the 2d on chalky paper showing the interpanneau gutter on the right. 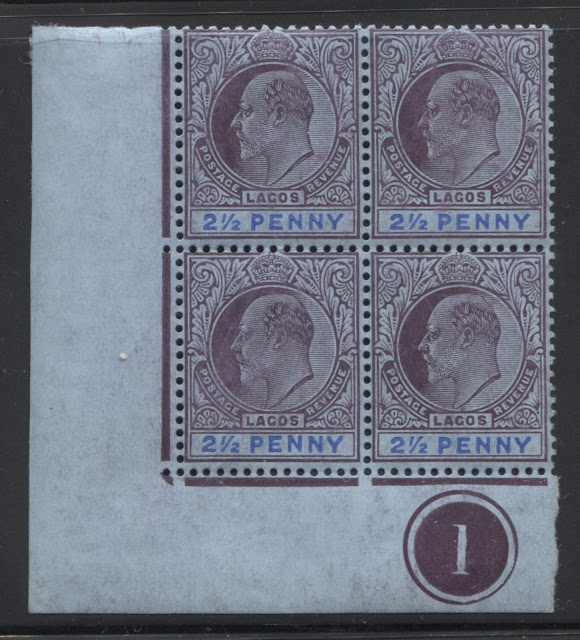 A lower left plate block of the 2.5d type 2 inscription. 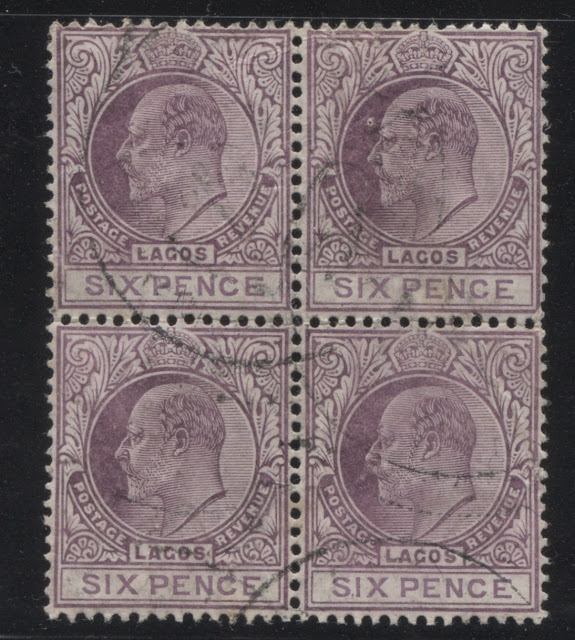 A used block of the 6d on chalky paper. The cancels are not readable, but used blocks are very scarce. 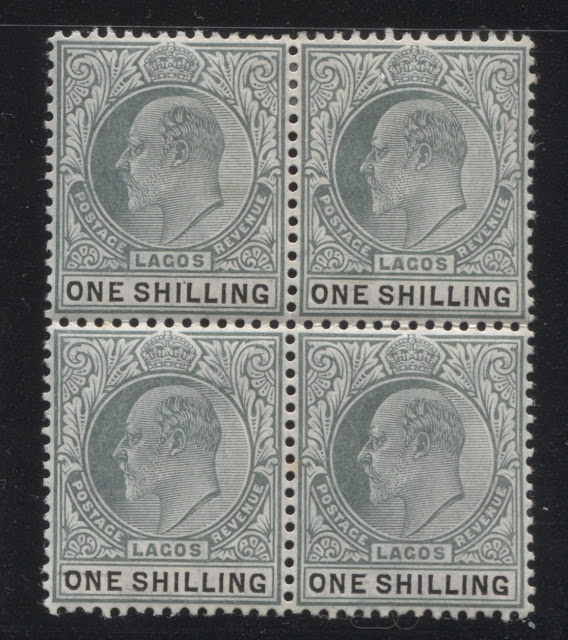 A nice block of the 1/- on chalky paper.
Specimens
All values of the set exist with specimen overprint, but I do not have any of them to show here.
This concludes the first part of my post about this issue. Next week, I will post about the cancellations of the issue. I will be running late next week, so my post will be short and will deal with only the pre-amalgamation period. It will be posted on Thursday next week instead of Tuesday as usual. So don't worry if you see no new posts on Tuesday evening next week!
Filed in: 1904-1905 Multiple Crown CA King Edward VII Issue of Lagos