In this post, I will show you six interesting covers that I have recently acquired. I have not yet decided whether or not to enter all of them into my November exhibit, but I thought that I would show you all of them and see if any of you can offer any comments on them: 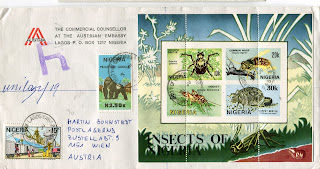 This first cover is my favourite. It features a complete souvenir sheet from the 1986 Insects issue, but with an added twist: the sheet is mis-perforated, with the horizontal perforations missing and the vertical perforations shifted in such a way as to bisect each stamp in the sheet. Most of the Nigerian stamps from the mid 1980's to the early 1990's exist mis-perforated and completely imperforate, from what were probably stocks of printers waste that somehow got out to the public. The backstamps indicate that the cover reached Vienna on July 8, 1992, which is just under six years after the issue came out. By western standards this is a very late usage that would almost certainly place the cover in the philatelic category. However, late usages of commemorative stamps are not unheard of in Nigeria, judging from the number that I have come across that are not philatelic. It would appear that Nigeria does not have the same withdrawal and destruction policy for unsold remainder stocks that the western countries have: stamps remain on hand at the post offices until sold. Because new issues are likely stacked on top of old sheets at the post offices, it is quite possible to have late usages that result from a stamp not being sold until well after its issue date.
In addition to this fact, the total postage paid was 3.5 Naira, which is consistent with other registered covers from this period. So it would appear to be a commercial cover. It is the first of only two covers that I have come across that feature commercial usage of a Nigerian souvenir sheet. Philatelic or not, this cover is simply spectacular in my humble opinion. 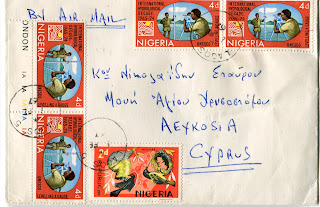 Here is a commercial cover sent from Lagos to Nicosia, Cyprus on February 1, 1967. Cyprus is a fairly exotic destination in that I have not seen very many covers from Nigeria to Cyprus, which makes it a cover of interest. The 1/6d first class airmail rate was paid with two pairs of the 4d Hydrological Decade issue, which came out on February 1, 1967, making this a First Day Cover! Additionally, there are no markings to indicate that it is a First Day Cover, and the haphazard arrangement of the stamps on the envelope supports the notion that it was not sent as an FDC, making it far more collectible. Finally, it is unusual to see covers from this period paid with a large number of low value stamps, given the relative abundance of 1/3d and 1/6d stamps with which to pay the rate. 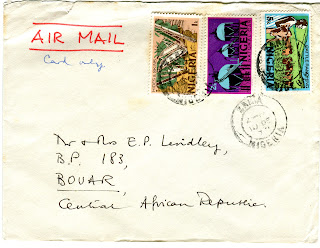 This cover from Zaria to Central African Republic is interesting to me for three reasons. The first is the destination - the first cover in thousands from this issue to the Central African Republic. Secondly, it is franked with 8k of postage, which seems quite low for an airmail cover sent on December 10, 1974, when first class airmail rates were 18k. The 8k is paid with three low value stamps - a mixture of the photogravure and lithographed definitives. The 1k and 5k are lithographed, while the 2k is the photogravure printing. The explanation for the low rate of postage appears to come from the missing backflap and the note below "Air Mail" in the upper corner that reads "card only". It is likely that the 8k represents an unsealed rate, with the backflap being removed from the envelope by the sender after inserting the card. 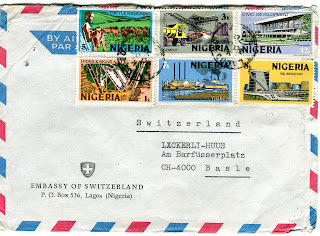 I like this cover sent from the Swiss Embassy in Lagos to Basle, Switzerland on October 30, 1975 mainly because of the combination of lithographed definitives that pay the double airmail rate of 36k The 12k and 7k values are not common on cover, so to get both on the same cover is quite nice. 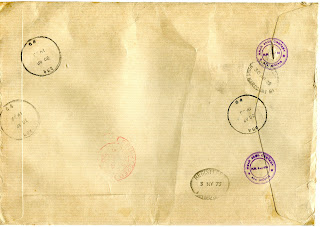 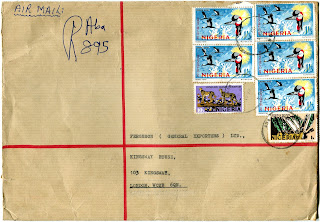 For this registered cover that was sent from Aba to London on April 30, 1973, I show both sides to illustrate the many points of interest. The first is that it is a mixed currency cover, in that the 74k  postage rate has been paid with five 1/3d Crown Bird stamps, and single 10k and 1k photogravure definitives.  The currency change from Sterling to Naira took effect on January 1, 1973, and so for a time, stamps of the old Sterling currency were accepted for use, rounded down to their nearest equivalent rate. For this purpose, 1/- was taken to equal 10k. Here, the five 1/3d stamps adds to 6/3, which would convert to 63k. The addition of the 10k and the 1k, making the total postage 74k. I think that the registration rate during this time was 20k, or at least that is what my study of many dozens of registered covers from this time seems to suggest. The first class airmail rate to the UK was 18k per ounce, so a three ounce cover would cost 18k x 3 = 54k. Add the registration fee of 20k and you get a total rate of 74k. So I think that this is a triple weight registered cover to the UK. The 1/3d from the NSP&M definitive issue is not a common stamp in used condition, so a cover with franked with five copies is quite a nice find.
The back of the cover provides a nice illustration of multiple backstamps and how these backstamps can show the route that a cover takes. Although there are several strikes, there are really five different handstamps on the back of this cover:
1. The company chop in violet, which although not clear, appears to read "Nmar Bros. Company, Aba Nigeria.
2. An Aba skeleton postmark, dated April 30, 1973 (not listed in Proud).
3. A Port Harcourt oval registered cancel dated April 30, 1973 (slightly different from Proud type R14).
4. A Lagos oval registered cancel dated May 3, 1973 that is similar to Proud type R51.
5. Red London registered receiving stamp dated May 5, 1973
All of these stamps indicate that the cover made the entire journey from Aba, a town 39 miles northeast of Port Harcourt, which is itself 270 miles east, southeast of Lagos, to London in 5 days. The longest portion of the journey was the 270 miles from Port Harcourt to Lagos! 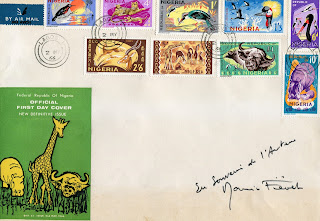 This last cover is a an official First Day Cover featuring the values of the 1965-1973 Wildlife Issue that were released on May 2, 1966. FDC's of this issue are seldom seen - this is the second one I have seen in almost four years, the first one slipping through my fingers on e-bay. I like this cover especially because it has been signed by the designer of the stamps, Maurice Fievet.
As always, I welcome your comments on these covers, as I am keen to learn as much about them as possible.