This week I will examine the printings of the 1d that were made from the third state of the plate. As I had stated in my first post about this value, there should be 5 printings of this value made between April 1894 and about April 1897. This translates into just over 1 printing a year. Consequently, the quantity printed with each of these releases should be much higher than the printings examined thus far.

In addition, this should mark the beginning of the end of the use of the earlier barred oval, and smaller 21 mm Lagos CDS postmarks. My examination of the 1/2d stamps from this period last week revealed that these early postmarks were still quite prevalent, and found on the majority of used stamps. So my expectation is that we will see the same thing with these stamps.

As it turned out I identified no fewer than what appeared to be 8 printings. Given that the total number of printings is known, this would mean that either some of the shades are really sub-shade varieties of the same printings, or some of my earlier printings were sub-varieties of printings made then. A careful look through the 8 groups of stamps identified here, revealed enough similarities that I can confidently group three of the identified printings with other printings, so that this group still consists of five printings. The mint stamps from the first group are all without gum, which suggests that this may be one of the printings that was waterlogged at sea. Ince documents this occurring with 10 sheets and 10 stamps of the very first printing that was received in April 1894.

This group of printings contains many noteworthy items:

These will be shown clearly in the remainder of this post.
As explained in the earlier posts, the third state of the plate is characterized by a loss of most of the finer detail in the hair at the back of the head, close to the neck, and the merging of the top hairlines in the hair above the crown.
Group 3: Printings 42-46 From the Third State of the Plate - April 1894 to About April 1897
Forty Second Printing
This first printing in this group is one which appears to have three, very close combinations of head and duty plate shades. The head plate shades are a very distinct, pale colour, which is much paler than any of the shades that follow on any of the other printings. The mint stamps can easily be identified by the lack of gum, as these were sent to the colony in April 1894, and as noted by Ince, 10 full sheets and 10 stamps were stuck together when received, and were likely soaked apart. 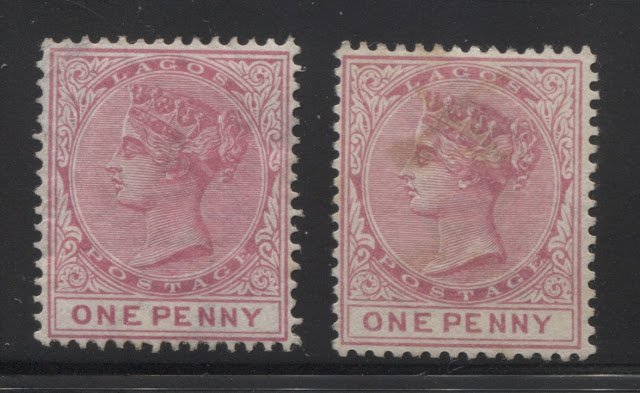 The above stamps show the first of the three shade combinations found on this printing. In this first combination, the head plate and duty plate colours are identical. It does not really match any of the swatches on the Gibbons colour key, but is closest to the rose-carmine swatch, if the colour were paler and bluer.

I have the two unused examples as shown above. The used example shown above, which is cancelled with a strike of an 8-bar oval obliterator, is printed in the third shade combination. In this combination, both the head plate and duty plate shade are slightly different, with the head plate colour being closest to Gibbons' rose carmine shade, but slightly paler, while the duty plate shade is an exact match to Gibbons' rose carmine.

The second stamp shown above shows an example of a spectacular constant plate flaw that I first encountered on the 1d lilac crown CA issue from 1882. It consists of a shortened first "N" of "Penny". Specifically, the upper right leg of the "N" is much shorter than the left leg. This is obvious even without the use of a magnifying glass. A close up scan is shown below: 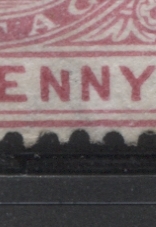 This must be a very rare variety, as this is only the second example I have seen among all of the 1d stamps that I have studied so far. It would appear that it may have originated with the crown CA printings of the 1d lilac stamps, because that is where I first saw it. However, it is entirely possible that it dates all the way back to the first crown CC issue of 1874, and that I simply do not have an example from that far back. This example does prove that the flaw was not corrected by 1894 and was constant.
Forty Third Printing
This is another printing which appears to have two very closely related shade combinations. In both cases, the duty plate colour is a much deeper shade than the head plate shade.

I have only one mint example, and four used examples, as shown above. Two of the used stamps appear to have been cancelled with an 8-bar oval obliterator. The other two used stamps are cancelled with what appear to be weak strikes of the 24 mm Lagos CDS cancellation that began to come into use during this period.

I also have two nice lower right corner sheet margin singles of this shade combination as well, as shown below: 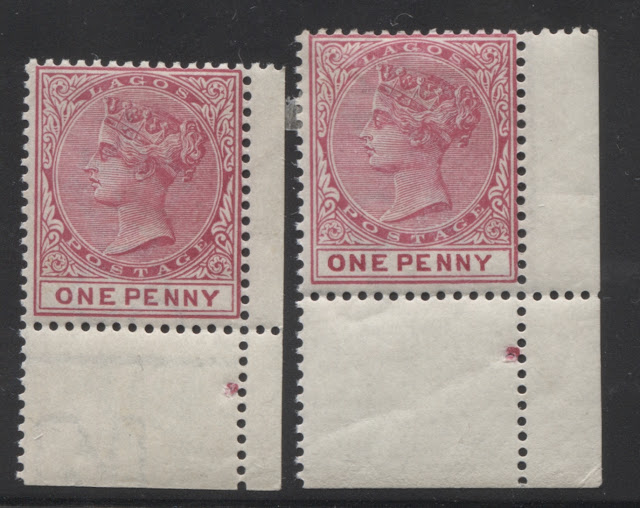 I also have a right sheet margin block, without jubilee line, which signifies that it is from plate 1, and showing portions of the "CROWN COLONIES" watermark that appeared in the right and left selvage of some sheets: 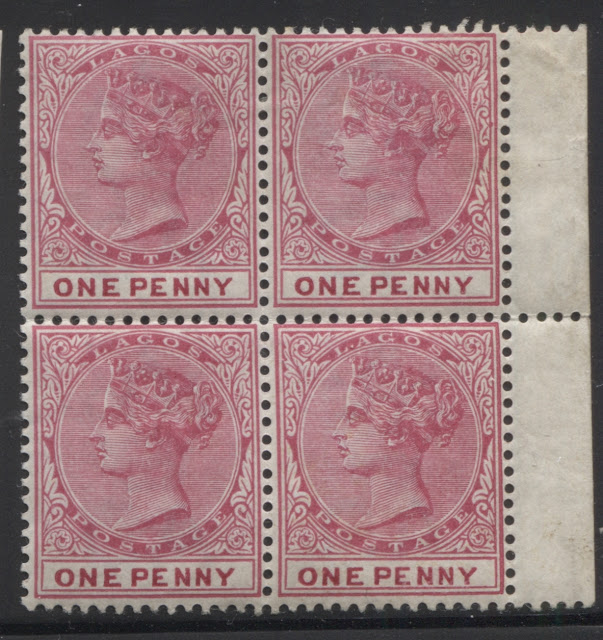 The watermark is sideways in the right selvage and reads downward. 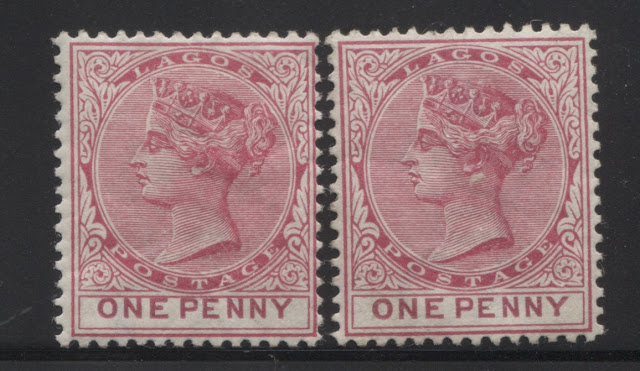 This scan shows the second shade combination for this printing, of which I have only the two mint examples shown above. The head plate colour is very close to Gibbons' bright carmine, while the duty plate colour is a spot on match to Gibbons' carmine lake.

Like the previous two printings, this one also appears to consist of two closely related shade combinations. 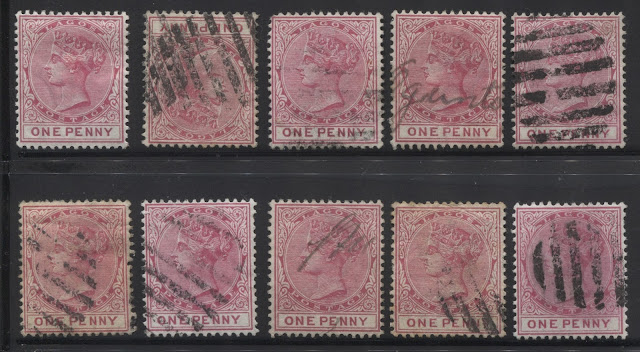 This scan shows the first of the two shade combinations in which this printing is found. In this first combination, the head plate shade is closest to the bright crimson on the Gibbons colour key, except that the colour is a little lighter and slightly less bright. The duty plate shade is a match to Gibbons' deep carmine.

Here I have one sole mint example and nine used examples. Of these, two are manuscript canceled and the remainder are all cancelled with barred oval obliterators. The upper right stamp is clearly an 8-bar oval, while the others appear to be 9-bar ovals, based on the narrow width of the bars in the cancellation. The manuscript cancels may actually be ownership signatures. As explained in Ince, there was an established practice in many of the colonies to retain a stock of stamps at the post office, for established customers who live far away from the post office, so that the customers would not have to venture to the post office every time they wanted to mail a letter. The postal clerk would sign the stamps with the customer's name, so that the clerks would know that the stamps belong to that customer, and would affix them to incoming mail that was collected by the mail carrier. So it is possible that these cancellations are actually examples of those markings. In any event, manuscript cancellations are quite scarce and seldom seen on these stamps.

The above scan shows the second shade combination in which the stamps of this printing are found. In this group, the head plate and duty plate colours are identical, and is closest to Gibbons' bright carmine shade.

I have three mint examples and one used example, which appears to have been cancelled with a 9-bar oval obliterator from Lagos.

The second stamp from the left shows another plate flaw involving the duty plate, which may or may not prove to be constant. It consists of a clear break in the middle of the vertical bar of the "E" of "Penny". A close up scan showing the flaw clearly is shown below: 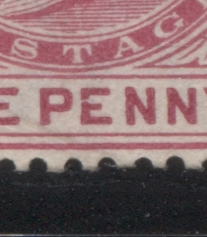 Although not as obvious as the short "N", this is still a significant flaw, in the sense that you can examine hundreds of stamps and not find any significant breaks in the lettering of the duty plate on any of the stamps you examine.

The above scan shows three used examples that I have from this shade combination. Two appear to be cancelled with the 21 mm Lagos CDS cancels, the middle stamp looks like an 8-bar oval obliterator. 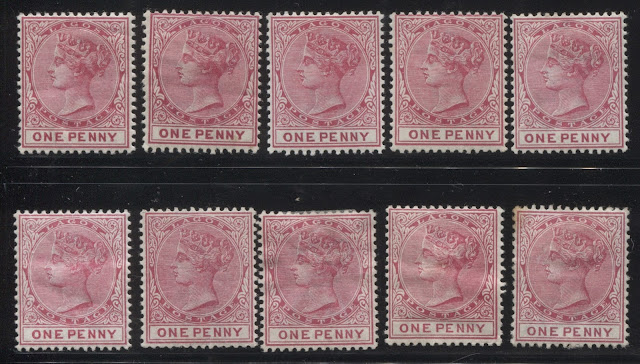 This last printing in the group is also the one for which I have the largest number of stamps, which is to be expected, given that the number of stamps sent to the colony increased with each subsequent printing after the shortage of low value stamps that occurred in 1893. Interestingly, very few of the stamps in this group are used, with the vast majority being mint.

For the stamps in the bottom row, the head plate colour and duty plate colour is a slightly paler version of bright crimson. 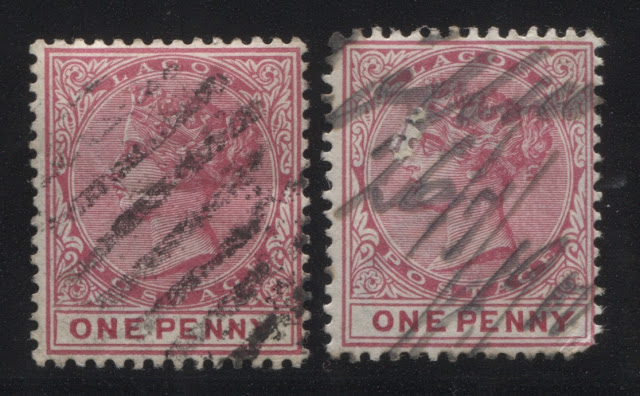 This scan shows two used examples of the first shade combination. The stamp on the left appears to be canceled with a strike of a 9-bar oval obliterator of Lagos, while the stamp on the right is cancelled with another manuscript cancel, that is dated July 26, 1900, which is about 3 years later than this period ends. I cannot quite read the cancel, but it appears to be "ojbiu" or "ofbiu". Neither place is reported in Proud, so I would greatly welcome any assistance that my readers can provide as to the origin of this cancellation. I am particularly interested as this may be a provisional cancellation from when Southern Nigeria became a colony and before hammers became available to all the post offices in the region. Most of these cancellations are dated in 1900, so this one may be one of those.

The above used strip of 5, from the first shade combination, is of great interest, as it is the only multiple of its size that I have encountered on this value. Generally the 1d stamps were only used as singles, given that other values were readily available to pay the higher postage rates. This would likely have been used to pay the 5d rate on a registered letter. The stamps are all cancelled with light strikes of the 8-bar oval cancellation of Lagos, which fell out of use late in 1898.
This brings me to the end of the printings from the third state of plate 1. Next week I will complete my examination of the 1/2d stamps from the fourth and fifth states of plate 1, and the stamps from plate 2. The following week, I will do the same for the 1d. This will then take me to the end of the 1887-1903 Crown CA issue. I will then do a post on the mint multiples that I have not illustrated in my previous posts, as well as another post dealing with the postal history from this issue, before I begin to tackle the King Edward VII issues of 1904-1906.
Filed in: Lagos - 1887-1903 Crown CA Issue