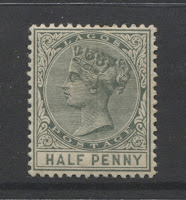 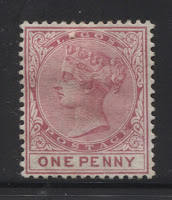 Today, I circle back and begin the arduous task of unraveling the tremendously complex labyrinth of printings for what were the two most commonly used stamps of Lagos between 1887 and 1904: the halfpenny green and the 1d carmine.

According to Ince, there were a staggering 42 printings of the halfpenny and 49 printings of the 1d carmine. Some of these were made before the introduction of the bicoloured series in March 1887, when the monocoloured crown CA stamps were first issued in 1884, and some were made after July 1901, when plate 1 had been retired and plate 2 was brought into use.

The breakdown of printings is as follows:

There are several implications of the above:


I have spent some time attempting to show you what the general characteristics of plate 2 are, as well as making a cursory attempt to identify the first printings of both stamps. My next task, now that I have studied the rest of the 1887-1903 issue in detail and I am familiar with the changes in plate state, gum, shade, paper and cancellation, I can begin making a serious attempt to study the 36 printings of the halfpenny and 38 printings of the one penny that were made between March 1887 and August 1902.

With all of this information, the next stage is to try and separate the stamps in my possession into different states of plate 1 and the plate 2 stamps. Based on my study of other stamps in the series, the states of the plate should cover the following periods:

Based on my hypothesis above, I would expect the following number of printings associated with each state:
In terms of used stamps, I should be able to place a great deal of reliance on dated cancellations to help me narrow down printings. The reason is that due to the very heavy demand for these stamps, there should not be very many late usages, if any at all. In fact given that there was a known shortage of the 1/2d stamp in 1893, there should not be any stamps issued prior to that date that were used after, because anything on hand from before that date at post offices would have been used up and sold long before. There might be some later usages in the later printings, but they should only be late by a matter of several months to a year or two at most, not 6 years or 8 years as we have seen with some of the higher values that saw much less frequent use.
So the first stage of my study, which will begin in earnest next week, will be to identify those stamps that are from the first state of the plate, and finalize my classification of those that were made before 1887 and between 1887 and 1890. So, stay tuned for my first post in this last series dealing with this issue. I have elected with these two values to tackle them both simultaneously, so that each post will deal with printings of each stamp, or if it is too large, it will deal with one stamp and then the other.