This week, I circle back and cover the printings of the halfpenny Queen Victoria keyplate stamp that were made between April 1890 and approximately January 1894. According to my notes in the first post I published on these stamps three weeks ago, there should be approximately 14 printings of this stamp made from the second state of the plate. This would correspond to just about 1 shipment every quarter during this period.

The second state of the plate, as I have noted in previous posts is very similar to the first state in the sense that all of the finer details of the design are still visible. However, it is in this state that we first start to see the beginnings of plate wear. So the very beginning of merging of the hair lines at the top of the head and at the back of the head, as well as some overall loss of sharpness.

In terms of cancellations, because of the period and the scarcity of late usages on these, nearly all of the cancellations should either be barred oval cancellations from Lagos or Ibadan, and 21 mm Lagos CDS cancels. There should not really be very many of the wider 24 mm Lagos CDS cancellations at all. Most stamps that appear to be from the first state dated 1902 or later are generally from plate 2. However, where I come across a stamp that shows some plate wear and canceled late like this, there is at least a possibility that it is a late usage from the second state of the plate. 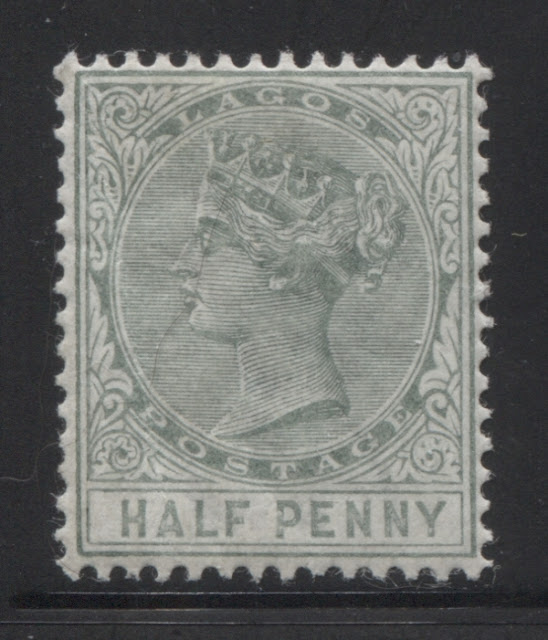 In this printing, the head plate and duty plate colours are both the same. The colour is closest to Gibbons's grey green, but this shade is quite a bit paler.
Twenty First Printing 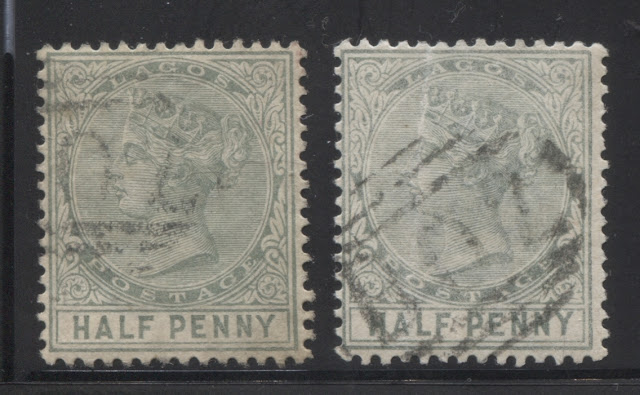 On this printing the head plate and duty plate colours are also identical. The shade is an even paler version of Gibbons's grey green. So I would call this the very pale grey green. I have only the above 2 used examples, which appear to be foreign usages, as they appear to be "701" barred numeral cancellations. This cancellation was not used in Lagos during this time. It is likely that this is a Great Britain cancellation that was applied when the letter, to which these stamps were affixed, reached England. 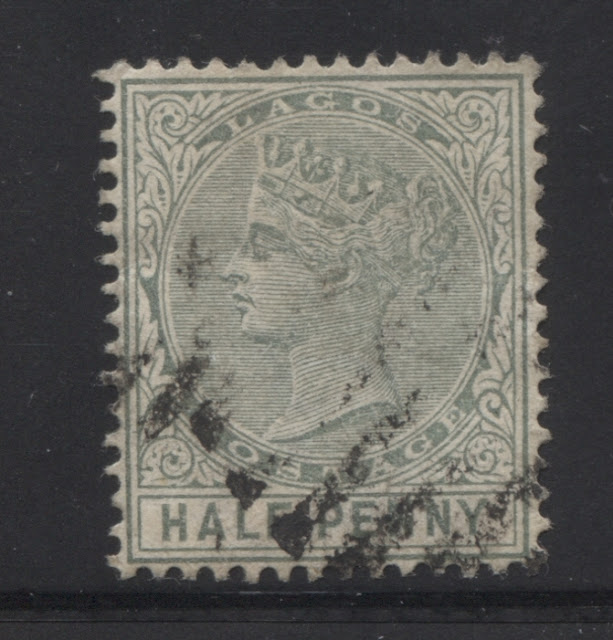 The head and duty plate colours of this printing are also identical, and are a very close match to Gibbons's grey green shade.
Twenty Third Printing

The head plate and duty plate colour of this printing are both closest to Gibbons's dull blue green, but a little paler and duller. It is nowhere deep enough to be a shade of the grey green. I have the three mint examples shown above, two of which have no gum, and may be from one of the printings that was immersed in seawater during the trip to Lagos, in 1892.

The head and duty plate colours of this printing, once again, are identical, and are closest to Gibbons' deep green shade. I have two unused examples without gum, and two used examples, which are cancelled with what appear to be strikes of the 9-bar oval obliterator of Lagos. Again, these mint stamps without gum may be from one of the waterlogged shipments that was received by the colony in 1892. 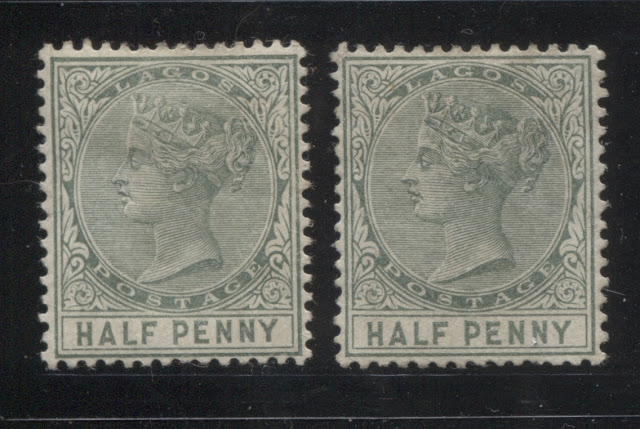 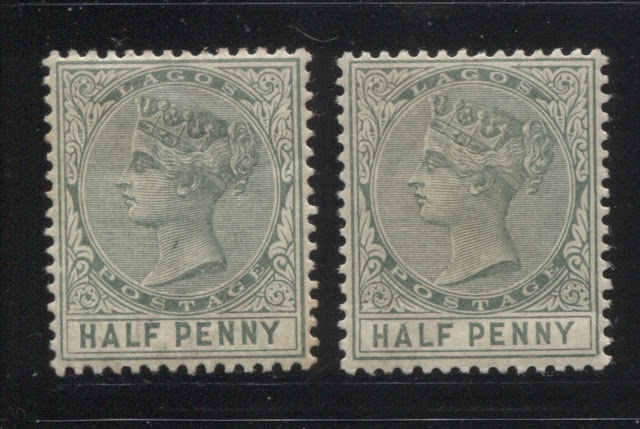 The head plate and duty plate colour are both identical in this printing also. The colour is similar to the deep dull green, but here there is a milky, bluish undertone to the colour, that prevents it from being a good match to the deep dull green. It is greener though than Gibbons's dull blue green. So I would call this the deep dull bluish green, which denotes a deep dull green that contains a very small amount of blue. I have two mint examples, with full gum, as shown above.

I have a single mint example as shown above, and two used examples. Both used stamps appear to have been cancelled with strikes of the 9-bar Lagos oval obliterators. 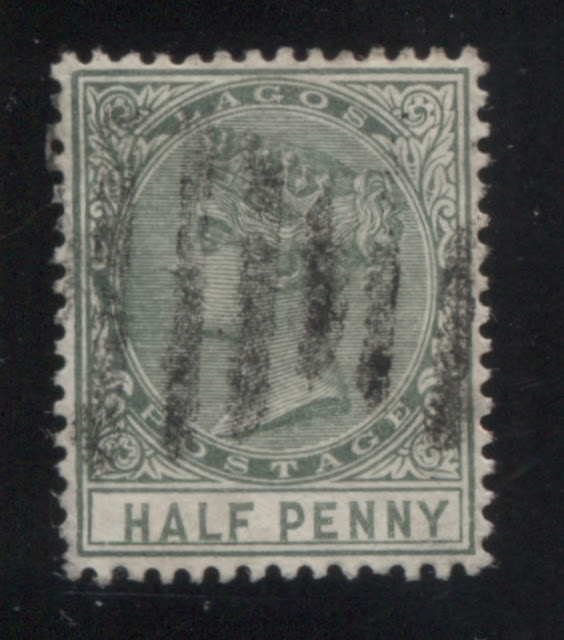 The head and duty plate colours of this printing are again identical. This time, the colour is closest to Gibbons's deep grey green. In addition to the above used example, which is cancelled, with what appears to be an 8-bar oval obliterator, I have the lovely mint block of 6, as shown below: 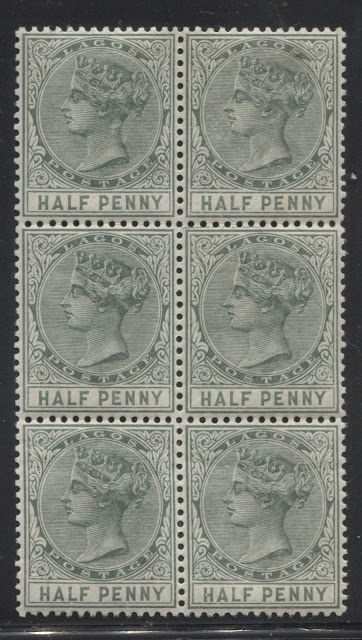 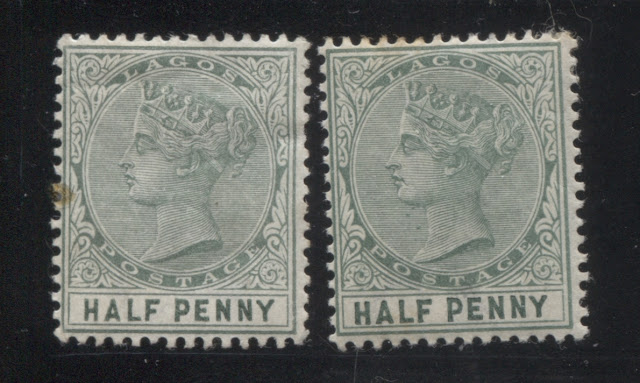 This is the second printing in this group of printings to have a completely different colour for the head plate, and the duty plate. The first printing to have different colours was the 27th printing, but there it was a case of two different intensities of the same colour. Here, the colours are completely different. The head plate is closest in shade to Gibbons' dull blue green, but this colour is slightly brighter, and contains more green than the dull blue green does. The duty plate colour is closest to Gibbons's bottle green.

I have the two mint examples shown above, and no used examples. 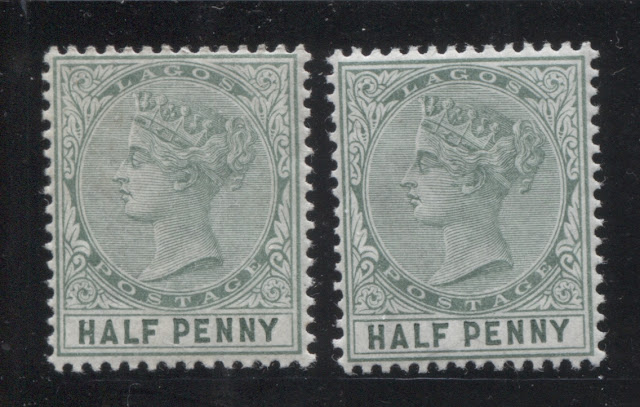 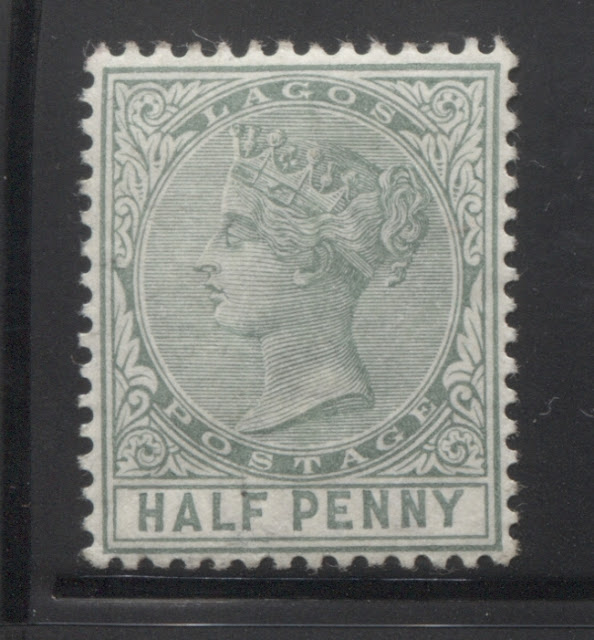 The head plate colour and duty plate colour of this printing have gone back to being identical. In this case the colour is a very close match to Gibbons's dull blue green. The only exception is that this colour is slightly paler.

The head and duty plate colour of this printing is is very similar to the last in that it is closest to Gibbons'd dull blue green. Only here, the colour is just a touch brighter than the colour on the 31st printing.

I have three mint examples of this printing, as shown above, and seven used examples, as shown below: 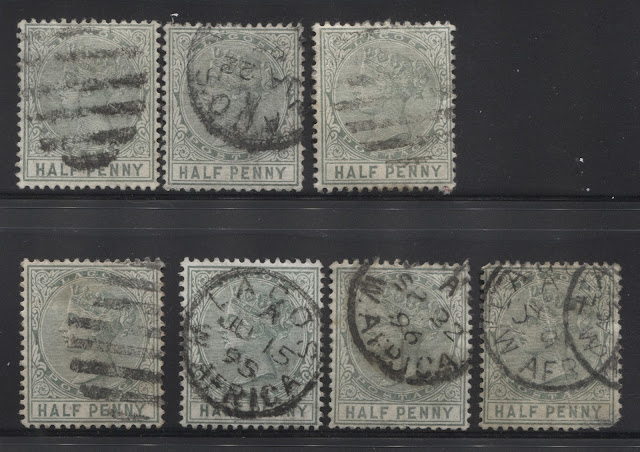 The top left stamp appears to be a Lagos 8-bar oval obliterator, while the stamp below it, and the top right stamps, appear to be strikes of the 9-bar oval. The remaining stamps are all cancelled with 21 mm Lagos cancellations dated between July 15, 1895 and September 22, 1896. There is a possibility that the top centre stamp and bottom right stamp are dated before this, but unfortunately, the dates are not fully readable. The two middle stamps on the bottom row show the wider 4 mm spacing between "W" and "Africa" in the cancellation, while the stamp at bottom right shows the 3 mm spacing.

So this concludes my discussion of these 14 printings. Next week, I will look at the same group of printings for the 1d carmine, of which there should also have been 14 printings, as well.
Filed in: Lagos - 1887-1903 Crown CA Issue