Last week I looked at the 14 printings of the 1/2d green Queen Victoria keyplate stamp of Lagos, that were printed from the second state of the plate. By my figuring, there should have been 14 printings of this stamp also that would have been made between about April 1890 and January 1894. This week it is time to look at those printings in detail. Based on the Crown Agent's practice of supplying stamps to the colony on a quarterly basis, this would translate into approximately one shipment per quarter during this period.

As I have noted in many other posts about this issue, there should be very few to no late usages of these stamps, due to the very modest number of remainders that were sent back to London for destruction in 1904. Of these, it would appear that nearly all would have come from the last printings made from plate 2. Therefore any stamp that has the characteristics of the second state, but cancelled after 1900 is most likely a stamp from plate 2, rather than plate 1.

The cancellations that I expect to see during this period are, once again, the 8 and 9 bar oval cancellations of Lagos, the 10 bar oval of Ibadan and the two types of 21 mm Lagos CDS. It is a little too early to see the 24 mm Lagos CDS cancellation, though it is possible to see a few of the later printings from this state used late, so that they just fall into the period when this later cancellation began to be used.

I have found one interesting and possibly constant plate flaw among the printings in this group: a frame break above the "N" of "Penny", which I will illustrate in this post. Lastly, the rare inverted watermark, which is listed in Gibbons, makes its first appearance among the stamps in this group.

Lastly, based on the paper, gum and shade characteristics of the printings in this group, I now have some doubts about whether the three printings identified as 25, 26 and 27 two weeks ago are actually from plate 1. It would appear that they might actually be from plate 2 instead. But for now, I will leave them where they are and classify these stamps as printings 28 to 41. 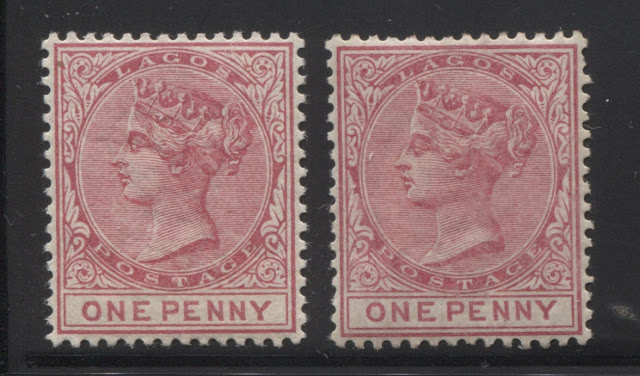 For this printing, both the head and duty plate colours are identical. The closest match on the Gibbons colour key is to rose-carmine, except that the colour here is slightly deeper than the rose carmine swatch. I do not have any used examples of this printing, but just the two mint examples shown above. 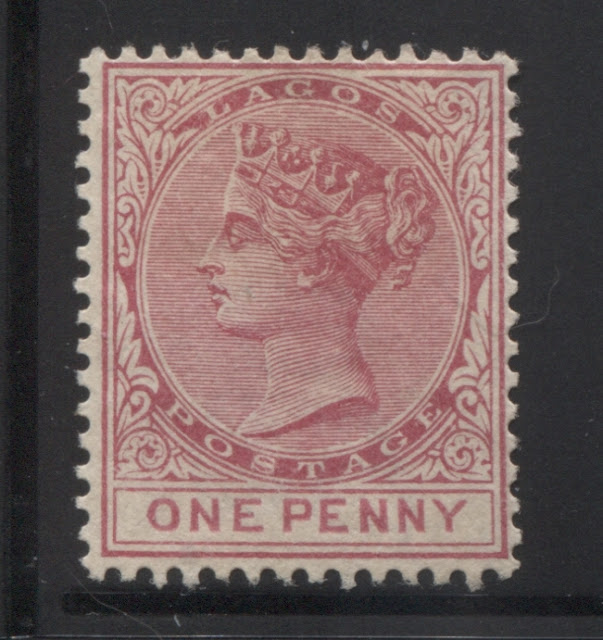 The head plate and duty plate colours of this printing are closest to carmine-lake on the Gibbons colour key, with the colour here being just a little bit lighter than shown on the colour key. The sole mint example I have above is unused without gum.
Thirtieth Printing

This is the first printing in this group for which I have both mint and used examples, as well as a mint example of the rare inverted watermark. Again, the head and duty plate colours are identical, and are closest to rose-carmine on the Gibbons colour key, being a near perfect match.

I have two mint examples, one with inverted watermark as shown above, and two used examples. The used stamps are both cancelled with 21 mm Lagos CDS cancels, one of which is the type with the 4 mm gap between the "L" of "Lagos" and the "W" of "W. Africa". This cancel is dated January 18, 1892, which would seem to be a few months after this printing would have been dispatched from London. 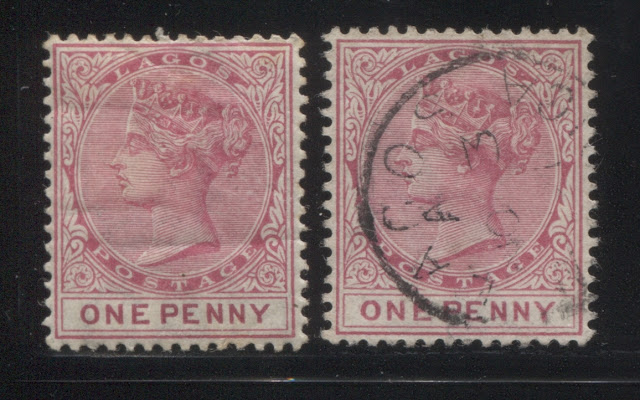 I have the one mint example shown above, and one used example cancelled with a 21 mm Lagos CDS, which appears to be dated in November 1891, which is a few months after it should have been issued.

The mint example here shows a clear break of the inner frameline, just below the first "N" of "Penny". This is significant, because the quality of the printing was so high on De La Rue keyplates, that there are very few such varieties out of all the stamps I have studied. However, this variety is not listed in Gibbons. So I do not know if it is constant or not, though I do recall seeing similar frame breaks on other values, so that it very well might be a constant variety.

A close up scan is shown below: 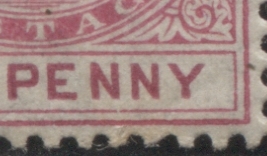 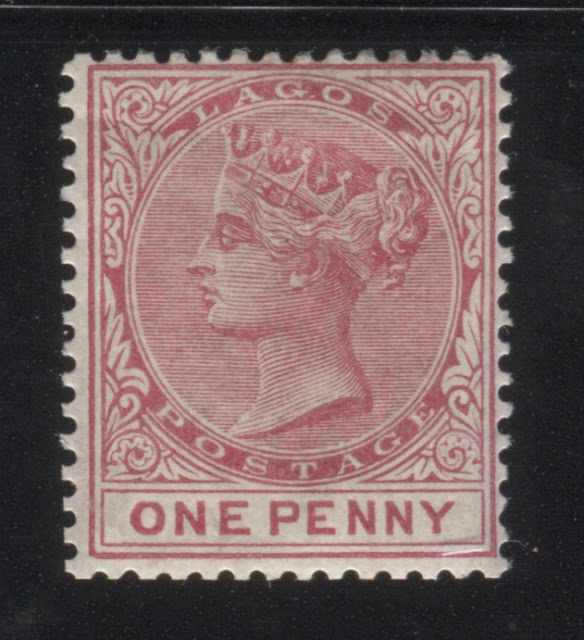 I have two mint examples as shown above, and one used example with an unusual "checkmark" cancel. 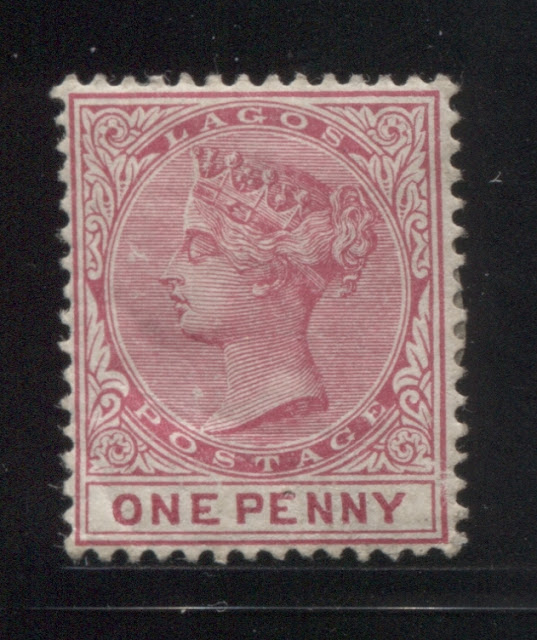 I have only the one mint example, and three used examples, all of which are cancelled with either 9 or 10 bar oval obliterators. There is not enough of any cancellation visible, for me to be certain as to whether or not they are 9 or 10 bars. However, the bars are thin enough that I can be pretty certain that they are not 8-bar ovals.

I found another used example that I had overlooked when I originally wrote this post, that has a 21 mm Lagos CDS, dated June 24, 1892. This cancel has the 3 mm gap between the "W" and the "A" of Africa. A scan is shown below: 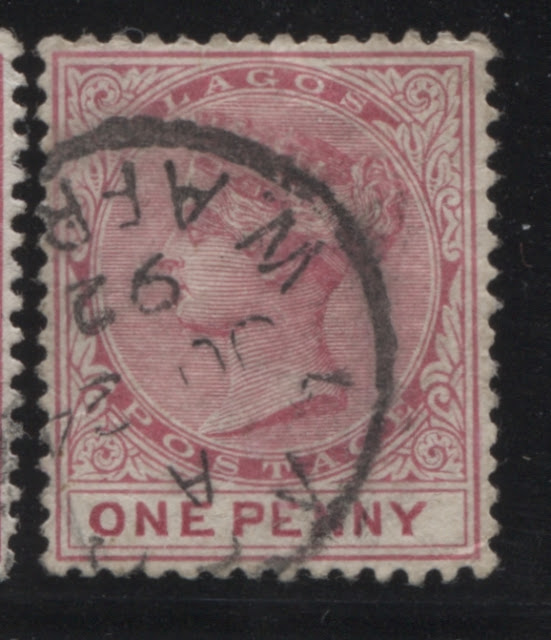 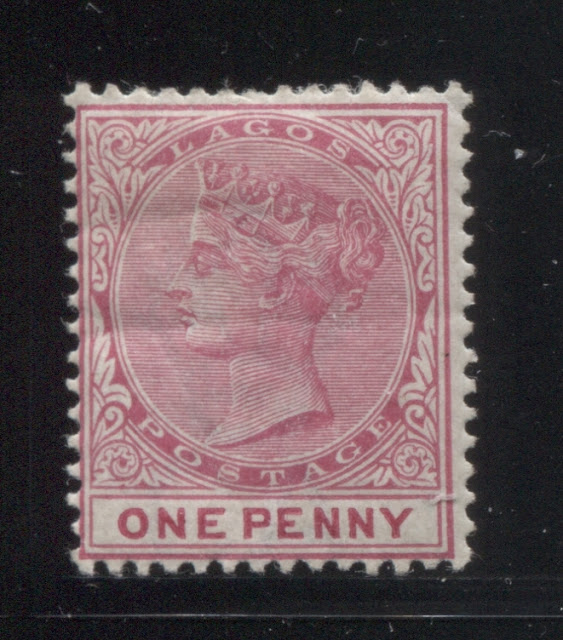 The head plate colour of this printing is pale, bright crimson, while the duty plate colour is bright carmine.
Thirty Seventh Printing 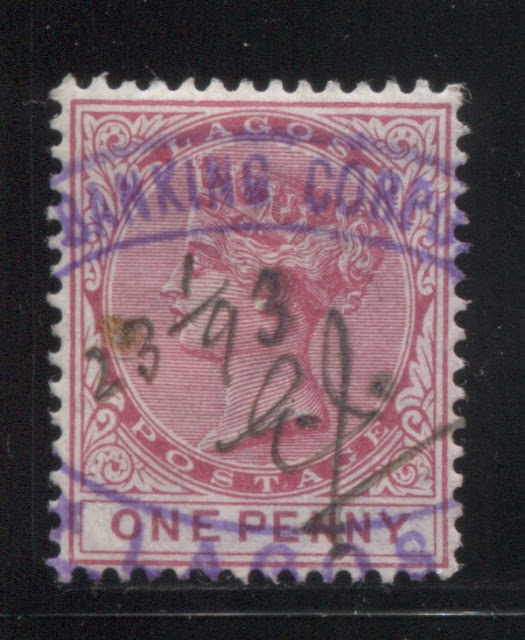 The head plate colour of this printing is closest to bright crimson as shown on the Gibbons colour key. This colour though is a little more subdued, but is much brighter than any of the carmine shades. The duty plate colour is a little deeper than the carmine shade, but not as deep as the deep carmine. Therefore, I would call it the deeper carmine.
This is the only fiscally used example of this stamp that I have come across. It was not intended for use as a revenue, as can be seen from the fact that the stamp is only inscribed "postage", and not "Postage and Revenue". But it has been cancelled with an oval banking cancellation, which is dated in manuscript, January 23, 1893, which would be just a few months after it's issue. 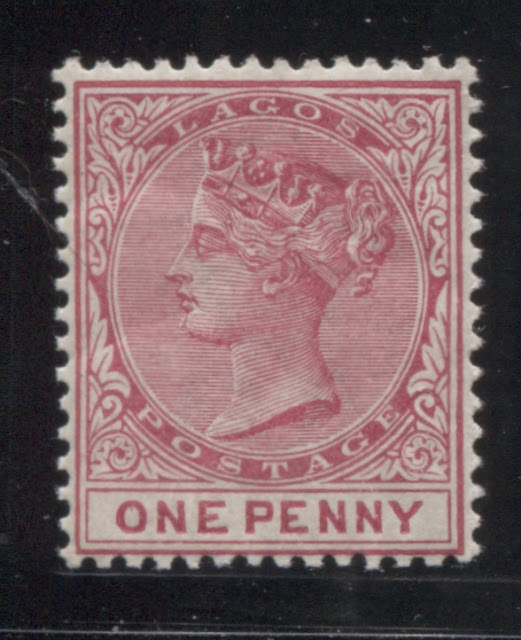 On this printing, the head plate and duty plate colours are the same, and are closest to the basic carmine shade on the Gibbons colour key, with this one being just a touch brighter.
As it turns out, I actually do have a used example of this stamp, which I had overlooked when I originally wrote this post. It has a clear 21 mm Lagos CDS, with the 3 mm gap between the "W" and the "A" of Africa, dated June 23, 1892. This is squarely within the time period covered by this group of printings. A scan of this very attractive stamp is shown below: 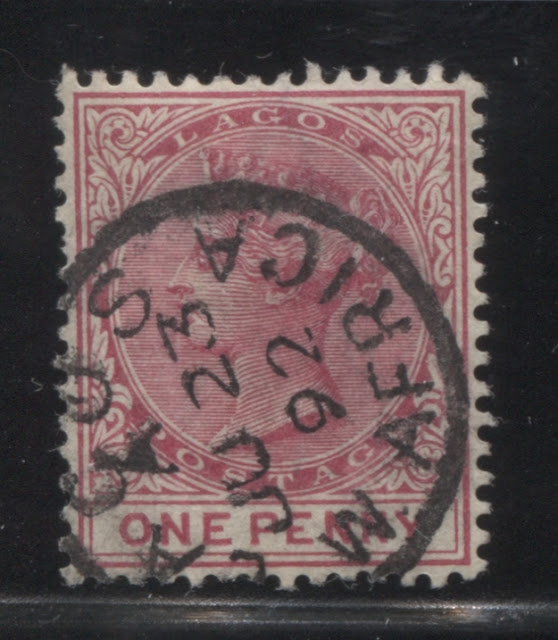 I have a lovely block of six mint stamps in this shade, which I had originally thought was from the third state of the plate. However, it has most of the characteristics of the second state and the colours are a match to the above stamp. Consequently I have classified it as part of this printing. A scan of this block is shown below: 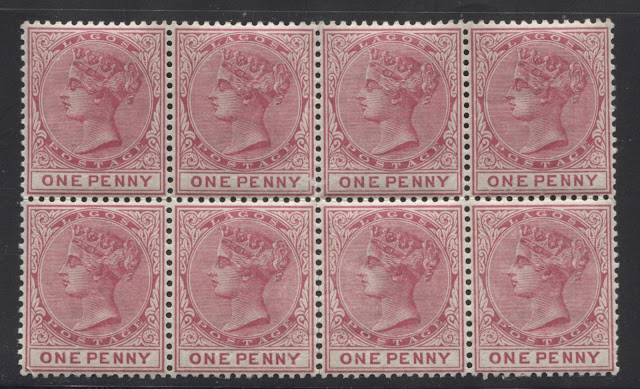 The head plate colours are the same as the duty plate colours on this printing, and is a cross between the bright carmine and bright crimson swatches on the Stanley Gibbons colour key.
I have no used examples of this printing, but just the four mint examples shown above.
Fortieth Printing

Again, I have no used examples and four mint examples.

Again, I have only mint examples of this printing.