After almost 2 months spent moving house again and doing everything but working on my stamps, I have finally found the time to begin posting the first part of my London postal history exhibit.
Group 1 – Covers 1-6 Lagos Covers – Universal Postal Union Rates – 1888-1903
The first six covers in the exhibit are examples of single rate letters, sent when the postal rates were regulated by the Universal Postal Union (UPU). The UPU rates came into effect on April 1, 1879. For just over 13 years, the single letter rate was 4d per half ounce. The first two covers both illustrate this rate, and were sent from Lagos to Germany on March 5, 1888 and from Lagos to Berne, Switzerland March 18, 1891. These covers also illustrate representative cross section of nearly all of the Lagos markings that were in use during the period from 1888 to 1903: from Proud type K3, K4, and K5 barred ovals, to D8, D10 and D13 CDS cancels, to R5 Registration markings. 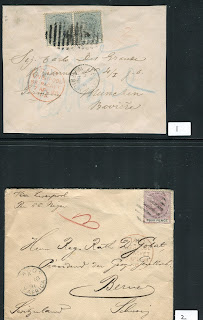 11.       Sent from Lagos to Munich on March 5, 1888. The 4d rate is paid with a pair of the 2d slate grey keyplate definitive. This is a slightly late use of this stamp, given that the 2d lilac and ultramarine had replaced it in March 1887. Both covers are rated “3” in red on the front, which represents the portion of the postage from Lagos to Germany. The stamps are tied with Proud type K3 9 bar oval obliterator and a strike of the Proud type D8 CDS cancel. 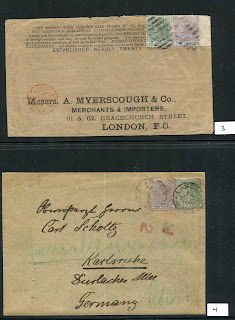 On July 19, 1892, the single weight letter rate was reduced to 2½d per half ounce to all non UK countries, whereas that rate for the UK came into effect in 1891. The next two covers illustrate this rate change.
13.       Sent from Lagos in October 1896 to London. The 2½d rate has been paid with a single 2d lilac and ultramarine and a ½d dull green. The stamps are tied by two strikes of Proud type K5 8-bar oval. Interestingly this cover is a business reply envelope for Myerscough & Co. which were stamp dealers in London. The envelope shows a printed appeal on the top of the envelope to the sender to cover the envelope with stamps.
24.       Sent from Lagos on November 30, 1901 to Germany. The 2½d rate is paid with the same combination of stamps as the third cover. This cover is rated “2” in red, representing the portion of the postage that applied from Lagos to Germany. The stamps are tied by Proud type D13 CDS cancel. 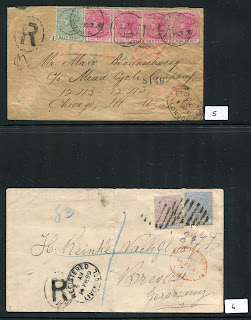 Registration during this period was 2d, in addition to the normal applicable postage. Covers 5 and 6 provide examples of registered single letters sent to Germany and the U.S. between 1899 and 1903. Both covers show clear strikes of the Proud type R5 registration marking.
15.       Sent from Lagos in February 1903 to Chicago, Illinois. The 4½d rate is paid with two pairs of the 1d carmine and a single ½d dull green.
26.       Sent from Lagos on January 21, 1899 to Breslau, Germany. The 4½d rate is paid with a single 2d lilac and ultramarine, plus a 2½d ultramarine. The stamps are tied by two strikes of Proud type K5, 8-bar oval obliterator.